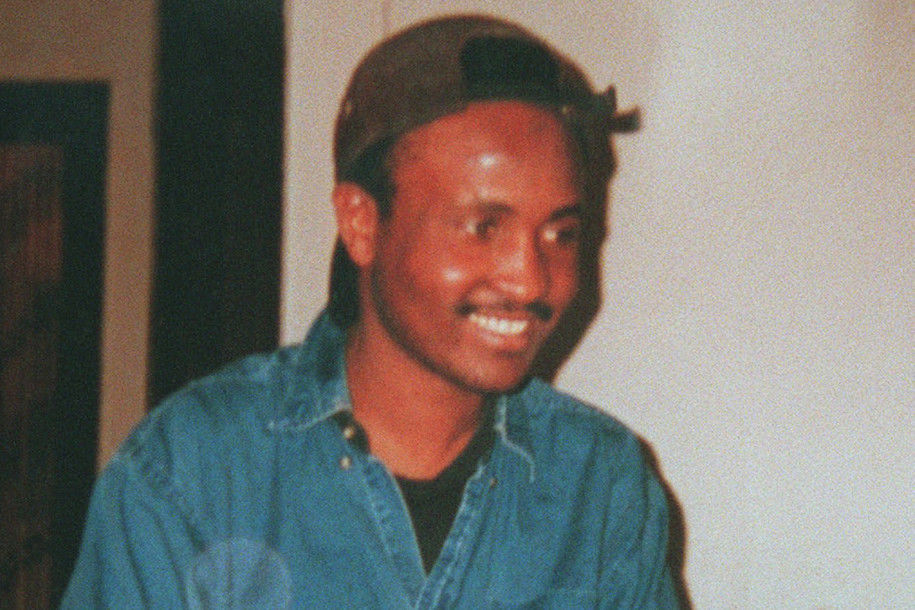 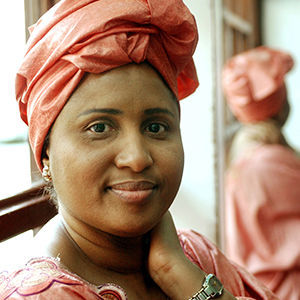 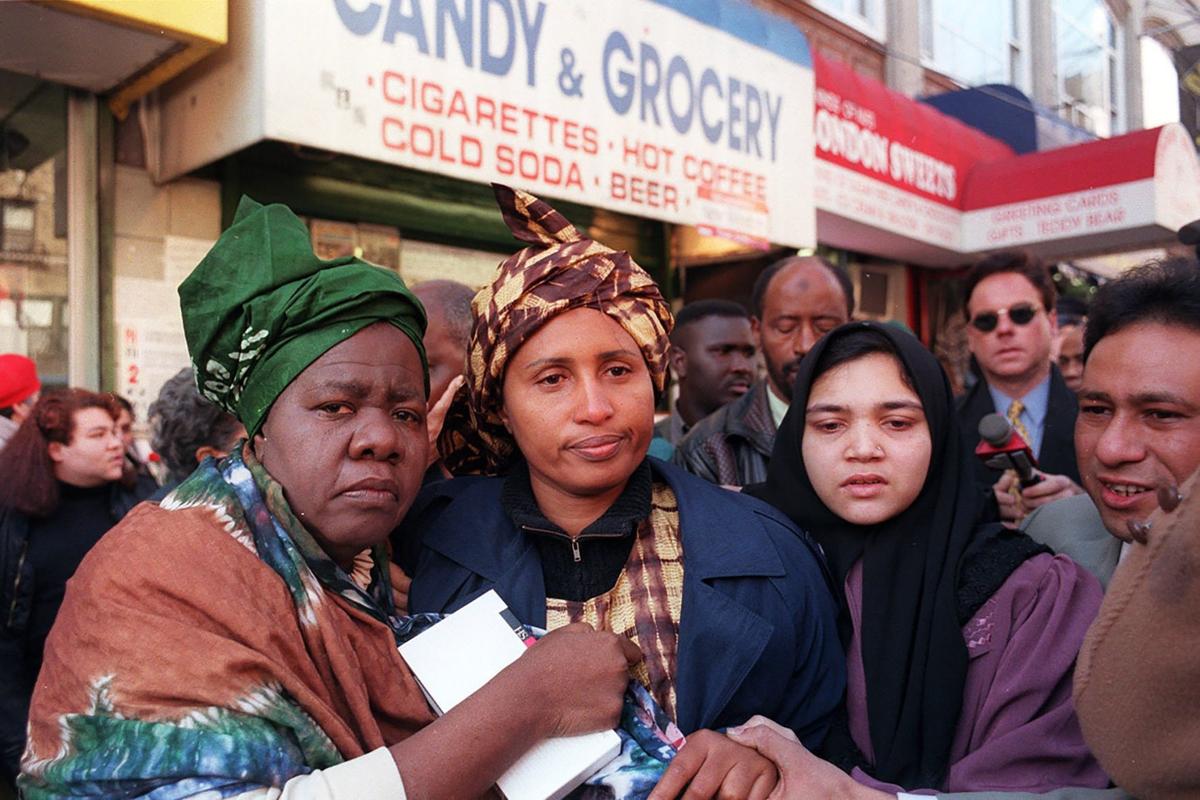 Kadiatou Diallo, center, came to New York from Guinea after her son, Amadou, was killed in 1999. The Eric Garner case brings painful reminders.

Kadiatou Diallo, center, came to New York from Guinea after her son, Amadou, was killed in 1999. The Eric Garner case brings painful reminders.

NEW YORK — In the months after her son was killed in the Bronx by four police officers, she was consumed by grief each time she walked the unfamiliar streets of New York City. She wept often.

While riding the subway, she would think, “Did he take this train when he was alive?”

But now, 20 years after that life-altering event, the woman, Kadiatou Diallo, no longer dreads visits to the city. She comes to New York at least once a year to advance her charity and advocacy work or to spend time with other mothers who have also lost children in law enforcement-related incidents — a support system she didn’t have two decades ago.

“She’s my hero,” said Valerie Bell, the mother of Sean Bell, who was killed by police officers in Queens in 2006, hours before his wedding. “What she went through, and to stand firm for her son, she’s still doing it now.”

On Tuesday, Diallo paused for a few seconds during a telephone interview after she was told the breaking news that the Justice Department would not prosecute a New York City police officer accused of killing Eric Garner five years ago in Staten Island.

Diallo recalled the infamous video showing Garner being put in a chokehold by officer Daniel Pantaleo during his arrest and uttering the phrase, “I can’t breathe,” 11 times before his death.

“The world has watched those images,” Diallo, 59, said from her home country, Guinea, in western Africa, where she was doing charity work. “I remember when that happened, I saw the video. I was down on the floor. It was so shocking and difficult to watch.”

It was a painful reminder of what she had experienced.

On Feb. 4, 1999, her son, Amadou Diallo, was killed in the vestibule of a Bronx apartment building by four New York Police Department officers who had been searching for a suspect in a rape case. The officers — who fired a total of 41 shots — said they believed Diallo, 23, had reached to grab a gun when they approached him. Instead, Diallo had grabbed for his wallet.

The president of the NAACP at the time, Kweisi Mfume, called the shooting “excessive force at its worst.” Diallo’s death led to protests in the city, resulting in a politically fraught time for former Mayor Rudy Giuliani.

Nearly 14 years before the start of the Black Lives Matter movement, Diallo’s death became the rallying cry for those who believed the Police Department operated with racial bias.

Kadiatou Diallo arrived into this tense environment from Guinea five days after her son was killed. She cried his name while being helped to the crime scene by the authorities. The young mother was immediately immortalized in New York newspapers and on television and computer screens. She toured the country with the Rev. Al Sharpton, decrying police brutality.

But Diallo soon appeared hesitant to become a symbol for a narrative she did not totally understand.

“I didn’t even know about race issues,” Diallo said. “Everything was happening so quickly. I didn’t have that someone who went through that experience. But I was able to stand up and just speak for my child. It was an awakening for me.”

She had a reported rift with Sharpton, partly regarding who would represent her in a lawsuit against the city and the officers. The pressure on her to fight for a larger cause was immense. Diallo just wanted to move on, heal and seek reconciliation with the mayor and the Police Department.

“I came back to my senses, because the anger and the agony were gone,” she told The New York Times Magazine in early 2000. “I don’t want to do that anymore — the speeches and things.”

Instead, she started the Amadou Diallo Foundation.

The four officers involved in the shooting were indicted almost two months after the shooting. But in February 2000, a jury acquitted them of all charges.

Diallo and her ex-husband received a $3 million settlement in 2004 to their lawsuit against the city and the officers. Kadiatou Diallo was given half.

After the settlement, she completed a memoir, “My Heart Will Cross This Ocean,” built a school in her son’s name in Guinea and ran the foundation.

In the 20 years since her son’s killing, Diallo has become the type of leader many had wanted her to be in the months after the shooting, and she’s done it with little or no publicity. She’s also mended her relationship with Sharpton.

When he holds events about policing, “he always reaches out to me,” she said. “We also have a relationship, personally, because I attended his daughter’s wedding. On Mother’s Day, he always calls me.”

She has also befriended people like Gwen Carr, Garner’s mother. Diallo said Tuesday that she planned to call her to offer support.

“I know what Gwen is going to tell me: ‘Kadi, I’m ready to fight this. I cannot give up,’ ” Diallo said.

She added: “Our sons haven’t received justice that they deserve to have. All we want is good policies, good laws to be passed, and if someone did wrong — they have to be accountable for what they did.”

Diallo is also involved with the Justice Committee, a New York grassroots advocacy group. One of its efforts is a campaign urging Gov. Andrew M. Cuomo to sign an executive order to appoint a special prosecutor to handle cases like Garner’s.

“It’s a setback, but it gives us more strength to carry on to change,” she said of the ruling regarding Garner’s case. “The history of the civil rights didn’t happen overnight. This is our new civil rights.”

Diallo attended Garner’s funeral in 2014, but personally met Carr later that year at Riverside Church in Harlem, when both women were on a panel. Carr, in an interview earlier this year, said that she felt “a real connection” to Diallo immediately, and that they have talked every week since.

Carr said she appreciated Diallo’s presence after her son’s death. “I was in a dark place,” she said.

Carr said she vividly remembered following the news of Amadou Diallo’s death and its aftermath, watching and reading about how Kadiatou Diallo navigated the chaotic time.

“I remember hearing one of my friends say, ‘That is such a tragedy. I will never carry a wallet again,’” Carr said. “That wrenched my heart. I had such sympathy for her.”

Diallo runs her foundation on her own, though a consultant helps to organize an annual fundraiser.

The night before her son’s death, Diallo said she spoke to him by phone. “Mom, I’m going to college!” she recalled him announcing. (She acquired a trademark on that phrase, and has used it for the foundation.)

Diallo was in New York earlier this year to preside over the first three scholarships awarded by her foundation to students at Guttman Community College in Midtown Manhattan who plan to pursue computer-related careers, just as Amadou had hoped to do.

Diallo said she has never felt “revengeful” toward the police.

“Let’s move forward in one direction and fight for this good fight so we can save the children. That was my mission,” said Diallo, who has a daughter and two other grown sons and is a grandmother of three.

“That’s what I still do. The other people who were cynical then, how do they see me now? This is 20 years later. I didn’t run from it. I stay the course and I do what I can without bashing the police, without being revengeful.”

US prosecutions not easy in police shootings

WASHINGTON — As the U.S. Justice Department probes the police shooting of an unarmed 18-year-old African-American in Missouri, history suggest…

NEW YORK — In a reckoning five years in the making, an administrative judge on Friday recommended firing a New York City police officer over t…