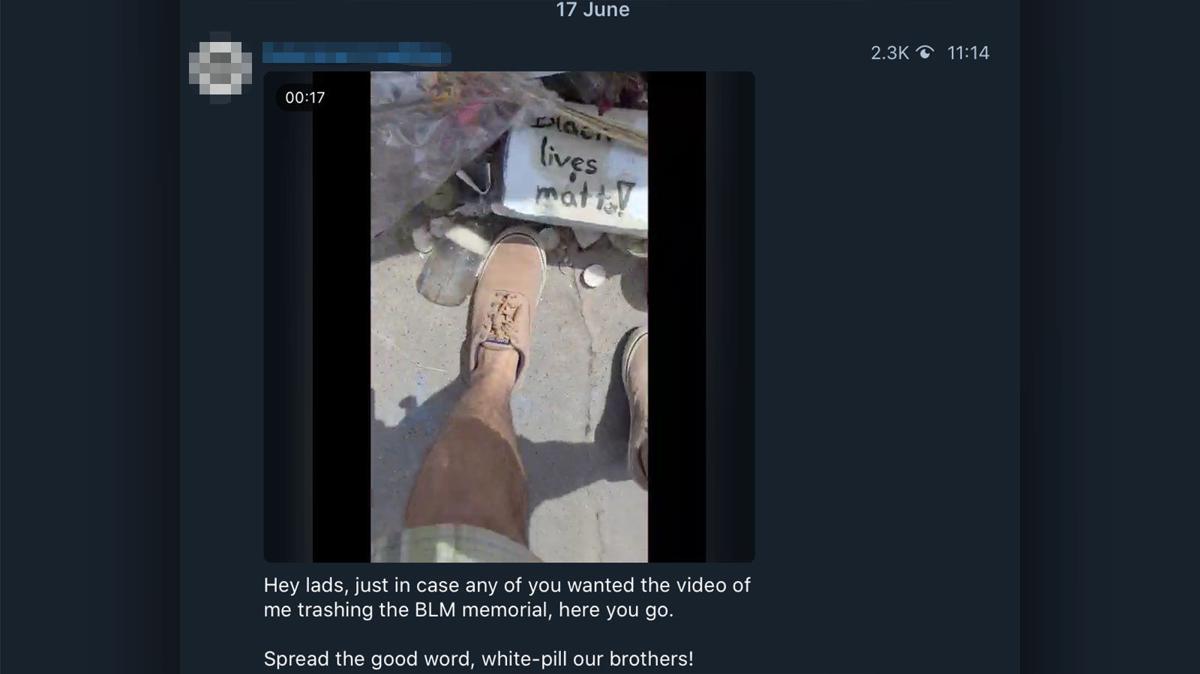 A man is seen “trashing” a Black Lives Matter memorial in a screengrab from a video shared on one of more than 200 white supremacist Telegram groups that have become much more active during protests across the U.S. CNN has obscured identifying information in this image. — Images obtained by CNN 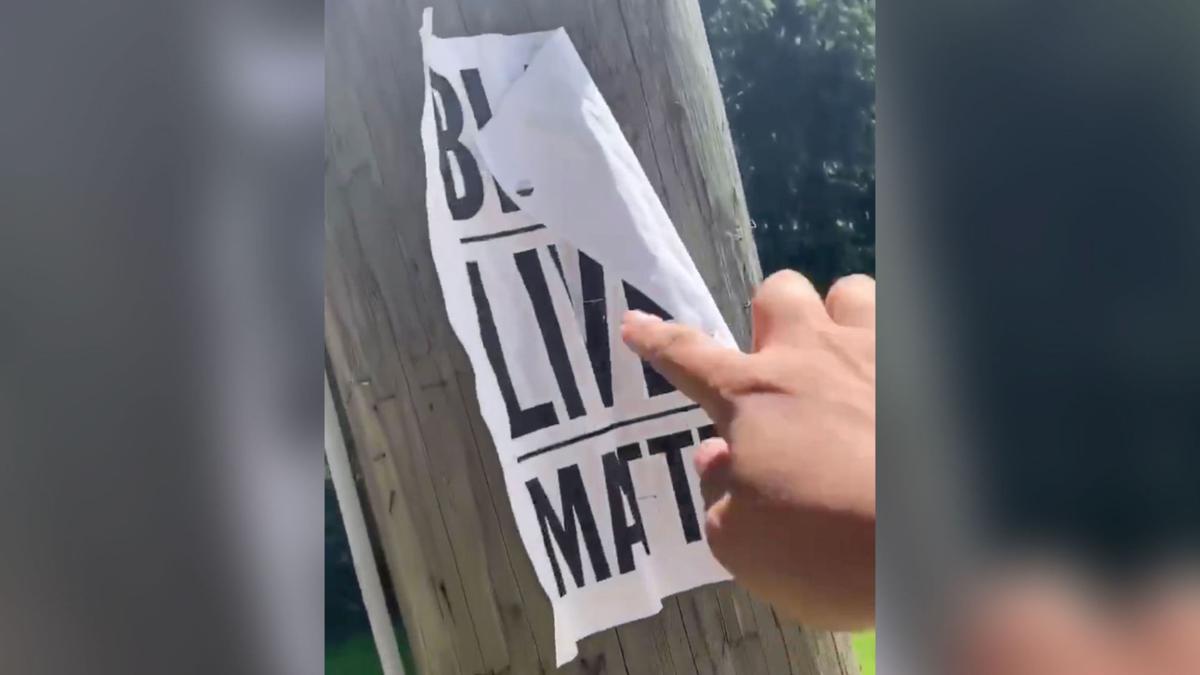 A screengrab from a video in which a far-right group member rips a Black Lives Matter poster from a tree.

A man is seen “trashing” a Black Lives Matter memorial in a screengrab from a video shared on one of more than 200 white supremacist Telegram groups that have become much more active during protests across the U.S. CNN has obscured identifying information in this image. — Images obtained by CNN

A screengrab from a video in which a far-right group member rips a Black Lives Matter poster from a tree.

On June 5, a car full of white supremacists drove through the streets of Knoxville, Tennessee, harassing and abusing people attending a Black Lives Matter protest. One of those in the car shouted to a group of protesters: “You wanna die? Come on in. 9mm with your name on it.”

The occupants of the car recorded several videos as they went — videos that were later uploaded to the encrypted messaging app Telegram. One of the channels they used was the Fascist Group Esoteric Anti Root Collective — one of more than 200 white supremacist Telegram groups that have become much more active in the midst of protests across the United States, according to CNN analysis.

According to a new report by the Institute for Strategic Dialogue (ISD) — shared exclusively with CNN — these channels have thousands of members. The ISD, a London-based think tank studying extremism, says they include frequent and explicit threats of violence against minority communities and BLM protesters — threats that in some cases have translated into violence.

In May, the white supremacist group Rise Above Movement launched its own Telegram channel, which, according to the Countering Extremism Project, features anti-Semitism and anti-migration themes.

White supremacists have migrated to Telegram because it’s less active in moderating content than other social media networks, according to ISD and other researchers. The channels share everything from manuals on how to manufacture 3D guns to praise for mass killers.

A Telegram spokesperson told CNN via e-mail: “Telegram is a neutral platform used both by Black Lives Matter and their opponents, as well as by thousands of other political movements around the globe. Our mission is to support privacy, free speech and peaceful exchange of ideas. Calls to violence are not welcome on our platform.

“Telegram allows users to report public calls for violence. Our moderators routinely take down posts violating our Terms of Use — and block channels that are made up entirely of such posts.

“Users who encounter calls to violence on Telegram are advised to report them using the in-app reporting button or to abuse@telegram.org.”

The ISD analyzed more than 1 million individual posts on Telegram among dozens of white supremacist channels. Those channels, with names like “Only White Lives Matter” and “Hans’s Right Wing Terror Center,” had an average of 1,773 members.

Jakob Guhl, lead author of the study, told CNN: “They’re very large if you take into account quite how egregious the content is: its calls for violence, promotion of terrorist groups, celebration of the attacks of lone-actor terrorists.

“I mean, this is not exactly gray zone content,” Guhl said.

Capitalizing on a crisis

Among the disturbing trends identified by ISD is a growing crossover between white supremacists and the Boogaloo movement, a loose-knit group of heavily armed, anti-government extremists that advocates for civil war in the U.S.

Boogaloo’s profile has risen sharply during the coronavirus pandemic, especially as it has tried to prevent states from enforcing lockdowns. Some of its members have also conspired to disrupt or attack BLM protests, according to CNN analysis.

Guhl says the pandemic “plays into some of the accelerationist narratives that there will be a breakdown of society which will eventually lead to a race war through which the whites will be victorious and able to establish a white ethnographic state,” he told CNN.

Boogaloo supporters appear to be divided along ideological lines: some describe themselves as anarchists and disavow white supremacy, while others embrace anti-minority rhetoric.

But more than half the channels identified by ISD include references to a second civil war, a sign that the Boogaloo movement is melding with other extremist groups and mobilizing across platforms.

One image shared on Telegram shows profiles of a Boogaloo member and a far-right militia member wearing a skull facemask, with the caption: “I have your back and you have mine. Unite the right against the parasite.”

CNN reviewed dozens of such images on Telegram channels. All of the channels appear to be gaining momentum because of the widespread protests in the U.S., countering with slogans such as “Black Crimes Matter” and “Make America White Again.”

“These extremist groups are definitely energized by this,” says Guhl. “They think this is a moment around which they can mobilize people who are spending more time inside because of the lockdown, and more time on social media. The distance between far-right communities and these accelerationist [movements] becomes a little closer.”

How to manufacture a 3D gun

Some 60% of the far-right Telegram channels analyzed explicitly support political violence, either through the promotion of instructional material to prepare for violence or direct calls to action.

Valerio Mazzoni, terrorism analyst for the Italian consultancy IFI Advisory, told CNN he’d witnessed during lockdown an uptick of the sharing of manuals on Telegram channels — on how to manufacture a 3D weapon, guerrilla tactics and IEDs, for example.

“The administrators of these groups have boosted this kind of activity, thinking to engage their users at home, and this was a good occasion in order to prepare them for the Boogaloo [the final battle],” he said.

The ISD and many others who have researched in this field say white supremacists also frequently glorify or share videos and manifestos of lone-actor terrorists, who are worshiped as “heroes.” One Telegram channel even compiled a list of terrorist “saints” from around the world, including the Charleston church shooter Dylan Roof — referred to as “Saint Roof” in several memes — to Brenton Tarrant, the Christchurch mosques attacker.

The ISD found that white supremacist content is very quickly shared, suggesting these channels are densely interconnected: 205 out of the 208 channels identified by ISD linked to one another. The institute first identified 18 Telegram channels associated with white supremacist mobilization by searching the platform for hate groups and terminology used by them, according to the report. Then, it employed a “snowball” methodology, whereby the search expanded and identified an exponential number of likeminded accounts by going through posts.

Some channels have even called on followers to write letters to imprisoned white supremacists or send them gifts.

But the recent social unrest has transformed conversations on Telegram into plans for action on the streets. CNN monitored more than 60 far-right Telegram channels where racist and violent thought was regularly promoted and found that several users were seeking out BLM protests and gathering for their own events.

Besides the Knoxville incident early in June, other videos and images uploaded to Telegram showed the destruction of BLM memorials as well as BLM stickers being ripped from trees and replaced with white supremacy stickers.

Some of the more troubling content on the Telegram channels appears to show preparations for violence. A few videos show users throwing knives in woodland areas and brandishing chainsaws. Another showed a photograph of a rucksack with the suggestive caption: “It didn’t have to be like this.”

While most of the channels feature U.S. extremists, CNN located users in the United Kingdom who had shifted their anger from Telegram to the streets. One account depicted a man harassing another individual at a British train station whom he believed belonged to “Antifa,” while several channels showed white nationalist stickers posted at various locations.

Given the extremist nature of the content, and growing evidence that it is translating into action, experts have called into question Telegram’s ability to moderate its own platform.

The ISD report argues that not only is Telegram failing to enforce its content moderation policies but that those policies are far too limited. As a result, Guhl argues, Telegram has become “a safe space for hate and safe space to inspire violent attack.”

It has created a channel to combat use of the app by ISIS, and European officials have said that Telegram has helped in removing jihadi content. On its website Telegram says: “While we do block terrorist (eg ISIS-related) bots and channels, we will not block anybody who peacefully expresses alternative opinions.”