Selina Norris Gray, right, enslaved by the family of Gen. Robert E. Lee, was given responsibility for the mansion’s care. She is believed to have preserved artifacts of George Washington that belonged to Lee’s father-in-law. MUST CREDIT: National Park Service handout 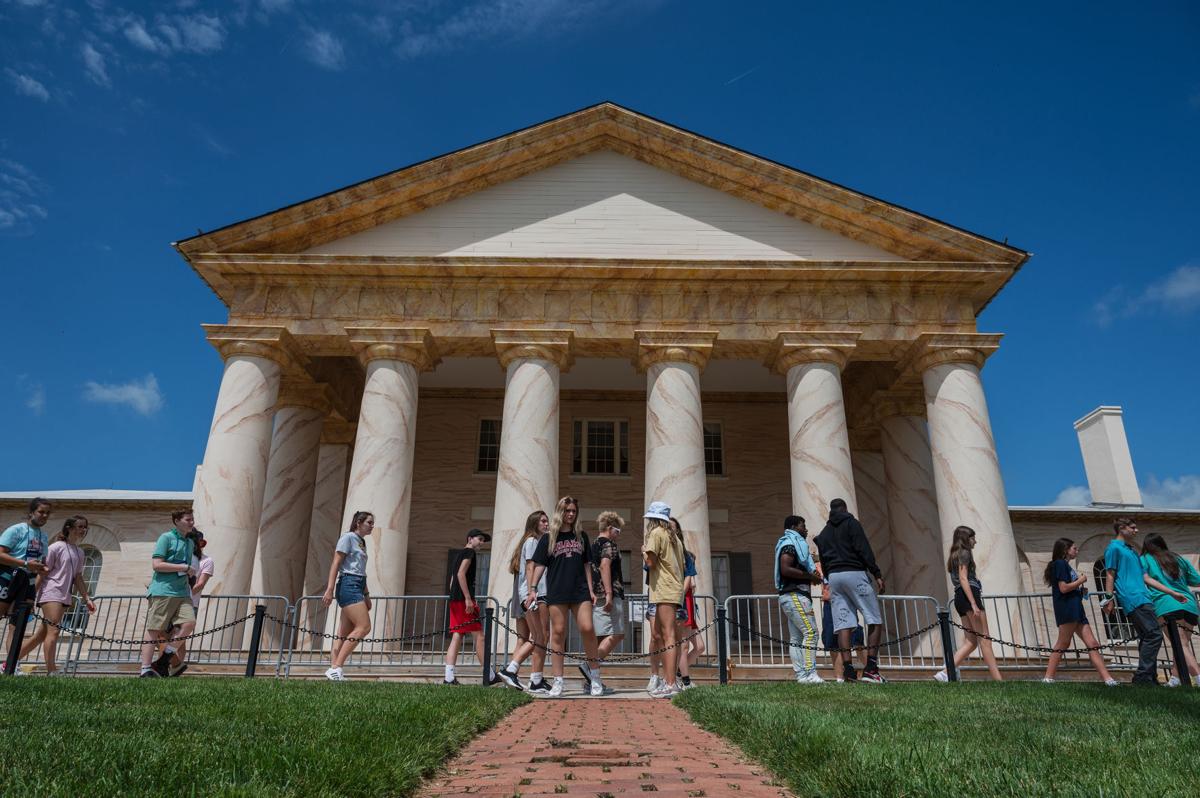 A tourist group walks past the portico of Arlington House, which will reopen Tuesday after a $12 million renovation. MUST CREDIT: Photo for The Washington Post by Craig Hudson

Selina Norris Gray, right, enslaved by the family of Gen. Robert E. Lee, was given responsibility for the mansion’s care. She is believed to have preserved artifacts of George Washington that belonged to Lee’s father-in-law. MUST CREDIT: National Park Service handout

A tourist group walks past the portico of Arlington House, which will reopen Tuesday after a $12 million renovation. MUST CREDIT: Photo for The Washington Post by Craig Hudson

ARLINGTON, Va. - The four bottles were buried together in a pit near the fireplace in the quarters of the enslaved maid servant.

Part of the dirt floor had been excavated, and the bottles - each one different - had been placed side-by-side, all pointing north, toward freedom. A bone fragment from a goat or a sheep had been placed inside one.

Outside stood Arlington House, with its glittering dining room and columned portico overlooking the plantation, the Potomac River and the unfinished Washington Monument in the distance.

Two ways of life: One of freedom and privilege, the other of bondage and symbols buried in the earth by the fireplace.

On Tuesday, the historic mansion in Arlington National Cemetery reopens after a renovation that has recaptured the glory of the house, along with clues to the secret lives of the enslaved Black people who were the main occupants of the land where it stood.

Even as experts gathered mementos of Confederate Gen. Robert E. Lee, who lived in the house, and his father-in-law, George Washington Parke Custis, who had it built, they found the mysterious folk elements buried by the enslaved.

The discovery is rare and the first of its kind at Arlington, said Matthew Virta, a National Park Service archaeologist and cultural resources manager.

"It gives a voice to those who have been almost invisible in history and helps to demonstrate their humanity, their links to their past . . . and their hopes for the future," he said.

More than 100 Black people lived at Arlington over the years, while about a dozen White people did.

The bottles were probably placed around the 1850s, Virta said. Enslaved people had been held at Arlington for decades, and had built the house. Several had tried to escape, but were caught, brought back and whipped.

"These can be called 'conjure bottles,' if you will," he said. "A lot of folks are familiar with the term, 'witching bottle,' where there's actually things inside the bottles . . . meaning different things. That has carried through the ages."

The meaning of the animal bone, in what may have been a large ink bottle, is unknown, Virta said. There could be some residue, and, perhaps, DNA. But "that's a long shot," he said.

"Why were these things put there?" he said. "Under what circumstances?"

"We may never know exactly why," Virta said. It may have a "ritual" connection to African traditions of burying sacred objects "in what is essentially a type of shrine."

It may have been the only way those in bondage could express hope.

The three-year Arlington restoration was funded through the National Park Foundation with a $12.35 million donation from Washington-area billionaire philanthropist and businessman David M. Rubenstein.

"They did a spectacular job," Rubenstein said last week. "I've seen restorations over the years and rehabilitations of historic homes, but this is one of the best."

The site's two outbuildings where the enslaved lived have been restored to their original design, and doors, windows and exterior stucco have been rehabilitated.

And the Park Service has gathered in new museum spaces artifacts representing the Black and White families that shared Arlington for three generations.

The "witching bottles," which are still being studied and are not yet on display, were unearthed in the Spring of 2019 in the dwelling occupied by the family of Selena Norris Gary, the maid servant of Mary Anna Randolph Custis Lee.

Mary Anna Lee, the daughter of the elder Custis, was the wife of Robert E. Lee, the famous U.S. Army officer who ran the plantation after Custis died and later joined the Confederate rebellion.

Gray would become a key figure in the story of the house - protecting precious artifacts after the Lees vacated Arlington during the 1861-1865 Civil War, and the site was occupied by Union soldiers.

The Army later turned the plantation into the famous cemetery that now surrounds the house.

Among the Lee pieces to be displayed is a draft of the letter, written in Arlington House eight days after the war began, in which he resigned from U.S. Army.

A native of Virginia, and a highly regarded career officer, he had been offered command of the U.S. forces, according to the Park Service. He declined. "Save in defense of my native state shall I ever again draw my sword," he wrote.

He would shortly draw it on behalf of the Confederate forces, and help lead the doomed fight to maintain slavery.

Also on exhibit are Lee's chess set, a lock of his hair, a piece from the mane of his horse, Traveller, and a revolver, engraved with his name, given to him by the faculty of the U.S. Military Academy at West Point, where he was superintendent from 1852 to 1855.

In another museum space is a hand bell probably used to call in workers, an African-style mortar and pestle to grind herbs and spices, and a fireplace tool from the Gray family's hearth.

There is also a letter written from Arlington by now free Selena Gray to her former mistress, Mary Anna Lee, in Lexington, Va., seven years after the war. "The place is changed so you would hardly know it," Gray wrote.

She included a memento, a rose bud that Mary Lee had planted on the grave of her mother who had died at Arlington almost 20 years before.

The Greek revival building has been closed since March 2018. It reopens Tuesday at noon.

It was built with handmade brick and covered with cement. It was then painted and scored to look like marble and sandstone. It has eight, 23-foot-tall columns that are five feet in diameter at the bottom.

Park ranger Aaron LaRocca said it was inspired by the Temple of Theseus in Athens.

The elder Custis, who had it built, was the grandson of Martha Washington from her first marriage. After his father died in 1781 he was brought to Mount Vernon, where he was raised as a son by George and Martha Washington.

He grew to idolize George Washington and had Arlington built in part as a memorial to the nation's first president.

The site is also important because it still has "the footprint" of two quarters of the enslaved, said Charles Cuvelier, the superintendent of the park service's George Washington Memorial Parkway, which includes Arlington House.

On other historic plantations, "most of the enslaved communities were destroyed," he said. "The buildings were either removed and or subject to decay."

Rubenstein, the donor, said Thursday that when he toured the house in 2014, "it was not in such good shape, to put it politely. I thought it needed a lot of work. So I said l would put up the money to make it better and more real."

The site is still called "Arlington House, The Robert E. Lee Memorial," but Rubenstein has argued for eliminating Lee's name.

"I've always had some hesitancy about being associated with the name Robert E. Lee," he said. "Here is a house . . . [amid] the most sacred land in the country. And should it be a monument to Robert E. Lee? I don't think so."

Lee was commander of the Confederacy's Army of Northern Virginia, which won a string of bloody victories over Union forces until it was overwhelmed in 1865 and Lee was forced to surrender.

But after the war he became a hero of the so-called "Lost Cause" in the South. Statues of him were erected, and roads and schools were named for him.

But with the rise of racial justice movements like Black Lives Matter, he has been seen as a leading military defender of slavery.

In December, Rep. Don Beyer, D-Va., sponsored a resolution that would eliminate Lee's name from the landmark, calling it just Arlington House.

A spokesman for Beyer said last week that the resolution was introduced too late in the session to pass.

It will be reintroduced when the timing is right, he said.