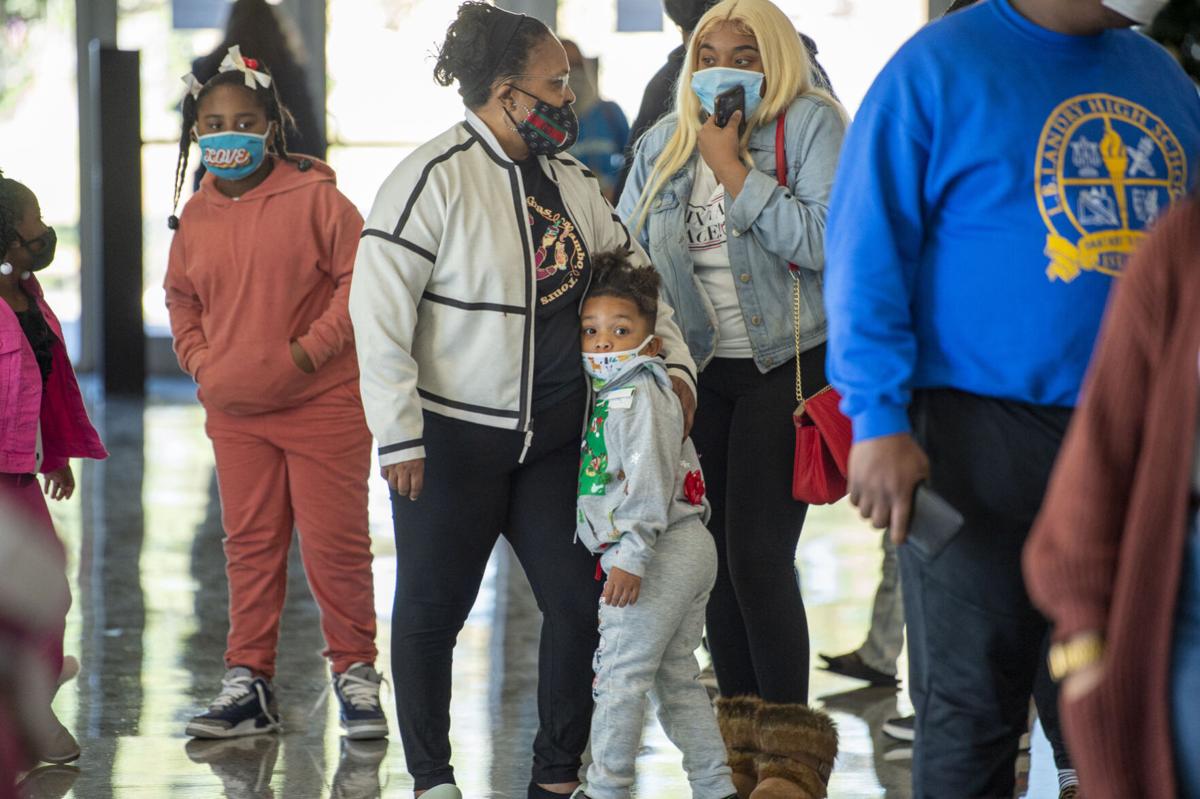 Parents, students and faculty at L.B. Landry High School in the Algiers neighborhood of New Orleans wait in line to be tested for COVID-19 on Monday. —PHOTOS: Chris Granger/The Times-Picayune/The New Orleans Advocate via AP 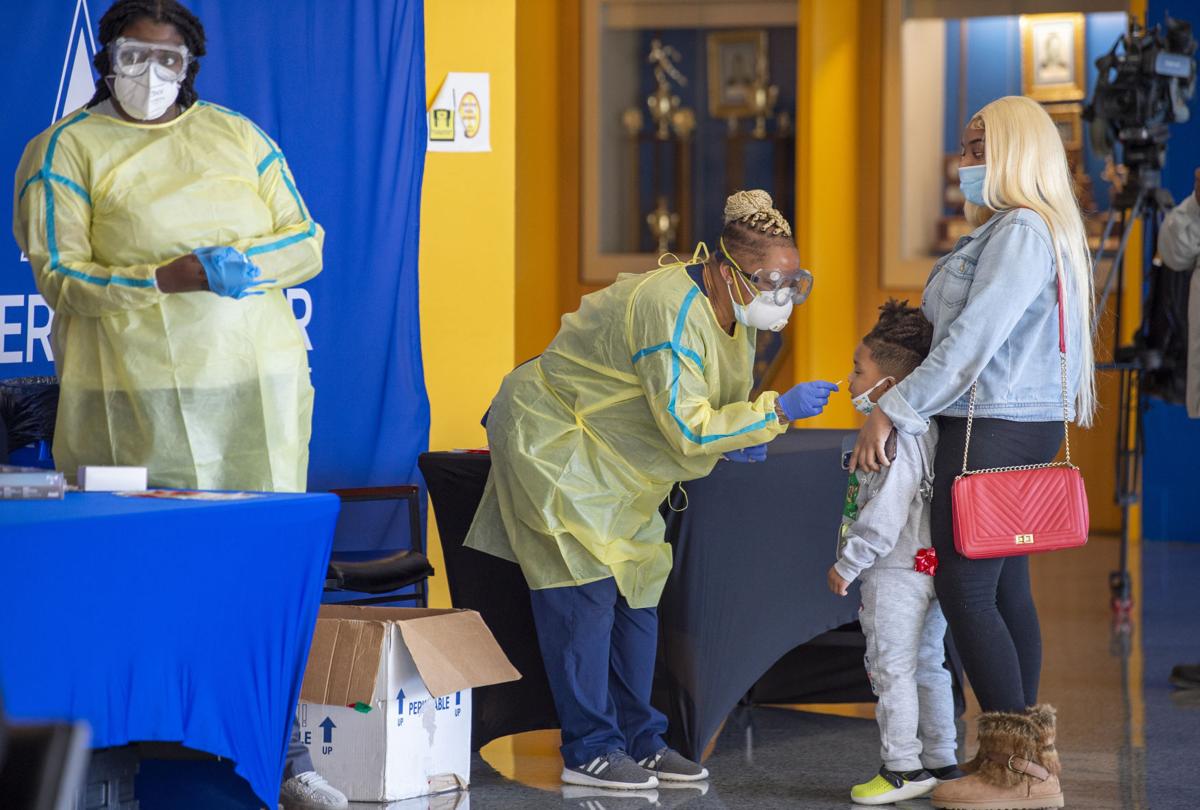 COVID-19 tests are administered to children on Monday at L.B. Landry High School in New Orleans. 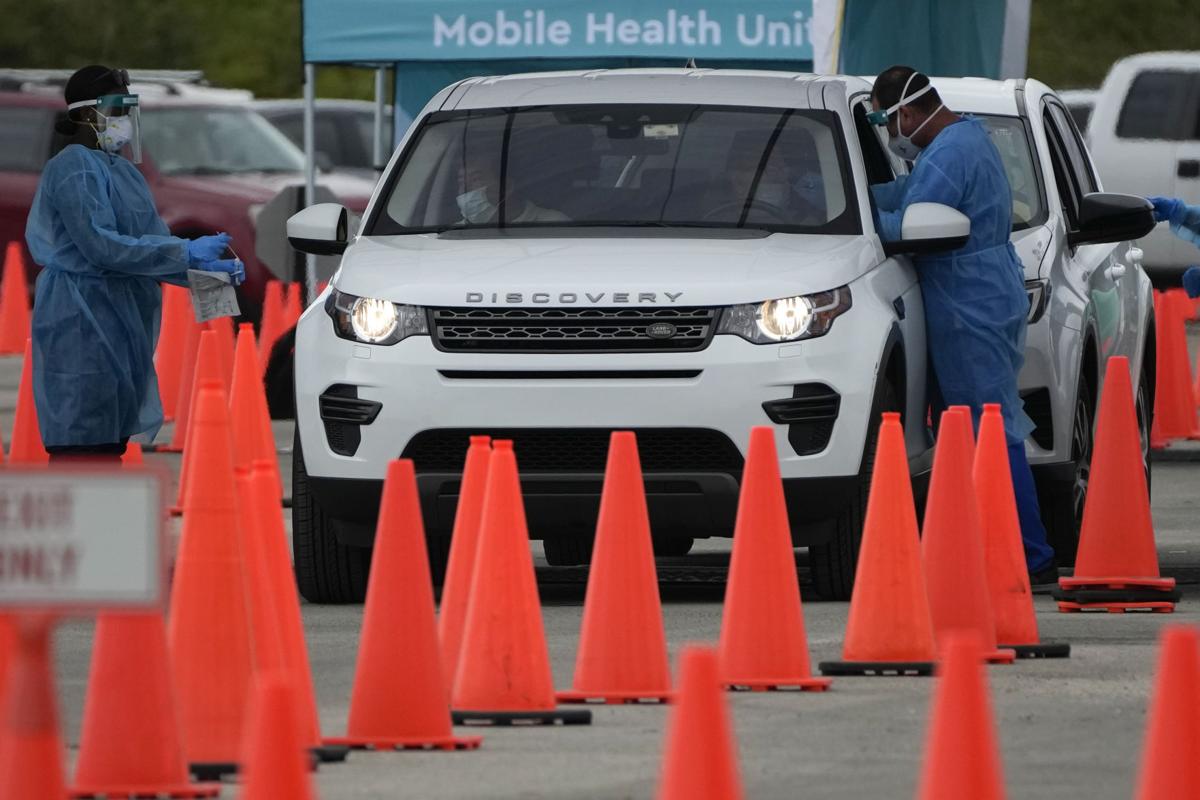 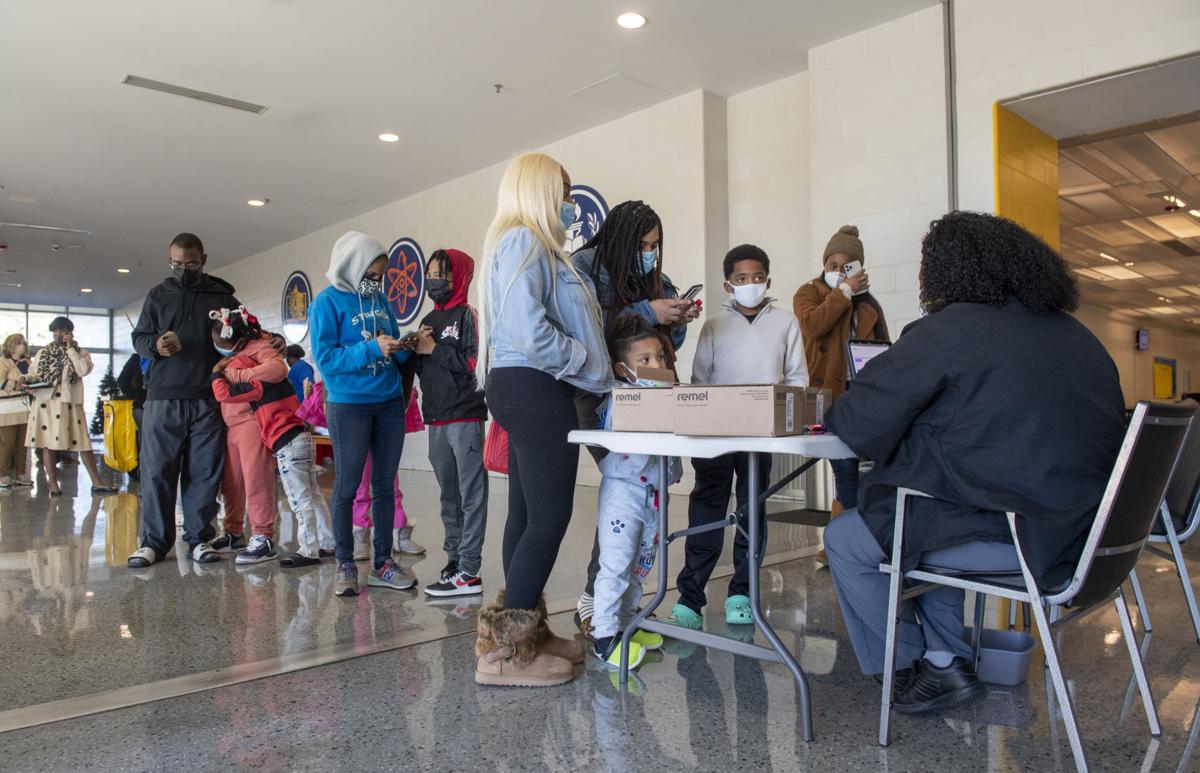 Parents, students and faculty at L.B. Landry High School in New Orleans wait in line to be tested for COVID-19 on Monday. —Chris Granger/The Times-Picayune/The New Orleans Advocate via AP 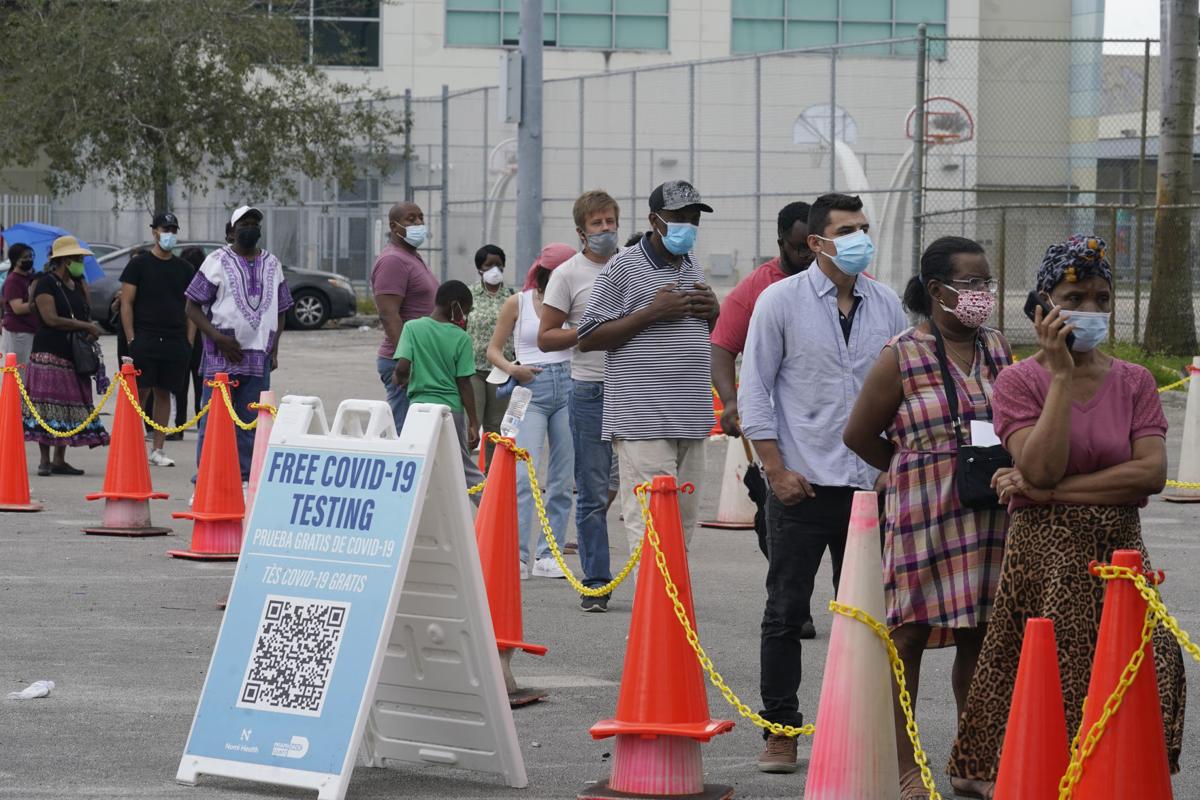 People wait in a long line to get a COVID-19 test on Monday in North Miami, Fla. —AP Photo/Marta Lavandier 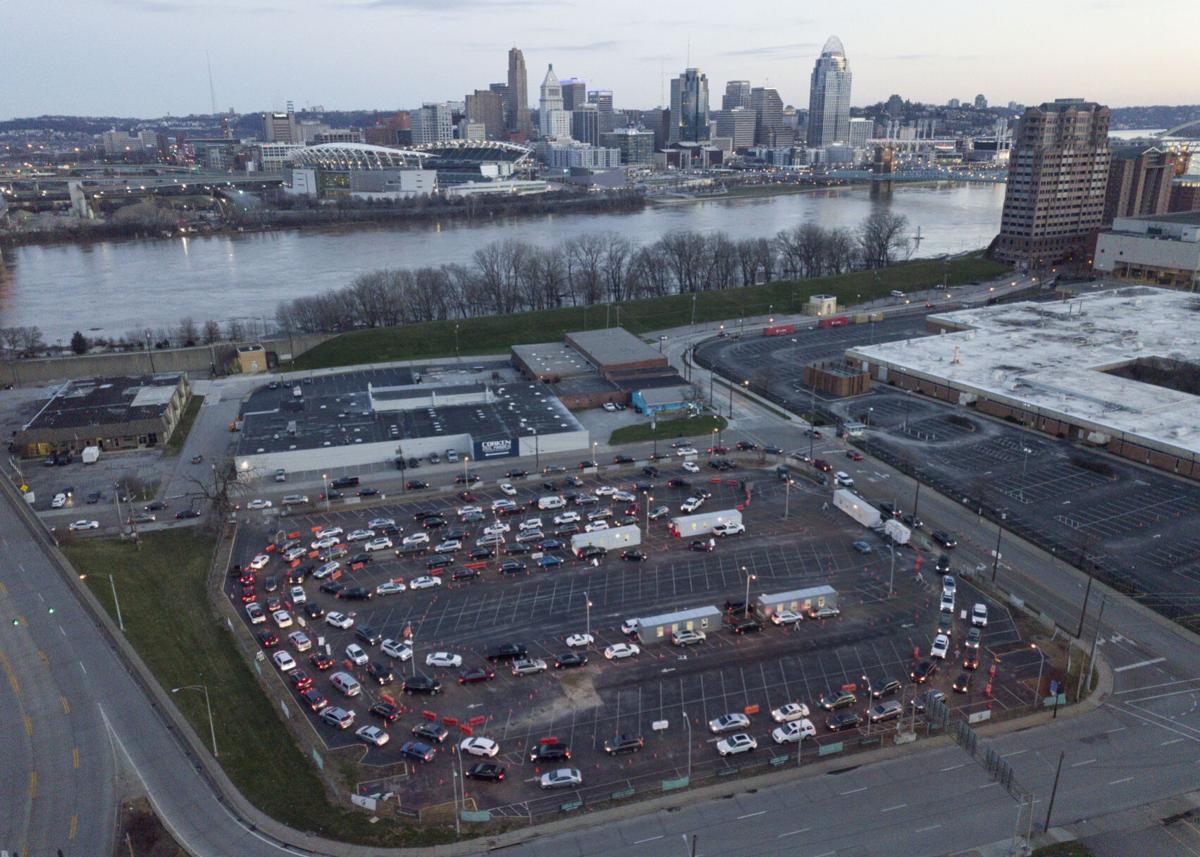 Cars line up around the block at a COVID testing site across the river from downtown Cincinnati in Covington, Ky., on Monday. —AP Photo/Jeff Dean

Parents, students and faculty at L.B. Landry High School in the Algiers neighborhood of New Orleans wait in line to be tested for COVID-19 on Monday. —PHOTOS: Chris Granger/The Times-Picayune/The New Orleans Advocate via AP

COVID-19 tests are administered to children on Monday at L.B. Landry High School in New Orleans.

Parents, students and faculty at L.B. Landry High School in New Orleans wait in line to be tested for COVID-19 on Monday. —Chris Granger/The Times-Picayune/The New Orleans Advocate via AP

People wait in a long line to get a COVID-19 test on Monday in North Miami, Fla. —AP Photo/Marta Lavandier

Cars line up around the block at a COVID testing site across the river from downtown Cincinnati in Covington, Ky., on Monday. —AP Photo/Jeff Dean

The School District of Philadelphia is among the school systems around the U.S. switching back to online learning for 77 schools because of the explosion in COVID-19 cases.

Other school districts in the country extended their holiday break Monday or switched back to virtual learning because of the rise in cases, while others pressed ahead with in-person classes amid a seemingly growing sense that Americans will have to learn to co-exist with the virus.

Caught between pleas from teachers fearful of infection and parents who want their children in class, school districts in cities such as New York, Milwaukee, Chicago, Detroit and beyond found themselves in a difficult position midway through the academic year because of the super-contagious omicron variant.

Philadelphia schools Superintendent William Hite posted on the district website Monday evening: “District leaders have been meeting regularly with local health officials to monitor the COVID-19 situation, and we’ve also been closely tracking data to determine COVID’s impact on staff coverage in schools. We will continue to do this and make school-by-school decisions in the best interests of our students and staff. Based on the latest data as of this evening, we are making the following updates to our plan for the return to school: 77 schools will be temporarily shifting to 100% virtual learning starting Tuesday, January 4th through at least Friday, January 7th, 2022.”

Prior to Hite’s decision, the head of the city’s teachers union called for the school district of Philadelphia to go remote temporarily so that it has time to ensure COVID-19 mitigation strategies are in place before students and staff return from the holiday break.

Jordan said he believed the district needed to pivot to virtual instruction for a week while it makes sure its safety measures are completely in place.

New York City, home of the nation’s largest school system, reopened classrooms to roughly 1 million students with a stockpile of take-home COVID-19 test kits and plans to double the number of random tests done in schools.

“We are going to be safe, and we will be open to educate our children,” newly sworn-in Mayor Eric Adams said on MSNBC.

New Yorker Trisha White said that she feels the risk is the same for her 9-year-old son in or out of school and that being with classmates is far better for him than remote learning.

“He could get the virus outside of school,” she said as she dropped the boy off. “So what can you do? You know, I wouldn’t blame the school system. They’re trying their best.”

While the teachers union had asked the mayor to postpone in-person learning for a week, city officials have long said that mask requirements, testing and other safety measures mean that children are safe in school. The city also has a vaccination mandate for employees.

Across the U.S., new COVID-19 cases have tripled in the past two weeks to over 400,000 a day, the highest level on record, amid a rush by many Americans to get tested.

The high infection rates and resulting worker shortages are putting a heavy burden on employers large and small. Thousands of airline flights have been canceled in recent days, and many businesses have shelved return-to-work plans.

Weekend garbage collection was delayed in New Orleans, and jury trials in several Colorado counties were suspended. Some libraries on New York’s Long Island and a ski resort in New Hampshire had to close.

Dawn Crawley, CEO of House Cleaning Heroes, a cleaning service based in Herndon, Virginia, said she had to cancel four of 20 cleaning jobs for Tuesday because four employees were sick — three with COVID-19.

“The fear is it will run through the team” as well as customers, she said.

Policymakers and health authorities have been mindful of the toll on the economy and the education system.

Public heath experts have said that eradicating the virus is unlikely and that the world will instead have to find a way to keep COVID-19 down to an acceptable level, the way it does with the flu.

Last week, after the Centers for Disease Control and Prevention cut the recommended COVID-19 isolation period from 10 days to five, CDC Director Dr. Rochelle Walensky said: “We want to make sure there is a mechanism by which we can safely continue to keep society functioning while following the science.”

In another development Monday that could have a bearing on the ability of schools to stay open, the Food and Drug Administration gave its OK for Pfizer booster shots for children as young as 12. Boosters already are recommended for everyone 16 and older.

Elsewhere around the country, the Los Angeles Unified School District announced Monday that schools will now reopen Jan. 11 because of omicron’s rise. Furthermore, the district’s 600,000 students and roughly 73,000 employees will have to show a negative COVID-19 test result to enter campus. The district will have a testing site as well as take-home test kits available.

Syracuse, New York, canceled school Monday because of the increasing number of infections and a lack of substitute teachers.

In Wisconsin, the 75,000-student Milwaukee school system is going back to virtual instruction Tuesday because of rising cases among staff members. The district said it is aiming to return to in-person classes Jan. 10.

Detroit School Superintendent Nikolai Vitti told parents there will be no in-person or online learning through Wednesday because of a high rate of infection among employees that could lead to extensive spread of COVID-19 and “excessive staff shortages.”

The roughly 350,000 students in the Chicago school system returned, but a dispute between district leaders and the teachers union over safety measures could disrupt classes later this week. The union said it may vote Tuesday for remote teaching in the nation’s third-largest district.

The Peoria, Illinois, district extended winter break by a week.

Schools in Davenport, Iowa, surprised parents early Monday by announcing the cancellation of all classes for the day because of a shortage of bus drivers that was blamed at least in part on COVID-19.

Minnesota’s educators braced for a spike in cases as classrooms reopened as scheduled.

“What I’ve heard from superintendents is that they are nervous about omicron,” said Bob Indihar, executive director of the Minnesota Rural Education Association. “It seems to be the new normal that changes are going to happen and quarantines and people being out are just part of the process now. Districts are kind of taking it in stride.”

The president of the National Parents Union, a network of parent organizations, called the sudden switch back to virtual learning “an abomination.”

“Once again, parents are left scrambling at the last minute and, worse, far too many children are being deprived of an in-person learning experience, which is critical for their academic and social-emotional development,” Keri Rodrigues said in a statement.