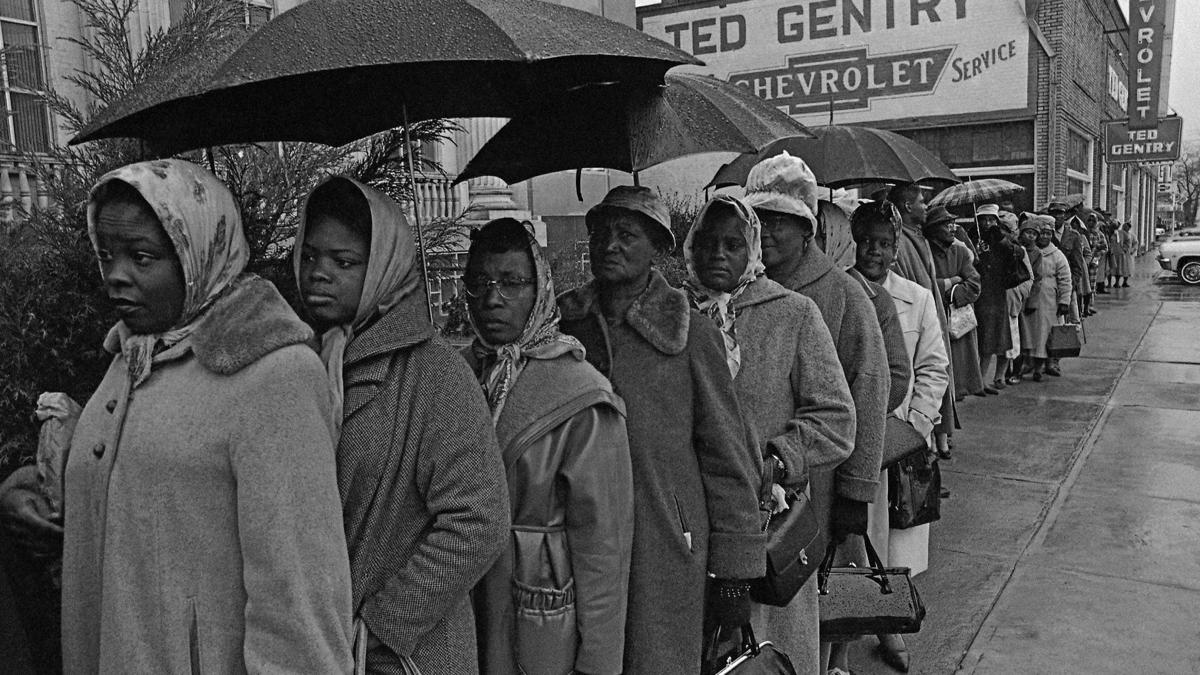 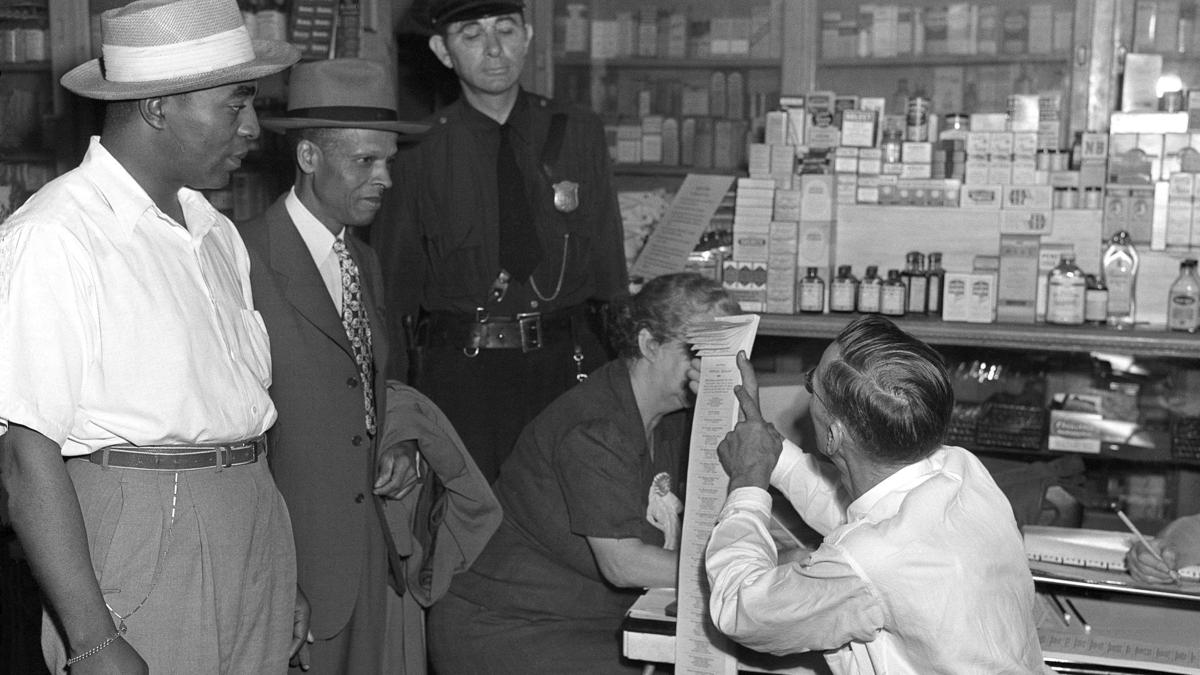 W. R. Owens, right, election official tells two African Americans who tried in vain to vote in Atlanta's city Democratic white primary on Sept. 5, 1945, that the primary is for white persons only and points to the top of the ballot which so states. They are Lewis K. McGuire, left, World War II veteran, and S. M. Lewis, a physician. Beside them stands policeman Roy Wall. (AP Photo/McD)

W. R. Owens, right, election official tells two African Americans who tried in vain to vote in Atlanta's city Democratic white primary on Sept. 5, 1945, that the primary is for white persons only and points to the top of the ballot which so states. They are Lewis K. McGuire, left, World War II veteran, and S. M. Lewis, a physician. Beside them stands policeman Roy Wall. (AP Photo/McD)

Georgia's controversial sweeping elections bill has been signed into law. And historians and critics are likening the measures to the start of a new Jim Crow era, saying it's a direct attack on the right to vote for Black Georgians in future elections.

According to Adrienne Jones, a political science professor at Morehouse College in Atlanta, firsthand accounts of slavery and Jim Crow America are a reflection of where our democracy could be headed if voting restriction laws keep being passed in state legislatures around the country.

"Reading slave narratives, you're experiencing the lives of people who are cut off from participation in their society, who did not have full citizenship. It allows us to view what society will be like from a fully disempowered state," she told CNN. "The right to vote was essential in the transition from being a slave to being a citizen. And now these rights are in danger again."

Jones said that it is valuable to revisit these slave narratives in the context of today's battle over voting rights.

"Our understanding of who is worthy of citizenship is affected by our experience with slavery," she said. "And voting is the way that we express citizenship in this country."

Georgia's new voting restrictions bill, SB202, passed both chambers of the legislature in the span of a few hours before Republican Gov. Brian Kemp signed it Thursday night. The new law imposes new voter identification requirements for absentee ballots, empowers state officials to take over local elections boards, limits the use of ballot drop boxes and makes it a crime to approach voters in line to give them food and water.

By changing its election laws, "Georgia will take another step toward ensuring our elections are secure, accessible, and fair," Kemp said.

Cliff Albright, co-founder of the Black Voters Matter Fund, says that these bills are simply "Jim Crow with a suit and tie and maybe a little bit of makeup and cologne on."

This persistent threat to the voting rights of Black Americans is one piece of the country's enduring racial legacy, historians say.

Compiled 71 years after the end of the Civil War, "Slave Narratives: A Folk History of Slavery in the United States," includes the histories and experiences of more than 2,300 people who were formerly enslaved. A digital copy is available to the public on the Library of Congress website.

The narratives were collected between 1936 and 1938 as part of the Federal Writers' Project (FWP) of the Works Progress Administration, later renamed Work Projects Administration (WPA).

Of those narratives, 163 are from Georgians, who recall their early lives on plantations across the state in Athens, Augusta, Columbus, Greensboro, Gwinnett County, Jefferson, Liberty County, Macon, Milledgeville, Washington-Wilkes, and White Plains. Many reflect on the changes, or lack thereof, brought on by emancipation. Struggles that still reverberate through our society today.

Her father was born in the segregated South just a few years after these slave narratives were collated.

She says that the restrictions of today are a disturbing echo of the post-Civil War South. While the passage of the 13th, 14th, and 15th Amendments constituted racial reckonings in their own right, the retaliatory Jim Crow laws "were concerted efforts to stop these changes, just like we're seeing now with these new voting restriction bills in Georgia."

"It wasn't like the laws passed and everything was changed," Harris added.

The fact that former slaves were alive less than a century ago is a stark reminder that the fight for Black freedom and civil rights is not a distant lesson from a history textbook, but still a lived reality for many, Jones said. By reexamining these stories we can appreciate today's activist efforts as natural continuations of an intergenerational fight for justice.

"Life is short. One hundred years is not a very long time," Jones said. "After your great-great-grandfather got emancipated, they lived through Jim Crow for a century and that overlap alone impacts your forward movement."

We tend to conceptualize change in terms of legislation, milestones like the Emancipation Proclamation of 1863, the 15th Amendment of 1870, and the Civil Rights Act of 1964. But, according to Jones: "It's not just the law, it's the culture.

"There needs to be a psychological shift in order for any substantial change to happen," she said. "Because you don't get people to change their ways just by talking at them."

Jones says that it's no coincidence that these voting restriction laws have been passed following a record turnout from Black voters that secured Georgia its first Black and Jewish senators.

According to her, there is always a lag before the mainstream culture catches up with any formal progressive measure, and this lag is often regressive and reactionary. This is historically evident in the passage of grandfather clauses and literacy tests to disenfranchise Black voters after the passage of the Fifteenth Amendment. It is also evident in the resurgence of the Ku Klux Klan during Reconstruction.

Former slaves recalled the terror instilled in them by the Klan after emancipation, especially following the assassination of pro-African American politician George W. Ashburn in 1868. That year, the Freedmen's Bureau reported 336 cases of murder and aggravated assault by Klan members against African Americans.

"I sure did keep out of the way of them Ku Kluxers," recalled Addie Vinson in 1938.

She worked as a plow hand in Oconee County. "Folks would see 'em comin' and holler out: The Ku Kluxers is ridin' tonight. Keep out of their way, or they will kill you.'"

Following emancipation, the vast majority of Black Americans were sent into the world with no land or education, and with little legal protections to ease them into life as American citizens.

In the interview with the FWP, he recalled how the Union Army broke the news of his freedom: "All the Yankees and some of our leading colored men got up there and spoke, and told the negroes: 'You are free. Don't steal! Now work and make a living. Do honest work, make an honest living and support yourself and children. There are no more masters. You are free!'"

But what did this freedom mean? Mostly, a lack of food, land, and education that forced many former slaves to continue working for their former masters as sharecroppers. Adeline Willis of Wilkes County and Henry Wright of Buckhead told the FWP interviewers, "we kept living like we did in slavery."

"It was two or three years after the war before any of us could save up enough money to start buying land," Vinson told the FWP in 1938. "And then, if we didn't watch our steps mighty careful, the white folks would find a way to get that land back from us."

Some FWP interviewers described the living conditions of those they interviewed. Several lived in welfare housing in Atlanta, many others in rundown shacks or cabins. Sadie B. Hornsby describes the scene on 156 Willow Street, the home of Alice Green in Athens, as "a tumble down shack set in a small yard, which was enclosed by a sagging poultry wire fence. The gate, off its hinges, was propped across the entrance."

Professor Harris points out that a decade after these interviews were collected, the post-World War II suburb boom led to intense redlining across the United States. These discriminatory housing policies prevented Black Americans from receiving mortgage loans and led to increased disinvestment in majority-Black communities, widening the already-present socioeconomic chasm between Black and White America.

"We still live with those types of suburbs," she said. "These actions and legacies don't disappear overnight. These slave narratives show us that, unless we actively fight for our citizenship, it will not be given to us."

"Inequity is intergenerational," agrees Jones. "If we don't understand the slave narratives, we don't understand why people behave in the ways that they do today, and we don't recognize how inequitable even the best legislation is at providing the kind of equity that it presumably provides."

The specter of slavery that still haunts the South

Although the Voting Rights Act of 1965 outlawed discriminatory voting requirements, such as literacy tests, in the decades that followed lawmakers began chipping away at the protections it guaranteed. In 2013, the Supreme Court declared unconstitutional Section 4(b) of the Act, which required districts with a history of racial discrimination to obtain federal approval before implementing changes to their voting laws. With Section 4(b) gone, the Voting Rights Act was effectively declawed.

Now, a final push to kill the Voting Rights Act is underway. Even as Brnovich v. Democratic National Committee is being argued in the Supreme Court, lawmakers in more than 40 states, including Georgia, have introduced more than 250 bills that include voting restrictions, according to a tally by the Brennan Center For Justice at New York University.

Harris cautions that voters shouldn't downplay the racial subtext underlying the rhetoric of election security. In fact, she finds a striking parallel between the narrative of the Civil War as a fight over states' rights and the unfounded claim of voter fraud as an impetus for these new bills.

"If we look back to the Civil War, issues of race led to the literal downfall of this nation," she said. "Both the states' rights narrative and the dog whistle of election fraud completely remove Black people from the story."

Jones says that these new bills are meant to paralyze voting rights activists.

"Shock is damaging. People say that they can't believe that this is happening in 2021. Yes, you can. We need to move past shock as quickly as we can and decide how we're going to move forward and what we're going to do to combat it. If we waste our energy on shock, we're losing."

"Besides the legacy of slavery and Jim Crow, Georgia has a strong civil rights history that reinforces our understanding of that era," she said. "Together, they remind us that horrible things happen but also that great progress is made. What we need to recognize, especially in the context of January's runoff, is that it's never one and done. It's a struggle, and we need to stay vigilant."