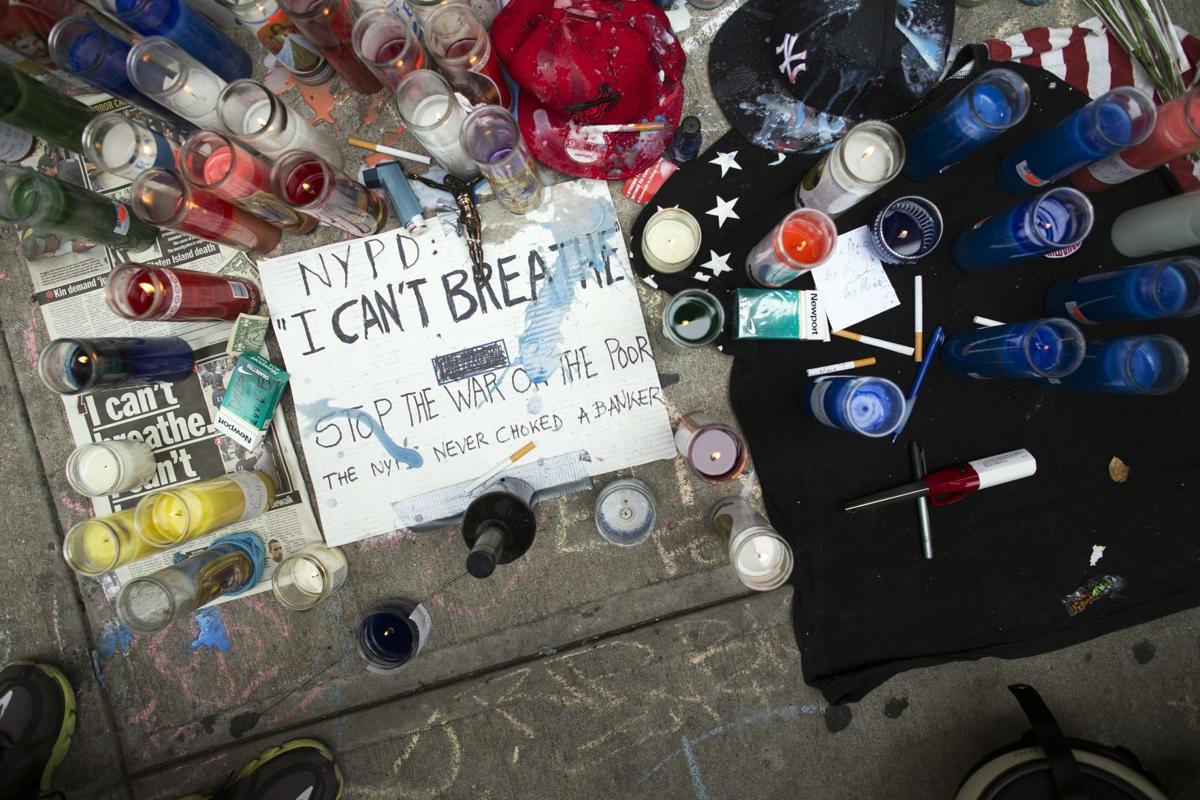 A memorial for Eric Garner rests on the pavement near the site of his death, in the Staten Island borough of New York. 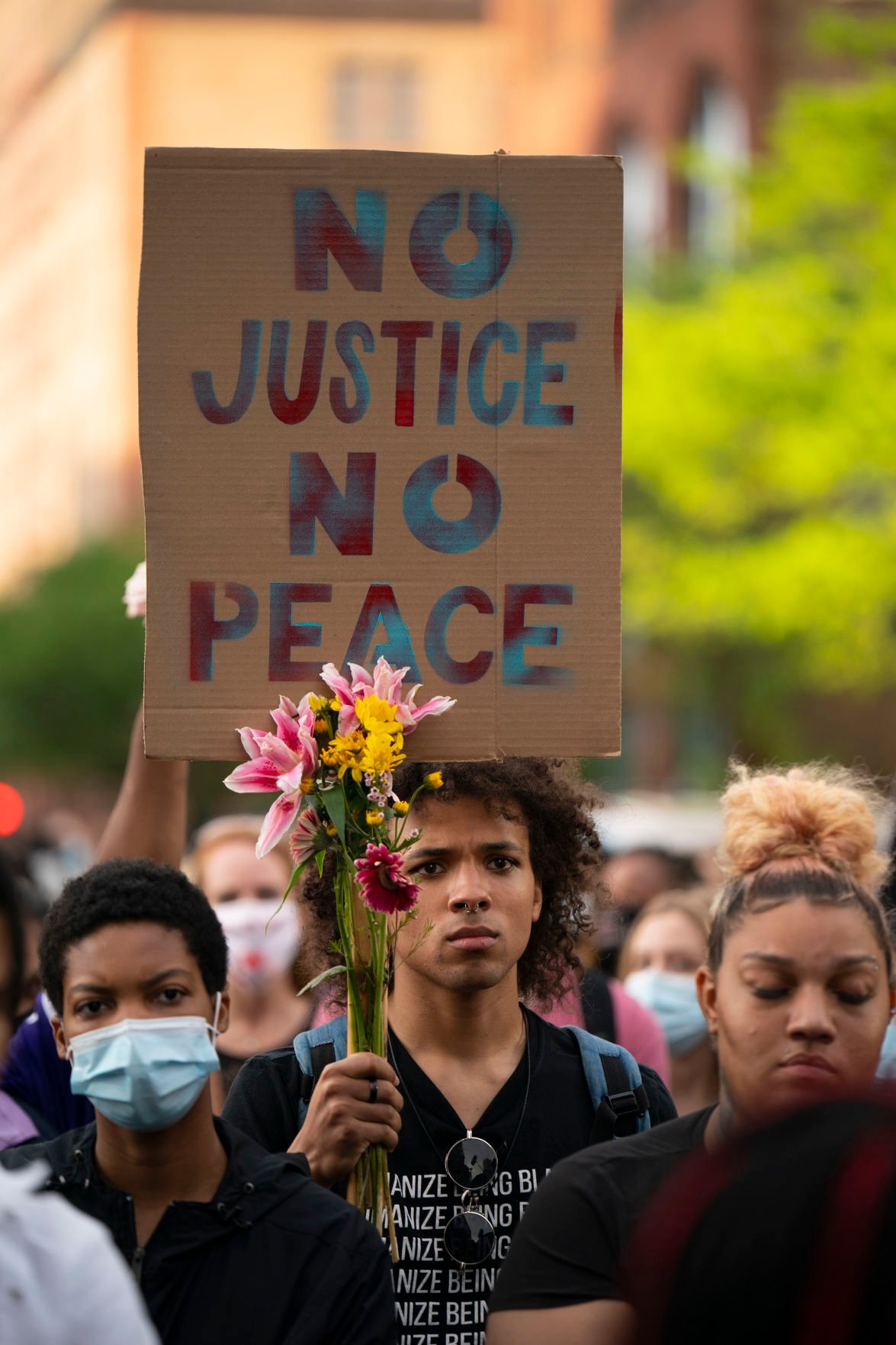 People listen to a speaker during a rally in downtown Minneapolis on Sunday, May 23, 2021. Members of George Floyd’s family, and others who lost loved ones to police encounters, joined activists and citizens in Minneapolis for a march that was one of several events planned nationwide to mark the anniversary of Floyd’s death. —Jeff Wheeler/Star Tribune via AP)

A memorial for Eric Garner rests on the pavement near the site of his death, in the Staten Island borough of New York.

People listen to a speaker during a rally in downtown Minneapolis on Sunday, May 23, 2021. Members of George Floyd’s family, and others who lost loved ones to police encounters, joined activists and citizens in Minneapolis for a march that was one of several events planned nationwide to mark the anniversary of Floyd’s death. —Jeff Wheeler/Star Tribune via AP)

Democratic Rep. Leslie Herod had no luck persuading her colleagues in the Colorado Legislature to ban police from using chokeholds after the death of a 23-year-old Black man in suburban Aurora in 2019.

She couldn’t gather enough support to even introduce a police reform bill that included a ban. That changed when George Floyd died after being pinned under the knee of a Minneapolis police officer and the video set off a summer of protests over police killings and racial injustice.

Within a month of Floyd’s death, Colorado lawmakers took the step they had avoided after the death of Elijah McClain and approved a ban on chokeholds as part of broader police reform legislation. The law overrode more limited chokehold restrictions that were put in place four years earlier.

“Making it clear that is completely banned in all circumstances has the potential to save lives,” said Herod, who is Black.

Colorado is among several states to prohibit or severely limit the use of chokeholds and neck restraints by police officers in the year since the world watched Floyd plead for air as he was pinned under the knee of former officer Derek Chauvin, who was convicted of murder and manslaughter last month.

At least 17 states, including Minnesota, have enacted legislation to ban or restrict the practice, according to data provided to The Associated Press by the National Conference of State Legislatures.

Before Floyd was killed, only two states, Tennessee and Illinois, had bans on police hold techniques that restrict the airway or blood flow to the brain when pressure is applied to the neck.

A majority of the bans enacted over the past year are in states controlled politically by Democrats, as Colorado is. They include California, Illinois, Nevada, Oregon and Virginia, among others.

This past week, Washington Gov. Jay Inslee signed a broad legislative package that will implement numerous police accountability and reform measures, including an outright ban on chokeholds and neck restraints.

The efforts also have generated support among some Republicans. Bans or restrictions have been signed into law by GOP governors in Massachusetts and Vermont, which have Democratic legislatures, and have passed in fully Republican-controlled states such as Indiana, Iowa and Utah.

Just a month after Floyd’s death, Utah lawmakers voted to ban knee-to-neck chokeholds, though the legislation stopped short of a ban on all types of neck restraints. The bill was sponsored by Democratic Rep. Sandra Hollins, the only Black member of the Utah Legislature.

“Our community is feeling unsafe,” Hollins said at the time. “That’s why you’re seeing the protests. They are in fear of their lives. This bill sends a very powerful message as legislators saying, ‘We hear you, and we’re going to do something about it.’”

Many of the new laws include criminal penalties for officers if a chokehold or neck restraint leads to death or injury, unless they can show it was necessary to protect their life or someone else’s. In Vermont, officers can face up to 20 years in prison and a fine of up to $50,000.

Those consequences are important to gain compliance, said Lorenzo Boyd, director of the Center for Advanced Policing at the University of New Haven in Connecticut.

“If we say chokeholds are prohibited, police will still use chokeholds,” he said. “If we say, ‘Chokeholds are now felonies and if you use a chokehold we can now prosecute you,’ I think that would change the narrative.”

In 2014, a New York City police officer put Eric Garner in what appeared to be a chokehold while arresting him on suspicion of illegally selling cigarettes on Staten Island. On amateur video, Garner can be heard saying “I can’t breathe.”

While the city had previously banned chokeholds, no statewide legislation followed Garner’s death. It wasn’t until the Floyd killing that the New York Legislature passed a bill to effectively ban police use of chokeholds and make it a felony.

The lawmaker who pushed the ban said a similar bill introduced in 2014, shortly after Garner died, failed to gain traction.

“When I came to the Senate, I came looking for this bill,” state Sen. Brian Benjamin said of the legislation he introduced in 2019. “But it wasn’t until George Floyd’s murder occurred that the nationwide, global energy around ‘We’ve got to do something,’ really changed the dynamics in New York.”

When asked to speculate why the Legislature didn’t act after the Garner death, Benjamin said there was room for detractors to give the officer the benefit of the doubt. He said what happened in Minneapolis was different.

“With the Floyd video, there’s absolutely no wiggle room of any kind around the evilness of what was happening there,” he said.

The legislation related to chokeholds and neck restraints is part of a broader effort in many states to address police procedures, training and discipline since Floyd’s death.

Since May 2020, at least 67 police reforms have been signed into law in 25 states related to specific topics the National Conference of State Legislatures analyzed at the AP’s request. In addition to neck restraints and chokeholds, the laws address police-worn body cameras; disciplinary and personnel records; independent investigations of officer conduct; use of force restrictions; qualified immunity; and no-knock warrants.

At least 13 states enacted restrictions on officer use-of-force and at least eight have implemented laws beefing up officer reviews and investigations, according to the NCSL data.

While the Floyd killing prompted reforms in many states, legislatures elsewhere took no action or went the other direction and gave police even more authority. City police and county sheriff’s departments also have wide leeway to set many of their own rules, including around use-of-force.

A number of large cities and police departments banned or restricted the use of chokeholds even before Floyd was killed. But officers still employed the technique and used it disproportionately against Black men, said Paul Weber, a former federal prosecutor and author of the book, “Chokehold: Policing Black Men.”

“Even in jurisdictions where restraints and chokeholds are banned, as a practical matter there’s no consequence when officers engage in those bad practices,” Weber said. “A statewide ban would apply to more departments — but again, the policies aren’t going to be more effective than the enforcement.”