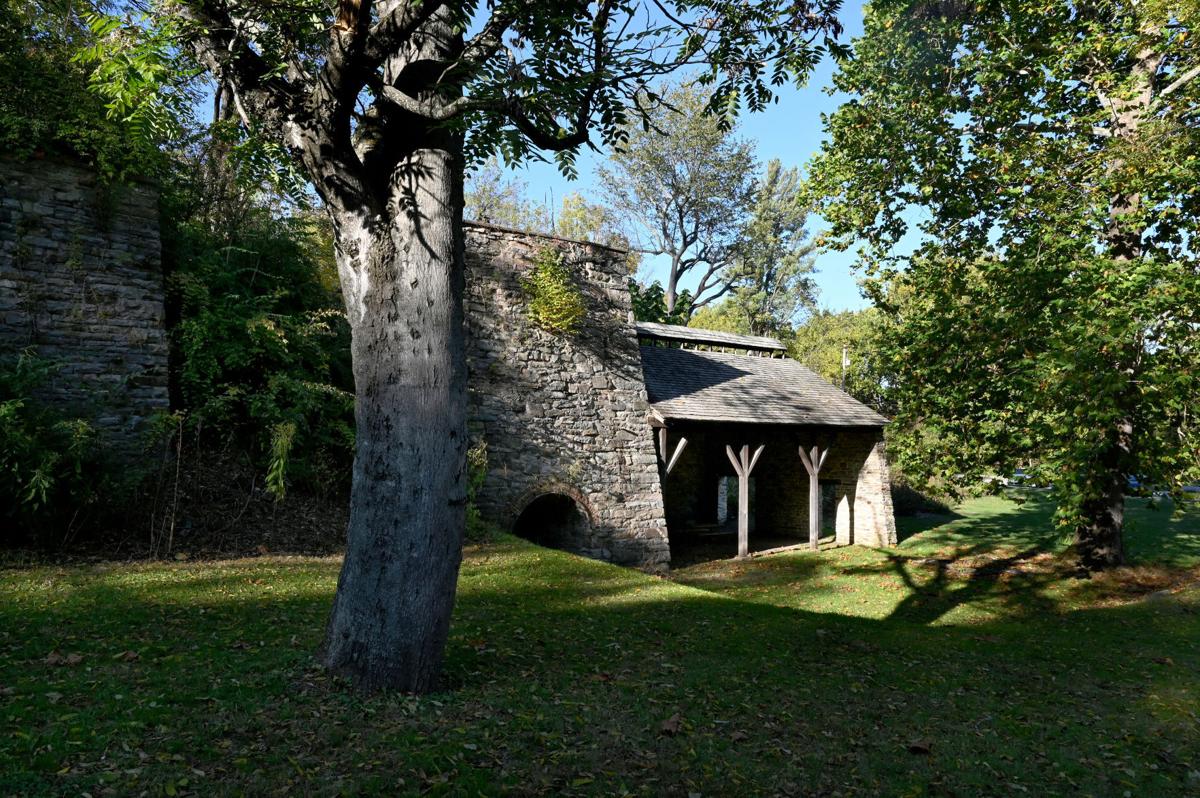 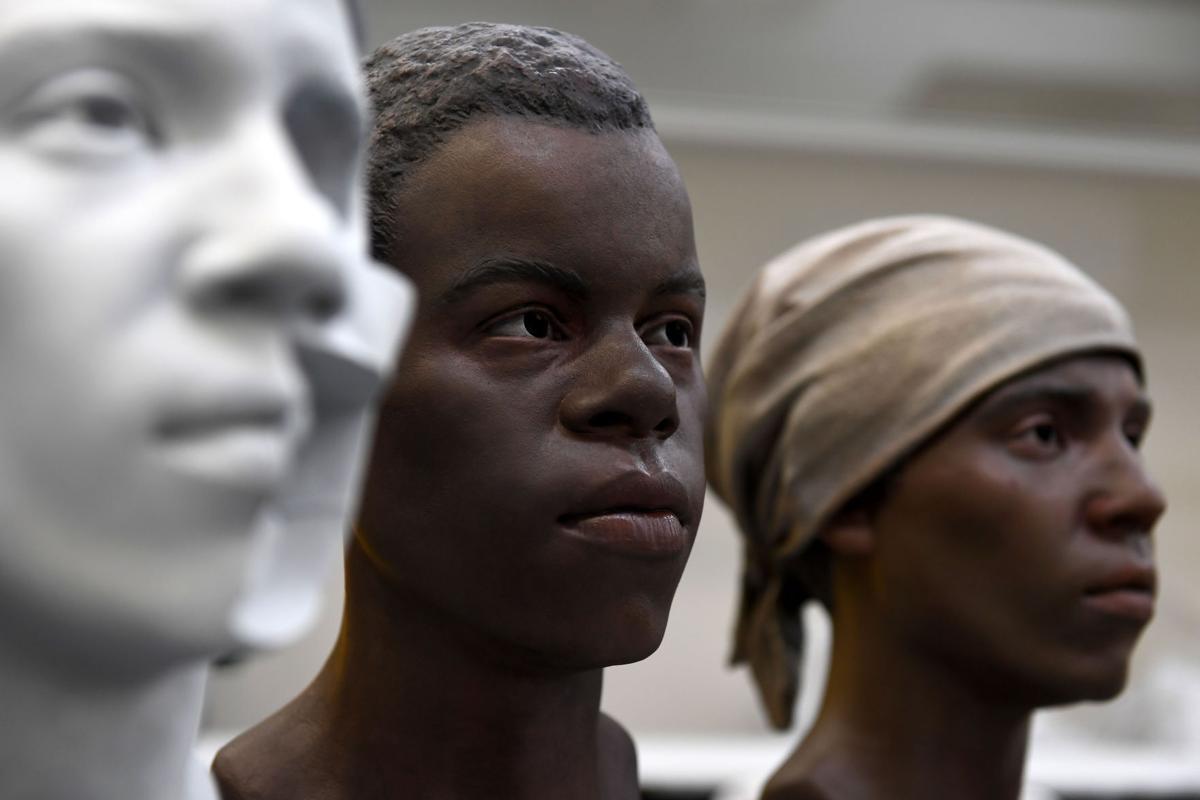 The re-created faces represent the culmination of an eight-year study that used genetics and other cutting-edge technology to examine remains of people enslaved at the Catoctin iron forge in Maryland.

The re-created faces represent the culmination of an eight-year study that used genetics and other cutting-edge technology to examine remains of people enslaved at the Catoctin iron forge in Maryland.

Burial 35 was a young enslaved woman who walked with a limp and was missing a front tooth. She was in her 30s when she died, perhaps in childbirth. Her infant son, who died a few months later, was buried in a tiny coffin on top of her.

When the experts re-created her weary face, they gave her a headscarf, something she might have worn in the grimy Maryland industrial settlement where she lived.

Burial 15 was a teenager who had been laid to rest with care and what may have been sprigs of sassafras. The herniated discs in his back from overwork could not be reflected in his face, and the sculptor gave him a look of innocence.

The two re-created faces, unveiled for the first time last month, represent the culmination of an eight-year study that used genetics and other cutting-edge technology to examine remains of people enslaved in the late 1700s and early 1800s at Catoctin Furnace, a historic iron forge in Frederick County, Md.

The study offered a rare look of the enslaved at an industrial site, as opposed to the farms or plantations where most captive Black people were forced to labor.

Researchers said they were struck by the number of teenagers in the cemetery and wondered if the harsh furnace work played a role in their early deaths.

Experts from the Harvard laboratory of geneticist David Reich extracted DNA from the bones of 29 people exhumed from the cemetery more than 40 years ago for a road project and identified five, maybe six, family groups.

“I called them the invisible people,” said Sharon Burnston, the retired archaeologist who directed the exhumation. “In the cultural climate of the ‘80s, nobody even cared.”

DNA helped reveal mothers and their children, and individuals who were potential siblings.

It suggested racial backgrounds. The baby buried with his enslaved Black mother, for example, had a White father, experts said.

And it revealed intriguing burial patterns.

In one case, two baby boys — one a newborn, the other about 2 months old — were buried on either side of their mother, who was about 22 when she died. Some distance away, another relative of hers, a boy, was buried. But their exact relationship is unclear.

Craniostenosis, an abnormality of the skull, was found in an unusually high number of the deceased.

The woman whose face was re-created had it. So did her infant son, who may have been killed by it.

Her little brother, who was buried not far away, also had it, Smithsonian anthropologist Kari Bruwelheide said.

In addition, the woman had a painful left-hip condition, where one bone rubbed against another and caused her to limp. The malady usually begins in childhood, Bruwelheide said.

“That means she lived with this pain ... for virtually her entire life,” she said.

Indications of sickle cell disease, an inherited blood disorder that mainly affects African Americans, were found. A little boy, about 4, and his 2½-year-old sister, who was buried nearby, both showed it.

Signs of the toxic and backbreaking work the enslaved had to do at the primitive ironmaking site emerged.

One older man’s back was so severely bent that it had to be broken to get him into his grave, experts said.

Another man’s bones had extremely high levels of zinc, probably from having to clean deposits from the inside of the furnace and suggesting he may have had “fume fever” as a result, the experts said.

The project was a major scientific advance, as well as a vivid portrait of the misery of enslaved life at the furnace.

“I never thought that I would see ... in my 40 years of doing this ... the ability to go into a cemetery and actually through genetic means be able to identify relationships,” Smithsonian anthropologist Douglas Owsley, who helped lead the project, said at the June 24 unveiling in Frederick.

Maryland archaeologist Elizabeth A. Comer, secretary of the Catoctin Furnace Historical Society, which launched the project, said of the deceased: “These people deserve what we’re now able to do.”

The two reconstructed faces, which are based on copies of the original skulls held at the Smithsonian, went on display Saturday at the new Museum of the Ironworker in Catoctin Furnace, about 60 miles northwest of Washington.

The faces were created in 2019 at StudioEIS, a leading sculpture and design firm in Brooklyn known for making figures for museums and other institutions around the country. (The unveiling was delayed a year by the coronavirus pandemic.)

“It’s easier to tell a story if you’re looking into a face,” Comer said.

And people involved in the overall enterprise hope it might lead to long-lost descendants of the furnace workers. None of those from the cemetery have been identified.

“We don’t know what [their] names were,” Comer said. “And we don’t know in many cases what their jobs were. ... These are people, their memory has been lost, their descendants have been lost ... a legacy has been lost.”

The project began when Comer, who grew up on a farm near Catoctin, suggested to the Smithsonian that it reexamine the cemetery bones that had come to the National Museum of Natural History 40 years earlier.

Under the direction of Burnston, the remains were carefully removed from the cemetery in 1979 and 1980 when nearby Route 15 was being expanded. The graves were thought by some locals to be Native American. More than half the graves had to be removed. Dozens more are still there.

They were turned over to the museum and were studied in detail by the late Smithsonian anthropologist J. Lawrence Angel.

But there had been great scientific progress in 40 years and the Smithsonian agreed to revisit the bones.