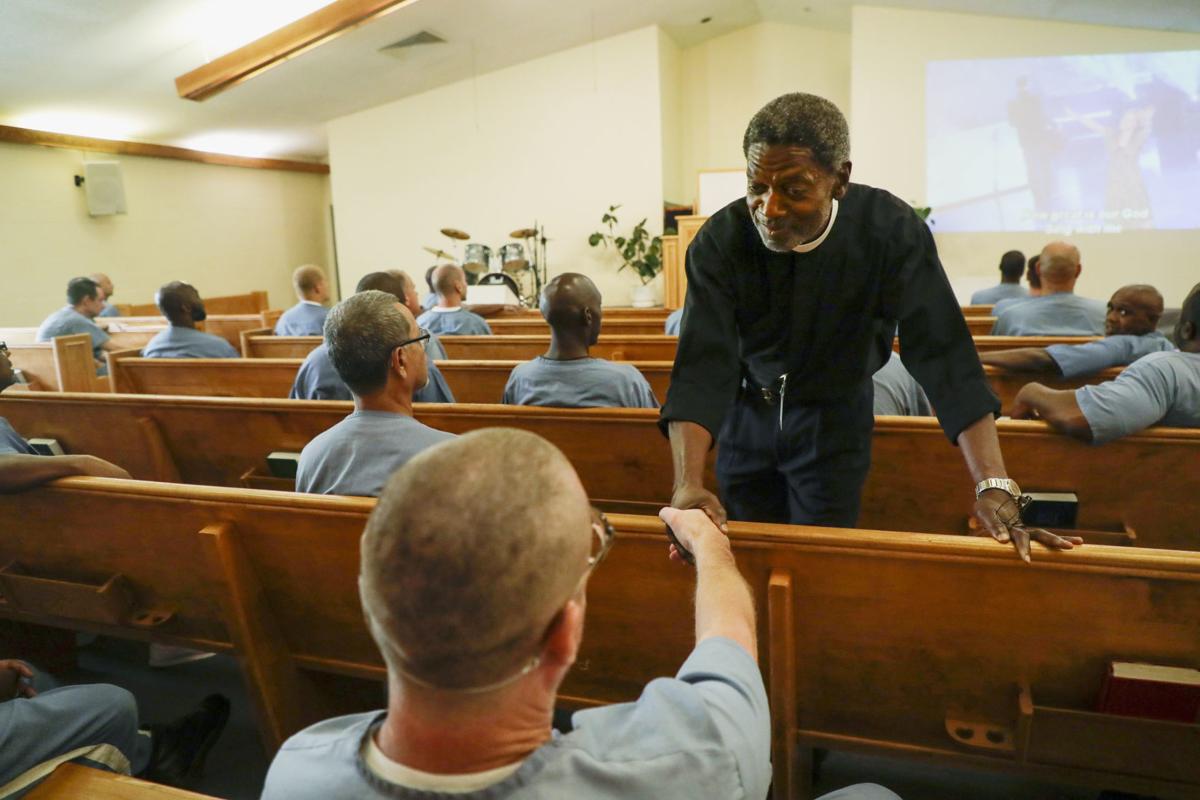 In this Aug. 20, 2019, photo, Deacon Joe Bakker greets one of the Jefferson Correctional Institution inmates who participates in the parables class he teaches at the prison in Monticello, Fla. — Tallahassee Democrat via AP/Tori Schneider 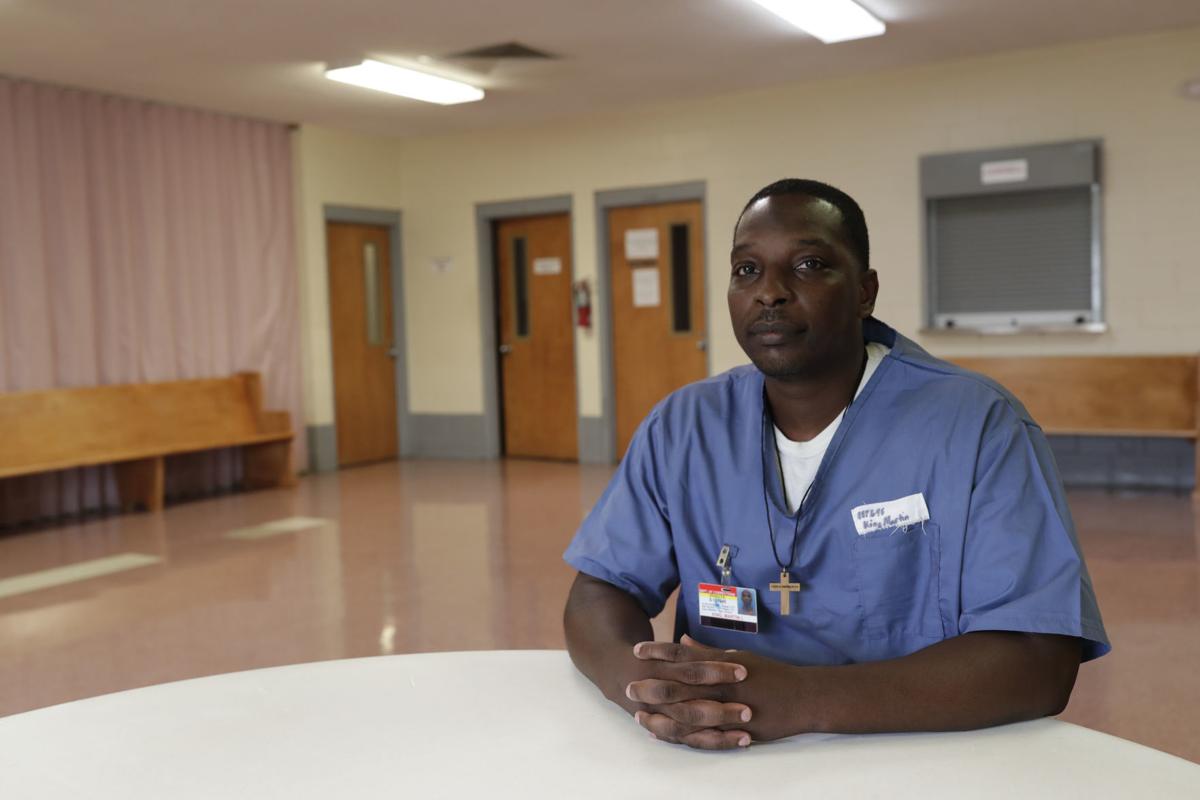 In this Aug. 20, 2019, photo, Martin King, 39, an inmate at Jefferson Correctional Institution, poses for a photo at the prison in Monticello, Fla. He was one of 37 inmates who graduated from the prison's new faith- and character-based program. — Tallahassee Democrat via AP/Tori Schneider 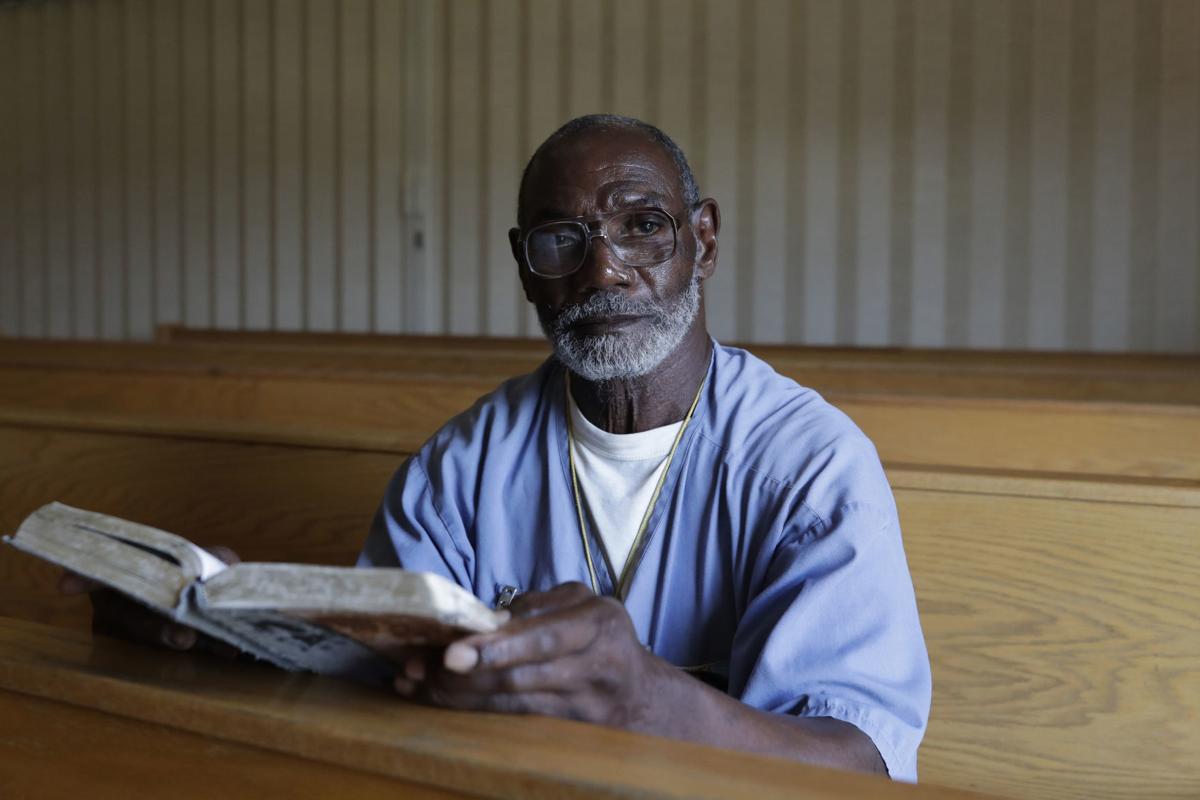 In this July 28, 2019, photo, inmate Richard McMillian Jr., 72, is a participant in the faith- and character-based program at Wakulla Correctional Institution in Crawfordville, Fla. "It's for people that want to make a change," he said. "Since I've been in prison, I had a tremendous change in my life." — Tallahassee Democrat via AP/Tori Schnedier

In this Aug. 20, 2019, photo, Deacon Joe Bakker greets one of the Jefferson Correctional Institution inmates who participates in the parables class he teaches at the prison in Monticello, Fla. — Tallahassee Democrat via AP/Tori Schneider

In this Aug. 20, 2019, photo, Martin King, 39, an inmate at Jefferson Correctional Institution, poses for a photo at the prison in Monticello, Fla. He was one of 37 inmates who graduated from the prison's new faith- and character-based program. — Tallahassee Democrat via AP/Tori Schneider

In this July 28, 2019, photo, inmate Richard McMillian Jr., 72, is a participant in the faith- and character-based program at Wakulla Correctional Institution in Crawfordville, Fla. "It's for people that want to make a change," he said. "Since I've been in prison, I had a tremendous change in my life." — Tallahassee Democrat via AP/Tori Schnedier

MONTICELLO, Fla. — Martin King knew he made a mistake when he opened fire on three men playing dominoes in an empty lot in Jacksonville on Jan. 9, 2012. King believed at least one of the men fired shots outside of his children's Jacksonville daycare a few days before on Christmas Day.

"My children were threatened, and I took it into my own hands to protect my children," he said. "I could've made a better decision and now I'm remorseful for that."

One of the victims died. King was convicted of second-degree murder. The 39-year-old now is serving a 21-year sentence at Jefferson Correctional Institution in Monticello.

He was one of 37 inmates in the first class to graduate from the prison's new faith- and character-based program in September.

"I wanted to change my life," King said. "I didn't want to go home the same as I came in and just wanting to be a better person for my family, because I hurt my family coming here.

"It's an opportunity for me to get to know myself, and to just really reflect on the things that I did wrong in my life and bad decisions that I made and give me an opportunity to make better decisions … before I get to the free world again."

The voluntary program, created by state law, aims to assist inmates in their adjustment to prison, help them take responsibility for their actions and reduce recidivism, meaning the tendency to relapse into criminal behavior.

"I took a life, so my desire and my mission now is to try and save as many lives as possible," King said. "The faith-based program, and even the faith studies, are avenues for me to go through to be able to do exactly what I set my mind to do."

Some faith- and character-based programs are prison-wide, meaning that all inmates in the prison are participants. But others, like Jefferson's, are based in one dormitory, with all participating inmates living together as one community.

"It's not violent like the other dorms," King said. "It's a place where you can stay busy doing positive things and that keeps you going in the right direction. It's a lot of positive people in there . . . so when you have a bad day, you can lean on the positive people."

He said because so much of the inmates' time is taken up by classes, about 25 hours a week, time moves faster amid an otherwise mundane prison life: "When we have something to do, especially something positive to do, we use that energy in those places and then we don't have much energy to get into any foolishness."

The classes are held in the prison chapel, which consists of a sanctuary, gathering room and library. Many are discussion-based. All are led by outside volunteers.

After graduation, King and others who qualify can continue working in the program by leading classes and possibly living in a "graduate/readiness" dorm helping inmates coming into the program prepare.

Others will be placed back in the general prison population, where the hope is that they will lead by example using what they've learned and spread the word about the program, generating more interest.

Demand is growing: There are 9,600 inmates on a waiting list to enter similar programs in prisons statewide.

King is studying to become a preacher, which he hopes to do when he gets out of prison. He has already been approved to attend seminary while incarcerated.

King's class was the first to be offered the program at Jefferson CI, but the program has been a part of Florida's Department of Corrections, the nation's third-largest prison system, since 1999.

Across the state, 2,600 inmates are participating in faith- and character-based programs in various prisons. Of those, 1,922 are in Wakulla's, which is now prison-wide in the facility's main unit and work camp.

Florida Secretary of Corrections Mark Inch said he plans to keep expanding the program as long as the department has the volunteers to make it happen.

"I'm so impressed that we do this program," Inch said after speaking at Jefferson Correctional's graduation ceremony. "And to think that it goes back 20 years, that folks in the Legislature actually put it in statute to set it on this course, (that's) given us this foundation to build on."

Richard McMillian Jr., a 72-year-old inmate at Wakulla, is going through the faith and character program for the second time. He previously completed the program at Jackson Correctional.

"It's for people that want to make a change," he said. "Since I've been in prison, I had a tremendous change in my life." McMillian has been incarcerated since he was 23 on a life sentence for sexual battery.

In addition to the weekly classes, various religious services are offered on Sundays at Wakulla. McMillian attends the Episcopal service.

"I come to this service every week because I want to get closer to God," he said.

Both the prison-wide and dormitory programs are entirely run by 13,000 volunteers. No taxpayer funds are spent on the program.

Together, the two represent the diocese, which has one of the most robust prison ministries in the country, according to Rev. David Killeen, the rector of St. John's.

The Diocese works with the faith and character-based programs in 15 prisons, with St. Johns serving half of those. The church provides the Eucharist, bibles, movies, worship supplies, bulletins, prayer books — and the religious leadership.

"This is an extraordinary program here and these volunteers are amazing," said Geoffrey Hill, an inmate at Wakulla serving a 15-year sentence for a sex offense. "Volunteers that come in . . . they sustain this program here at Wakulla. There's no way DOC could afford these hours that these people put in."

He creates meaningful relationships with the inmates he works with, shaking hands with and greeting each one before beginning his teachings.

The inmates confide in him when something isn't going right in their lives. He adds them to his prayer list when they need it.

On the morning of their big day, inmates filed in through Jefferson Correctional's chapel doors with smiles on their faces. They had been waiting for this day for the past year.

The gathering room behind the sanctuary is festooned with purple streamers. The tables are covered with white tablecloths.

Later, there will be cake.

Other inmates still working through the program are there, motivated to finish after seeing their peers receive completion certificates.

The graduates slowly walk up the aisle, and into the sanctuary pews one by one as the ceremony begins.

King, a stand-out member of his group, was asked to speak.

"On January 9, 2013, I had my encounter and the lives of the victims of my crime, their families, my own family, and even my life would never be the same," he said. "Four years after that, I would be in prison for the first time in my life."

In his speech, King compared participating in the program to a car being taken to a mechanic to have the motor rebuilt.

"There are resources for reconstructing parts of our lives that are broken if we work the program," he told the other graduates and those attending the ceremony. "There are classes in place to help us become productive in society and change and recover from life's happenings.

"The faith-based dorm is the living environment for us men to have an opportunity to be around like-minded people and to associate in a place suitable for reconstruction."

Although King and his fellow graduates have accomplished their short-term goal of completing the program, he reminds them of their long-term goal and the purpose of the program: Re-entry into society.

"Our fight is not over. We must continue to press individually; we must not cower at the chance to become men and continue to improve our lives and be proof that change is possible."

Tallahassee Democrat via The Associated Press

Tyrone Mathis spent 14 years in a Delaware prison for robbery. He’s been out since April, and now he’s working at “The Bridge” to help other r…