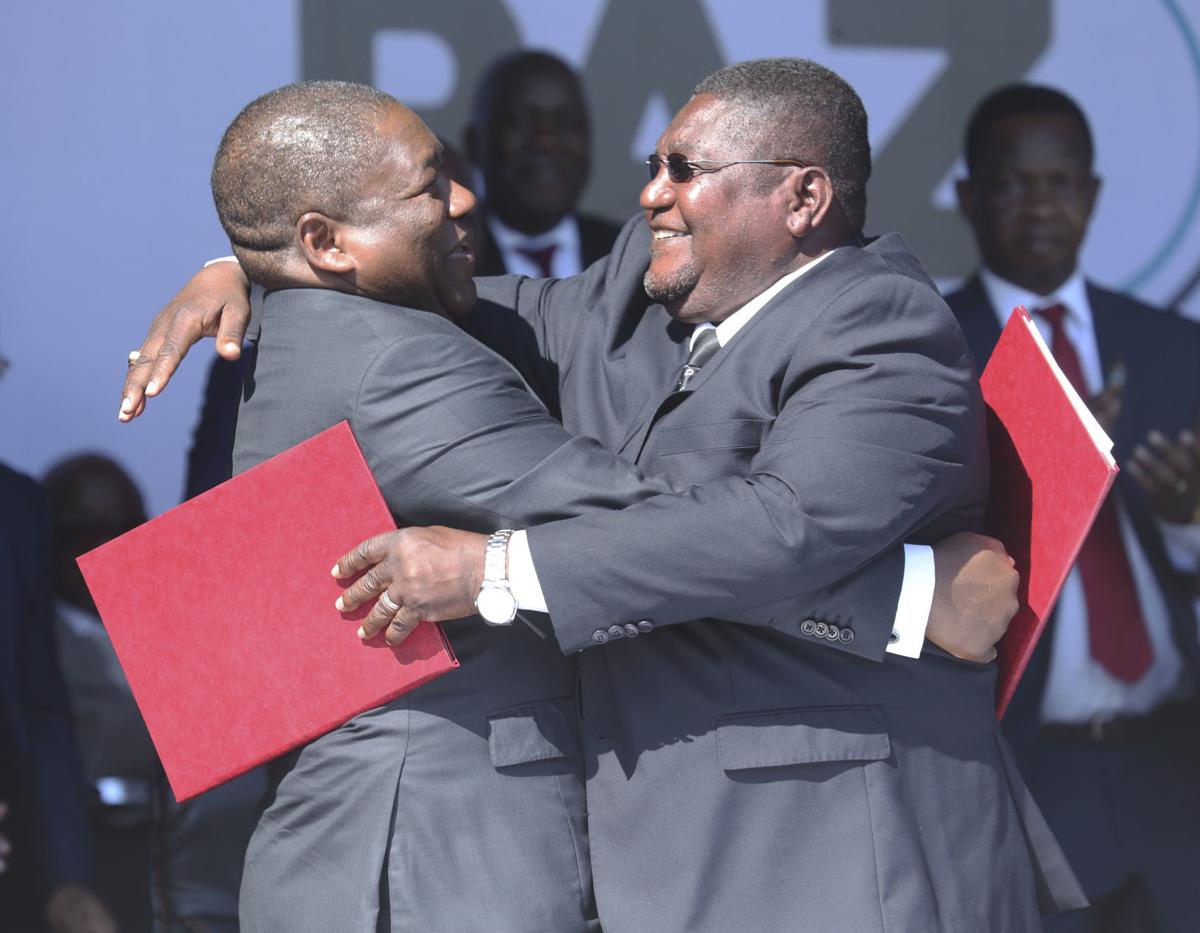 Mozambique President Filipe Nyusi, right, and Renamo leader Ossufo Momade hug each other after signing a peace accord at Gorongosa National Park on Thursday. 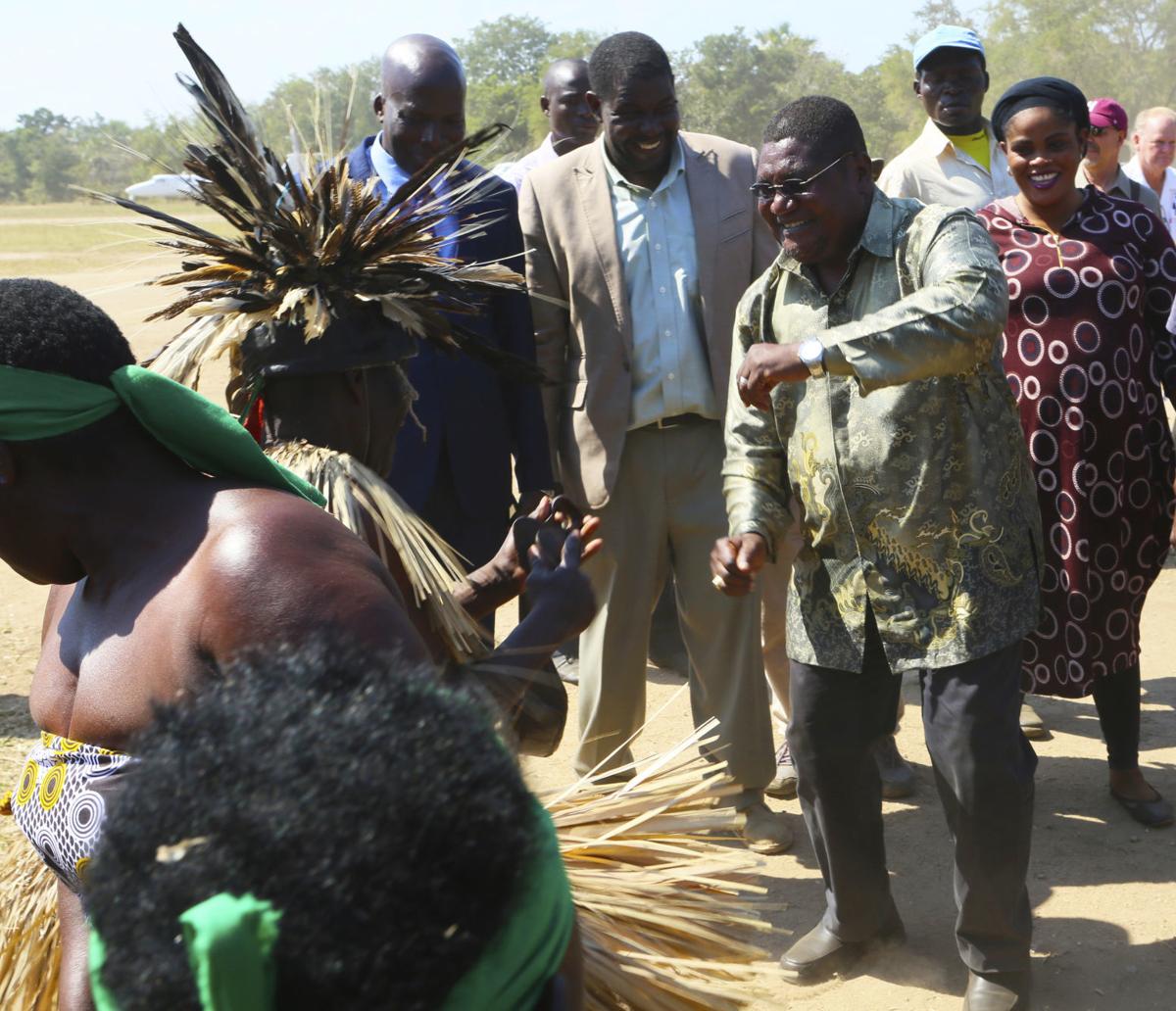 Renamo leader Ossufo Momade, center, performs a dance with locals upon his arrival for the signing ceremony. 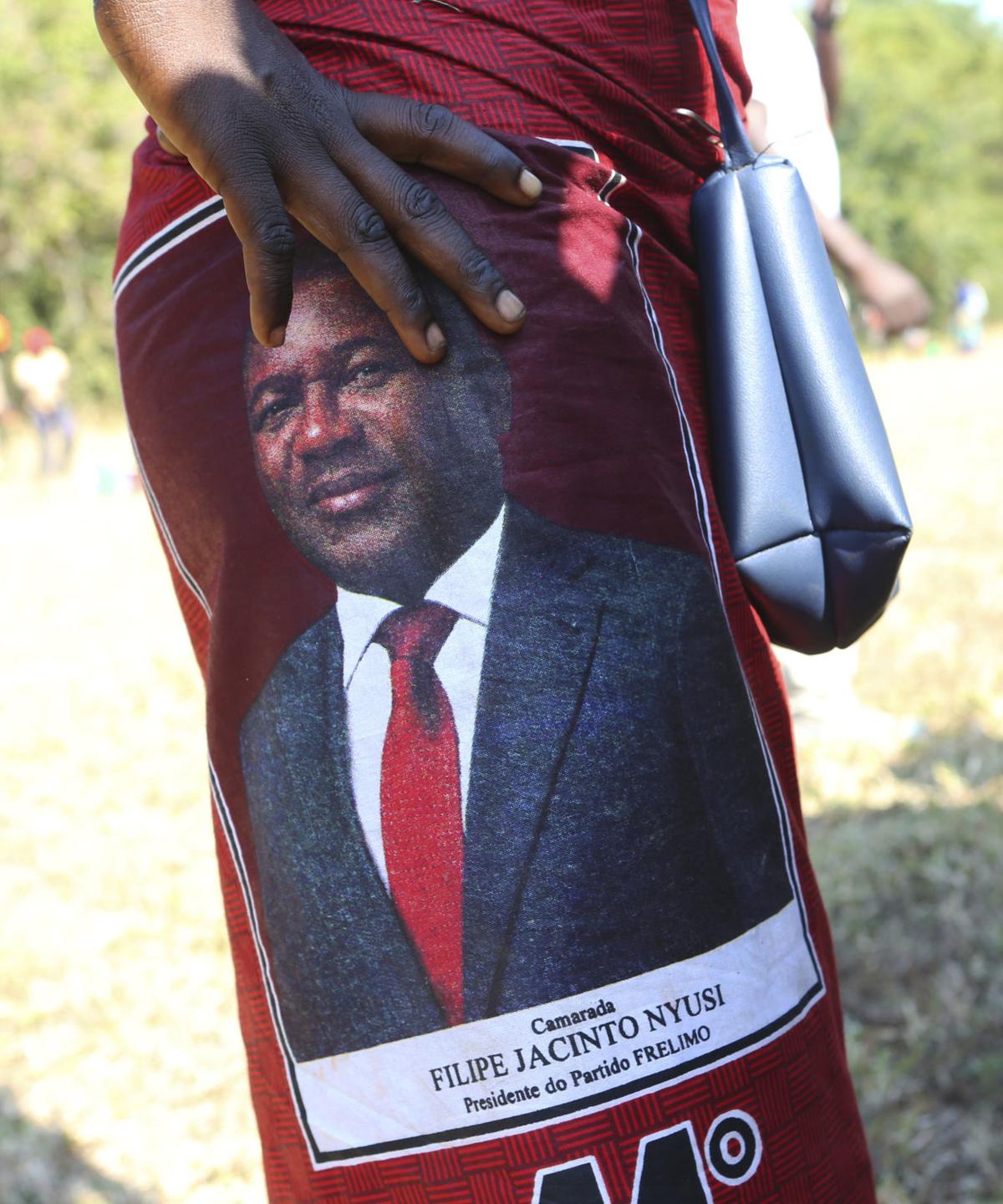 A woman waits for the leaders to arrive for the signing ceremony. — AP Photo/Tsvangirayi Mukwazhi

Mozambique President Filipe Nyusi, right, and Renamo leader Ossufo Momade hug each other after signing a peace accord at Gorongosa National Park on Thursday.

Renamo leader Ossufo Momade, center, performs a dance with locals upon his arrival for the signing ceremony.

A woman waits for the leaders to arrive for the signing ceremony. — AP Photo/Tsvangirayi Mukwazhi

The ceremony, held in a national wildlife park that was a rebel stronghold and a center of the conflict, brought hope for a new era of peace and economic growth in one of the world’s poorest countries, where an estimated 70% of the population lives on less than $2 per day.

It came as more than 5,200 of the former rebel group’s fighters were disarming just weeks before a visit by Pope Francis and a national election that will test the resolve of the two parties to sustain the peace.

“We are living in a moment of hope. This is the moment of our reconciliation,” President Filipe Nyusi told a cheering, ululating crowd in Gorongosa National Park, which he said was chosen for the signing because it was where the conflict began and would now be a “sanctuary of peace and biodiversity.”

Renamo leader Ossufo Momade also pledged that the warring sides had put aside their hostilities.

“We are now brothers in peace,” he declared. “With this signing we are showing all Mozambicans and the world that we have buried our legacy of violence and now we are committed to dialogue to resolve our differences.”

The permanent cease-fire was the culmination of years of negotiations to end the fighting that has flared sporadically in the 27 years since the civil war ended in 1992.

After signing the accord, Nyusi and Momade shook hands and embraced at the foot of Mount Gorongosa, where the rebels maintained their military headquarters. Some 800 of the disarming fighters were to live in a tented demobilization camp next to the wildlife park.

The accord is to be followed by another agreement to be signed Tuesday in Mozambique’s capital, Maputo, pledging peaceful national elections in October. Previous elections have been marred by violence and Renamo allegations that the ruling Frelimo party rigged the results.

Renamo, which is the Portuguese acronym for National Resistance of Mozambique, fought the bloody civil war with backing from the white-minority regimes in South Africa and Rhodesia. When the war ended in 1992 it became an opposition party but never fully disarmed.

“This agreement has historic significance because up until now Mozambique has had an opposition party in parliament that also has armed fighters in the countryside. Now there can be peace,” Neha Sanghrajka, a negotiator of the deal, told The Associated Press.

Unlike in previous peace efforts in Mozambique, she noted, the important issues have been implemented before the signing.

These include an amnesty for rebel fighters that Nyusi signed earlier this week and a constitutional amendment that stipulates provincial governors and other local officials will be elected rather than appointed by the central government.

Mozambique could be a model for other countries trying to resolve long-lasting rebel conflicts through negotiations, because of the example of implementing key reforms before the actual signing, according to mediators. The agreement to end Colombia’s rebel conflict, for example, faced several difficulties in implementation after it was signed.

“Here in Mozambique, there has been implementation of 90% of the issues before the actual signing,” said negotiator Mirko Manzoni, the Swiss ambassador to Mozambique and the personal envoy of the U.N. secretary-general.

There is “tremendous symbolic value” in having the accord signed at Gorongosa, Manzoni added.

“Gorongosa was where the war started and now it is where it ends,” he said, pointing out that the mountain is in a strategic location in the center of Mozambique. “This agreement gives people hope that there will be lasting peace.”

Several countries have supported the peace process, including the United States.

“This is an exciting time of positive transformation in Mozambique,” said U.S. Ambassador Dennis Hearne. “There is significant investment in the energy sector on the horizon. Now with this signing and the initiation of demobilization and disarmament process we are at the beginning of an important transformation of the country’s politics which will be consolidated with the elections in October. It is a hopeful and exciting time.”

Renamo’s longtime leader Afonso Dhlakama died in Gorongosa in 2018. Momade succeeded him and is responsible for concluding the peace agreement.

“We will no longer commit the mistakes of the past,” Momade said this week as Renamo fighters started turning in their arms. “We are for a humanized and dignified reintegration and we want the international community to help make that a reality.”

Momade, who flew by helicopter from the rebels’ mountaintop camp for the signing, also said he hoped Gorongosa Park would help Renamo’s ex-combatants and their families re-enter society.

After falling into neglect during the civil war, the park that sprawls over 1,570 square miles has been re-invigorated with help from American philanthropist Greg Carr, who said he was inspired to take on the project after the late Nelson Mandela told him that wildlife parks should be places of national reconciliation and development.

The park has also helped surrounding communities recover after Cyclone Idai devastated large parts of central Mozambique in March, killing more than 600 people. More than 80,000 people are receiving food aid and help in planting crops, while aid groups warn that many others in the region face a hunger crisis in the months ahead.

“I’m excited at what the park can do in the next five years and beyond to help keep the peace,” said Carr, who attended the signing ceremony with dozens of ambassadors, generals, Cabinet ministers and nearly 2,000 local residents. “We need the park to deliver opportunities and benefits to the demobilized fighters to sustain the peace. Now it’s, ‘Go, go, go,’ for us to build on the achievement of this peace agreement.” — (AP)