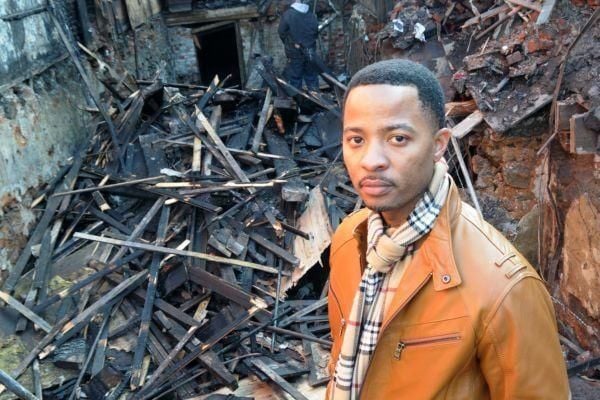 Elena’s Soul Food owner Algernong Allen III stands in front of his restaurant in 2013, after it was destroyed by fire. 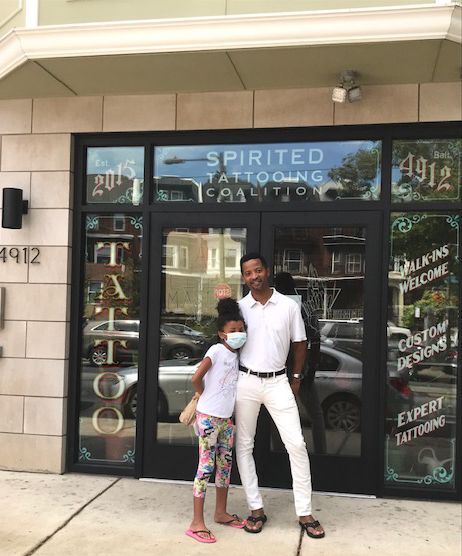 Allen with his daughter in front of his new building, which has five apartments and a commercial space.

Elena’s Soul Food owner Algernong Allen III stands in front of his restaurant in 2013, after it was destroyed by fire.

Allen with his daughter in front of his new building, which has five apartments and a commercial space.

Throughout Cedar Park in West Philadelphia, Algernong Allen III is known for creating memories in the neighborhood. A well-known developer, Allen owned Elena’s Soul Food Showcase Lounge and Cafe, which burned down in 2012.

Allen has restored the land at 49th Street and Baltimore Ave. and eventually built a rental property for commercial and residential use. But the transition from Elena’s Soul Lounge didn’t happen overnight.

“It wasn’t that sweet,” he said. “After figuring things out, it’s like a wave. You try to stop drowning, and even after the wave stops, you still have to swim. For a while, the place was just there but I still owned the property.” Allen needed to figure out how to build a whole new building.

After the fire, Allen rented the property out to Greensgrow, an urban farm, for almost two years. In the meantime, he focused on paying off lenders and building relationships with developers. Allen formed a partnership with Diversified Realty Ventures and CVA Commercial Group and created a plan to rebuild 4912 Baltimore Pike.

“The developers were instrumental. Their experience as developers was instrumental in getting us the decision of what it was going to be,” said Allen. The reconstruction took over two years.

So, what happened to Elena’s Soul Lounge?

In 2008, Allen opened what became one of the most memorable soul spots in West Philly in the heart of Cedar Park. Elena’s Lounge, named after his late mother, was built for the community and the sake of good vibes, Allen said. His concept for Elena’s was a “Black version of Bennigans.”

“If Bennigans can have an Irish theme, we can have a Black theme,” Allen figured. He decorated Elena’s with pictures of famous Black activists and artists, including Martin Luther King Jr. Elena’s was known for entertainment, with well-known Philadelphia performers including Kindred, vocalist Jaguar Wright and R&B artist Bilal.

Tragedy hit Elena’s a few days before Christmas in 2012. The fire on Dec. 23 took firefighters two hours to control.

“Imagine coming back to your business after stepping out and there’s craziness going on, massive helicopters, they’re hundreds of people on the street, and you’re just watching your livelihood just go up in flames,” Allen said.

The fire was caused by electrical issues.

“It was an electrical fire somewhere above the kitchen in the ceiling,” Allen said. “At that point, the building was over 120 years old.” Once fire marshals and the city ruled out the possibility of arson, Allen and his team decided not to dig any deeper due to the expense of the investigation.

Allen couldn’t focus on opening up another restaurant. It took him three years to pay off the debt he had owed and incurred from the fire.

After years of dealing with litigation, Allen focused on his next step, building a rental property. Once a plan was in place, Allen and his team spent two years meeting with the community, lobbying for the project, obtaining zoning approvals and then constructing the three-story building.

The building, between Cedar Park Cafe and PT Nails Plus, has five residences and a commercial space occupied by Spirited Tattoo Coalition. The three two-bedroom and two one-bedroom apartments are all occupied. The rents start at $1,350. Allen now has full ownership of 4912 Baltimore Pike.

Allen spent his career as a real estate agent before opening Elena’s. ”I’ve always been in real estate even before owning a bar and restaurant. That’s my background. For me, real estate is the swimming pool that I swim in,” he said.

Allen grew up on 48th and Westminster. He’s known in the community and is a regular at the local food truck down the street from his rental space.

Elena’s was a place where everyone could gather, Allen said in an interview in 2013.

“It was having a place where people could gather together, converse and dine with one another.”