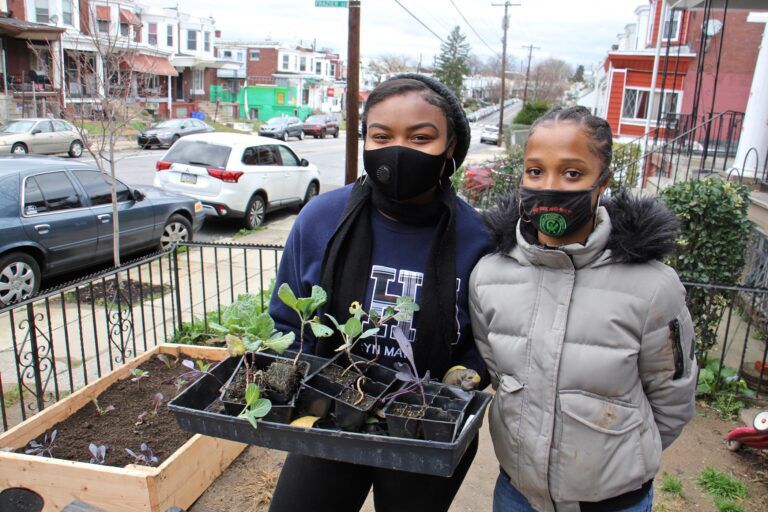 Princess Rahman, left, and Hajjah Glover finish installing a raised garden bed for a resident in Southwest Philadelphia. Glover and Rahman, who are with the Sankofa Community Farm, planted starters that can survive what is left of the growing season. — Emma Lee/WHYY 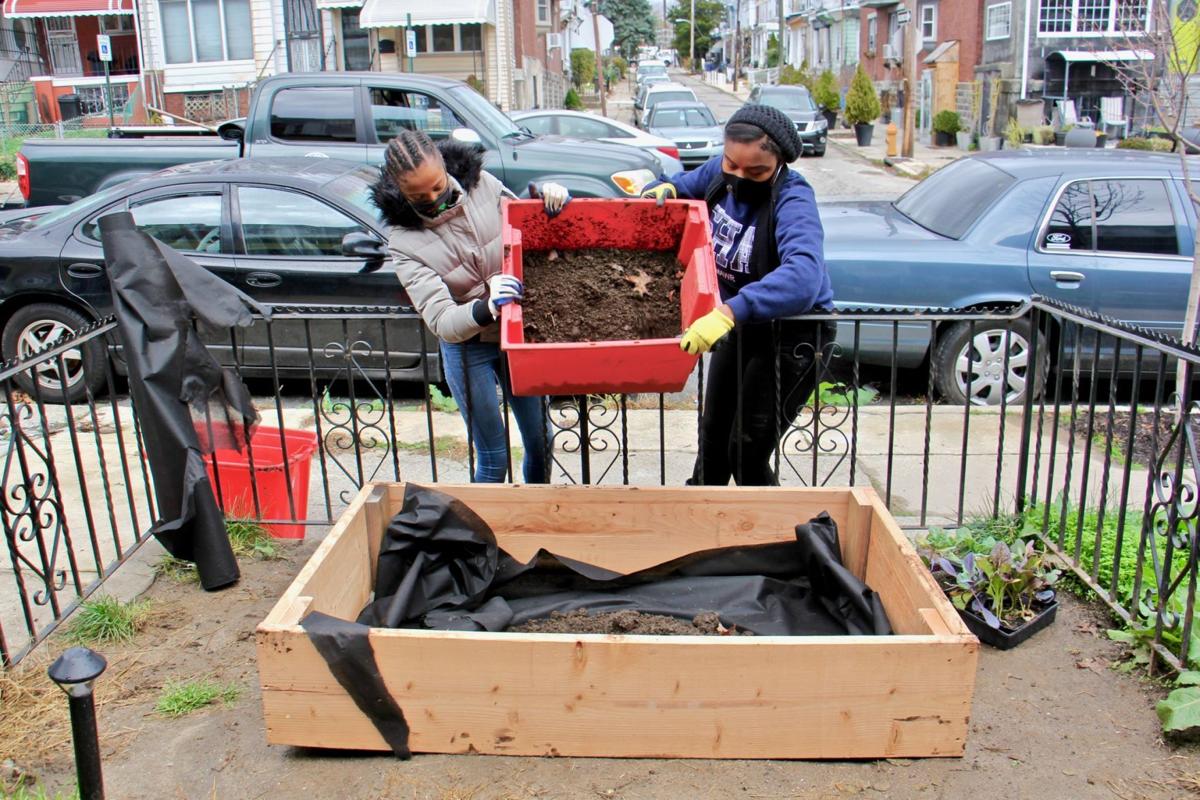 After installing the raised garden bed in a yard on Thomas Avenue, Glover and Rahman of Sankofa Community Farm add soil. — Emma Lee/WHYY

Princess Rahman, left, and Hajjah Glover finish installing a raised garden bed for a resident in Southwest Philadelphia. Glover and Rahman, who are with the Sankofa Community Farm, planted starters that can survive what is left of the growing season. — Emma Lee/WHYY

After installing the raised garden bed in a yard on Thomas Avenue, Glover and Rahman of Sankofa Community Farm add soil. — Emma Lee/WHYY

Earlier this week, as a winter chill started nibbling the air, two members of a Southwest Philadelphia community garden installed a raised garden bed in the front yard of a homeowner on Thomas Avenue.

After dumping about 15 cubic feet of soil into the newly constructed wooden box, Hajjah Glover and Princess Rahman planted starters that can survive what is left of the growing season.

“We have some purple cabbage, which looks beautiful and adds a pop of color and grows really well in winter,” said Glover, opening up a hole in the soil with her gloved hand. “What I like to do is rip up the roots, break the roots, plant it, say a little prayer and then we do another one.”

Glover and Rahman are with the Sankofa Community Farm. Saying a little prayer, as Glover did silently, is part of Sankofa’s mission to bring African spirituality and heritage to community gardening.

“The word Sankofa comes from the Twi language in modern Ghana,” Glover explained. “It means, ‘Go back and get it.’ Go back and learn your culture, bring it to the present and wear it like armor.”

Glover directs Sankofa’s home garden program, personally building and installing 56 raised beds at individual homes this year. Earlier in the year, before the pandemic, Sankofa advertised to anyone with a yard in Southwest Philadelphia to sign up to receive a raised bed. The program is subsidized by the U.S. Department of Agriculture and the Pennsylvania Horticultural Society, enabling Sankofa to charge just $25, about 80% less than the cost of the raw materials.

The bed installed on Thomas Avenue now belongs to Colleen Goodwyn, who lives there with her two dogs, two cats, and 9-year-old daughter. She said she had never gardened before, but always wanted to grow her own food.

“This is a totally new experience for me,” Goodwyn said. “I have some books on it. I just really needed some help getting started.”

Goodwyn has a backyard but prefers to have the garden bed in front of her rowhouse, inside a small yard with a wrought iron fence that abuts the sidewalk.

“I get more sun up here, and I think it would be nice for the neighbors to see,” she said. “I would be happy to share any food I grow.”

Neighbors seeing neighbors grow food is exactly what Sankofa wants to foster. The project stems from the urban farm’s mission to build community. While Sankofa has its own greenhouse and agriculture operation that produces about 15,000 pounds of food annually on the grounds of the historic arboretum Bartram’s Garden, the ultimate goal has always been to spread a network of gardeners across the neighborhood.

“Say Miss Emma down the block talks to Miss Shirley. Miss Emma has way too many tomatoes and Miss Shirley has way too many cucumbers,” said Sankofa co-director Ty Holmberg, offering a hypothetical situation. “Sankofa wants to be there if they need us, but what’s more ideal, if we’re talking about food sovereignty, is Miss Emma answering questions from Miss Shirley, and they are supporting each other.”

Next year, Sankofa will turn 10 years old. It launched with a grant from the USDA that supported the building of the four-acre farm. In hindsight, Holmberg believes the start of Sankofa was too focused on producing food, not enough on building relationships.

“I wish we had taken more time to do more deep community listening,” he said. “From the start, we should have developed a community elders board that was guided by folks in the community. I think we got there, but it took us time.”

Sankofa designed the home garden project to give Southwest Philly neighbors the tools and knowledge to grow food on their own turf. While they are initially given starter plants that are associated with traditional African foodways — okra, collard greens, butter beans — they ultimately can do whatever they wish.

When Holmberg and his co-director Chris Bolden-Newsome started Sankofa in 2011, the wider cultural project was to use gardening as a form of healing, to reconnect people with the earth under their feet.

“As Chris often says, ‘The land is the scene of the crime in the U.S.,’” Holmberg said. “After 400 years of enslaved people and the benefits of that free labor, we are providing space for African-descended people to rebuild their relationships to the land. That’s what separates us from other urban agriculture spaces in the city. That is our priority.”

The season for building and installing raised beds is now coming to a close, with plans to do more neighborhood outreach and install more beds next year. In the meantime, Holmberg hopes to establish an online portal where participating neighbors can interact with each other, to share tips, ask questions and see how everyone else is doing.