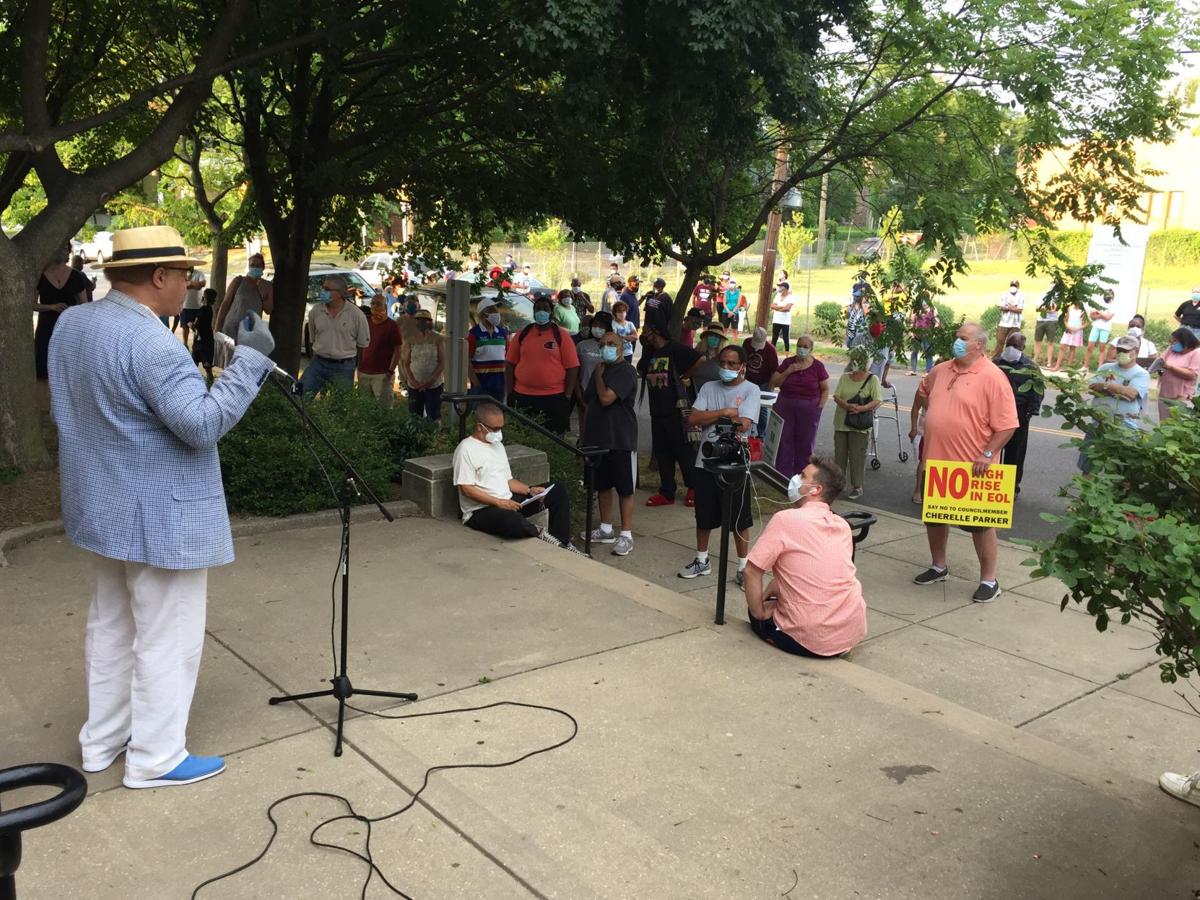 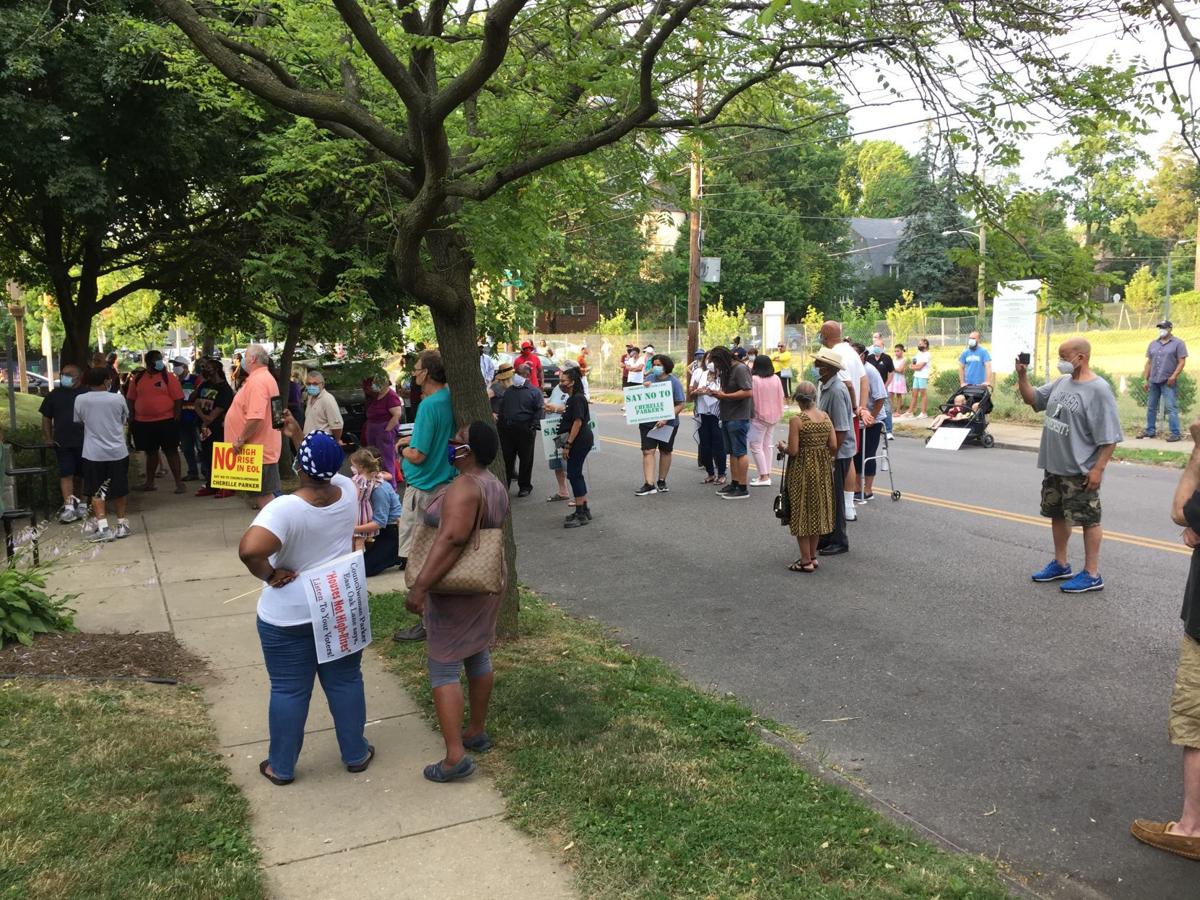 More than 70 people gathered on Thursday to voice their opposition to the proposed $15.1 million project, which still needs a city’s zoning variance and state tax credits to be built.

More than 70 people gathered on Thursday to voice their opposition to the proposed $15.1 million project, which still needs a city’s zoning variance and state tax credits to be built.

East Oak Lane opponents of a mixed-income housing development in their neighborhood plan to protest again, though no date has been selected, according to a community organizer on Wednesday.

The Refuge Evangelical Baptist Church aims to construct a $15.1 million four-story apartment building on a vacant lot at 1122 Oak Lane with 40 one-bedroom apartments for senior citizens. Ninety percent of the units would be priced at or below $1,000 a month.

The church and its development partners — Conifer Realty and BCM Affordable Housing — need a variance from the city’s Zoning Board of Adjustment and tax credits from the Pennsylvania Housing Finance Agency to build the project.

David Anker, a member of the Oak Lane Community Action Association, organized a protest last week in front of the Oak Lane Branch Library at 6614 N. 12th St. It gave more than 70 residents in attendance last Thursday an opportunity to voice their displeasure about the project, which is being supported by Councilwoman Cherelle Parker.

Anker has concerns about the construction and the negative effects the development may have on the community.

“The effect this high-density development in this location would have on residents includes increased risks to safety from traffic and congestion including for next-door Ellwood Elementary, pressure on existing infrastructure insufficient to support these added residences including making Oak Lane impassible for the next-door Fire Station,” he said.

The proposed complex would be built on the vacant lot, which is across the street from Oak Lane Library.

“I was proud to stand with my neighbors and to voice our opposition to this ill-placed development,” said Milay Galvez, a resident of East Oak Lane. “For years we have had a dialogue with the property owner and Cherelle Parker, and consistently rejected their plan but they have been deaf to the majority voice in East Oak Lane.

“This leaves us with no other recourse than to protest to preserve our neighborhood and the families living here,” Galvez said.

Displayed on the church’s website, visitors can listen to a video message from Wilbert S. Richardson, pastor of Refuge Evangelical Baptist Church, about the Gwendolyn Richardson Arms senior living apartments. In the video, Richardson describes the housing complex as a “need” and welcomes questions.

Richardson also provides a blueprint of the proposed apartments along with sponsors, which include Conifer Realty and BCM Affordable Housing. Parker isn’t listed as a sponsor on the brochure, but residents are calling her one.

Richardson told the Tribune last week that plans were launched in 2016 to build affordable housing for senior citizens on the church-owned property.

“There is absolutely no affordable housing in East Oak Lane. Period,” he said, citing a dearth of options in the area.

Yvette Young, who lives next to the now-vacant site, envisions what she considers better options for the land.

“I would love for the church to open the lot for the community, so kids can play there, the community can plant there,” she said. “I would love for it to continue to be a green space. This is a zoning change, the church is asking for a variance, and variance is temporary. They’re building a structure that’s going to be there permanently and that’s going to violate the high restrictions, the whole use of this space.”

The Gwendolyn Richardson Arms apartment amenities would include a community green space, according to the plans.

Young points out congestion from the numerous apartment complexes already run along 11th and 12th streets.

“There’s probably about 50 apartment buildings in the vicinity of 19126 and in this area,” she said. “While they may not specifically be for seniors, there’s a lot of high-density housing already.”

Young is afraid of losing her comfort. “I’ll be directly impacted by losing my sunlight, my privacy. They’re asking me to sacrifice my front yard, my porch, and my backyard,” she said.

Like many others, Anker thinks the development is not a bad idea, but it is not the best idea for that particular site.

“Simply put, that location is the wrong one for this project,” he said. “We welcome such a development elsewhere in our area, but firmly reject the plan and call out Cherelle Parker for supporting the project and ignoring the will of the majority of East Oak Lane residents.”

Parker said in a written statement that her office has held two community meetings about the project and met with the board of the Oak Lane Community Action Association.

"My support for this project stems from the clear and growing need for senior housing and the benefits it will bring to this community including new and improved sidewalks, better pedestrian lighting, and an exterior green space that will be open to the public," she said. "This area is one of the community gems of the 9th District."

This story was updated at 2:45 p.m. July 9 to include comments from Councilwoman Cherelle Parker.