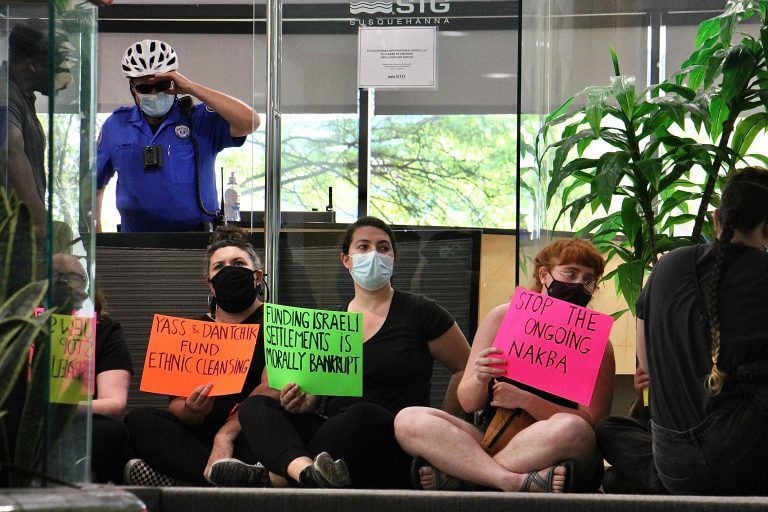 Rabbi Alissa Wise, Arielle Klagsbrun and Rachel Kipnes, from left, are among a dozen protesters who staged a sit-in at Susquehanna Investment Group in Bala Cynwyd. The group charges Susquehanna’s wealthy founders with supporting the displacement of Palestinians by Israel. — WHYY photoS/Emma Lee 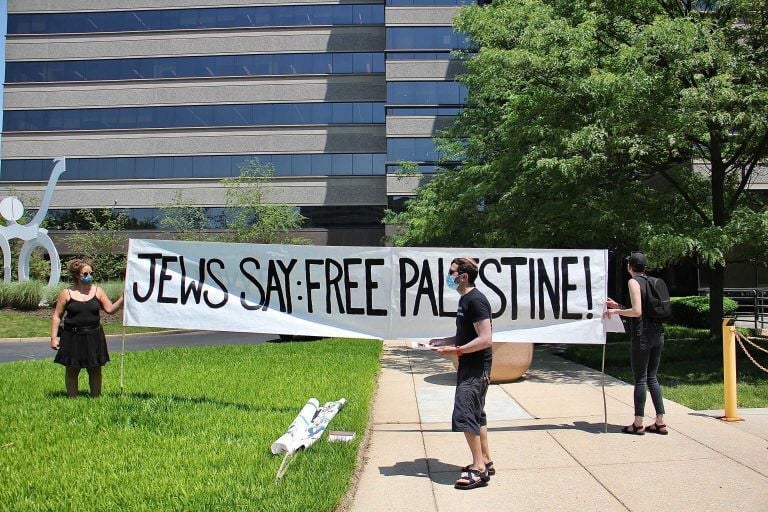 Protesters unfurl a banner outside Susquehanna Investment Group in Bala Cynwyd while others stage a sit-in inside the building.

Rabbi Alissa Wise, Arielle Klagsbrun and Rachel Kipnes, from left, are among a dozen protesters who staged a sit-in at Susquehanna Investment Group in Bala Cynwyd. The group charges Susquehanna’s wealthy founders with supporting the displacement of Palestinians by Israel. — WHYY photoS/Emma Lee

Protesters unfurl a banner outside Susquehanna Investment Group in Bala Cynwyd while others stage a sit-in inside the building.

After 11 days of violence in Gaza and hours into a fragile cease-fire, local activists picketed a company owned by two Montgomery County financiers over their support for right-wing groups that promote efforts to build illegal Jewish settlements in the occupied Palestinian territories.

A dozen members of the local chapter of Jewish Voice for Peace, a progressive group that advocates for an end to Israeli occupation, flyered employees’ cars and staged a sit-in at the lobby of Susquehanna International Group.

The finance firm was co-founded by billionaire Jeffery Yass and Arthur Dantchik, who together have funneled money to a conservative group that promotes religious Zionism and Jewish settlements in the West Bank, according to investigative reports from the liberal Israeli newspaper Haaretz.

Rabbi Alissa Wise, one activist at the sit-in, said that recent violence triggered the protest action, but that they also intended to draw both SIG employees and the public’s attention to the duo’s broader support for policies they say helped spark the conflict.

“Here in Philadelphia, it’s like, ‘Oh, our neighbors are funding Palestinian dispossession and Israeli apartheid,’” Wise said. “It felt very important, after the cease-fire, that we not take pressure off.”

Yass is among the wealthiest individuals in Pennsylvania and, along with Dantchik, has long promoted right-wing politics domestically through a network of think tanks. But both have also been linked by Haaretz to the Kohelet Policy Forum, an influential conservative think tank in Israel that supports nationalistic politics, including the settlement of the West Bank.

The recent violence broke out after the displacement of Palestinian residents in the East Jerusalem neighborhood of Sheikh Jarrah, which is claimed by Israeli settlers. While Israeli courts have ruled in favor of those who say the land historically belonged to Jews, the larger resettlement efforts of occupied territory are regarded by many in the international community, and groups like Amnesty International, as illegal.

Groups such as Kohelet Policy Forum instead maintain the initial conflicts were over a “property dispute” involving Palestinian “squatters.”

“The Israeli government has not decided to evict anyone in the current disputes. It is private parties, rather than the government of Israel, that have brought their claims to court,” the group wrote in a statement. “Contrary to the claims of the critics, there is nothing in the Geneva Conventions or any other part of the laws of belligerent occupation that forbids Israel to carry out court orders enforcing private property rights of landlords to evict their overstaying tenants.”

But Wise argued that the SIG partners’ support for the group and its policies had, in turn, contributed to the incitement of unrest and violence triggered by displacement.

“Kohelet Policy Forum is behind some of the most dreadful and regressive policies of the state of Israel,” she said. “While there is a cautious cease-fire right now over the violence that’s happened over the past few weeks in Gaza, the settlement enterprise … continues. And they’re the key funders in the United States.”

Activists demanded that Yass and Dantchik cease their financial support for the group, and asked SIG staff for an audience with the men.

After several hours, police officers, protesters and a company representative brokered an arrangement that allowed the activists to leave a voicemail for Yass in exchange for exiting the building.