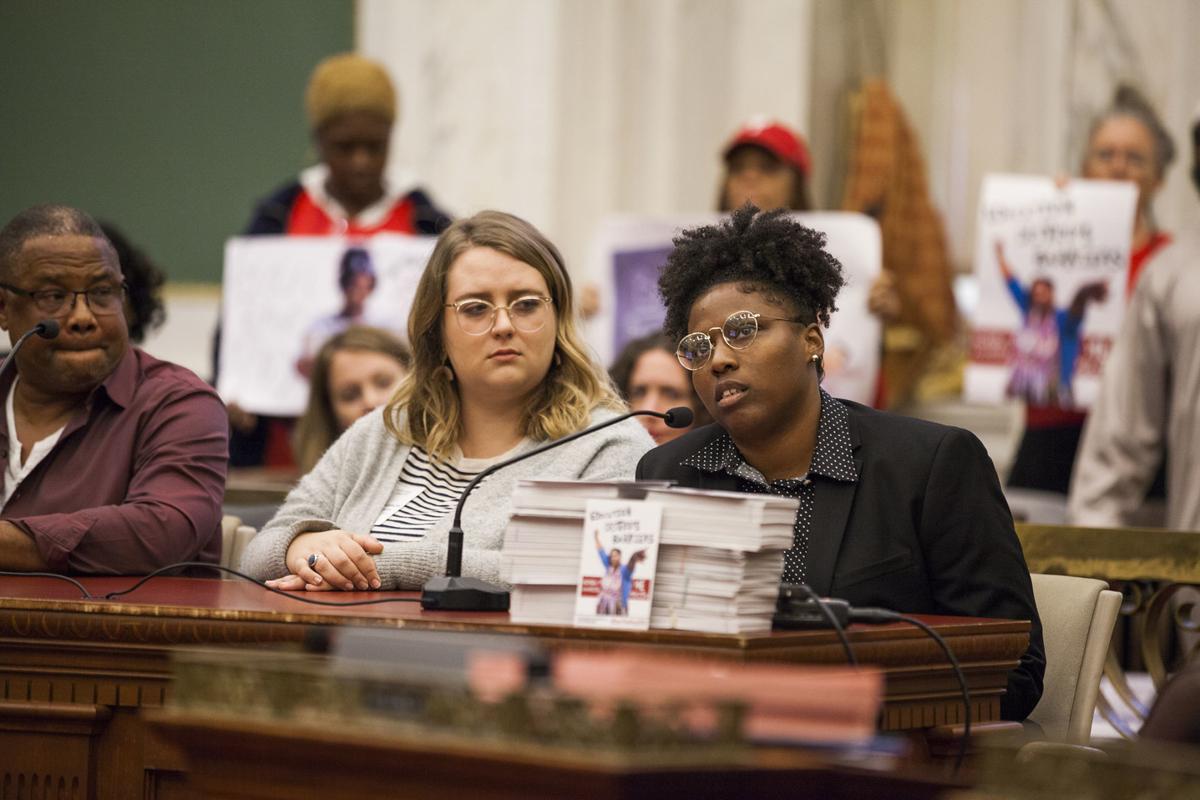 Mary Baxter, right, testified at the City Council committee hearing on Tuesday regarding changing the law. With her are Jym Baker, left, of the Reentry Think Tank and Sage Carson of Know Your IX. — PHOTO COURTESY OF MARK STRANDQUIST 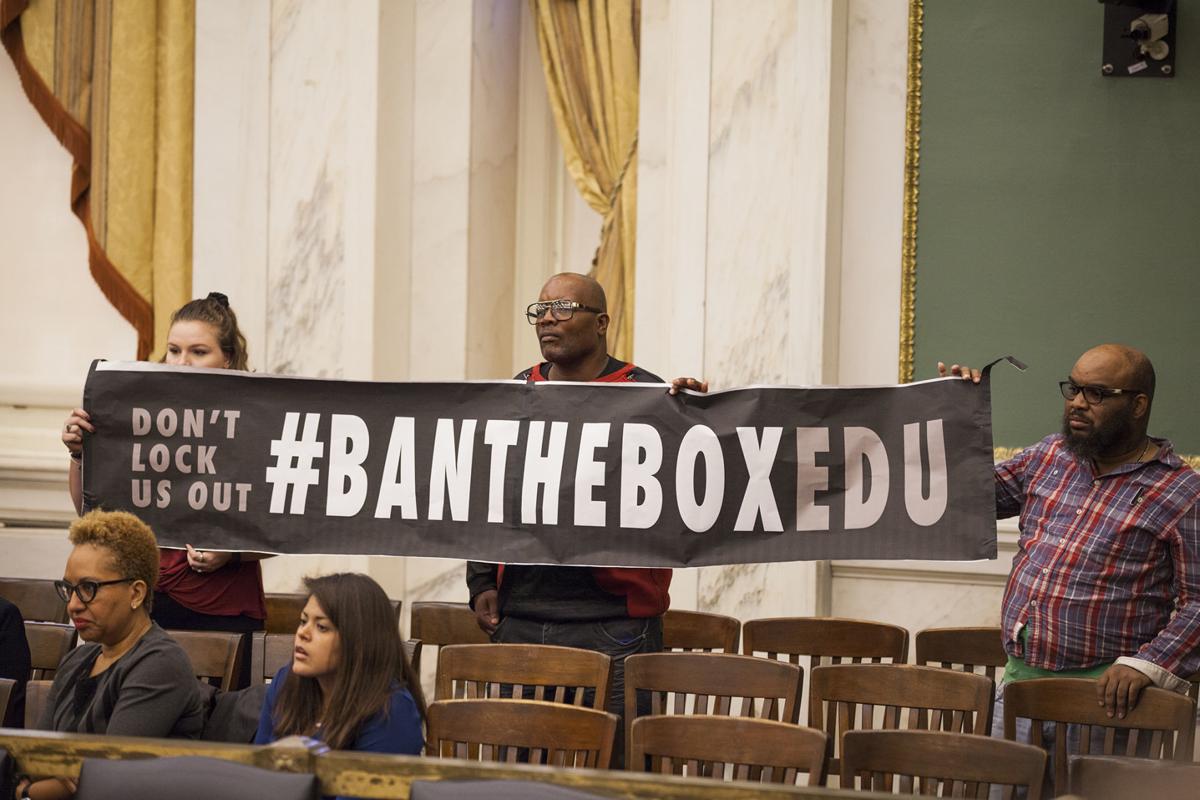 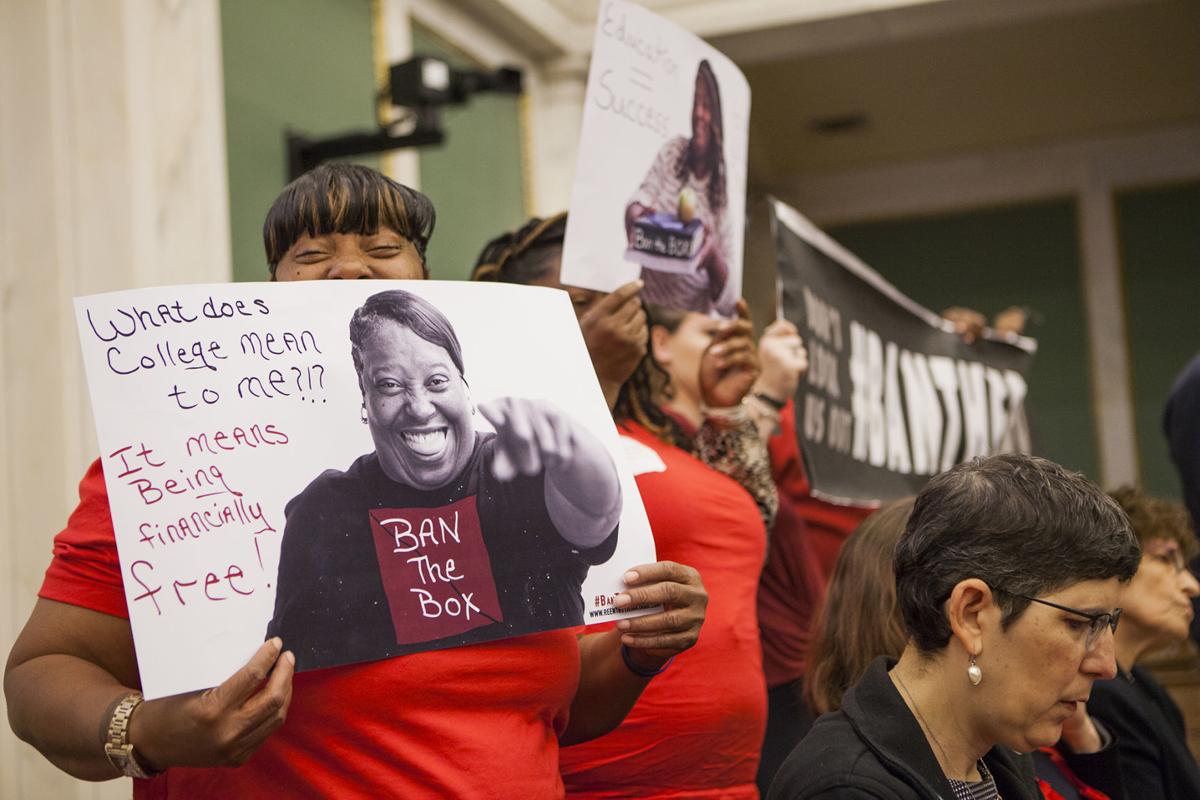 Supporters want to revise the city’s “ban the box” ordinance to help former felons in applying for college admission. 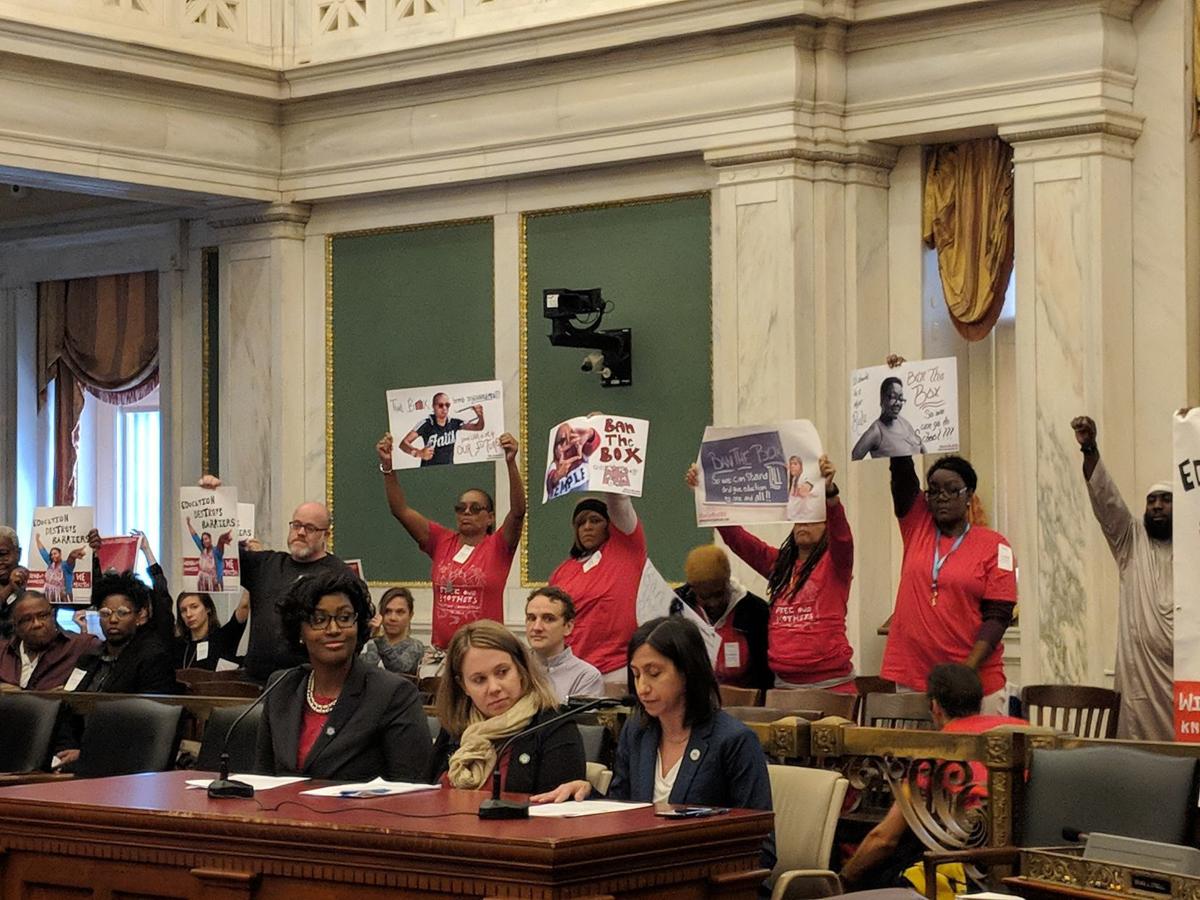 Tracie Johnson and Jamie Gullen, both of Community Legal Services, along with Rue Landau, executive director of the Philadelphia Commission on Human Relations, testified as others voiced their support to revise the “ban the box” ordinance.

Mary Baxter, right, testified at the City Council committee hearing on Tuesday regarding changing the law. With her are Jym Baker, left, of the Reentry Think Tank and Sage Carson of Know Your IX. — PHOTO COURTESY OF MARK STRANDQUIST

Supporters want to revise the city’s “ban the box” ordinance to help former felons in applying for college admission.

Tracie Johnson and Jamie Gullen, both of Community Legal Services, along with Rue Landau, executive director of the Philadelphia Commission on Human Relations, testified as others voiced their support to revise the “ban the box” ordinance.

Mary Baxter thought her past was behind her.

Ten years after she served seven months in prison for two felonies, Baxter earned two degrees from the Community College of Philadelphia. Her next step: Transitioning to a four-year university.

But when the Philadelphia resident began the application process, her past came flooding back: She had to reveal that she had a criminal record on applications.

“It didn’t matter that I had a 3.7 [GPA], it didn’t matter that I was a member of Phi Theta Kappa and I was in the student leadership … society,” said Baxter, 36. “None of it mattered when it came to that point. It was just me being defined by this one thing that I did that has continued to follow me over a decade since my release.”

On Tuesday, Baxter joined advocates and experts to testify before a City Council committee in City Hall about expanding the ban on asking about criminal histories — known as “ban the box” — to the college and university application process in the city, and to gauge the interest of those local institutions to do so.

“If Philadelphia is serious about ending mass incarceration, ending educational discrimination and increasing access to education both inside and outside of prison, (this) is essential,” testified Jamie Gullen, supervising attorney in the Employment Unit at Community Legal Services of Philadelphia.

The practice of asking about prior criminal records on college applications “has a disparate impact on youth of color, who are over-criminalized at alarming rates,” testified Rue Landau, executive director of the Philadelphia Commission on Human Relations.

The city currently has a ban the box ordinance in effect that prevents public and private employers from asking about an applicant’s criminal record during a job application and prohibits employers from considering background checks before giving an applicant a conditional offer, among other things.

Since the Fair Chance Hiring law went into effect in 2011 and revised in 2016, the commission has investigated 154 complaints related to non-compliance, Landau said.

Councilman Curtis Jones, chairman of the Committee on Public Safety who called for the hearing, said that if the city expects people to become productive members of society, no barriers should stand in the way of that goal.

“Why should there be a glass ceiling based on that box?” Jones asked.

However, any resolution to expand the ban to educational institutions would be non-binding.

Jones said he was drafting a letter to local colleges and universities to get more information.

Also testifying on Tuesday were representatives from the Re-entry Think Tank and People’s Paper Co-Op, which collected more than 1,000 petition signatures in support of banning the box on college applications.

For Black youths in Philadelphia, extending the ban to the college application process could be critical.

Black youth in Philadelphia are 3.64 times more likely to be arrested and prosecuted in the juvenile court system compared with their white peers, said Tracie Johnson, a fellow at Community Legal Services. Overall, upwards of 500,000 Philadelphians have some kind of prior criminal record.

“Therefore, asking about criminal records on college applications shuts out scores of young people, women and people of color with criminal records without any legitimate justification,” Johnson said.

The decision to ask about prior criminal records during the application process now rests entirely with individual colleges and universities, and nearly all in the region do, Gullen said.

“But now, the ball is really in the court of local area colleges and universities who each, one by one, will make a decision about whether they’re going to continue this practice of asking about prior criminal records,” Gullen said.

In addition, Gullen said questions remain about how colleges are using the information.

“Because the admissions process is a ‘black box,’ it is impossible to know exactly how Philadelphia-area schools are evaluating criminal record information,” she said.

But the Common Application continues to ask about student disciplinary history while in school, and colleges who use the application still can request supplemental information.

Baxter, who testified about her experience with the college application process, said being asked about prior criminal history also acts as a “huge deterrent” preventing many from even submitting an application.

“It’s very intimidating to try and sift through that in a way where the person can get a full picture of you and have some empathy and see you as a whole person, and not just define you by this one instance where you were arrested and sentenced,” Baxter said.

Baxter got into the majority of the schools she applied to. But paying for college was her next hurdle. Unable to fully pay tuition, she entered the workforce with the goal of eventually going back to school.