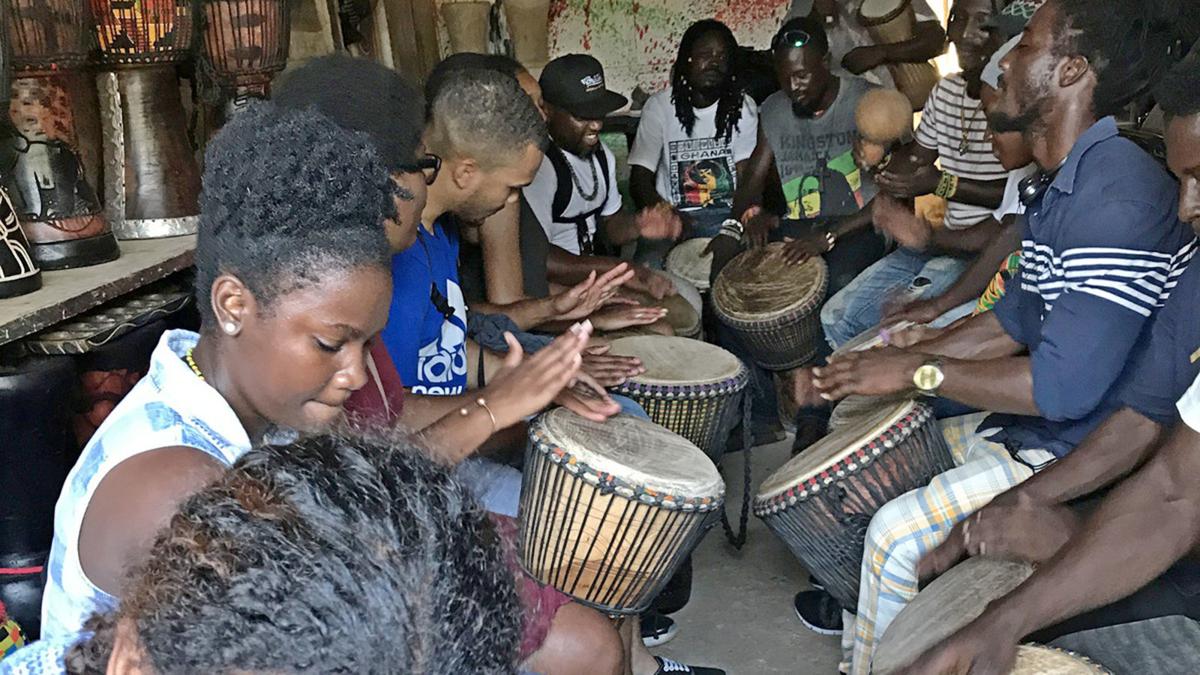 Students in the Birthright Africa program beat drums with artisans from the Arts Centre Market in Accra, Ghana. — Submitted photo 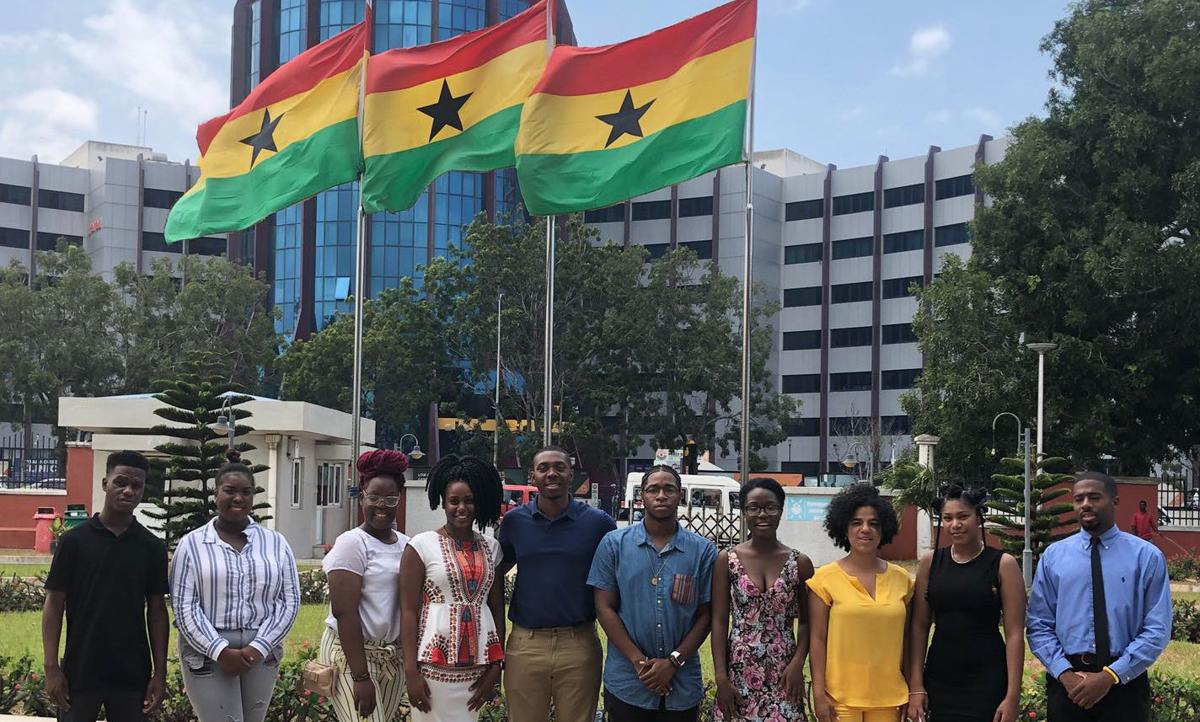 Students on a Birthright Africa trip to Ghana in 2017. — Submitted photo

Students in the Birthright Africa program beat drums with artisans from the Arts Centre Market in Accra, Ghana. — Submitted photo

Students on a Birthright Africa trip to Ghana in 2017. — Submitted photo

There are a lot of things that make up who we are as people. Our physical features, our pet peeves, our passions — and our roots. It’s a puzzle we spend our entire lives trying to finish.

As human beings, we are complex and difficult to understand. But sometimes, looking back at where we came from and discovering the successes, struggles and sacrifices of our ancestors can make that puzzle a bit more complete.

For young Black people, that discovery can mean the world.

That’s why Birthright Africa, a nonprofit organization based in New York City, offers free trips to Africa for youth and young adults of African descent looking to explore their cultural roots. The organization also funds local and national exploration in cities like New York City and Washington, where scholars live and are a bus ride away from gaining an understanding of their history and contributions in the U.S. before visiting the continent.

“National Black History Month often focuses on the past, but this is about creating an infrastructure so that we can help people transform their futures,” Birthright Africa co-founder Diallo Shabazz told CNN.

“This isn’t about validating Black identity. It’s about providing an opportunity for people to explore their ancestry. “

An education you can’t find at school

One of Birthright Africa’s most important goals is giving young scholars the knowledge that the American school system often fails to provide.

Those who go on the trip visit cultural sites, museums, universities, and organizations managed and led by people of African descent to learn about the “historic and present-day resilience and brilliance of their heritage often lacking in our school curriculums,” according to Birthright Africa co-founder and CEO Walla Elsheikh.

While it’s been more than a half a century since the Supreme Court’s Brown v. Board of Education ruling found that “separate but equal” has no place in U.S. public schools, true racial equality in our education system has yet to exist.

Although Black students in colleges have more access (and freedom) to choose their own courses, when it comes to study-abroad programs, the lack of diversity and equal opportunities continues.

“To address this gap in diversity and talent, Birthright Africa is creating the next generation of global leaders and entrepreneurs that are proud of their African heritage, confident in their innovative aspirations and connected to the African continent.”

”My life will never be the same”

While tourists visiting Africa are more likely to remember the food or safaris, those who have taken the birthright trip have something else to cherish.

For Shaina Louis, a 23-year-old Haitian student born and raised in New York, her birthright trip to Ghana in 2018 as a student at the City University of New York gave her one thing she’d never expected to find: closure.

“Prior to Birthright Africa, I had a lot of pent-up resentment and antagonism due to a history that I felt my people had no say in. For those of us in the diaspora, our history, according to the textbooks, starts with slavery. I was doubtful and kind of cynical about what the future held not only for me as an individual, but also for Black people as a whole,” Louis told CNN.

After years of wondering where she fit in in a world where her ancestors were “stifled” and doubting the connection between Africa and those whose were forced to leave, Louis finally got the answers to all of her unspoken questions.

“We may not speak the same language, but the foods we eat, the way we carry ourselves, the way we relate to one another, and our deeply ingrained spirituality reflect a bond that is still there,” she said. “There is a sense of inner peace and ease I now have that wasn’t there before. I can move forward with my life, with intention behind everything I do.”

Kareem Williams, a 26-year-old scholar who went to Ghana on his birthright trip in 2019 as a participant of community-based GrowHouse NYC, said he felt extremely disconnected from his Jamaican roots while growing up in New York.

What surprised Williams the most, he said, was the kindness he received from people in the country. Unlike the “feeling of separation” he’s experienced in the U.S., for once, he felt like he belonged.

“Before I had even touched down in Ghana, the energy I felt as I got closer to Africa, I felt a rush, a vibration, and it was so strong,” Williams said. “It felt like something was pulling me towards the country. It felt surreal.”

Visiting Ghana, he said, made him feel that he had a place where he didn’t have to “constantly face resistance,” an environment — and a system — that would help him thrive instead of hold him back.

“It has to do with the American system. There’s so much prejudice and micro aggressions that I didn’t feel in Ghana. I felt so connected to my ancestors for the first time. When I came back to the U.S., I realized how much it changed me. Like my life will never be the same.”

Now, Williams says he plans to someday return to Africa in hopes of getting into a position where he can become a global leader with the ability to influence reform, economic decisions and infrastructure to collaboratively strengthen African businesses and communities.

What it takes to take a birthright trip to Africa

To take a birthright trip to Africa, you have to be a U.S. citizen between 13 and 30 years old.

You also have to be of African descent; this includes African American, Afro-Caribbean, Afro-Europeans, Afro-Asian and Afro-Latinx, according to Elsheikh.

“We consider all Black people of African descent,” Elsheikh said.

Birthright Africa collaborates with high school, college or community-based organization that are then considered “partners.” These educational partners select the participants and the country they will visit as part of the Birthright Africa program.

Anyone who isn’t already a part of one of these education partners can register through the Birthright Africa website, which will then redirect them to a partner in their area with available spaces where they can apply.

Those who take the trip to Africa get to go for free — flights, hotels, food, and costs of museums are covered by Birthright Africa and the educational partners.

For those who aren’t interested in a trip but would like to help fund them, Birthright Africa heavily relies on donations.