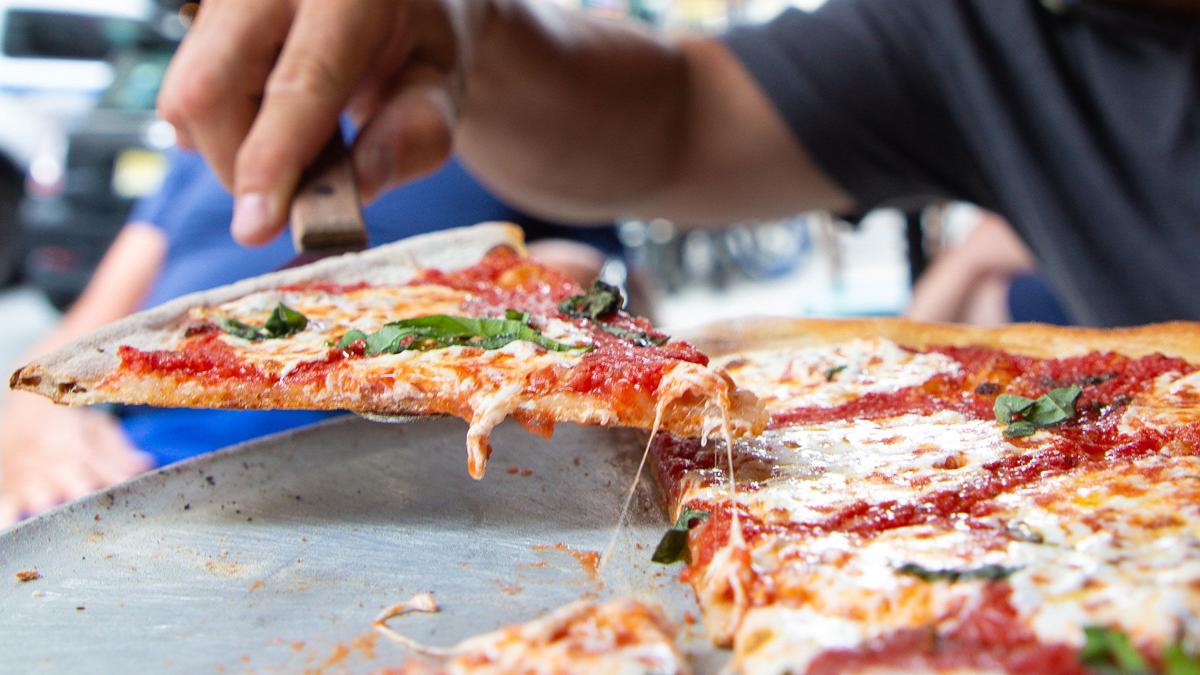 A Margherita pie is seen served at the famous Lombardi’s Pizza amid the COVID-19 pandemic on July 07, 2020 in New York, New York. In 1905, Lombardi’s Pizza was recognized as the First Pizzeria in the United States. 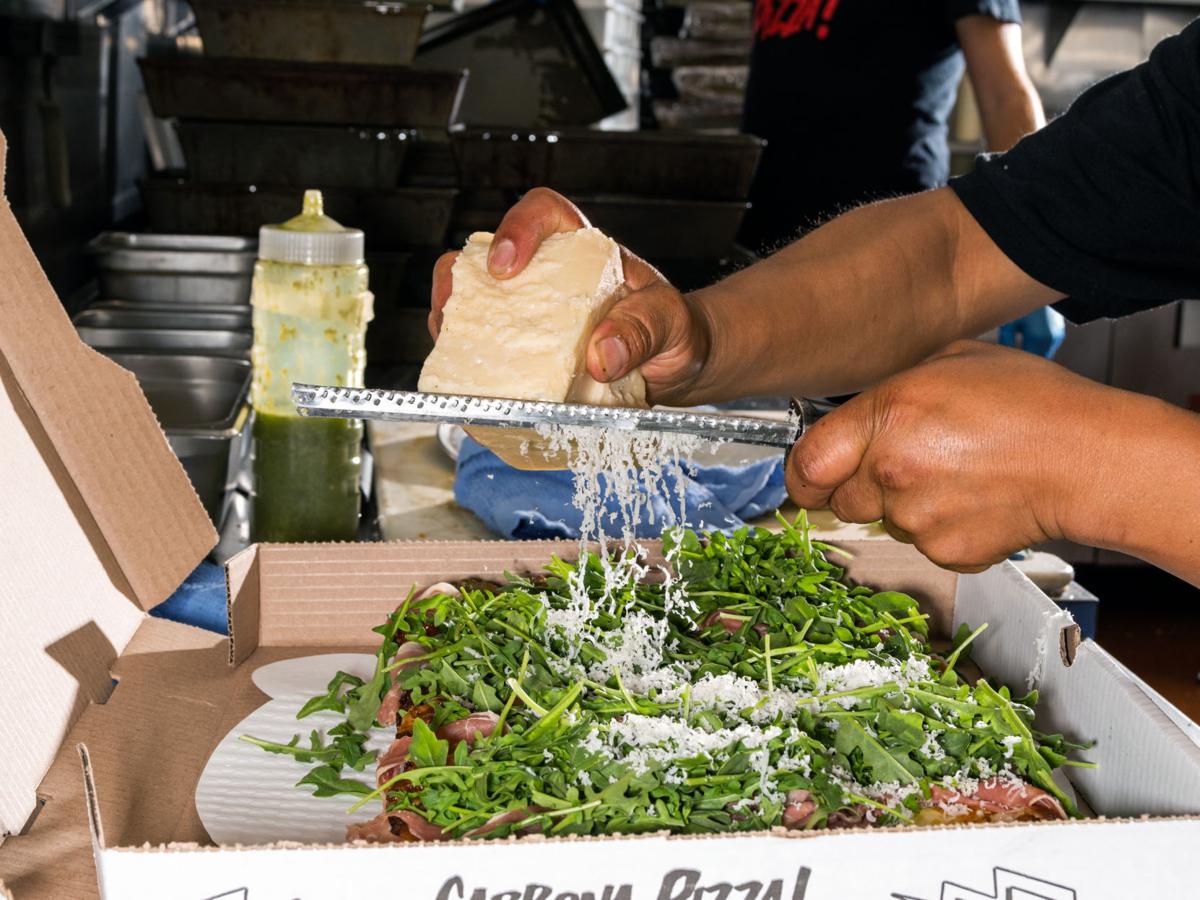 A worker grates cheese onto a pizza at Grand Lake Kitchen in Oakland, Calif., on June 25, 2021. Pizzas have became a staple of the restaurant’s takeout business. —Kelsey McClellan/The New York Times

A Margherita pie is seen served at the famous Lombardi’s Pizza amid the COVID-19 pandemic on July 07, 2020 in New York, New York. In 1905, Lombardi’s Pizza was recognized as the First Pizzeria in the United States.

A worker grates cheese onto a pizza at Grand Lake Kitchen in Oakland, Calif., on June 25, 2021. Pizzas have became a staple of the restaurant’s takeout business. —Kelsey McClellan/The New York Times

It’s not up to you after all, New York. And Chicago — the wind has been taken out of your deep dish sails.

The honor of best pizza city in the United States goes not to those traditional standard bearers of pizza but instead to that innovative West Coast upstart of Portland, Oregon.

That’s the ruling according to Nathan Myhrvold and Francisco Migoya, authors of the upcoming encyclopedic ”Modernist Pizza,” scheduled to be released in October.

At three volumes and almost 1,700 pages, it includes the history of pizza, more than 1,000 recipes, pizza-making techniques and tools plus tips on where to get the best pie — in exquisite detail and with stunning photos.

Myhrvold — who was the chief technology officer at Microsoft from 1996 to 2000 before leaving to pursue his other passions — told CNN Travel in a video interview that this labor of love took almost four years.

He said they managed to wrap up their pizza tours, which included visiting 250 pizzerias, before the Covid-19 pandemic shut things down.

How did Portland rise to the top?

Myhrvold said he had no idea when the pizza sleuthing ‘n’ sampling began that Portland would take the gold.

“We knew Portland had undergone a foodie Renaissance of sorts in the last 20 years. But I didn’t particularly think that pizza was going to be as good there as many [other] places.”

The Modernist team went to big cities and and smaller towns across the United States, some of them with long associations as primo pizza havens, to make comparisons. They were:

Quad Cities in Iowa and Illinois

What made Portland the standout? Myhrvold said it came down to innovation and passion to deliver the best.

Myhrvold gives credit to two artisan places — Apizza Scholls and Ken’s Artisan Pizza — as jump-starting the quality pizza scene. “If you’ve got a really good role model, that helps, versus other places where the pizza’s terrible.”

He thought that Scholls and Ken’s would be it for Portland, “but that wasn’t it at all. There’s just a huge, vibrant community of people making great pizza.”

He said there’s no one style that defines Portland pizza except for the commonalities of creativity, the emphasis on quality ingredients and “people wanting to do a great job.”

“In general, where you find good food, you find some obsessed person who is trying their damnedest to make their food the best they can.”

These are some of the pizza restaurants that received special nods and write-ups in “Modernist Pizza” in case you want to try them out for yourself. As well as checking out the menus, be sure to look into operating days and hours and your dine-in, takeaway and delivery options:

— Lovely’s Fifty Fifty: Myhrvold says it’s arguably one of the two best pizza restaurants in the country (the other being Razza in Jersey City, New Jersey). Lovely’s other specialty is ice cream. 4039 N. Mississippi Ave., Portland, OR 97217.

Others that get special praise, in alphabetical order:

Where did New York go astray?

This Portland proclamation is sure to stir emotions and cries of foul across America, especially New York City.

Myhrvold has some tough assessments about the current pizza scene as a whole, especially in Manhattan. Dollar-a-slice pizza and cheap pizzerias dominate there, he said. That wasn’t a compliment.

In his opinion, New York City is relying way too much on tradition and living off reputations instead of trying to present the best pies possible today.

“Most of the old-school New York ones aren’t that great, which is also part of our general finding around the world: famous old pizzerias are not up to their reputation. So if you go to a place in New York, and they say, ‘We’ve been doing this for 50 years’ — UH-OH!”

If you do want good pizza in New York, Myhrvold said you have a better chance of finding a good restaurant in the boroughs or the ‘burbs.

“I like Razza better than the pizzerias in New York City proper, certainly in Manhattan proper. That’s a little bit surprising to New Yorkers.”

Pizza around the world

Pizza is not just an Italian invention and an American obsession. People love it all over the world, and they add their own twists.

Not to say there isn’t good pizza in the founding land.

“In Italy, there’s some fantastic pizzas. I’ve had great pizza in Naples, and in a little town outside Naples called Caiazzo.”

Myhrvold said two cities that caught his attention and taste buds for pizza are Sao Paulo, Brazil, and steak powerhouse Buenos Aires, Argentina. Both of these South American cities had substantial numbers of Italian immigrants in the 19th century, especially from Naples, he said.

Myhrvold isn’t too wild about creativity just for its own sake.

He and his team went to Seoul, South Korea, and Tokyo. “And there are some very good pizzas there. But there are also a lot of pizzas that have, for my tastes, weird st on a pizza. Squid tentacles and sweet potato cubes are just a weird combination.”

Why three volumes about pizza in particular?

He was also drawn to pizza’s versatility and even the controversy.

There are “so many arguments about what makes great pizza. ... If you look at a steak, a steak is pretty much a steak around the world. ... Not true with pizza. The different forms of pizza are all over the map, literally. And it causes people to have violent disagreements and so forth.”

How did the “Modernist Pizza” authors come up with almost 1,700 pages on the topic? “We had to stop somewhere.”

He conceded he’s bad about judging the size of his books. “I always think it will be smaller than it turns out to be.”

“Modernist Pizza” is aimed at people who are “passionate and curious about food.”

He said you don’t have to be an accomplished cook to get something out of the volumes. “Meanwhile, if you cook a lot, but you’re not curious, and you just want to follow a recipe, boom, boom, boom, well, there are a lot of smaller books you could buy.”

As for the next project from the Modernist team — get ready for pastries and desserts.