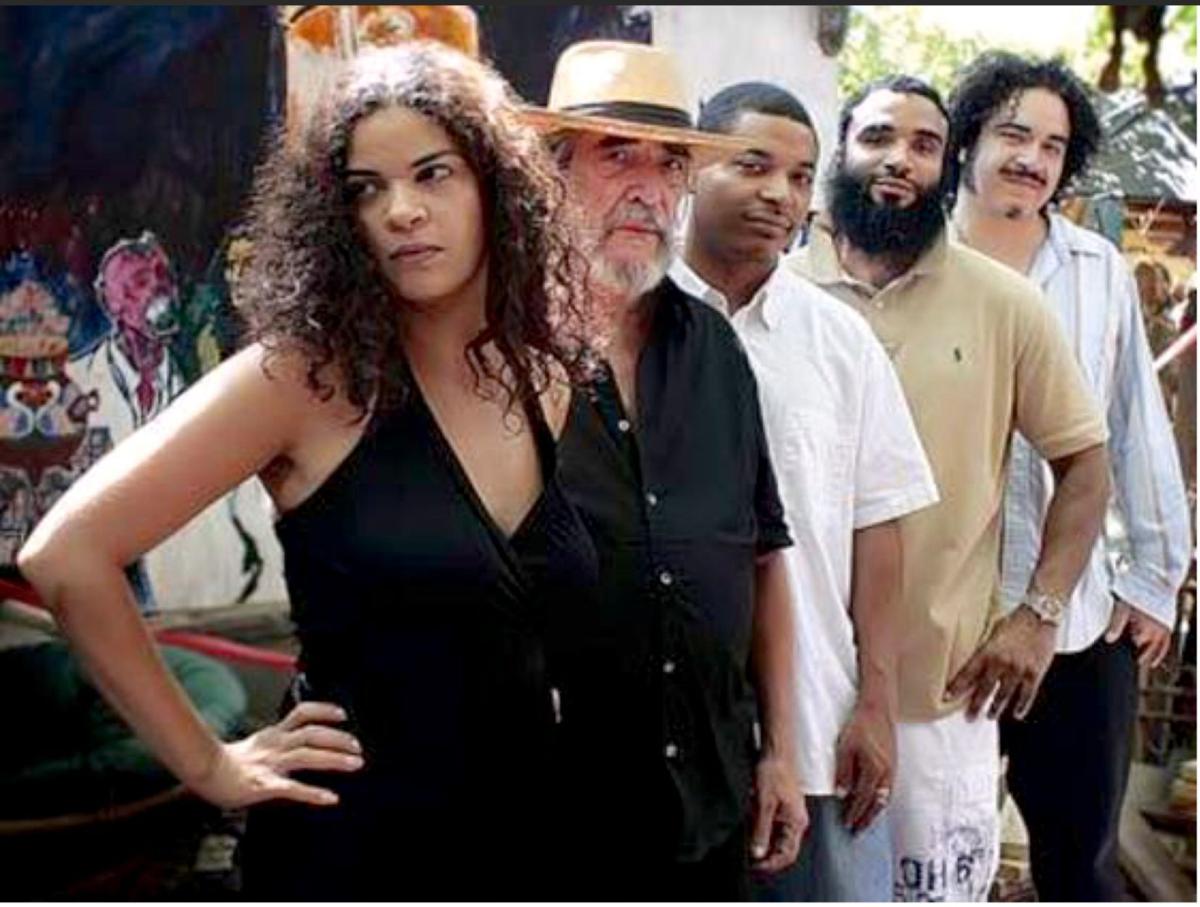 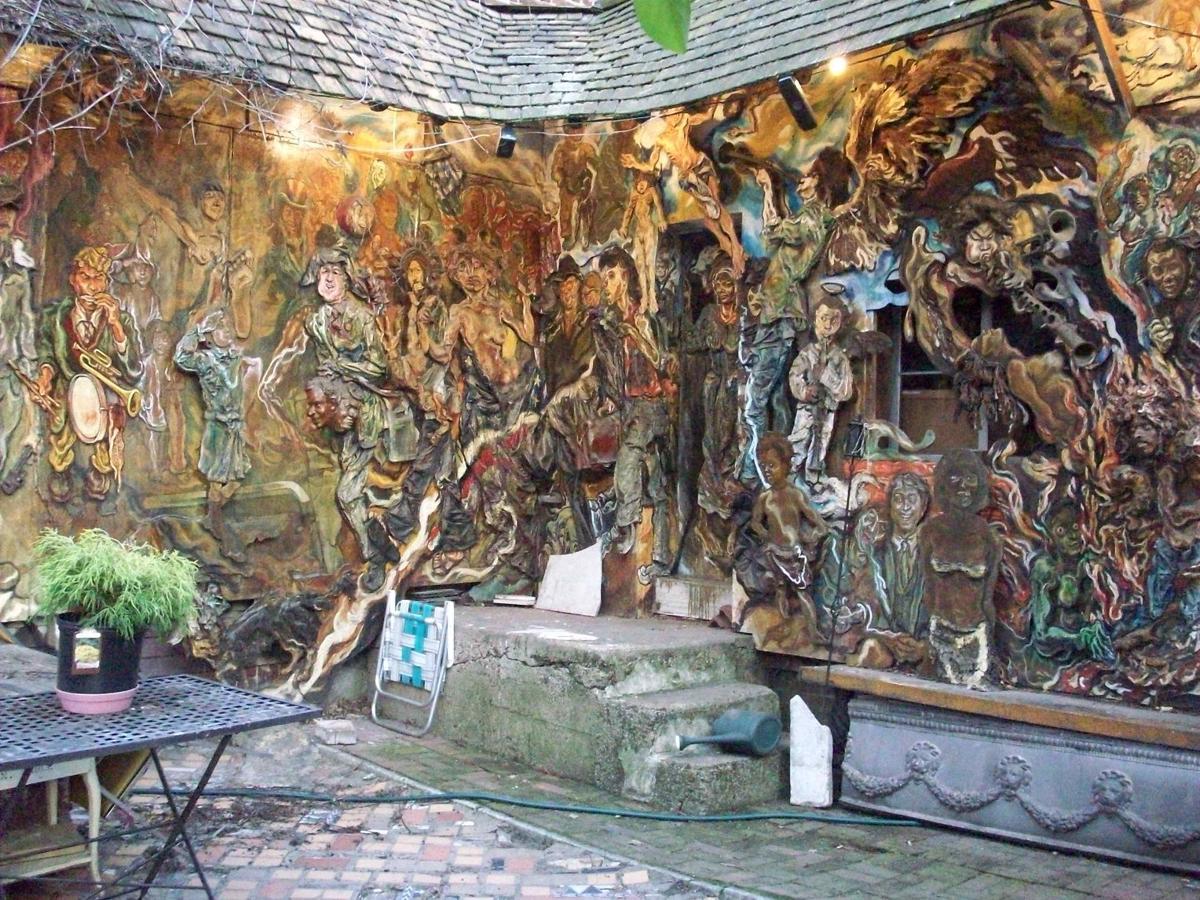 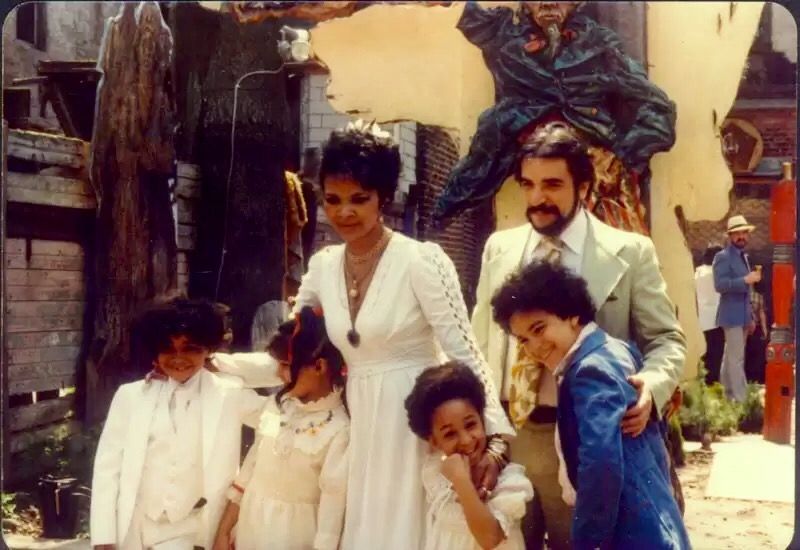 Joseph Tiberino and his wife, Ellen Powell Tiberino, the late doyenne of African-American art, were prolific artists who also parented a tight-knit family of artists. 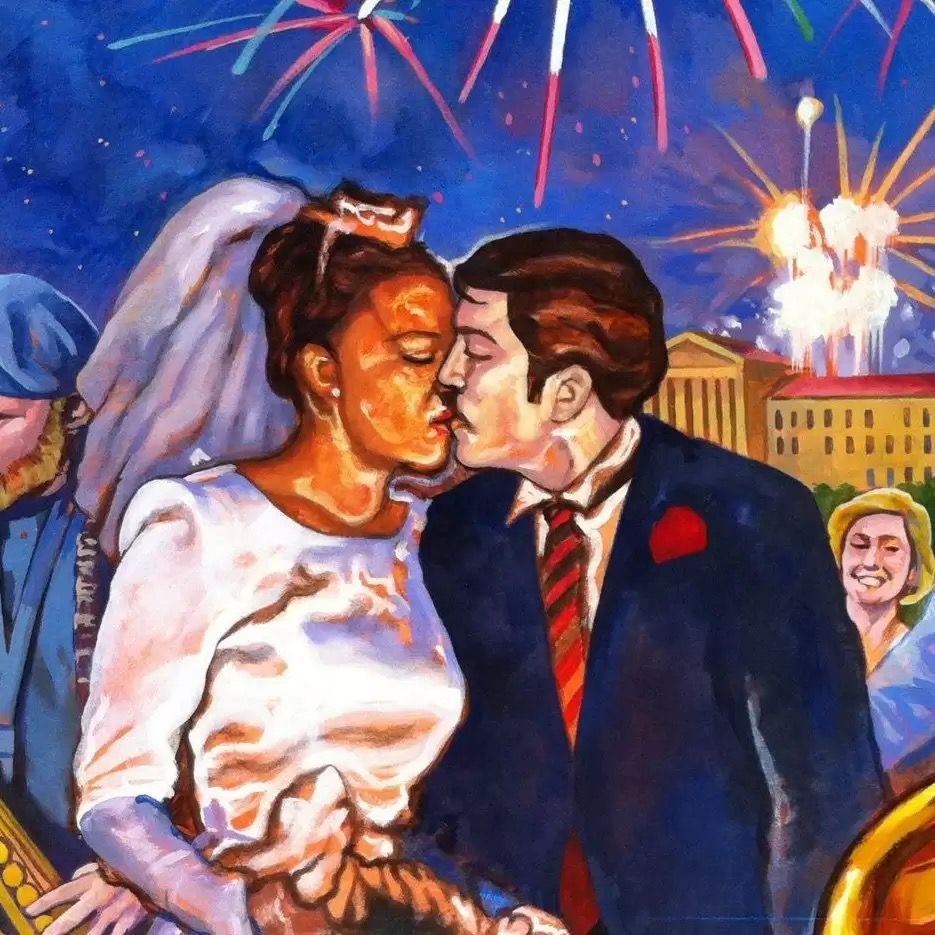 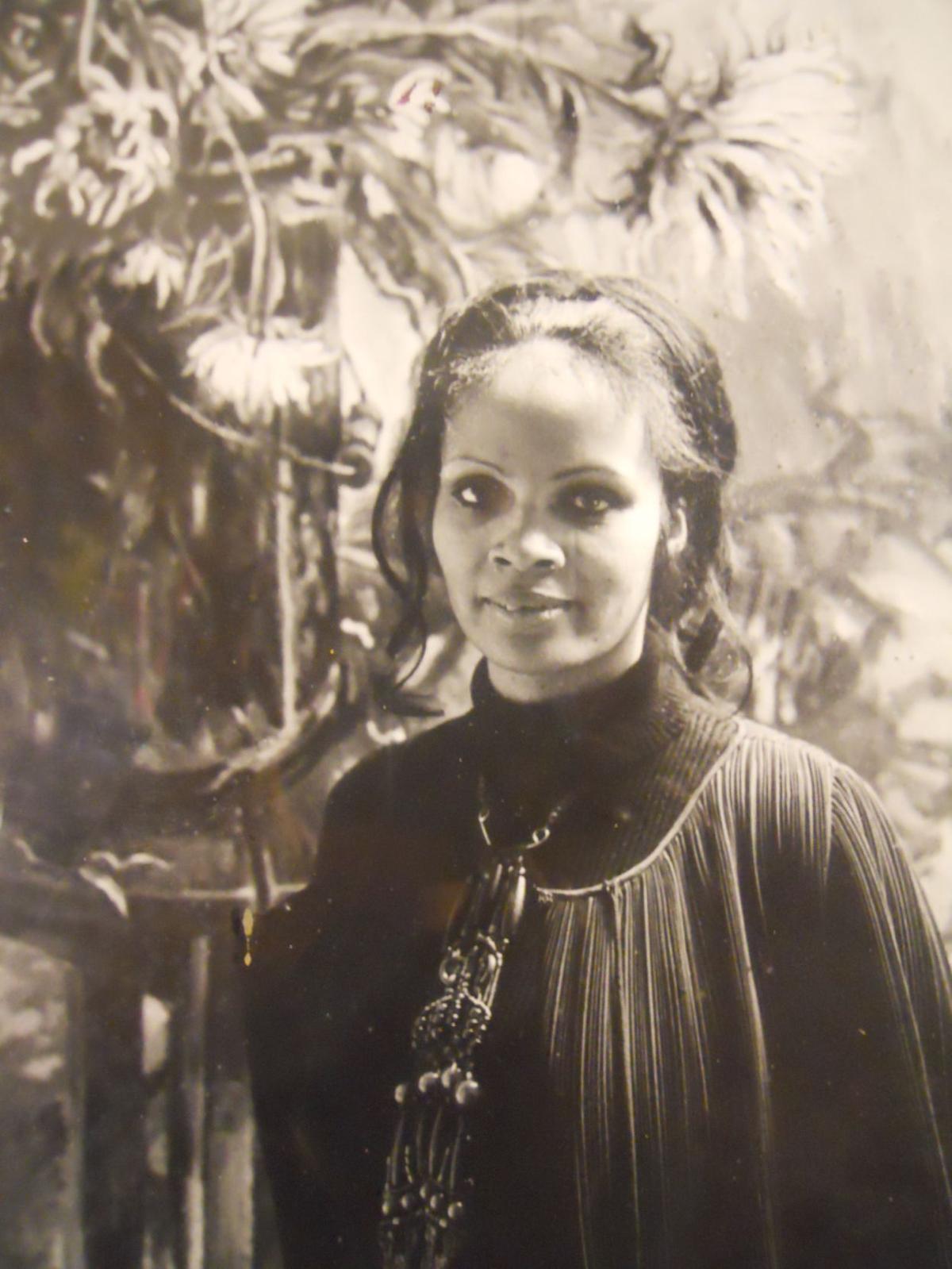 The Ellen Powell Tiberino Memorial Museum was founded in 1999, seven years after her death from cancer at 54. 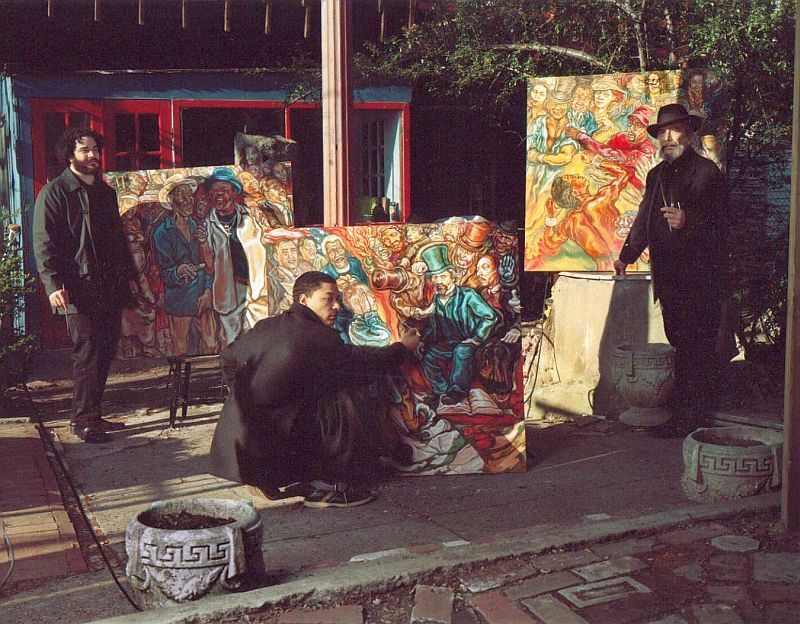 Joseph Tiberino, along with sons and fellow artists Raphael and Gabe, worked with the Mural Arts Program on several murals throughout the city, including a five-panel mural on the 15th Street side of the Municipal Services Building.

Joseph Tiberino and his wife, Ellen Powell Tiberino, the late doyenne of African-American art, were prolific artists who also parented a tight-knit family of artists.

The Ellen Powell Tiberino Memorial Museum was founded in 1999, seven years after her death from cancer at 54.

Joseph Tiberino, along with sons and fellow artists Raphael and Gabe, worked with the Mural Arts Program on several murals throughout the city, including a five-panel mural on the 15th Street side of the Municipal Services Building.

Philadelphia’s art world lost a legend last week. Joseph Tiberino, patriarch of a family known to many as “The West Philly Wyeths,” died on Friday, Feb. 19, 2016 in the sprawling Powelton compound that was home to his family, his art studio and to the Ellen Powell Tiberino Memorial Museum. He was 77.

The prolific artist was married to Ellen Powell Tiberino, the late doyenne of African-American art, and is father of painter/comics artist Raphael, EMR consultant Latif, muralist Gabe and sculptor/ceramicist Ellen. The tight-knit family of artists has maintained home studios near 38th and Hamilton streets, including the Ellen Powell Tiberino Memorial Museum, founded in 1999, seven years after its namesake’s death from cancer at 54.

The Tiberino story is a real-life love story of two artists hailing from different cultures — Joseph, Italian-American, and Ellen, African American. Otherwise, the couple had more in common than not: they grew up in the same city, shared artistic skills and were committed Catholics. In 1967, they married and continued to document their lives — and especially their growing brood — through their work. Ellen and Joseph worked in a variety of mediums: drawing, oil and watercolor painting, mixed media murals and mosaics.

“He was always an artist,” recalled eldest son, Raphael. “He didn’t just talk the talk, he walked the walk in terms of everything he did from the time he was young, after college, meeting my mother, going up to New York, winning different mural grants — he always did everything as artistically as possible, whether planning his next mural or filming a movie. He always went at it with all cylinders open.”

A graduate of the University of the Arts, Tiberino’s work has been shown in numerous exhibitions around the country, including The Philadelphia Museum of Art. “The Unflinching Eye: Works of the Tiberino Family Circle” exhibition opened in Fall 2013 at the Africa American Museum of Philadelphia (AAMP) focusing on the family’s art and artistic legacy. The retrospective also featured the work of several artists associated with the Tiberinos, including Paul Keene, Julius Bloch, Charles Searles, Walter Edmonds, Danny Simmons, Bariq Cobbs and Kathleen Spicer.

Tiberino was the proprietor of The Bacchanal, an artistic hotspot that was located at 13th and South streets from 1980-1992. During the period of the venue’s existence, patrons experienced live poetry reading, gallery style exhibitions and continuous art festivals — all while soaking up the creative energy that fueled the establishment.

“Joe Tiberino and I never had an argument in our whole association,” said fellow artist Phil Sumpter, 84, as he fondly reminisced about their 45-year friendship. “He never argued with me about what my thoughts were. Joe had a saying, and would look at you and say, ‘You know what’s really wrong with you?’ I’d say, ‘Yeah, man, what’s wrong with me?’ And he’d say, ‘Absolutely nothing.’ He would chuckle and laugh because he would disarm you in that respect. That was his joke.”

Tiberino’s tradition of forming artistic communities by integrating the creation of original artwork into a gathering space they called home, but also serves as the Ellen Powell-Tiberino Memorial Museum. In the 2015 documentary, titled “Tiberino,” the patriarch described how the family transformed their Powelton Village home into a museum that houses not only their work but also the works of more than 30 other artists.

“We are presently making a feature documentary film called ‘Tiberino,’ our family surname,” Tiberino explained in 2012. “It shows the 50-year history of a family of six visual artists: myself, my wife, Ellen Powell Tiberino, and our four children — Raphael, Leonardo, Ellen and Gabriel. We have gone through thousands of photos, reproductions of works of art, TV interviews, newspaper articles, sections of film that have been produced through the museum.”

This hidden oasis of art is, in some circles, considered the epicenter of the art community that has contributed to the cultural vibrancy of Philadelphia and inspired artists throughout the region.

“The world has lost a great man,” said photographer Nicole Hope Matthews. “I am lucky to have met him. It was the beginning of my senior year at Drexel and I was thinking, ‘What the hell am I going to do to make money?’ I met Joe [and] he introduced me to the wonders of the Ellen Powel Tiberino Memorial Museum. I realized that people always need their portraits taken and I am going to take editorial portraits. He became my subject for several shoots and he would always invite me around for gatherings and discuss inspirations. His family became my home away from home.”

Like his late wife, the senior Tiberino created art until his final days. His last public work was a portrait of Pope Francis done during the pope’s 2015 visit and displayed, naturally, on the stoop of the Ellen Powell-Tiberino Memorial Museum.

Memorial services for Joseph Tiberino will be on March 8 at 11 a.m. at St. Agatha-St James Catholic Church, 38th and Chestnut streets.

Philadelphia is a wonderful city because of families like the Tiberinos. Joe lived his life and did his thing. The murals, artwork, and passion should have a home in Philadelphia forever.