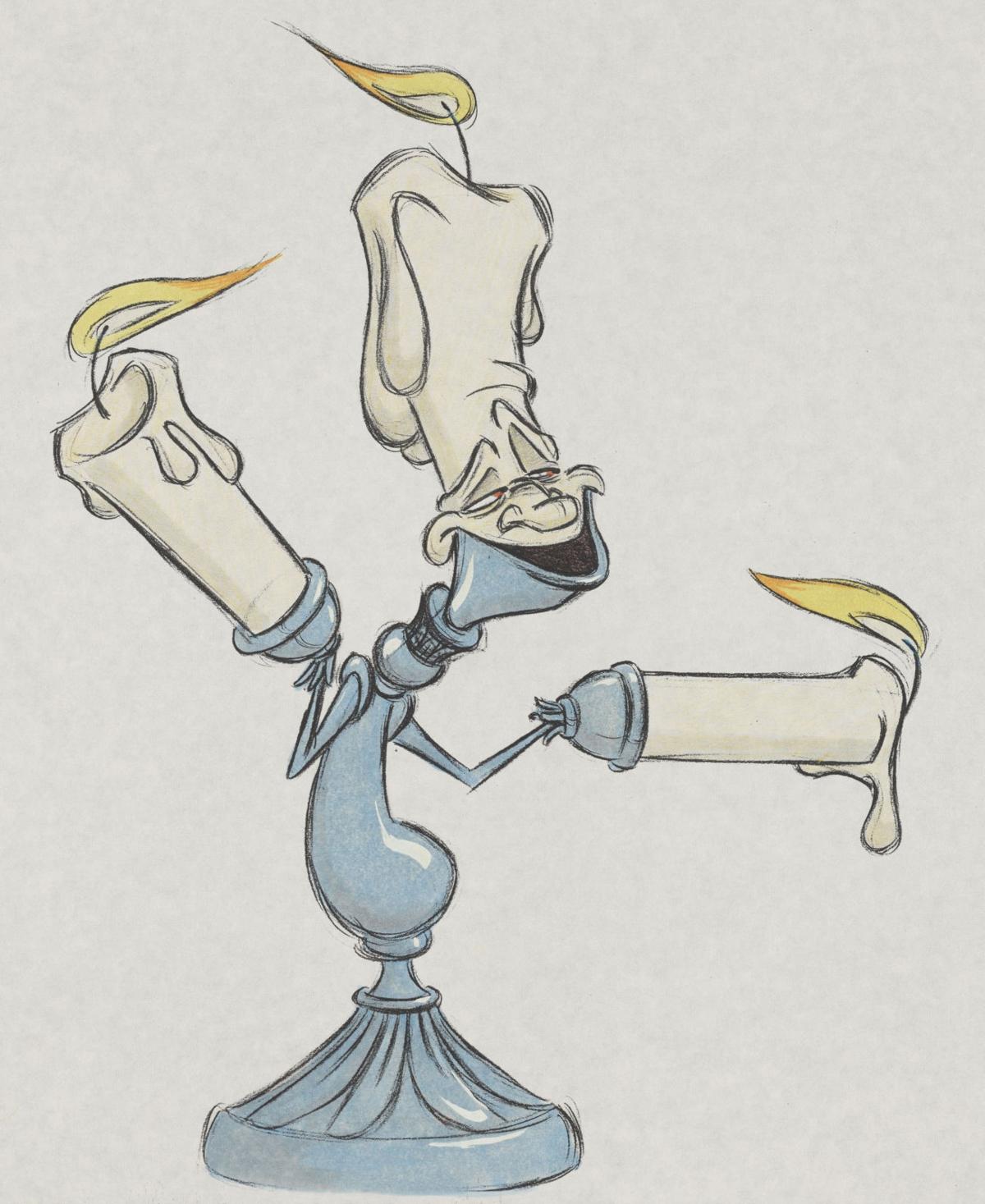 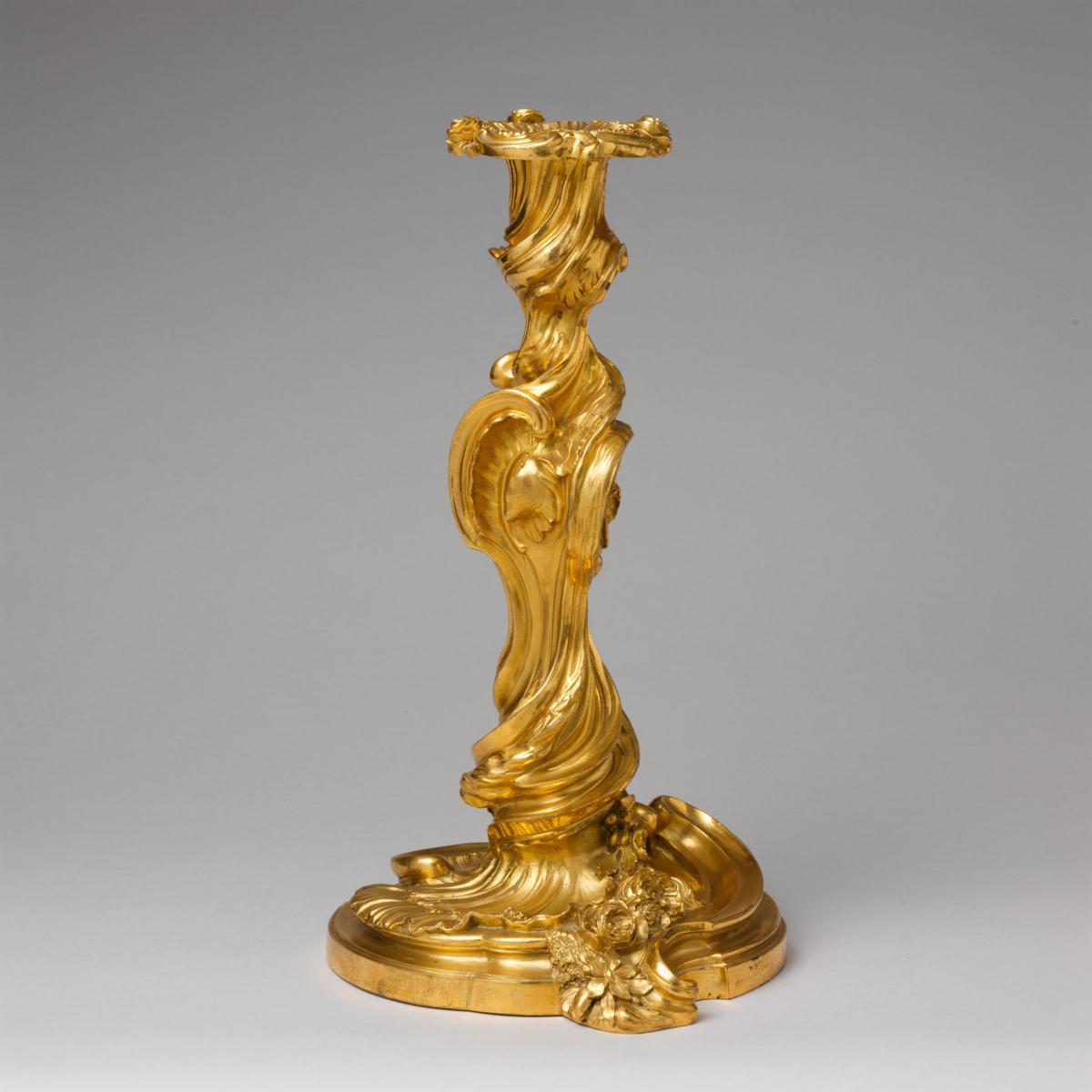 Candlesticks at the exhibit. — The Metropolitan Museum of Art, New York 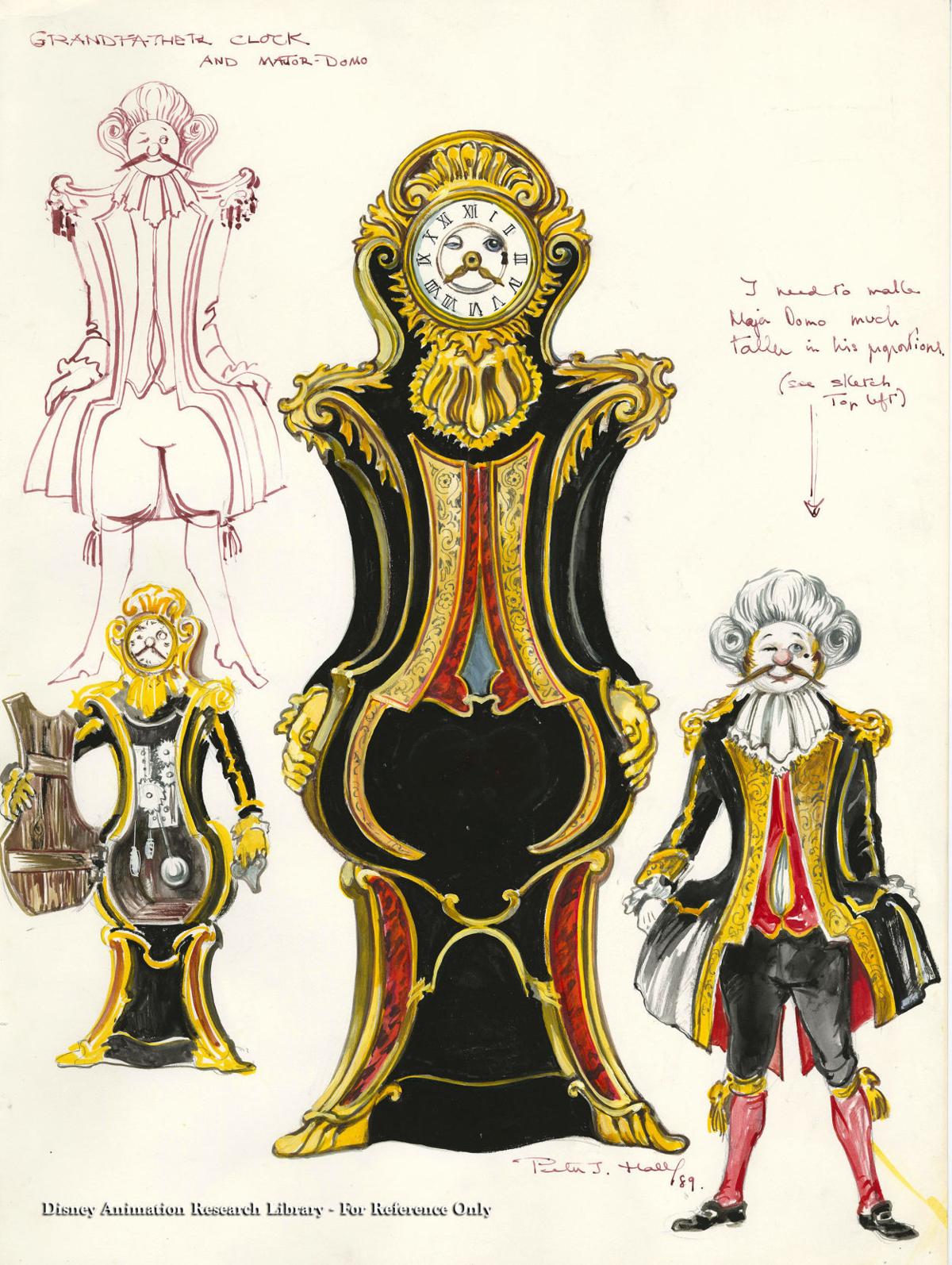 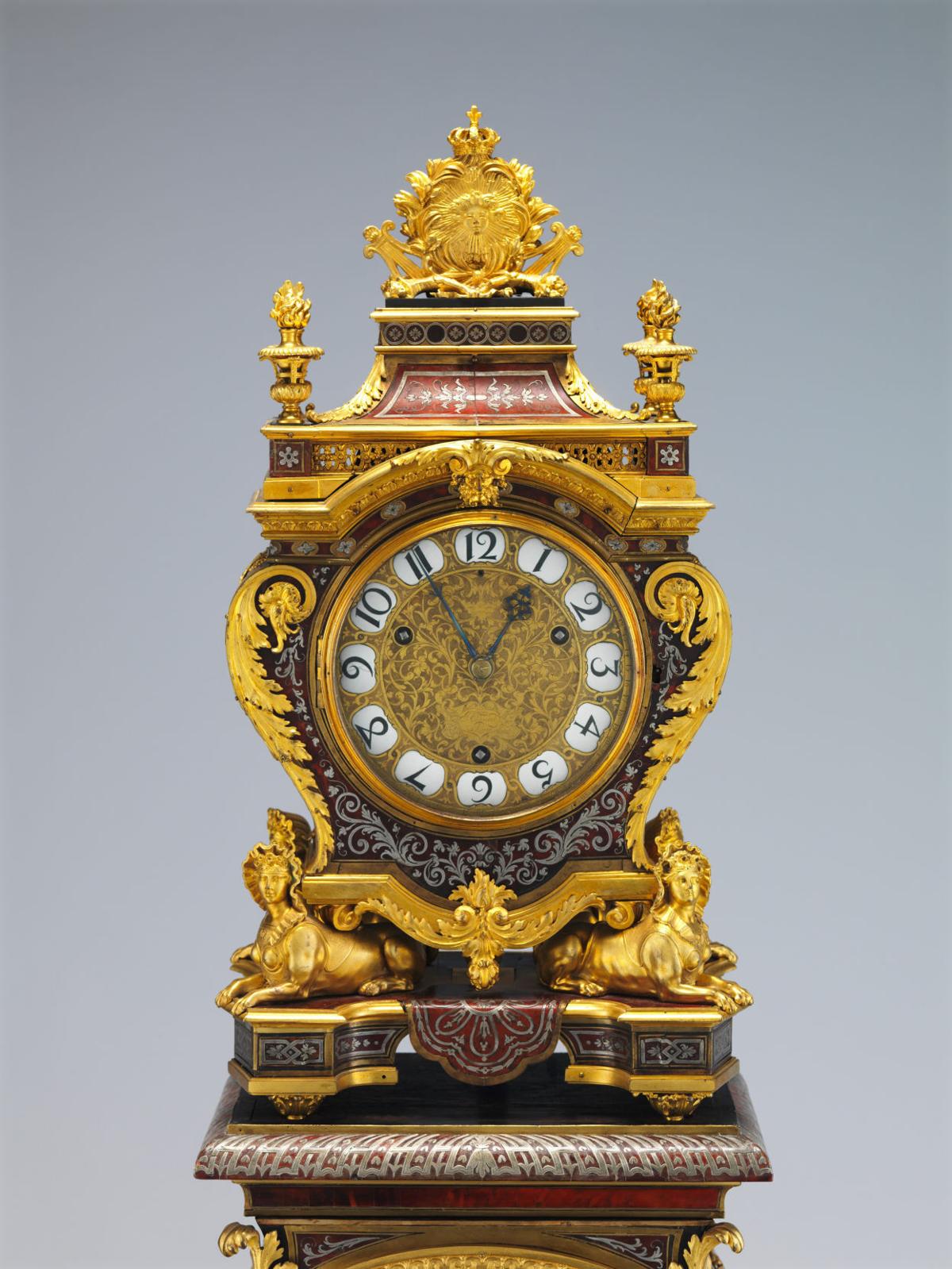 A clock on a pedestal in the exhibit. — The Metropolitan Museum of Art, New York

Candlesticks at the exhibit. — The Metropolitan Museum of Art, New York

A clock on a pedestal in the exhibit. — The Metropolitan Museum of Art, New York

NEW YORK — I have watched more Disney princess films in the past few weeks than in the entirety of my first five decades on the planet. As a citizen of American popular culture, I enjoy their grace and charm. But as a citizen of this thing called the American republic, with its roots in revolution and its rhetoric of equality, I find them often surreal. Isn’t it odd — and perhaps even wrong, in some deeper ethical sense — that Americans are addicted to these gilded fantasies of privilege?

A fascinating exhibition at the Metropolitan Museum of Art explores something that is hiding in plain sight if you watch Disney cartoons closely: the curious affinity for all things French, especially the trappings of French aristocracy.

The curators of “Inspiring Walt Disney: The Animation of French Decorative Arts” are upfront about one basic fact: Walt Disney made his movies for a very different audience than that for which the artisans of the French rococo produced their dazzling luxury objects.

Disney catered to popular taste, during a democratic era, and his films reached eager viewers around the globe. The clockmakers, figurine designers, vase painters and furniture makers of 18th-century Europe served a wealthy, often aristocratic clientele, and though their designs were widely influential, the things they made were bought and cherished by the elite.

With that caveat, this fascinating exhibition then proceeds to register the astonishing points of contact between these two very different creative worlds. At least three of the Disney company’s most popular and admired films — “Cinderella” (1950), “Sleeping Beauty” (1959) and “Beauty and the Beast” (1991) — borrow heavily from the design and architectural aesthetics of France and other European courts under the sway of Versailles’ cultural hegemony. Luxury, in films like “Cinderella,” is denoted by gold-gilded mirrors, encrusted with the vine and shell motifs that defined the rococo style. When Belle dances with the beast in the famous 1991 “Beauty and the Beast” ballroom scene, it is framed by architecture modeled largely on the Hall of Mirrors at Versailles. Early Disney cartoons featured animated porcelain figurines, complete with 18th-century dress, wigs and courtly manners.

This wasn’t accidental. Walt Disney and his animators were culturally voracious if not always culturally discriminating. They drew on an archive of design, drawings and art, collected by Walt Disney on his European travels. They often turned to French storybooks for inspiration and French paintings, especially the gauzy, pastel fantasies of the mid-18th century, known as “fetes galantes,” for visual material. Not all Disney roads lead back specifically to France, but many of them intersect either with France or with the wider French influence over European culture.

The exhibition, which includes exquisite decorative objects and drawings, film cels and renderings by Disney artisans, raises essential questions about any artistic age or period. What were they thinking? What were they trying to do? Why did these things matter to them? Curated by the Met’s Wolf Burchard, the galleries feature juxtapositions so striking, so unlikely, so weird, that both the age of Disney and the age of Versailles seem newly unfamiliar and even surreal.

Isn’t it strange that Disney artists, working on mass entertainment in the middle of the 20th century, appropriated ideas and images from one of the most refined and hierarchical cultures in human history? Isn’t it odd that Americans, who reflexively celebrate humble origins, log cabins and rustic simplicity, embraced Disney’s dancing candelabras and riffs on porcelain by Meissen and Sèvres? Does any of this raise questions about the authenticity of our so-called small-d democratic impulses?

Those questions remain with us today. A certain ex-president, for example, managed to gather a wide working-class cult following while holding court in a faux-Versailles in the sky, his Trump Tower apartment complete with marble (or fake marble) columns, topped with gilded Corinthian capitals, below gaudy ceiling frescos and an excrescence of ornamental molding.

The simplest explanation is that France is coded “fancy” in the American vernacular. But the exhibition suggests there is more than just a reflexive nod to French fashion when images of wealth or power are summoned. The rococo style, Burchard argues, wasn’t just luxe: “It is its dynamic asymmetry, freedom of association, its overwhelming sense of movement, irony and joy that distinguish it from other styles.” The freedoms of association, irony and joy, in particular, were liberating for Disney animators, especially early in the company’s history when it was more experimental, and its output (including the magnificent Merry Melodies cartoons) more vibrantly phantasmagorical than the later, more mass-market product.

So, we get a sense of parallel worlds, both seeking escapism in things like anthropomorphic furniture and the animation of inanimate objects. An infamous libertine novel that circulated in Paris in the 1740s featured a man transformed into a series of sofas, doomed to witness the louche morals of various couples until at least one expressed true love. The novel, “Le Sopha,” was not likely known to the Disney animators, but the idea of human souls inhabiting chairs, teapots or candlesticks suggests a parallel interest in the animation of the appurtenances of daily life.

Zoomorphism, the transformation of one animal species to another, was another parallel obsession. In France, during the enlightenment, it was a trope for considering basic questions of what makes humans human. In Disney, and other forms of American popular culture, it serves various purposes, masking discourse about class identity or the surface vs. depth of human character.

The exhibition also covers the fascinating corporate history of Disney and its cultural and sociological impact. When a film cel from “Snow White” was acquired by the Met in 1938, Disney was seen as a pioneer, an innovator, even a modernist. His work felt experimental and boundary challenging, and in 1942, one established critic even compared him to Leonardo. Sergei Eisenstein, the Soviet film pioneer, claimed Disney’s cartoons captured “the structure of primitive thought,” which was meant as high praise.

The exhibition ends with the coalescing plans for a theme park called Disneyland, centered on a fantasy castle indebted to neo-Gothic European palaces and castles, and the chateau architecture of the Loire Valley. On view is a 1955 architectural rendering of the Sleeping Beauty Castle, which includes the hand-lettered instruction next to the tallest, turreted tower: “This tower to be prefabricated in sections ...” Like old porcelain, there is something fragile about everything Disney does: The artifice can shatter so easily.

The larger question that gathers force through the exhibition is whether these parallel worlds reflect shared values or common political ideologies. Is there something about France in its last, decadent age before the revolution that was similar to the America of the 1950s? Is decadence the common thread? A predilection to silliness and superficiality?

That avenue feels like a dead end. French culture wasn’t silly, or superficial, and though the paintings of Fragonard and the harpsichord works of Rameau may seem too precious to some audiences, there is substance and depth in both. And it isn’t necessary to impute sophisticated depth to the works of Disney. They are very good at appealing to the vast, shared and profound shallowness common to us all, which is no minor accomplishment.

If there is common cultural ground in the two epochs explored here, it likely has to do with the complicated thing we call modernism. France was dealing with the intellectual and political stresses of the Enlightenment; America had just emerged as a world power in the age of the atomic bomb, total war, and the ideological contest between capitalism and communism. The complicated embrace and rejection of these ideas, the dual face of modernism, was articulated in an idea by Max Weber called disenchantment. As the mysteries of the world, once monopolized and franchised by religion, yield to science and rational thought, the world is a little less enchanted. Things move forward, knowledge advances and barbarism joins the resistance.

Rococo architecture was in part a form of resistance to orderly ideas of structure and design, and it often flourished in Catholic regions, such as Bavaria, where the Catholic Church wanted to reassert its ancient power. It undermined the logic of architecture, in ways that were delightful, and retardataire. Disney, who would end up testifying to the House Un-American Activities Committee, whose films enshrined rigid gender norms, racist stereotypes and anti-democratic fantasies of class and hierarchy, offered audiences an escape from two things they found terrifying: the present and the future.

No one is immune from escapism; few of us can live without at least a little of it. We escape to fantasies of the past because the past is gone. It can be dressed up, reimagined, distorted and cast in the glow of nostalgia, but it can’t be relived. When Disney aimed his work not just at children but at the child in all of us, he was essentially giving us permission to set aside democracy and modernism and all the messiness of both, at least for a while. It’s just play, play is just imagination, and what’s wrong with that?

Spend a little time with the work, however, and you realize it’s not always innocent play. Sometimes play can turn into a dream and the dream turns ugly, and suddenly people are doing terrible things in pursuit of a past that never existed. Waking up from that is a nightmare.

“Inspiring Walt Disney: The Animation of French Decorative Arts” is on view at the Metropolitan Museum of Art, 1000 Fifth Ave., New York, through March 6. metmuseum.org.