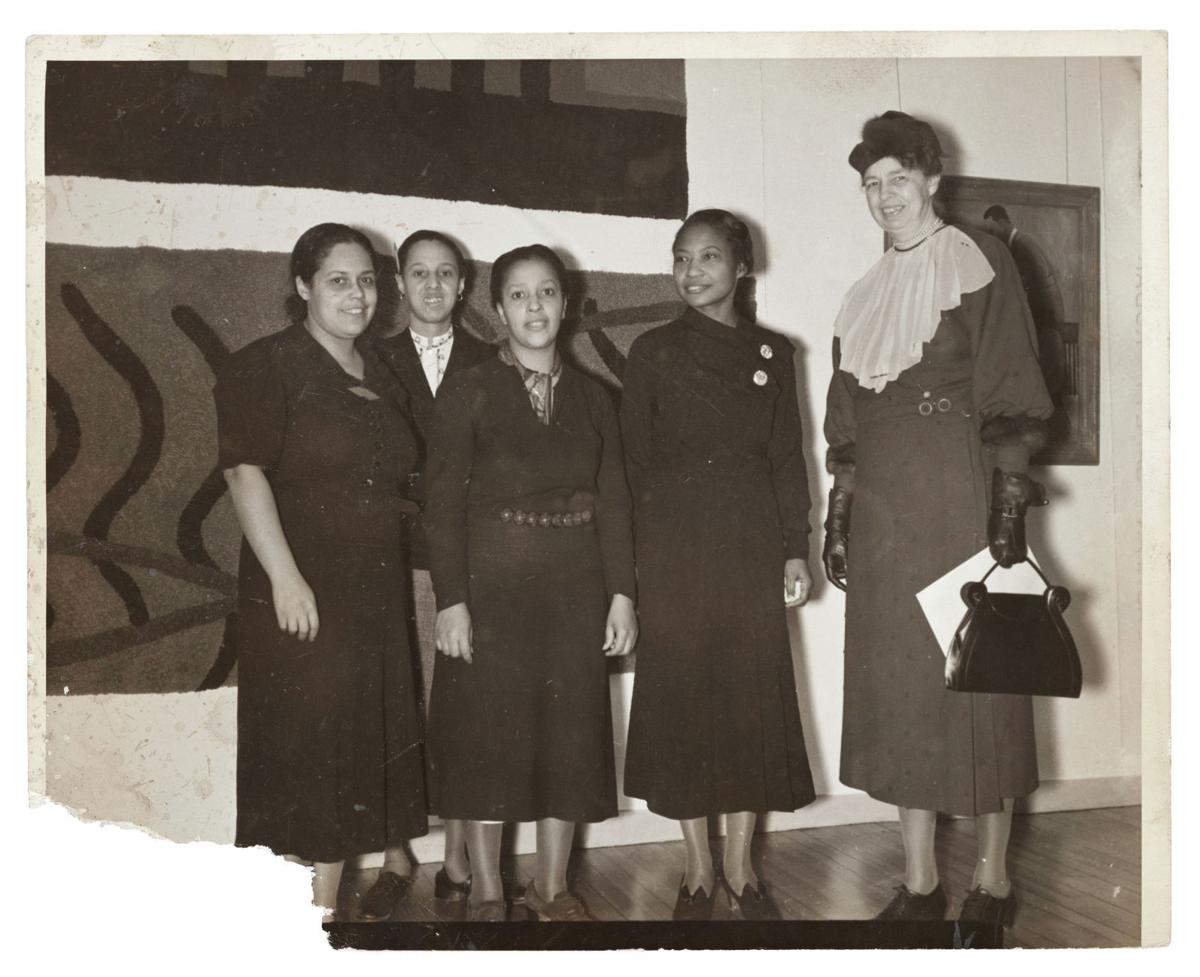 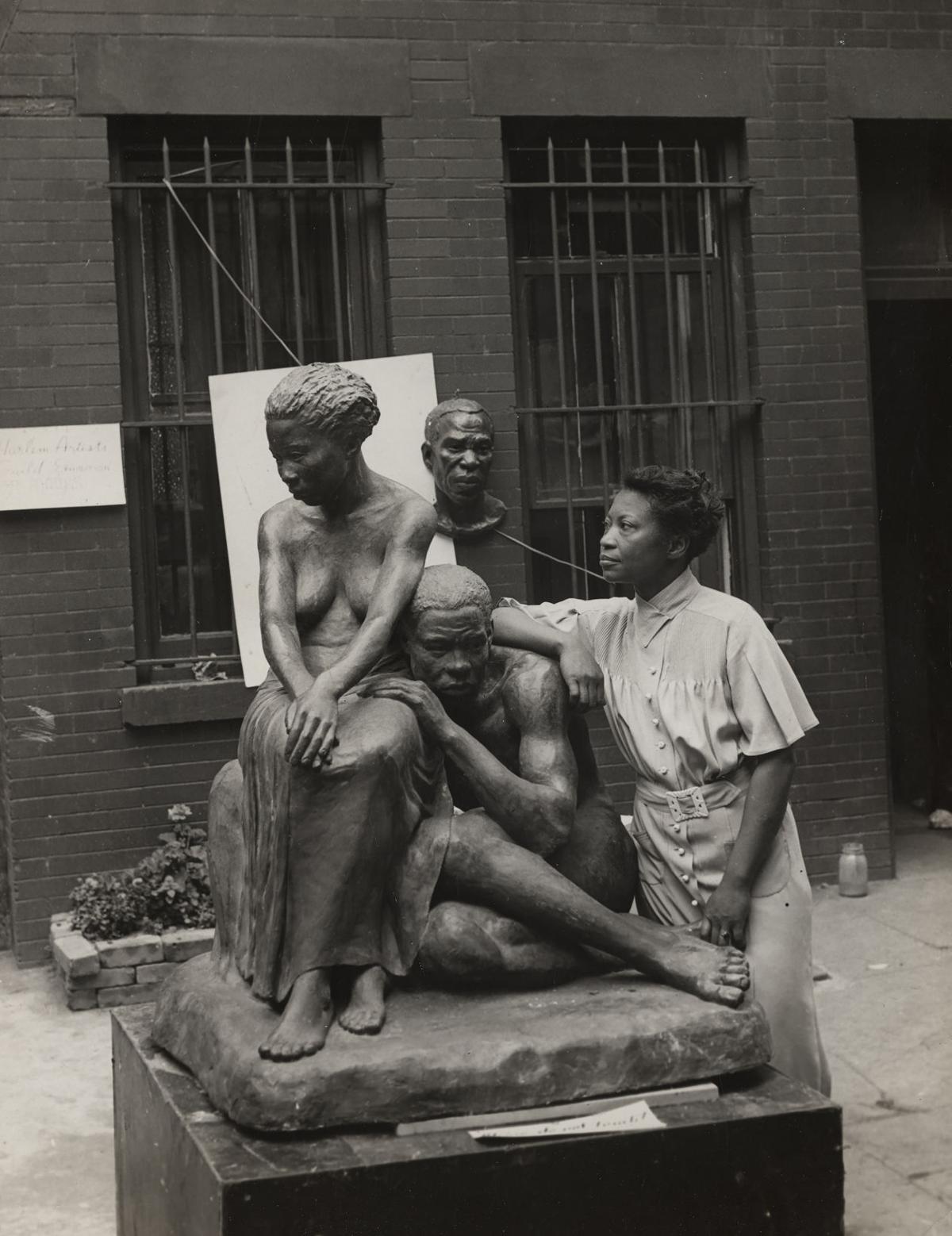 In 1937, sculptor Augusta Savage was commissioned to create a sculpture that would appear at the 1939 New York World’s Fair in Queens, New York. Savage was one of only four women, and the only Black artist, to receive a commission for the fair. In her studio in Harlem, she created “Lift Every Voice and Sing,” a 16-foot sculpture cast in plaster and inspired by the song of the same name — often called the Black national anthem — written by her friend, James Weldon Johnson, who had died in 1938.

The sculpture was renamed “The Harp” by World’s Fair organizers and exhibited alongside work by renowned artists from around the world, including Willem de Kooning and Salvador Dalí. Press reports detail how well the piece was received by visitors, and it’s been speculated that it was among the most photographed sculptures at the Fair.

But when the World’s Fair ended, Savage could not afford to cast “The Harp” in bronze, or even pay for the plaster version to be shipped or stored, so her monumental work, like many temporary works on display at the Fair, was destroyed.

The story of the commission and destruction of “The Harp” and its eventual fate is a microcosm of the challenges Savage faced — and the ones Black artists dealt with at the time and are still dealing with today. Savage was an important artist held back not by talent but by financial limitations and sociocultural barriers. Most of Savage’s work has been lost or destroyed but today, a century after she arrived in New York City at the height of the Harlem Renaissance, her work, and her plight, still resonate.

“Imagine the power of somebody looking at ‘The Harp’ in its sort of monumental size for the last 70 years,” Niama Safia Sandy, a curator and visiting assistant professor at Pratt Institute, said. “What could that have changed?”

‘Disagreeable complications’Savage, born Augusta Christine Fells in Green Cove Springs, Florida, in 1892, was the seventh of 14 children. She started making animal sculptures from clay as a child, but her father strongly opposed her interest in art. Savage once said that he “almost whipped all the art out of me,” according to the Smithsonian American Art Museum.

Savage arrived in Harlem a century ago in 1921 in the early years of the Harlem Renaissance. She was nearly 30; had already been twice married, widowed and divorced; and had a teenage child, Irene, whom she left in the care of her parents in Florida. She applied and was accepted to the Cooper Union art school, and completed the four-year program in three years. She took the surname Savage from her second husband, whom she divorced. In 1923, she married Robert L. Poston, her third and final husband. Poston died a year later.

The year she married Poston, Savage was one of 100 women awarded a scholarship to attend the Fontainebleau School of Fine Arts in Paris. But when the admissions committee realized that it had selected a Black woman, Savage’s scholarship was rescinded.

In a letter explaining the decision, the chairman of Fontainebleau’s sculpture department, Ernest Peixotto, expressed concern that “disagreeable complications” would arise between Savage and the students “from the Southern states.”

Savage did not accept the rejection quietly. “She used the Black press to make the limits that she was facing known to the larger national and international public,” Bridget R. Cooks, an art historian and associate professor at University of California, Irvine, said. “She had a real determination and sense of her own talent and a refusal to be denied.”

In the years after the Fontainebleau episode, Savage was commissioned to create busts for prominent African American figures such as sociologist and scholar W.E.B. Du Bois and Jamaican activist Marcus Garvey. She also created “Gamin,” a painted plaster bust portrait based on her nephew that became one of her most well-known pieces, praised for its expressiveness. (It was later cast in bronze.)

“Gamin” earned her a Julius Rosenwald fellowship in 1929 to travel to Paris, which had become a refuge for Black artists, including painter Palmer Hayden and sculptor Nancy Elizabeth Prophet. Savage studied at the Académie de la Grand Chaumière and had works displayed at the Grand Palais and other prominent venues.

When she returned to Harlem in 1932, she opened the Savage Studio of Arts and Crafts, where she taught prominent artists such as Jacob Lawrence, Gwendolyn Knight, Norman Lewis and Kenneth B. Clark. Clark later turned to social psychology and developed, with his wife Mamie, experiments using dolls to show how segregation affected Black children’s self-perception.

The community-driven education that Savage championed is part of the African American tradition, Cooks said, because Black people have historically been excluded from formal academic spaces. “But for her to open her own school is something entirely different,” Cooks added. “That is becoming a business person. That’s taking on a leadership role for which she doesn’t have any models in terms of Black people in the art world and Black women in particular. ”

In 1934, Savage became the first African American member of the National Association of Women Painters and Sculptors (now the National Association of Women Artists). In 1937, she worked with the WPA Federal Art Project to establish the Harlem Community Art Center and became its first director. Eleanor Roosevelt, who attended its inauguration, was so impressed with the center that she used it as a model for other arts centers across the country.

“She created a pathway for careers for Black artists,” Tammi Lawson, the curator of the art and artifacts division of the Schomburg Center, which has the largest holding of Savage’s work, said. “She taught them, she gave them the tools, and she got them work.”

“Joe Gould’s Teeth,” a 2016 book by historian Jill Lepore, revealed archival evidence that Gould, an eccentric writer, had harassed Savage by calling her incessantly, insulting her, following her to parties and telling people she had agreed to marry him. In the early 1940s, Savage abruptly left her home in Harlem for a farmhouse in Saugerties, New York, in the Catskill Mountains, where she continued to make busts and teach local children. In Harlem, the community art center she had founded was closed in 1942 when federal funds were cut during World War II.

Savage only returned to Harlem after Gould died in 1954. She died in relative obscurity in March 1962 of cancer, at 70.

‘A blueprint for what it means to be an artist that centers on humanity’Jeffreen Hayes, who is now a curator and the executive director of Threewalls, an arts nonprofit in Chicago, was a graduate student at Howard University when she learned about Augusta Savage’s work. A professor mentioned the sculptor in passing during a section on the Harlem Renaissance.

“I remember my professor showing slides of Augusta Savage,” Hayes said, “and then we just kind of moved on.”

Hayes, though, was struck by this story of a resilient Black woman whose greatest works have been lost but who made a life as an artist, teacher, arts center director and community organizer against the backdrop of Jim Crow laws and the Great Depression.

“I don’t think about Augusta Savage as someone who only made objects,” Hayes said, but rather as someone who “has really left behind a blueprint of what it means to be an artist that centers humanity.”

At a moment when discourse has centered on the artistic and political role of public art and monuments, the continuing absence of a work like “The Harp” becomes even more acute.

After the Civil War, as cities evolved in the 19th and 20th centuries, sculptors formed close alliances with architects, such that parks, town squares and other public spaces were designed with sculptures in mind. Unlike paintings, which are typically housed in museums, sculptures and monuments hold an outsized symbolic value because of their presence in public life.

“Your public art should align with a community’s values,” James Grossman, the executive director of the American Historical Association, said. “Every generation, each state should step back and say, maybe it’s time for somebody else” to be honored.

In assessing “Augusta Savage: Renaissance Woman,” the Times art critic Roberta Smith noted of another Savage sculpture titled “Realization”: “It never made it beyond its forcefully modeled nearly life-size clay version. It’s heartbreaking to think the difference its survival might have made.”

Recently, in the context of questions over Confederate monuments, there have been calls to recreate Savage’s “The Harp” and display it at the National Museum of African American History and Culture in Washington.

In her work at Threewalls, Hayes said she aims to honor Savage’s mission: to “build a larger ecology that intentionally builds a relationship with community,” as Hayes put it.

Hayes didn’t have the support of people like Savage to guide her in the art world early on. “I feel really good that I can pass on that wisdom to the next generation coming up,” she said.