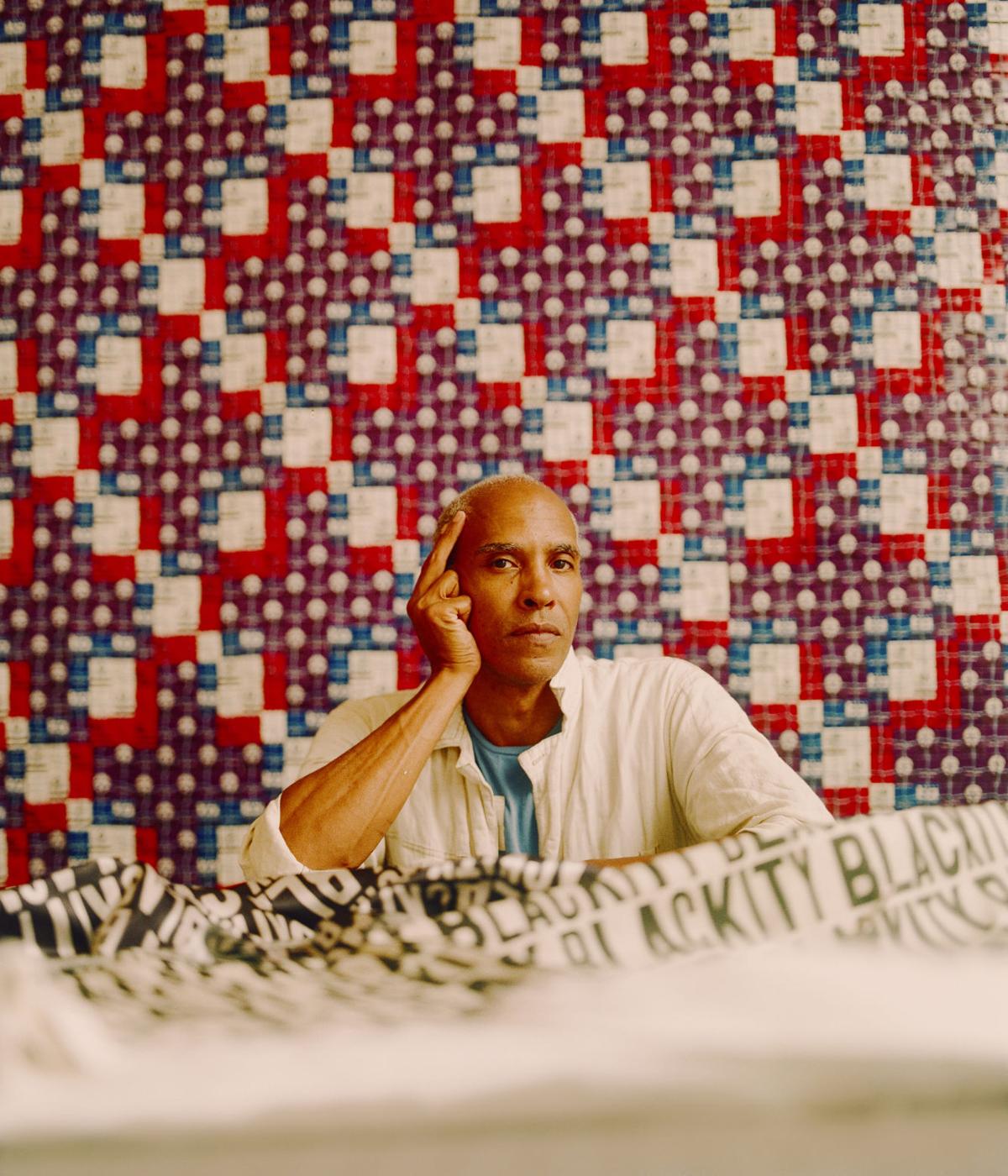 The designer Ron Norsworthy at his home and studio in Roxbury, Conn., with one of the matchbook “quilts” memorializing Black people killed by law enforcement and “Blackity” wallpaper, Aug. 24, 2021. Norsworthy explores his own experiences of marginalization in his textiles, installations and quilts. — Kendall Bessent/The New York Times 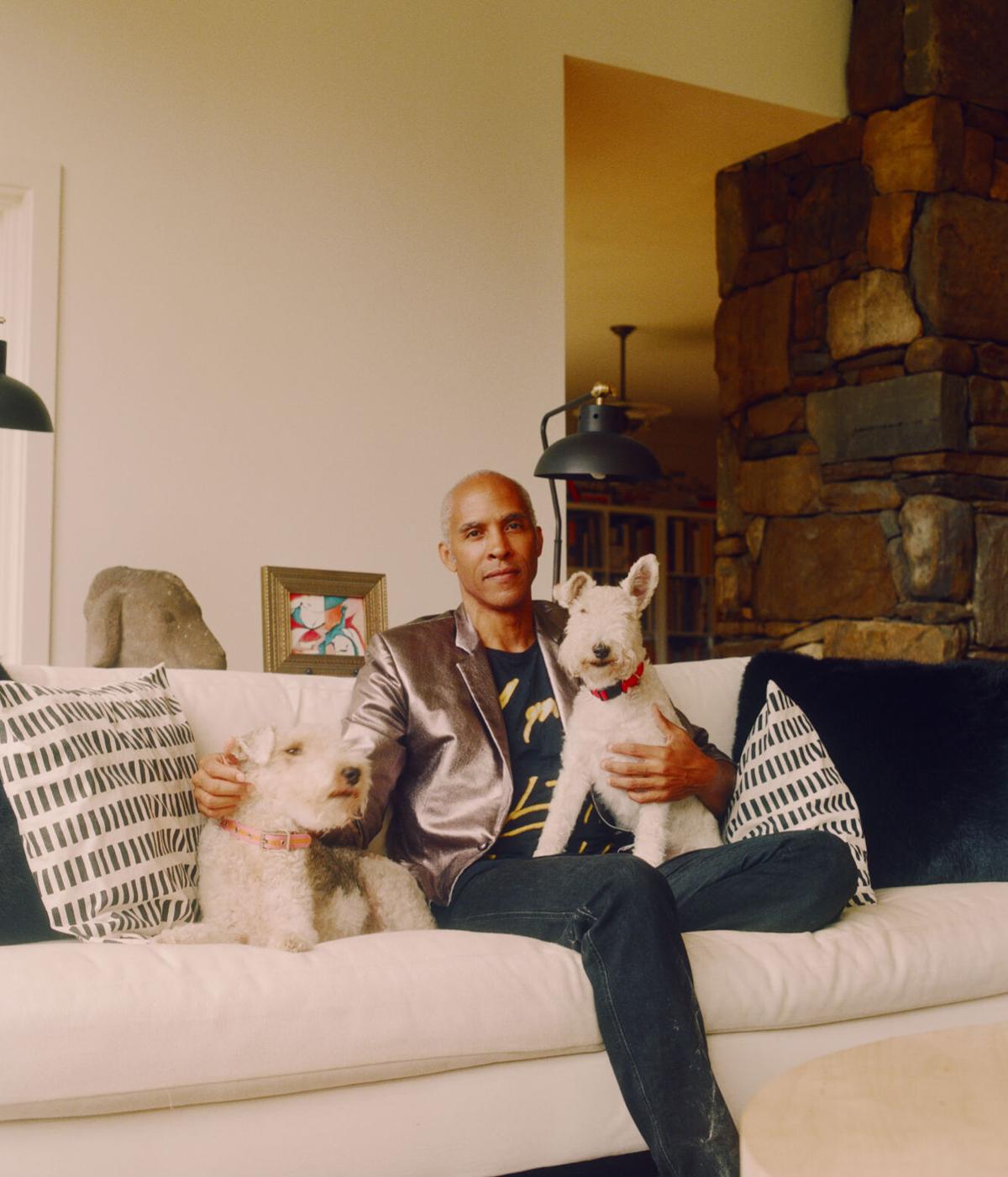 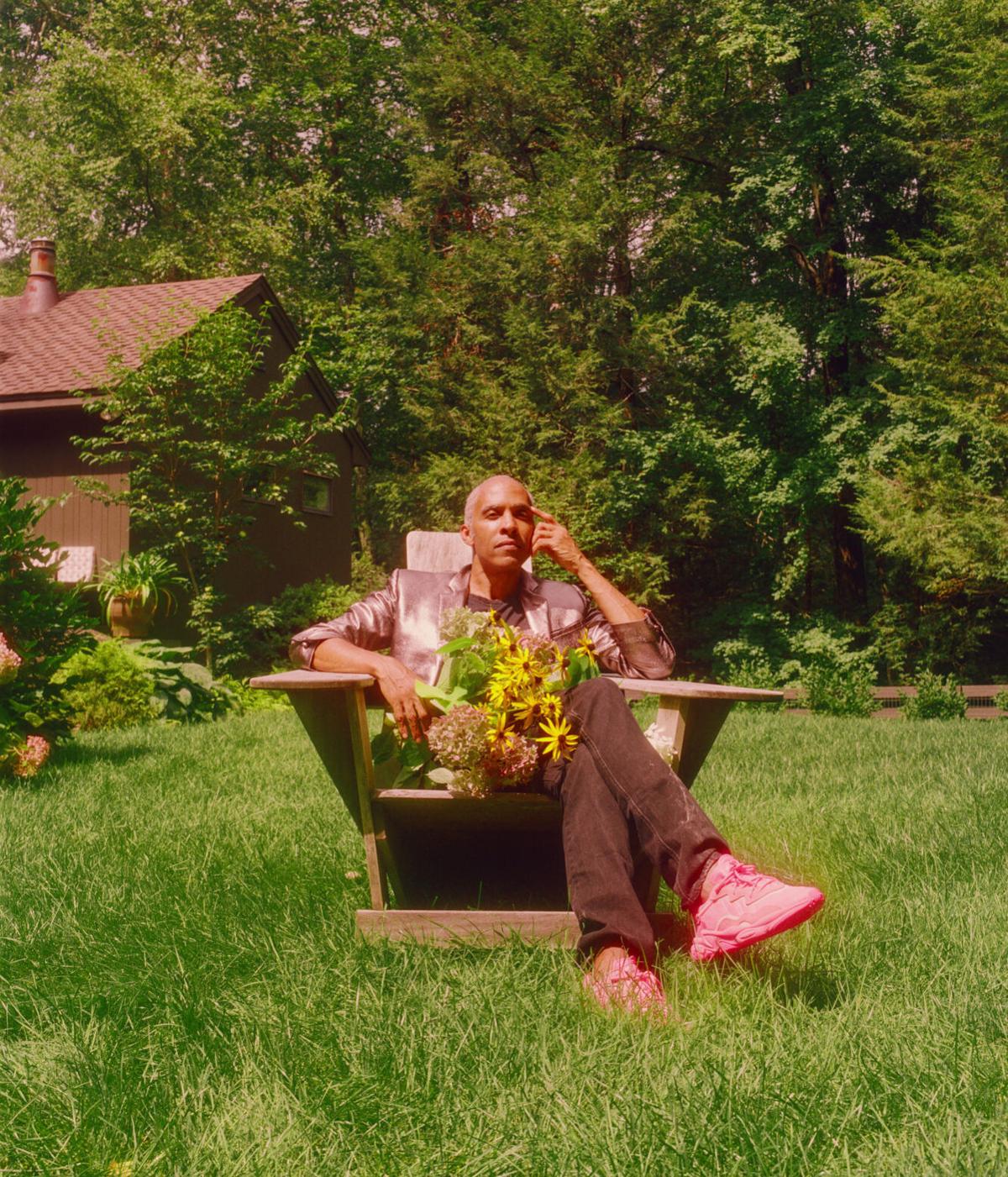 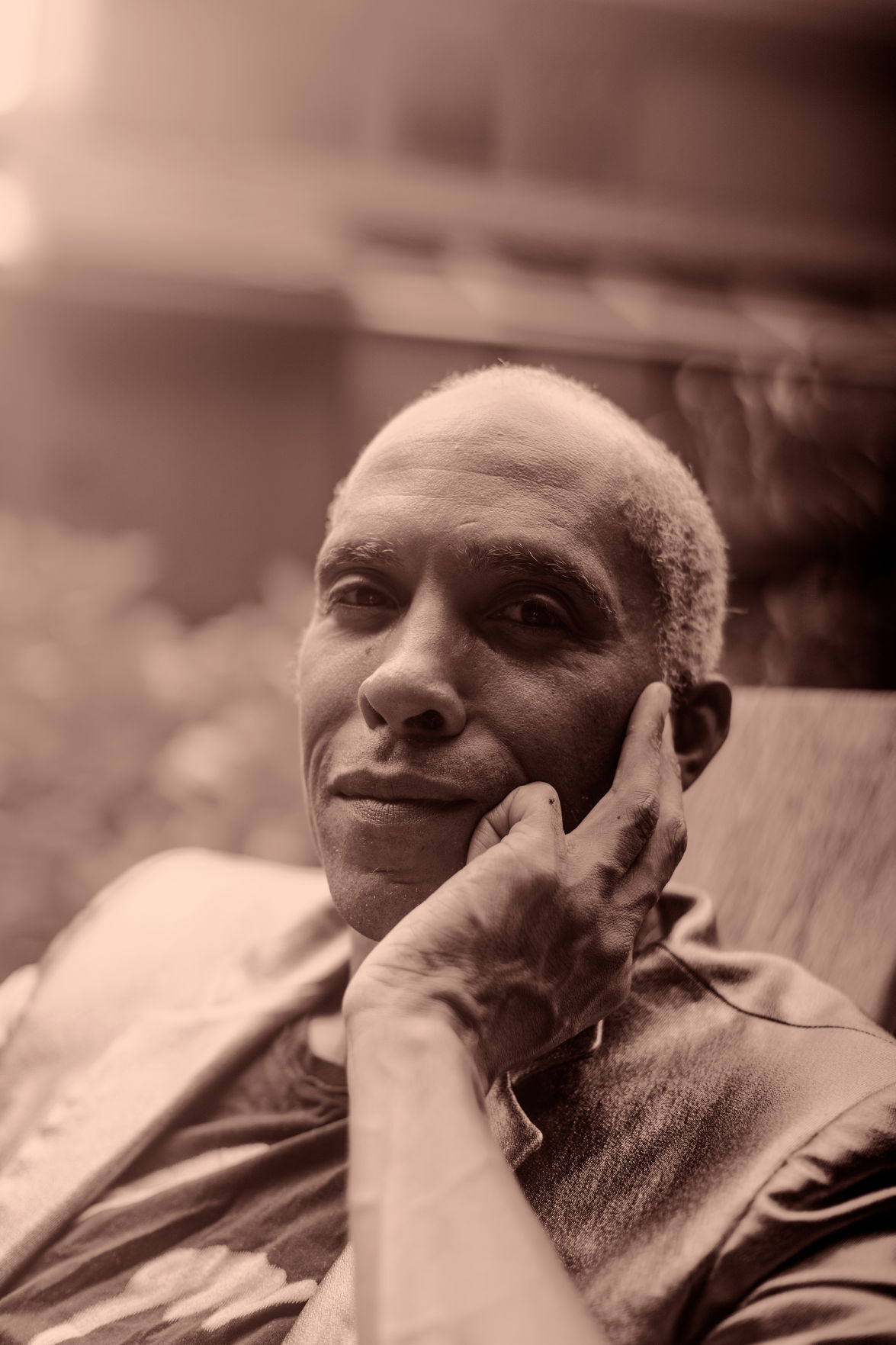 -- PHOTO MOVED IN ADVANCE AND NOT FOR USE - ONLINE OR IN PRINT - BEFORE OCT. 3, 2021. -- The designer Ron Norsworthy at his home and studio in Roxbury, Conn., Aug. 24, 2021. Norsworthy explores his own experiences of marginalization in his textiles, installations and quilts. (Kendall Bessent/The New York Times)

The designer Ron Norsworthy at his home and studio in Roxbury, Conn., with one of the matchbook “quilts” memorializing Black people killed by law enforcement and “Blackity” wallpaper, Aug. 24, 2021. Norsworthy explores his own experiences of marginalization in his textiles, installations and quilts. — Kendall Bessent/The New York Times

-- PHOTO MOVED IN ADVANCE AND NOT FOR USE - ONLINE OR IN PRINT - BEFORE OCT. 3, 2021. -- The designer Ron Norsworthy at his home and studio in Roxbury, Conn., Aug. 24, 2021. Norsworthy explores his own experiences of marginalization in his textiles, installations and quilts. (Kendall Bessent/The New York Times)

ROXBURY, Conn. — Ron Norsworthy, a visual artist and designer, could slot easily into popular culture’s ideal of the hero: He is a man of relentless self-invention. He studied architecture at Princeton, worked for a year as a designer with Michael Graves, and, after being laid off, remodeled himself into an art director and production designer for widely recognized hip-hop groups in the 1990s (among them Missy Elliott, Busta Rhymes and Salt-N-Pepa).

While at first the art direction work was exciting, Norsworthy said, “I realized in the late ’90s that the hip-hop music video world was one [where] I found myself marginalized.”

In the early 2000s, he created his own multidisciplinary design firm, The Norsworthy Fund, and in 2011, with his self-developed NHOME brand, became one of the first African American men to sell his own line on QVC. Within the past two decades, he has recognized himself, at his core, as an artist.

Through his exploration, Norsworthy told me in an interview at his home, that he has come to understand that what he is primarily seeking with his work is “identity-centered place making.” In essence, he’s creating artworks and installations in which the disparate parts of his identity harmoniously coexist. It’s crucial to Norsworthy that all of him is welcomed, not just the parts that are apparent and presumed — being a Black, queer man — but also the parts that are subdued and fugitive.

Borrowing the language and props of the familiar discipline of architecture, he constructed a piece that was part-performance, part-installation, called “Reparation Tower, Harlem,” which was selected for the architecture exhibition “Harlemworld: Metropolis as Metaphor” at the Studio Museum.

More recently, Norsworthy had two solo shows of his artwork run concurrently at Long Gallery Harlem and Project for Empty Space in Newark, New Jersey. The pieces in the Long Gallery exhibition “Interior Dialogue” were exquisitely rendered tondos, round mounds of fabric printed with complexly colored images of decorative vases that floated within decorative backgrounds. The vases were meant to be representative of him — someone who has often felt objectified.

“I could tell you all the ways that I’ve been treated like an object,” Norsworthy said, adding that it was easy “to see myself as this trophy, a vessel that has the potential to be the carrier of something.”

“I remember being called ‘brother from another planet’ all the time, people snickering at the [professional looking] clothes I wore on set.” These two exhibitions of his work, he says, were the first time he has been able to explore his “lived experiences of marginalization.”

It was only when he stopped reinventing himself to fit changing professional contexts that he began to make art that helped him make sense of who he is, for himself.

In one corner of “Interior Dialogue,” Norsworthy installed a seating arrangement with wallpaper that repeats the word “Blackity” and a display case with ceramic bowls and potted candles. The bowls represent archetypes that are popularized in the Black vernacular (a paper handout provides the translation key). The terms include bougie, savage, ratchet (or wretched), shady, snatched, pressed, thirsty and extra — all ways he responded to the exclusion and tacit rejection he often felt growing up, which pressed him, and to compensate, he became extra.

This effort began at a young age. Born to upwardly mobile parents in South Bend, Indiana, the eldest of three children, Norsworthy learned to adapt to frequently changing environments as his father made his way up the corporate ladder at John Deere in the early 1970s. His mother, Sonja, and younger siblings, Ryan and Courtney, moved house according to where the company needed Ronald senior to go. By the time Norsworthy was in sixth grade, he had attended five elementary schools and says he wasn’t given the time or space to develop bonds with people outside his family. When he was 13, they relocated to the Chicago suburb of Crystal Lake, where everyone as far as he could see was white. Researching the 1980 census, he later learned that his family was the only documented Black family in the entire county. “I found myself outnumbered, surrounded by whiteness and so just felt othered,” he said. “There was this internalized shame about my queerness.” A response to the shame was to become a perfectionist and “over-excel at everything.”

This tireless work earned him an undergraduate berth at Princeton University. But the issues of recognition and acceptance did not dissipate. “It wasn’t just my queerness or my race, but now my class, and educational background, and where my family summered, and who were my people.”

He describes for me a repeated scene in the university cafeteria where he stood with his tray of food, being watched and beckoned by both a table of Black classmates and a table with white students to join them. He feels that he always made the wrong choice, perhaps because there was no table there at that time that could accommodate his intersectional identities, which he felt were tolerated, not celebrated. As Norsworthy tells it, “If I wasn’t dealing with anti-blackness from white people, I was dealing with homophobia from Black people.”

Norsworthy reprised a version of his ordeal in his “Reparation Tower, Harlem” installation, which consisted of a mocked-up sales office for a fictional luxury tower in Harlem. The office had two entrances, one marked “Whites Only” and the other “Colored Entrance,” and whichever the participant chose was visible to other visitors via video monitors. The implicit suggestion here is that while visitors can make their own choices, they will be judged for them. The experience of being surveilled and socially ranked replicated the hypervisibility Norsworthy has felt throughout his multiple occupations. As for how the culture regards him and his racial identity, he depicted the colored entrance as leading to a Plexiglas cage.

To further explore the marginalization of his race, Norsworthy in 2016 started collaborating with his partner, David Anthone, with whom he lives in Roxbury, Connecticut. Under the name DARNstudio, they are producing an ongoing series of large pieces he refers to as “quilts” that consist of custom-made, souvenir matchbooks — each a tiny cardboard memorial — bound together with thread and configured in patterns that produce a large text.

Their piece “CAKEwalk, From Another Country Quilt Cycle” (2020) is part of the exhibition “Trying to Make Sense of It: 9/11, Loss, and Memorial Quilts,” on view through Oct. 16 in Lincoln, Nebraska, at the International Quilt Museum. “CAKEwalk,” according to the museum description, “takes its name from competitions in which enslaved Black people performed exaggerated dances caricaturing the gestures, dances, and social customs of white plantation owners.” The work refers to Norsworthy’s feeling of constantly being asked to perform — to perform blackness, or queerness, or masculinity, or membership in the bourgeoisie. Today, the pair says, the quilts “allow them to remember and memorialize real lives that were lost” precisely because they couldn’t, or wouldn’t, perform in ways deemed acceptable.

The matchbook covers display logos representing the town or specific location where a Black person was killed by law enforcement officers, while the backs show the victim’s initials and date of death. The resulting skeins operate on several levels at once: a visually colorful and enticing mosaic, a formally innovative version of the quilt, and a kind of sotto voce warning that the act of remembering these lost lives is a banked fire that could easily spark into an engulfing blaze.

For the 2021 exhibition at Project for Empty Space, titled “tell a lie about me. I’ll tell the truth about you,” Norsworthy said he allowed himself to consider more expansive possibilities for the story of contemporary Black life. Starting with images of Black people culled from famous paintings, films and architecturally historic sites, Norsworthy digitally recontextualized the figures, inventing a new narrative for them. He generated inkjet prints of these manipulated images and built up 3D reliefs that he framed and hung. The piece “Stepford (allegory no. 4),” featuring an image of two women dancing together, exultantly manifests his ambition to make a place for celebrating the presence of Black people, taking in the whole range of gender identity, sexual orientation and socioeconomic status.

At 55, Norsworthy is producing artwork that might have rescued the young man who stood in the cafeteria holding that tray, both afraid and resolutely resigned to his fate. He has made his own dining arrangement, providing a nourishing feast. “Here,” he says, beckoning to a spot at his side, “you can sit with me. I’m holding this space for you.”