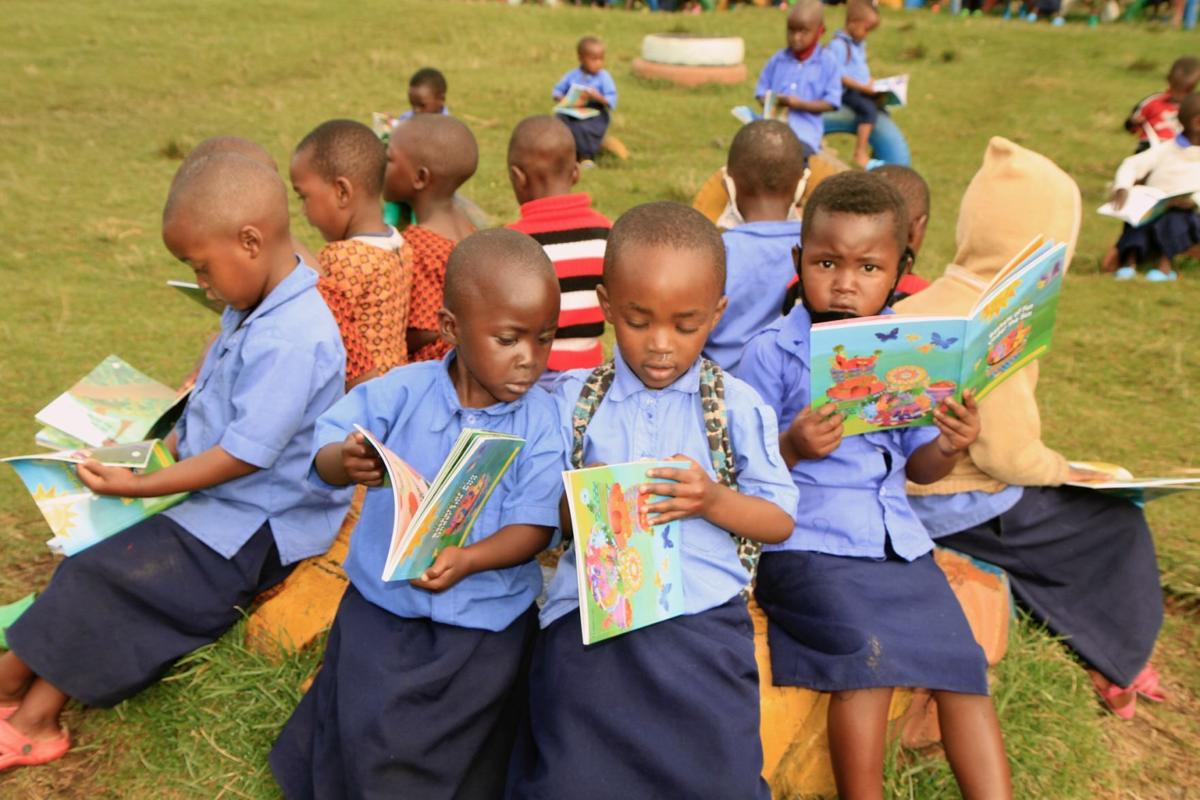 Preschoolers in Rwanda look at the books created for them by String Theory School students in Philadelphia. — Submitted 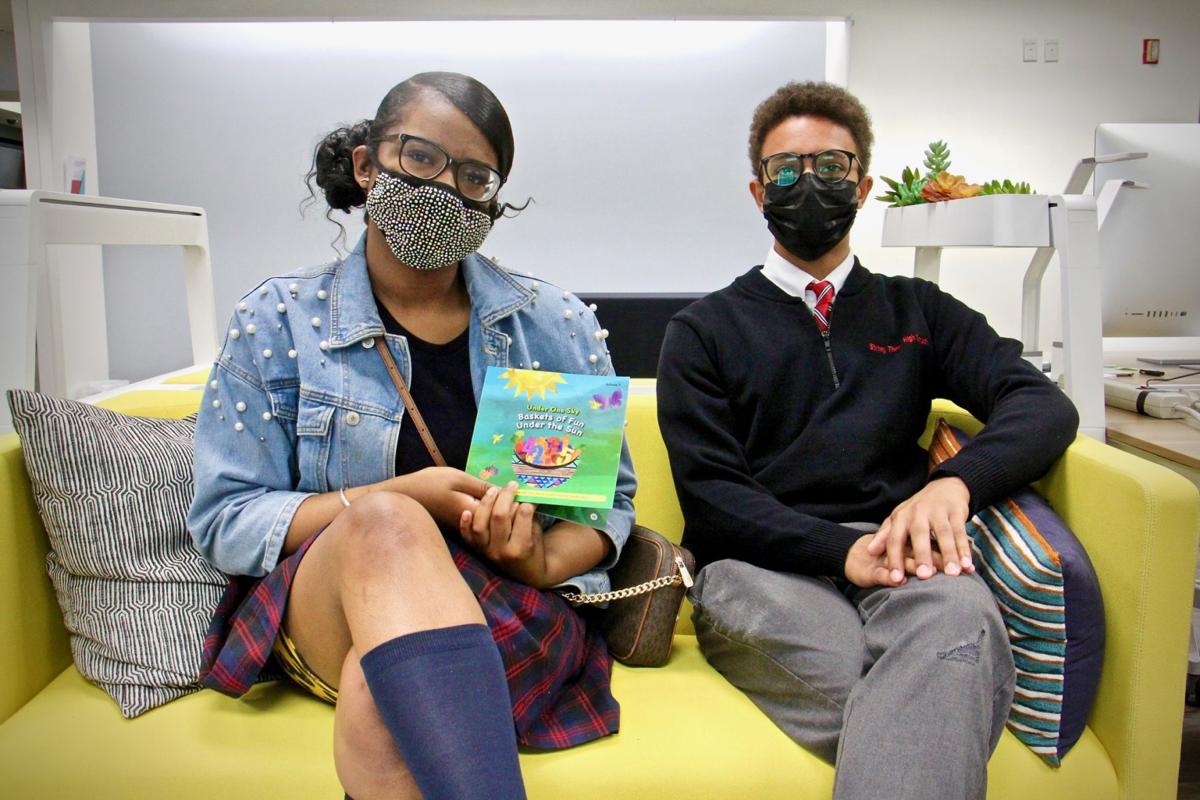 Preschoolers in Rwanda look at the books created for them by String Theory School students in Philadelphia. — Submitted

About 1,000 preschool children in more than a dozen schools in Rwanda have each received a picture book designed by a group of high school students in Philadelphia.

At String Theory charter’s Philadelphia Performing Arts school, 21 teenagers ranging from grades 9 – 12, created “Baskets of Fun, Under the Sun” with Books and Beyond USA, an initiative to produce books for young readers in Rwanda.

According to BBUSA, Rwanda has few books for very young readers in English, the primary language taught in schools since 2008, and for many this will be the first book they own. A report by the Rwanda Children’s Book Initiative said children’s books in the national Kinyarwanda language are “virtually nonexistent.” The dearth of books has prompted local Rwandan publishers to band together in advocating for early childhood literacy.

“Baskets of Fun” has thirty-six lavishly illustrated pages about colors and numbers. The students at String Theory tailored the book by centering it on colorful things they determined kids in rural Rwandan villages might be directly familiar with, like purple beans, red tomatoes, and golden monkeys.

“It’s designed, like many preschool-age books, to be a sort of a primer: things that they see and encounter,” said Danielle Shylit, director of innovation at the school. “Our students did amazing research on what would be culturally relevant for the students, what would matter to them, what would bring them joy. We want joy to be a big part of what we bring to kids.”

The students in Philadelphia learned that monkeys, for example, are common in Rwanda, particularly in the mountainous jungles of the northern part of the country, where most of the participating schools are located.

On the other hand, the common domestic cat is quite rare in Rwanda.

“We see cats, but do they have cats?” said Nia Armstrong, a junior at String Theory. “That was really a challenge of making a book. We had to step out of the box and get out of our comfort zone. We couldn’t just draw characters, because they don’t see the same things that we see. So we had to put ourselves in their shoes to be able to write to them.”

Another student, Odin Edwards, is focusing his high school studies on engineering and robotics, but he enrolled in the elective design class because he is a fan of art.

He found the task of creating a visual story for children halfway around the world to be challenging.

“When we were doing our original pitches, I really had a hard time understanding that they had an entirely different view on the world than we do,” said Edwards. “At first I couldn’t wrap my head around it. I pitched some odd ideas, I will say. But eventually when everything got put together, I could see how something as simple as colors and numbers would make the book more relatable for preschool students in Rwanda.”

Books and Beyond USA, an initiative of the international nonprofit Neu Global, partners with American high school students to design books for children in Rwanda. Since 2015 BBUSA has produced eight books, distributing 12,000 copies through rural schools in Rwanda.

“Owning a book is a dream which is becoming a reality for our children. It’s quite difficult for parents to afford a book for their children,” said Grace Munezero, the headmistress of Arc en Ciel school in Musanze, Rwanda, who received copies of the book for all her 41 students.

“Baskets of Fun” is the first BBUSA book to be entirely digitally illustrated. The 21 students at String Theory collaborated on the concept and design, each working from home during the pandemic. No one person is responsible for any single image, or even any one figure within an image.

To give a sense of stylistic continuity throughout the book, the students individually developed textures, shapes, and patterns, which together became an alphabet of visual material. Then they pieced those elements together to create the images with digital collage software.

The text, a series of simple rhyming couplets, was authored by BBUSA founder Nancy Uslan.

“They really had experience working with a real-world client. This wasn’t one-and-done. This was a lot of edits. This is a lot of proposals. This was a lot of hearing some pretty harsh stuff,” said Desnouee. “This was not an easy project, but they rallied and they kept at it. We are super proud of them.”

The books were distributed in March. This week videos from Rwanda came back to String Theory with songs, applause, and thanks from teachers and students who received the books. String Theory is currently teaching on a hybrid model where students can choose to come into the building for classes, or log in remotely from home. Of the 21 students who worked on the book, only Edwards and Armstrong were able to come in for the video presentation.

Armstrong normally does not come into the String Theory building at all. She has been doing schoolwork entirely from home for over a year, but she masked up and made the trip for the Rwanda videos.

“This was really an event that I needed to be at. I really felt like this was a successful thing, so I was, like, ‘Yeah, I got to be there for this,’” she said. “This is really something special, and all the dedication and hard work that we put into it. Of course, I had to show up.”