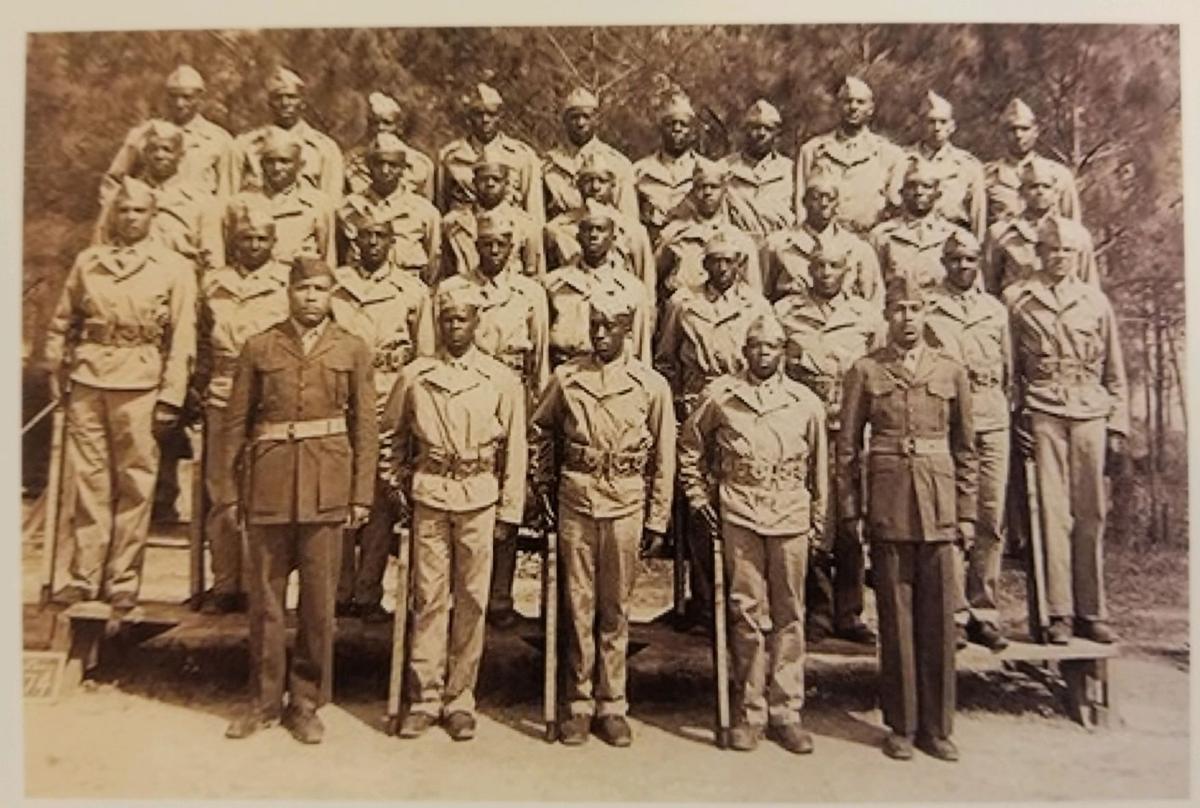 Master Gunnery Sgt. Carroll Braxton was a drill instructor at Montford Point camp in Jacksonville, North Carolina. He is in the first row, far right. 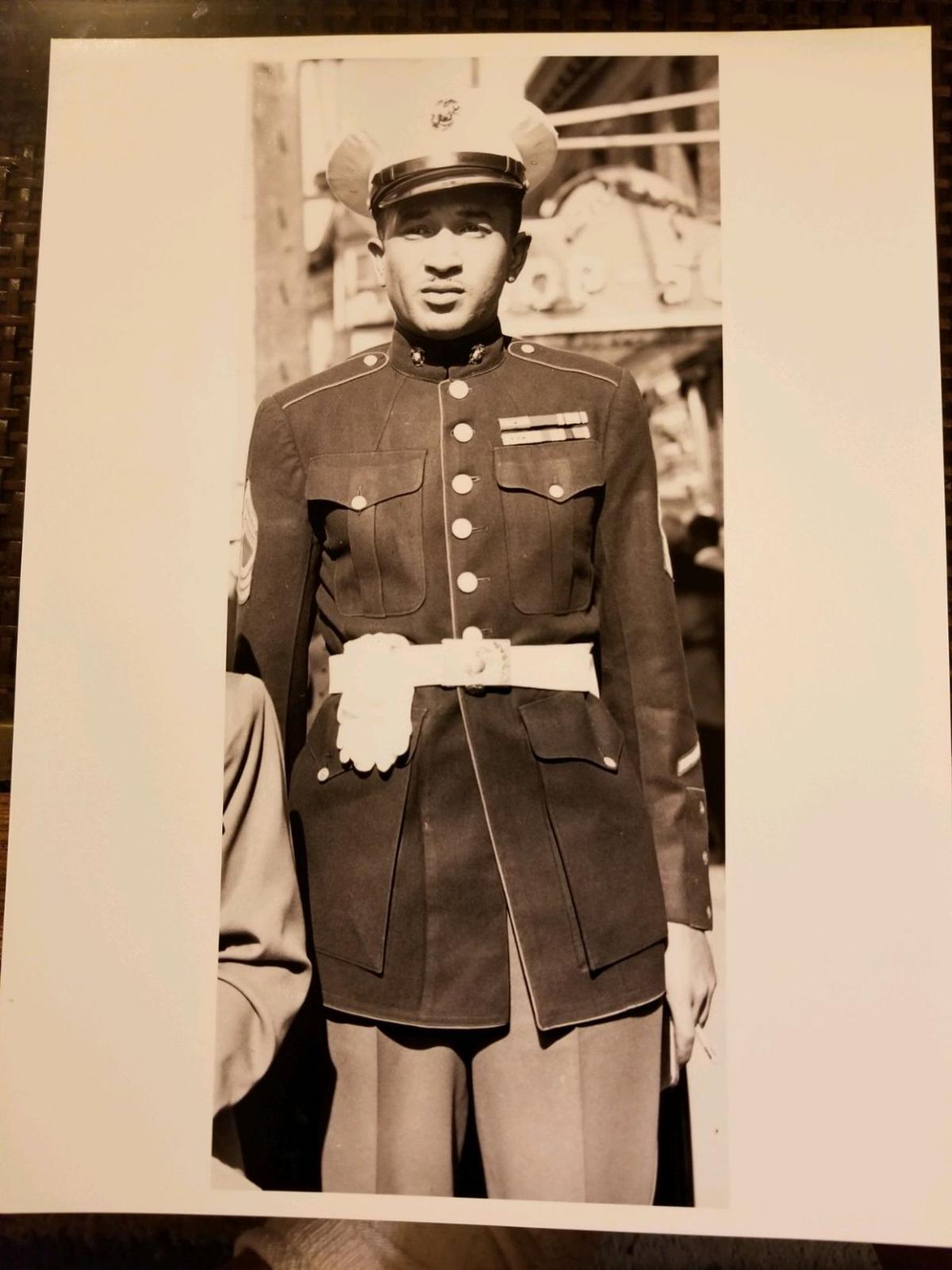 Philadelphia’s own Cecil B. Moore (noted lawyer, civil rights activist and a city councilmember) was one of the original Montford Point Marines and rose to the rank of sergeant major, the highest rank that a Black man was allowed to attain in those days.

Master Gunnery Sgt. Carroll Braxton was a drill instructor at Montford Point camp in Jacksonville, North Carolina. He is in the first row, far right.

Philadelphia’s own Cecil B. Moore (noted lawyer, civil rights activist and a city councilmember) was one of the original Montford Point Marines and rose to the rank of sergeant major, the highest rank that a Black man was allowed to attain in those days.

The phrase “history repeats” is often viewed as cliche. In American history, the phrase is often proven true, however even more often than that, great moments in this country are often lost in time. Unable to experience it and too young to comprehend, very important pieces of history have been trapped, waiting for someone to pass it along.

“They didn’t know where to train them,” Geeter continued. “There are two training posts for the Marines. One in San Diego and another in Parris Island (South Carolina). They chose to send these African Americans to Jacksonville, North Carolina, to a piece of land we now know as Montford Point.”

According to Geeter, around 20,000 African-American recruits trained at this segregated facility between 1942 and 1949. Many served in the Pacific Ocean during World War II and were part of iconic battles such as Saipan, Iwo Jima and Okinawa.

In 1949, the North Carolina base was disbanded due another executive order. President Harry Truman signed Executive Order 9981 into law in 1948 establishing the President’s Committee on Equality of Treatment and Opportunity in the Armed Services, committing the government to integrating the military.

“The Montford Point Marines never receive the recognition that they deserve,” Geeter said. “A lot of people have heard of the Tuskegee Airmen or the Buffalo Soldiers, but no one knows of the Montford Point soldiers.”

“The reason that a lot of people don’t know about them and why a lot of Marines don’t know is because they didn’t want you to know,” Geeter continued. “To talk about the Montford Point Marines, you have to bring up all of the people who were against them in the beginning all the way up to the Commandant of the Marine Corps at the time, Maj. Gen. Thomas Holcomb.”

According to Geeter, Holcomb was asked by a reporter one day about African Americans. Geeter states that Holcomb was so vehemently against Blacks that when a reporter asked if he’d rather have 250,000 Blacks or 5,000 whites, Holcomb’s answer was that he would rather have the whites.

“He further stated these Black men were trying to break into a club that doesn’t want them,” Geeter said. “So when you talk about Montford Point, you have to bring up all of this and the Marine Corps has not really embraced their dark past until recently.”

As for Geeter and the Montford Point Marine Association, their goal is to preserve the legacy of these Marines, continue to tell their story, and to present each service member with the Congressional Gold Medal for their service and sacrifice.

Moore was noted lawyer, civil rights activist and city councilmember. Alston founded Beech Corp. and was a former president of the Philadelphia Board of Education who played a key role in the development of many businesses and more than 1,000 single-family homes in North Central Philadelphia.

The audience will be treated with first-person accounts by original Montford Point Marines. This program will be presented via Zoom Webinar. On the day of the program (Tuesday, Feb. 23 2 p.m.-4 p.m.), use this link to join: https://temple.zoom.us/j/95937012559.

“I live for this,” Geeter said. “I have a passion beyond passion for this. I’ve been teaching this history for 43 years. It’s a great story and when folks hear it, they ask themselves why didn’t I know about this before it’s a great story.”

For more information about next week’s program, contact Leslie Willis-Lowry at lwillis@temple.edu.