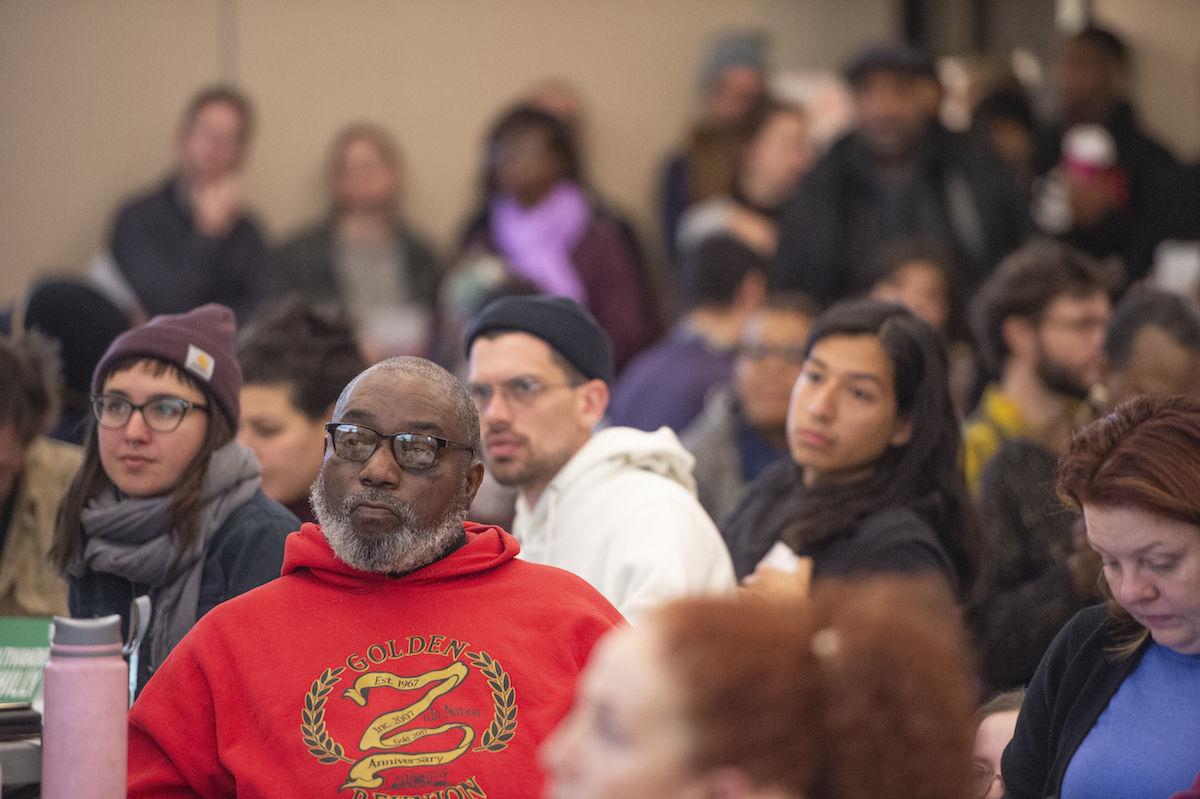 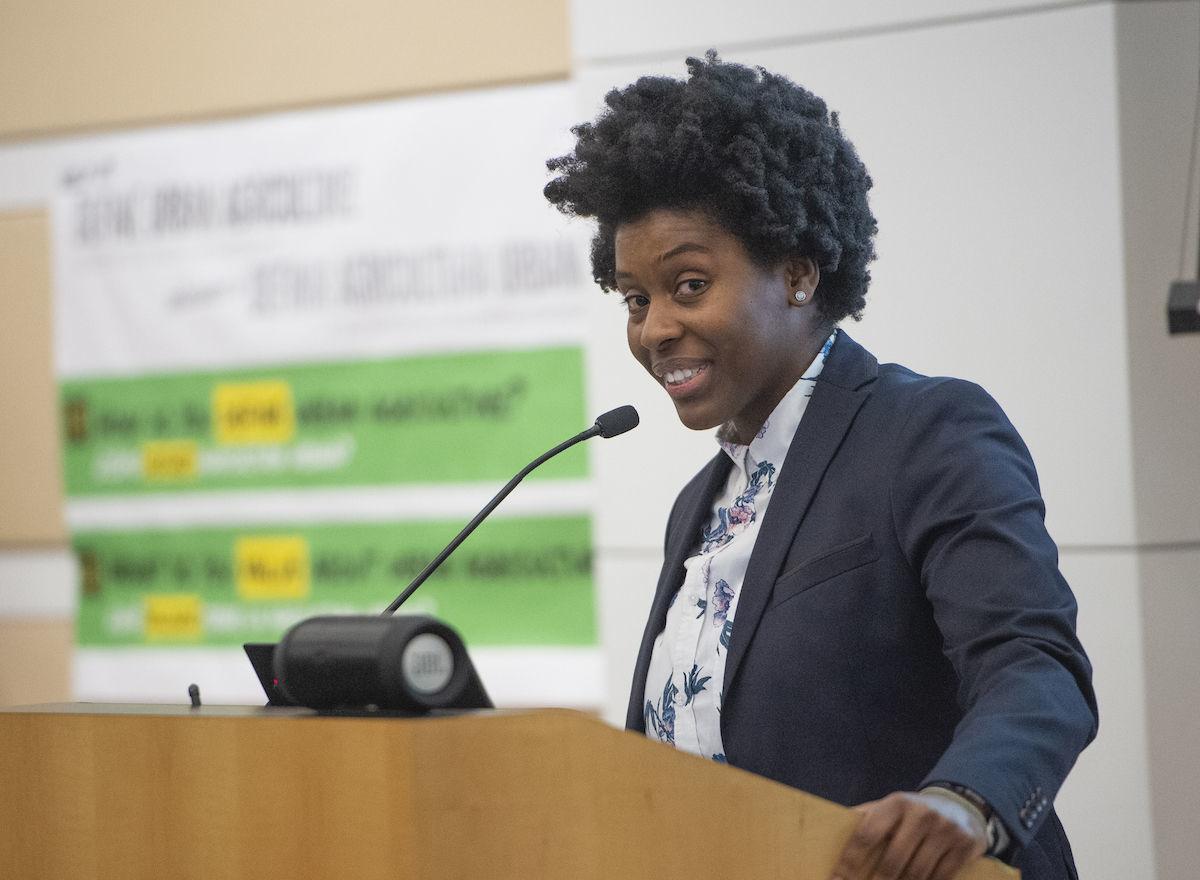 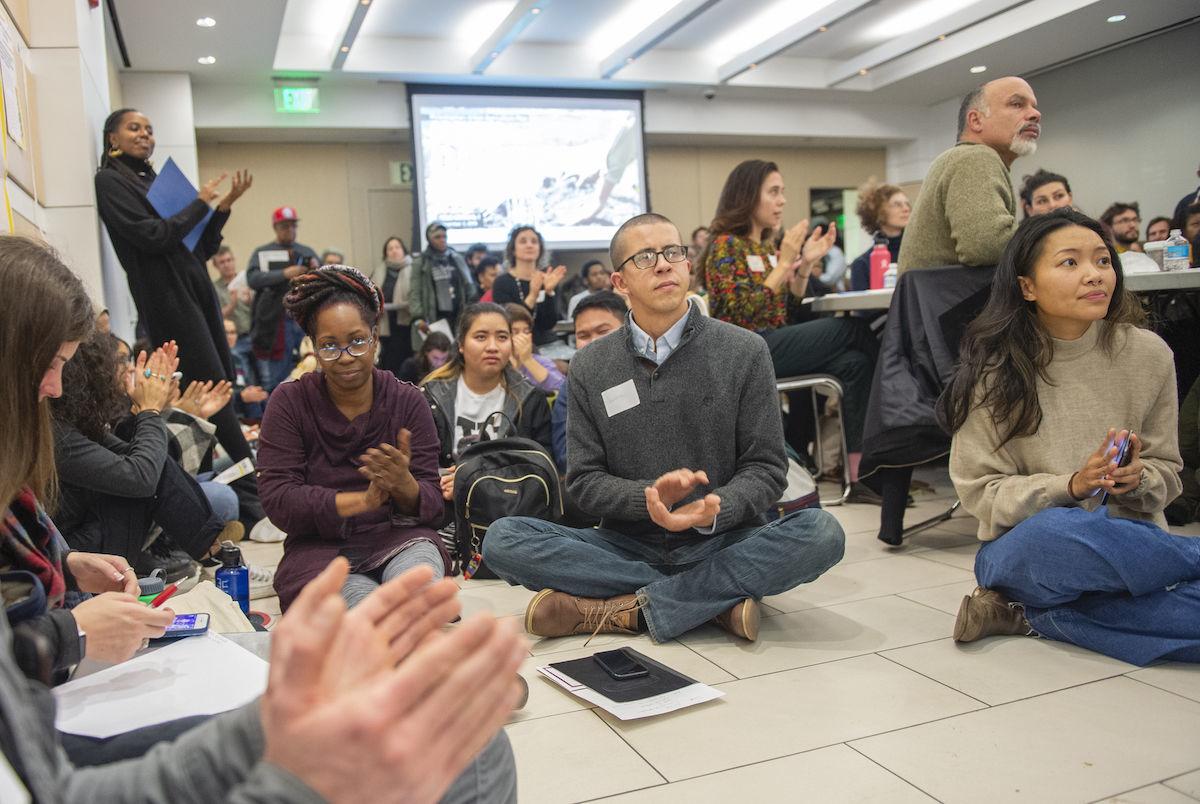 An overflow crowd from around Philadelphia applauds speakers at the first public meeting for Philadelphia's Agricultural Plan on Tuesday, Dec. 2, 2019. — WHYY Photo/Jonathan Wilson

An overflow crowd from around Philadelphia applauds speakers at the first public meeting for Philadelphia's Agricultural Plan on Tuesday, Dec. 2, 2019. — WHYY Photo/Jonathan Wilson

Philadelphia’s urban farmers carried cardboard signs shaped like the carrots, tomatoes, and eggplants they grow and demanded help from City Council. More than 100 growers and food justice advocates filled Council chambers on a sunny fall day in 2016 and pled for support and protections against displacement.

That seed germinated and gave fruit to a process that started on Tuesday night when more than 250 residents packed a room at the central branch of the Philadelphia Free Library to start the city’s first-ever urban agriculture plan.

Hundreds of Philadelphians grow food in more than 418 gardens and farms in the city, according to Richards’ team’s initial research. Seventy percent of those gardens are in areas with a high concentration of households living in poverty and little access to fresh, high-quality food. These farms provide benefits recognized by city officials yet they remain vulnerable to eviction because, often, they don’t own the land they tend. One in three active farms sits in gentrifying areas, where land values are rising and the level of construction activity rates among the highest in the city, according to the research.

“Most places where gardens are being threatened are in places with higher development pressure,” said Kirtrina Baxter, an organizer with Soil Generation, a Black and Brown-led coalition of gardeners that is leading the planning process together with Interface Studio.

Philadelphia has lost 141 gardens and farms in the last four years alone, researchers say. Most of the farms and gardens are in areas where the majority of residents are immigrants, Black or Latinos. Why these community gardens are closing is the question Richards’ team wants to clarify during the planning process.

That process begins with gathering more information about the state of farming in the city through three more public meetings, online surveys, focus groups and other outreach, done with the help of a steering committee. A draft of the plan is slated for release in July 2020 with the final plan including recommendations for implementation released by September 2020.

“We came up with the plan named ‘Growing from the Root’ because of the significance of growing from something that is interconnected, secured and also based in history,” Richards said. “Growing from the root is a radical act. It helps us think about the new possibilities while maintaining accountability for what comes next.”

The roots, Richards said, represent ancestral practices and signify an unwillingness to give up.

“Lastly, roots represent the nourishment that comes from the collective work … that makes us powerful,” Richards said.

Tuesday’s meeting began with an honoring of the indigenous tribes, such as the Lenape Nation, that began growing on the land long before Philadelphia was settled by Europeans. The plan’s ultimate goal is to preserve that rich local history and create ways to protect existing growing spaces while encouraging new farms, planners said.

“Where there has been great disinvestment and disenfranchisement of communities, people have created a way to feed themselves and heal themselves despite the barriers working against them,” said Soil Generation’s Ashley Gripper.

Richards and the team see an opportunity to expand the amount of public land used for growing. Today, gardens and farms occupy about 500 city lots. There are 42,100 vacant lots and buildings in Philadelphia, according to their research, and public agencies own 14% of them, roughly 5,880. That means plenty of land that city agencies could hand off to a new agricultural-minded owner, planners said.

“More needs to be done, clearly, because even though we have those clusters [of farms] here, those clusters aren’t enough, said Baxter. “Eighty percent of folks don’t have access to a garden, to a grocery store or to anything they can remotely call good food.”

Baxter said she has seen people take over abandoned city lots because they come from communities that traditionally grow food to survive. Over the years, the gardens become an oasis where neighbors gather and work together, making crime-prone areas safer and more attractive.

“Urban agriculture is so much more than just food and health and agriculture. These are spaces where a lot of different displaced families have been able to preserve and practice their cultures despite being away from their homeland,” said Sonia Galiber, an organizer with Soil Generation.

The way of the past — and the future

Those who came to Tuesday’s meeting were asked to respond to a survey with questions about their farming practices, their definition of urban agriculture and its value and other relevant topics. They were asked to provide information about gardens that have closed, and help expand the city’s understanding of spaces that have been lost.

Lauren Troop is one of the people who came out. She is part of a threatened garden where Kensington residents have cultivated fresh vegetables for seven years. The César Andreu Iglesias Community Garden in the corner of Norris and Lawrence streets, like many gardens in the city, occupies parcels owned by multiple entities. Two of them are owned by developers — one of them fenced his property this year forcing gardeners to move their beds across the street — and the other parcels are either vacant and privately owned, or in the hands of the city’s Land Bank.

“We’ve had a lot of trouble trying to get the properties out of the Land Bank, they’re just kind of being held there. There’s not really a clear process to acquire that land, so it’s been very frustrating,” Troop said. “But I think the people that are leading this project are super knowledgeable, and I think they’re people that the whole city can trust.”

Kalaf Celestine, who grows food in Mantua, said the plan is coming right on time.

“Growing your own food and self-determination is a novelty now, but in the future, it will become a necessity,” he said.

This story first appeared on WHYY.org.

Kensington residents have cultivated fresh vegetables on abandoned lots in the corner of Norris and Lawrence streets for seven years. Last yea…

When Victor Young saw a few abandoned lots in his West Philadelphia neighborhood, he knew he had found a perfect place to start a garden. Grow…

Philadelphia has named city planner Ashley Richards as its first-ever urban agriculture director. Richards will direct the creation and implem…