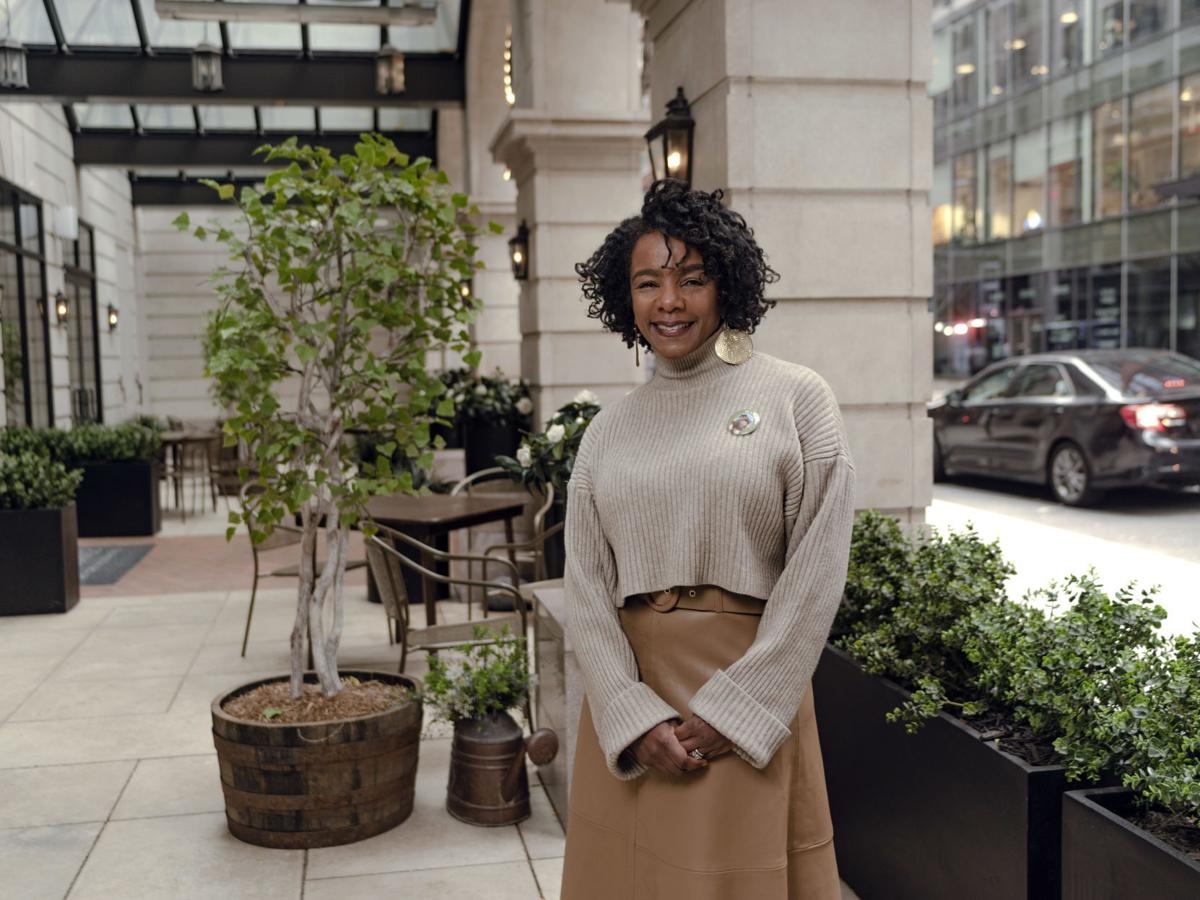 Leah McGowen-Hare, a vice president at Salesforce, in Manhattan on Dec. 8, 2021. For a recent convention, McGowen-Hare came up with pins to indicate the wearer’s comfort level with different forms of social interaction. 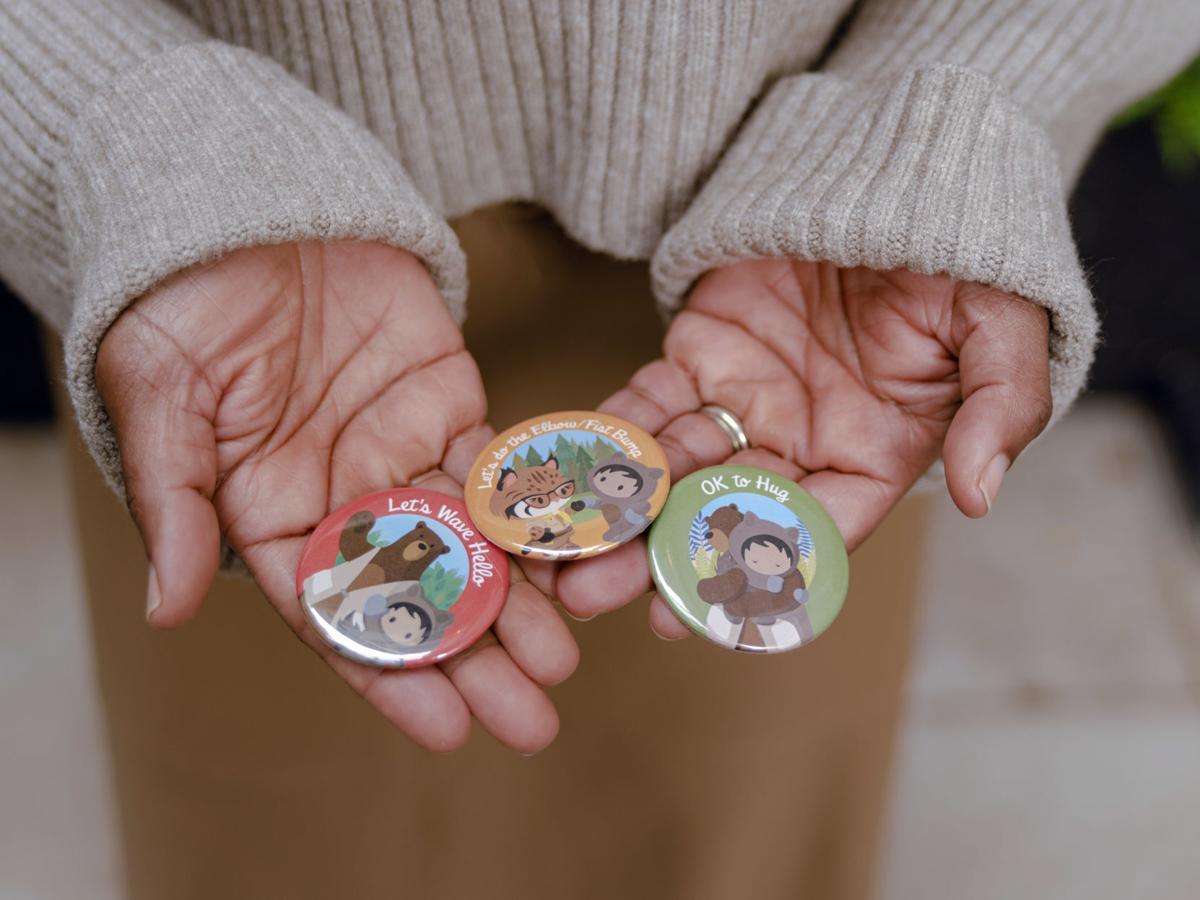 Leah McGowen-Hare, a vice president at Salesforce, displays the pins she came up with to indicate the wearer’s comfort level with different forms of social interaction in Manhattan on Dec. 8, 2021. Public health conditions have shifted; with Omicron spreading fast, hugging and fist-bumping might seem even less enticing. 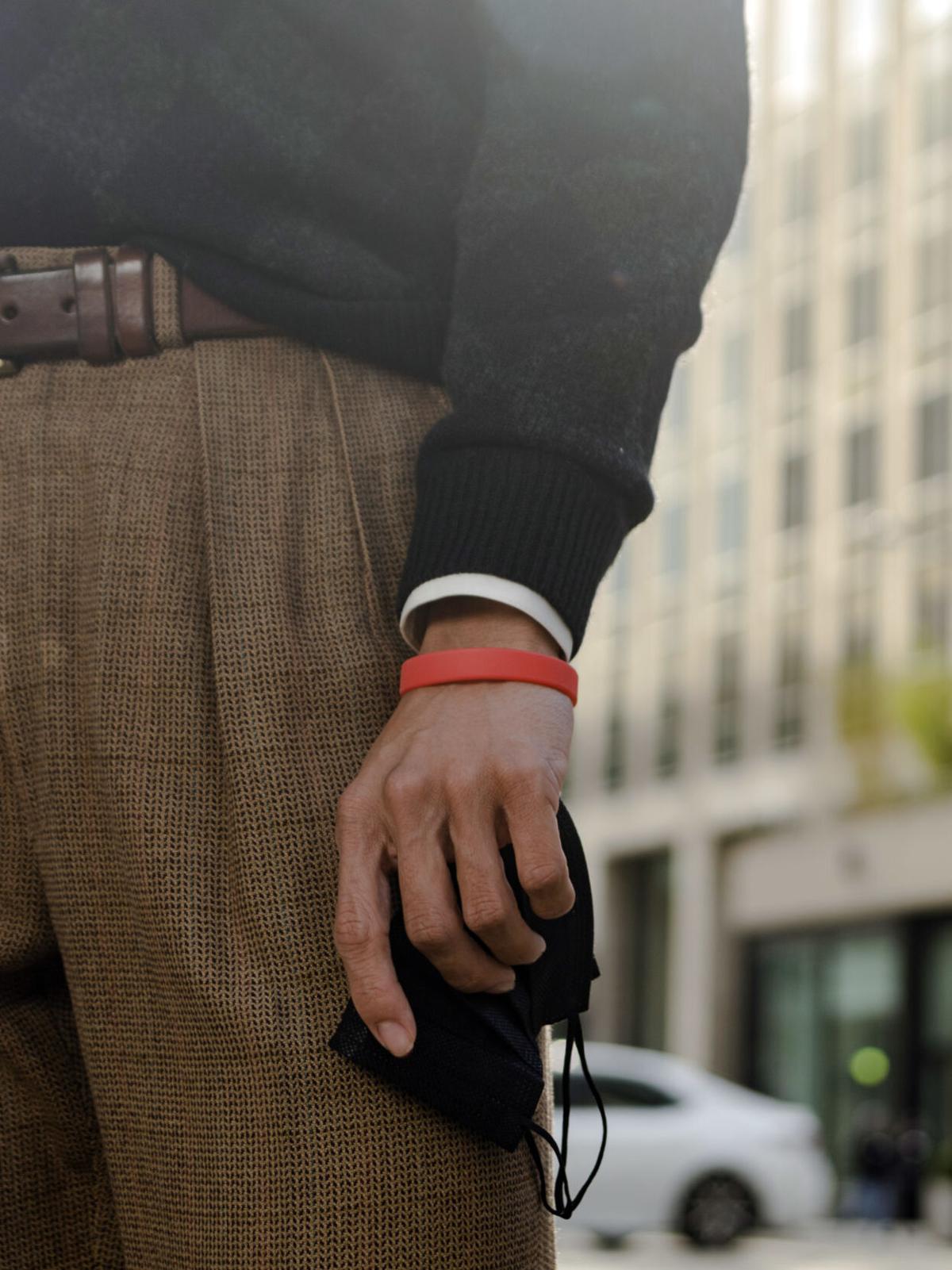 A red wristband, indicating that the wearer prefers low risk social interaction, in Manhattan on Dec. 19, 2021. Employers are desperate to figure out a way to safely get employees back to their desks. Enter the humble wristband.

Leah McGowen-Hare, a vice president at Salesforce, in Manhattan on Dec. 8, 2021. For a recent convention, McGowen-Hare came up with pins to indicate the wearer’s comfort level with different forms of social interaction.

Leah McGowen-Hare, a vice president at Salesforce, displays the pins she came up with to indicate the wearer’s comfort level with different forms of social interaction in Manhattan on Dec. 8, 2021. Public health conditions have shifted; with Omicron spreading fast, hugging and fist-bumping might seem even less enticing.

A red wristband, indicating that the wearer prefers low risk social interaction, in Manhattan on Dec. 19, 2021. Employers are desperate to figure out a way to safely get employees back to their desks. Enter the humble wristband.

But McGowen-Hare, a vice president at Salesforce, realized that even the people who are with her on Team Hug might have changed their calculation on what is too close for comfort these days. So for Salesforce’s convention in September — which she likened to a family reunion — she landed on a solution, something to separate the huggers from the mere fist-bumpers.

The 1,000 attendees of the San Francisco conference, known as Dreamforce, were greeted with three options for pins to wear. Green: OK to hug. Yellow: Let’s do the elbow/fist bump. Red: Let’s wave hello.

“Before someone came in I’d be like ‘hold up, let me see and get ready,’” McGowen-Hare said, scooching back in her seat and mimicking the once-over she would give attendees as she located their pins. “It was kind of fun. Like even though I was green, that doesn’t mean my green tops your yellow right? Whatever I did, I just did it with a lot of energy.”

More than three months since Salesforce’s conference, public health conditions have shifted; with omicron spreading fast, hugging and fist-bumping might seem even less enticing. Still, plenty of corporate workers are required to be in their offices, or are returning in the coming months with new vaccine and testing rules in place.

Crisis breeds innovation, and the difficulties of conducting in-person business during the pandemic have exposed office workers to a tactic once reserved mostly for camp counselors, or bosses with capture the flag captain energy: color coding. Employers who want workers to come back to their desks are trying to accommodate different degrees of COVID risk tolerance. One approach they’ve landed on is offering people accessories — wristbands or pins — that signal their preferences for social distancing, masking and shaking hands.

Preserving personal space in the office isn’t a challenge unique to this moment. Still, the pandemic has given the task higher stakes, especially for employees who may feel professional pressure to get face time with their bosses. And now, with case counts rising sharply, workers are in even greater need of safety strategies.

At some workplaces, colorful wristbands have offered a way for people emerging from nearly two years of relative isolation to silently communicate their boundaries. As an added bonus, wristband companies whose sales plunged in 2020, when events ground to a halt, are pleased to find business picking up again. A Wisconsin company, for example, has sold tens of millions of COVID-related bands to more than 3,000 organizations over the past 18 months.

For Wristband Resources, which is based outside Milwaukee, the second Friday in March 2020 was “D-Day.” There were no more concerts, nor festivals or school retreats. Mike Gengler, the chief information officer, was shuttling between his home and the office, but he didn’t know what to instruct his employees to do. Sales dropped to nearly zero for the company, which has 140 people on staff.

About two weeks later, orders began to trickle in again. Gengler checked the delivery addresses to see where his wristbands were shipping and he found an unlikely culprit: commercial construction. These first-time Wristband Resources clients, which were reopening their construction sites, wanted an easy way to signify the employees who had completed their temperature screenings for the day.

It was a eureka moment for Gengler and his teammates, who realized that the pandemic could shepherd in unexpected uses for a multicolored set of wristbands. By that summer, his company was shipping wristbands to hundreds of offices as they reopened. Wristband Resources ended 2020 without any losses in online retailing; COVID-related wristbands made up about 60% of its revenue. The company finished 2021 with better online sales than it had in 2019.

“We’re going out for a laser tag event to celebrate,” Gengler said. “I’m proud we stayed true to who we were while a lot of our competitors chased PPE products.”

Gengler said that because of the typical holiday slowdown in business, it was too early to see how omicron would affect his sales, though he added that some companies might use wristbands for identification purposes as their vaccine mandates take effect in the coming weeks.

At Clyde & Co, an international law firm, the wristband strategy provided a measure of relief for team members who were apprehensive about the interpersonal complexities of in-person work. The firm had required its more than 2,000 employees in Britain to return to the office two days a week starting in September, though after recent government guidance those staff members are now working from home again.

Emma Thorne, an assistant at the firm, had fielded anxious questions about the impending return to office all summer from her parents, one of whom is going through a medical treatment that compromises immunity. Thorne is also pregnant, another factor in her desire to maintain some distance from colleagues. With her red wristband, she was able to walk around the office without repeatedly spelling out her safety preferences.

“It’s me not having to have a conversation with someone saying ‘oh please would you mind keeping your distance,’” she said. “Sometimes that could be misconstrued as me being rude, whereas the red wristband shows it’s purely because of the pandemic.”

The behavioral changes that the wristbands encouraged were subtle but comforting, Clyde & Co’s team members said. When people saw someone in a red wristband approach they might put on their masks and refrain from physical gestures like handshakes. The firm reported that the green labels seemed to be most popular.

Businesses that want more high-tech COVID protective measures have plenty of choices. Cisco, for example, which has made its return to the office optional, equipped its conference rooms with technology that notifies people when they have exceeded the maximum occupancy limit. The devices also inform workers about the air quality in the space, as well as how recently the rooms were cleaned.

But some executives said they have found it easiest to let workers communicate their office comfort levels, and colorful wristbands allow for that tailored approach. Workers can elect for green wristbands one week, then swap out for red ones the next.

“It’s quite nice to know how to approach people — are you comfortable sitting next to them, what distance do you keep — rather than asking what might have been an awkward question,” said Louisa Robbins, a partner in the Clyde & Co’s Manchester office, who at 53 wore a green wristband partly because she felt it put her junior colleagues at ease. “The youngsters like to be in the office and I want them to know I think it’s as safe as they do,” she added.

This article originally appeared in The New York Times.