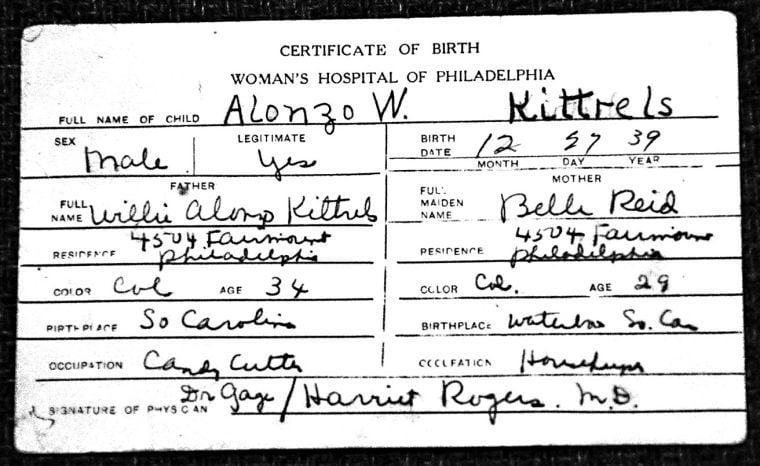 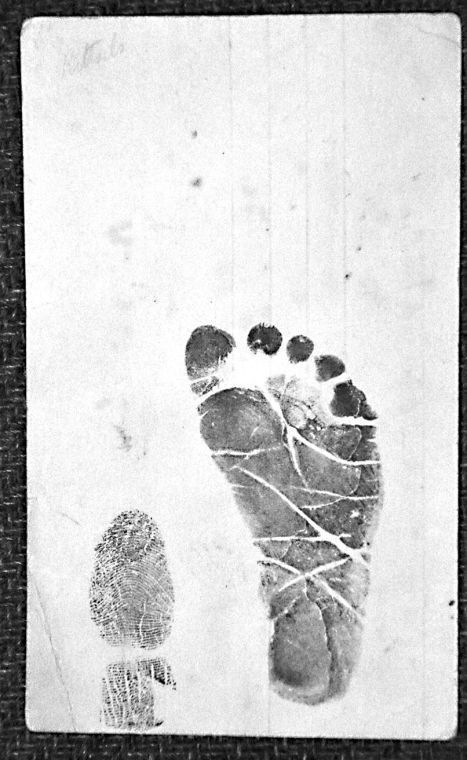 Footprints were part of the norm for a birth certificate. — PHOTO BY ABDUL R. SULAYMAN, TRIBUNE CHIEF PHOTOGRAPHER

Footprints were part of the norm for a birth certificate. — PHOTO BY ABDUL R. SULAYMAN, TRIBUNE CHIEF PHOTOGRAPHER

If you grew up back in the day, I have no doubt that at some point you heard a family member ask, “How old is Aunt Beatrice?” Or, it could have been Uncle Isaac, or Cousin Gladys, or Ms. Mamie who lived down the street.

The question could have been asked about anyone who was regarded as old. Often, no one really knew. Last week I came close to understanding how pinpointing one’s age became a challenge in the past and can be an issue today. In order to renew my expired passport for an upcoming trip, I contacted the postal service to inquire about the process. Told that I had to bring my birth certificate, I showed up with what I considered to be proof of my birth. It is a card, perhaps the size of an index card, containing the words, “Certificate of Birth.” This is an interesting piece of history as it lists my race, designated as “colored,” a section that identifies my birth as “legitimate” and my baby footprint on the reverse side. The person processing passports said a birth certificate was not required, as I was renewing a passport; a birth certificate was only necessary for a new one.

I was advised I was fortunate that a birth certificate was not necessary as what I had brought would not have been acceptable. I could not recall having anything other than this Certificate of Birth, although there must have been something acceptable in order for me to be issued a passport. I wondered what our ancestors did in order to have clarity with regard to their dates of birth or their ages, back in the day.

In speaking with friends, I learned that the type of Certificate of Birth that I had was commonplace in the past. I was born in The Women’s Hospital, which was at 41st and Aspen streets. My Certificate of Birth contained my father’s name and his occupation as “candy cutter”. My mother’s name was listed along with the occupation of “housekeeper”. The name of the doctor was also listed. There was an apparent mixup in my name. My father’s name is listed as Willie Alonzo Kittrels; mine is listed as Alonzo William Kittrels. There is no question on the part of family members that I was named after my father; all other official documents list him as “senior” and I appear as “junior.” I understand from others that errors in birth records, names in particular,were quite common, back in the day.

Some in my age group may recall relatives referring to the family Bible when there was a question of someone’s age. Back in the day, borrowing from British customs, many colonial settlers recorded births and other family information in a Bible. I recall hearing my mother and her sisters stressing the need to preserve the family’s Bible, as it was the only means to attest to the ages of my aunts, Victoria and Adeline. You may recall that family books, journals, diaries and letters often contained notes of births of family members, back in the day.

When there was no recording in the family Bible, quite often people turned to baptismal records to verify someone’s age. One of the first things you will hear from adults at midlife or in later years, is their age when baptized. Even if they do not attend church today, they recall the age and the experience of being baptized. Churches issued certificates of baptism. Such certificates contained pertinent information such as the date, one’s age at the time of baptism and the name and title of a church official. I will always recall being baptized at White Rock Baptist Church, then at 52nd and Arch streets under the leadership of the Rev. W.C. Williamson, who baptized me. For many who had no birth certificate and no entry in their family Bible, baptismal certificates served as proof of their birth and age.

While I suspect most of you have a copy of your birth certificate, some probably do not. A number of you “old-school folk” had parents, grandparents or other relatives and acquaintances with no birth certificate. So, if the family Bible or baptismal certificate were not available, what other sources provided evidence of your age or date of birth? Cemetery records often contained the name of the deceased, date, place, cause of death, age at the time of death, place of birth, parents’ names, occupations, name of spouse, name of the person giving the information and the relationship of that person to the deceased. I have heard of people traveling to old cemeteries, taking photographs of headstones in an attempt to establish the age of the deceased or someone related to the deceased, simply by the person they are researching being known as being older or younger than the deceased. Some older people have told me that in their home towns in the South, it was not unusual for someone’s age to be established by the word of the preacher; his recall of events and circumstances in the church and with church members who corresponded with someone’s birth. I have been told that the house in which one lived might have determined age in the past. For example, if Melvina was born in her grandmother’s home a year or two before it was sold or demolished and this was documented, then Melvina had to be at least as old as the number of years since the family had occupied the home. Such examples clearly demonstrate that age determination was not precise. Some of us will recall older family members telling someone’s age using the term “thereabouts.” So, Melvina could be 98 or thereabouts.

Census records are helpful in verifying births. Those in the military can turn to enlistment or discharge papers. Marriage records generally contain ages and names of parents or guardians as well as the bride and groom that can be used to support conclusions regarding one’s age. Old newspapers are turned to by some for evidence of age; insurance records, school and college records, fraternity, sorority and other organizations are relied upon by some even to this day as proof of age. Those delivered by a midwife can search for these records even if the recording of the birth is in a journal kept by the midwife. For our ancestors, slave records, while difficult to obtain, were sometimes tracked down as slave owners kept meticulous records of their slaves. This may, on the surface, appear strange. However, Michael Martinez and Athena Jones of CNN in a report about long-lost identities of slaves uncovered in old Virgina papers, point out the following, “…But these people were writing down their inventory as if you would for insurance purposes….This was the most valuable property they owned, and wanted to make sure it was recorded ... they recorded their birth dates and deaths.” I recall reading in another article that property owners were more likely to register the birth of a slave than the birth of their own children, because registering a slave was a protection of personal property rights.

There is no federal law requiring everyone to have a birth certificate and vital records are handled at the state level. It was not until the early 20th century that there was an effort to coordinate a statewide system of birth certificate registration. Thus it is understandable the challenges many people experienced in the past and some continue to experience today when asked to present a birth certificate for some official purpose. Philadelphia in 1870 was one of the earliest cities to require civil registration. But not all of you reading this column were born in Philadelphia. Those of you involved in genealogy research are obviously far ahead of most of us. But for those of you that have only what I possess, a Certificate of Birth, or have no state-recorded birth certificate, it may be helpful if you go through whatever is required to get one. Do not wait until you need one for some official purpose or until you get into a discussion with regard to your true age. Start gathering those documents that will be useful in establishing your age and date of birth; documents that were recorded with your date of birth. You do not want to have your age identified as “thereabouts,” as was the case with many of our ancestors, back in the day.

Alonzo Kittrels can be reached at backintheday@phillytrib.com or The Philadelphia Tribune, Back In The Day, 520 S. 16th Str., Philadelphia, Pa. 19146.