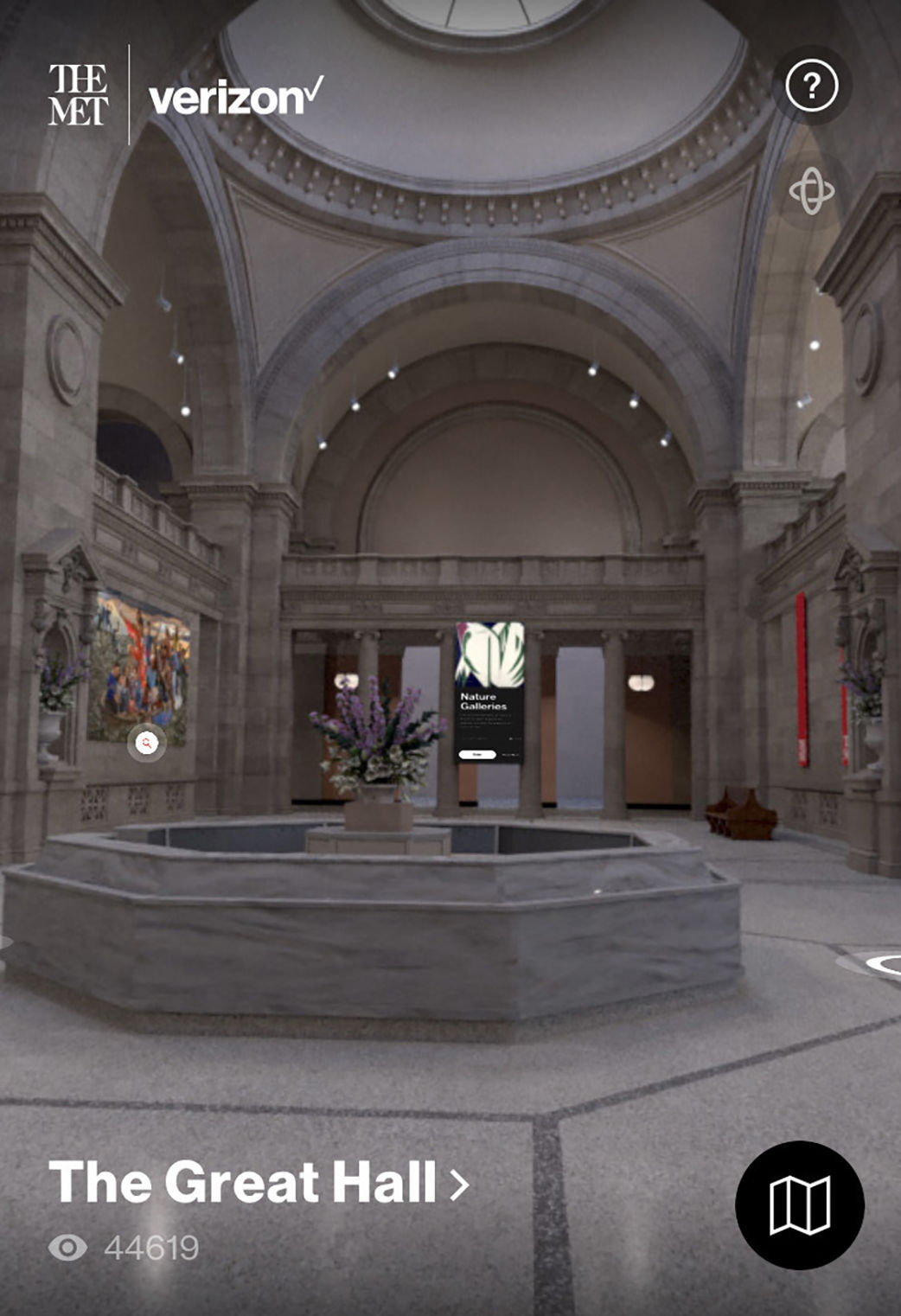 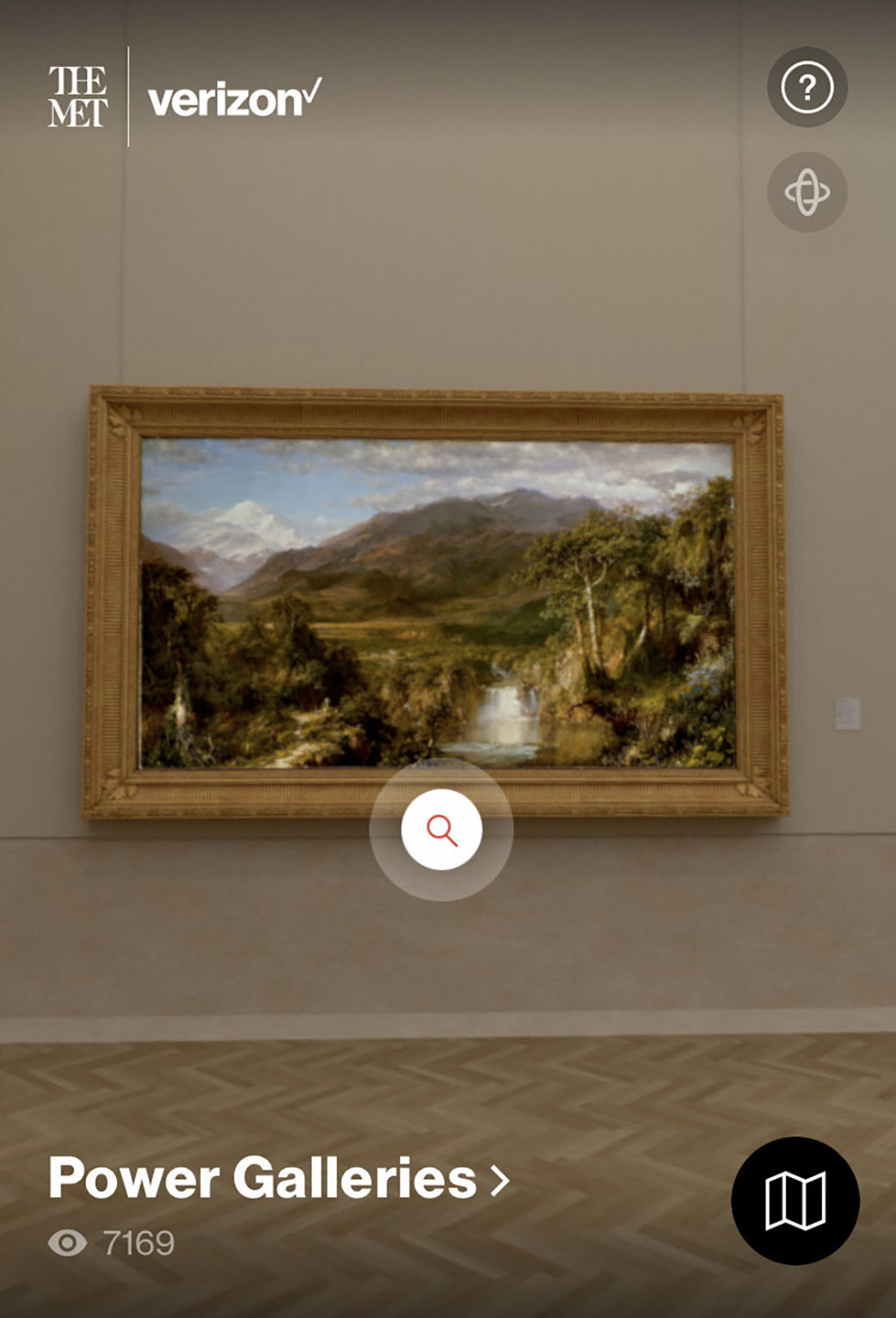 A screenshot of Frederic Edwin Church’s “Heart of The Andes” on view in the Power galleries in “The Met Unframed.” 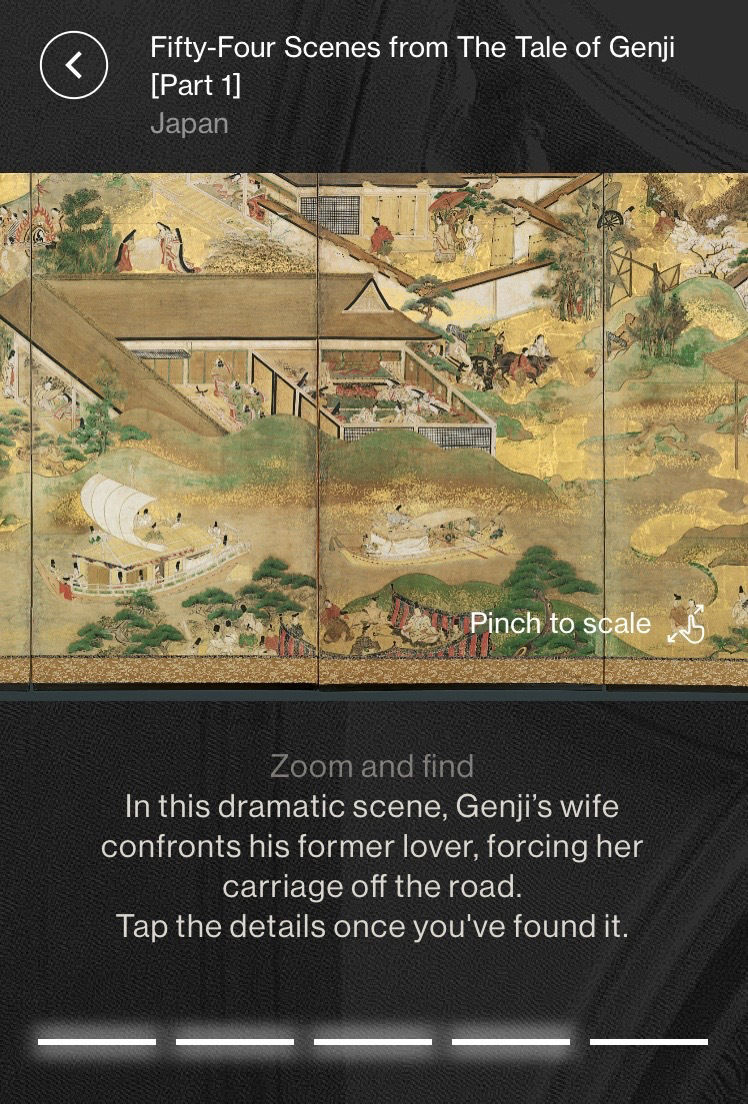 To unframe the “Tale of Genji,” the player has to find specific details in the work. —Metropolitan Museum of Art/Verizon 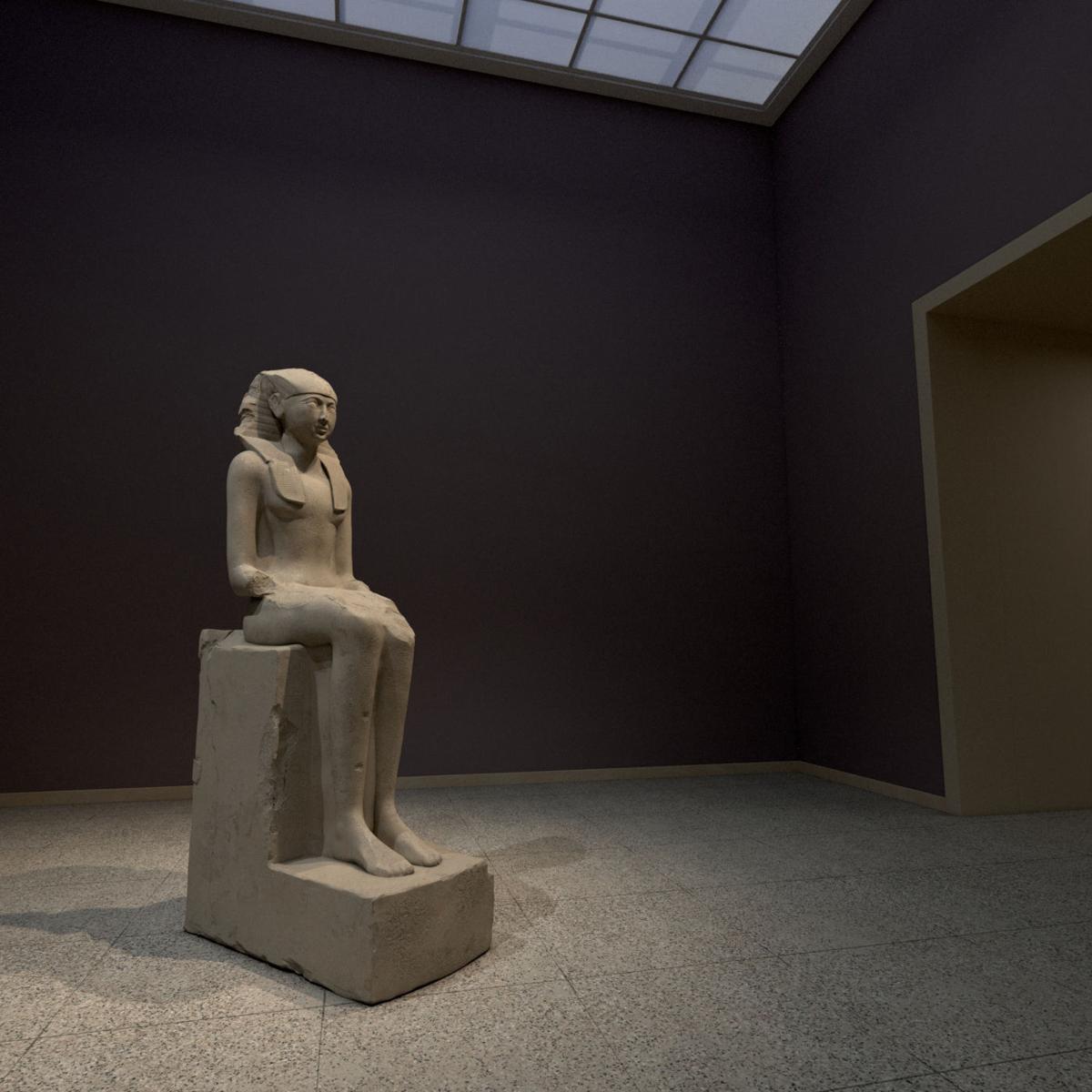 Hatsehpsut in “The Met Unframed.” — PHOTOS: Metropolitan Museum of Art/Verizon 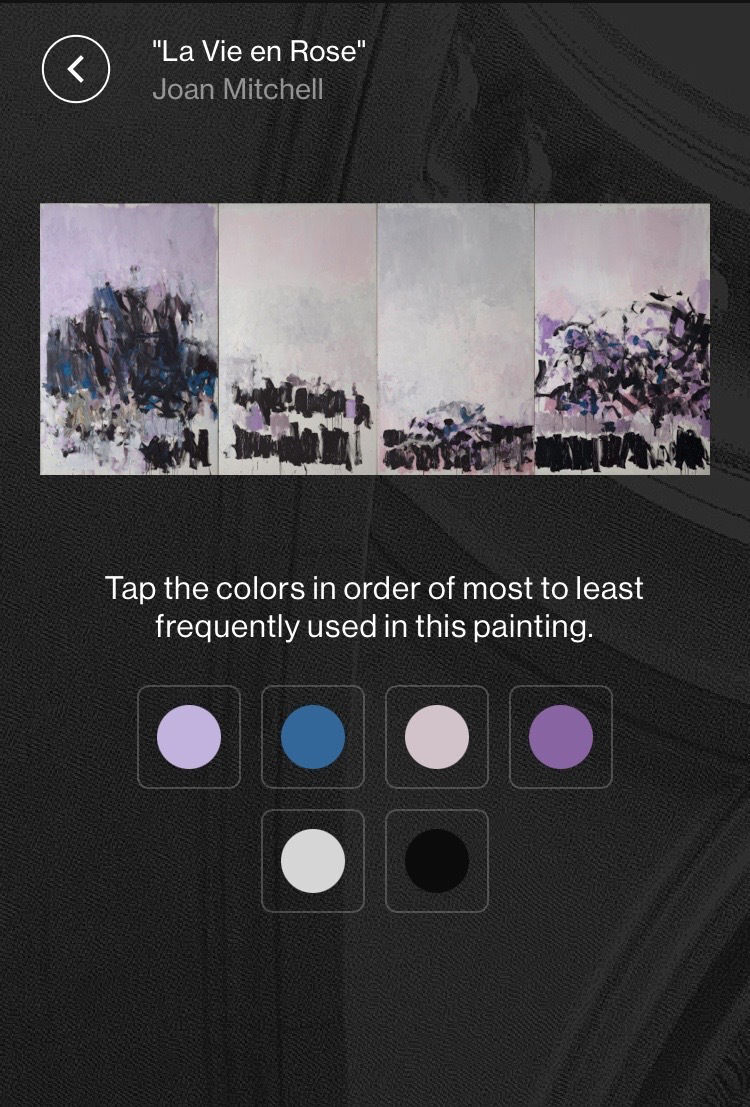 In “The Met Unframed,” the player has to figure out which colors were used most in a Joan Mitchell painting to “unframe” the work.

A screenshot of Frederic Edwin Church’s “Heart of The Andes” on view in the Power galleries in “The Met Unframed.”

To unframe the “Tale of Genji,” the player has to find specific details in the work. —Metropolitan Museum of Art/Verizon

Hatsehpsut in “The Met Unframed.” — PHOTOS: Metropolitan Museum of Art/Verizon

In “The Met Unframed,” the player has to figure out which colors were used most in a Joan Mitchell painting to “unframe” the work.

Last week, you might say I visited the Metropolitan Museum of Art. Generous terms, of course, for what was actually just me waving my phone around in my apartment.

With “The Met Unframed,” online through Feb. 15, you can “visit” four exhibitions and the Great Hall, and interact with 46 works from the New York museum’s collection. There also are “challenges” to bring the art home (i.e. put it on your wall using augmented reality). With music straight out of a spy movie and “decoding” games, it’s halfway to an art heist video game — inhibited only by the fact that with clunky navigation features, it feels a bit like being on Google Earth.

It may be last-resort optimism after months away from major museums, but “The Met Unframed” actually left me thinking about the limitations of a physical museum space. You can glean only so much information from a wall text. Artworks can’t be moved around without bureaucratic hurdles. In “real life,” the flow of traffic pushes you from one piece to the next, maybe before you’re ready to move on. And looking too closely often earns a stern “ahem!” from a nearby security guard — leaving brushstrokes and tiny details out of view.

Not so in this semi-apocalyptic, pandemic-inspired vision of the Met. Sure, there’s no New Yorker pontificating about how “his earlier work was just so much better” (though I’d make a case for this feature in a later version). And the program itself has limitations — it’s only available on your cellphone, and you can’t see the animation-enhanced paintings unless you have 5G (likely a result of the corporate partnership with Verizon). But in general, “The Met Unframed” may be one of a few digital “experiences” that actually adds more to the art than it takes away from it.

Throughout the pandemic, arts institutions have been forced to bolster their online presence. Some efforts have succeeded — usually when they resist trying to replicate the real-world experience. But many fall flat. A Zoom tour can feel like another work meeting. The much-hyped online viewing room often seems like nothing more than a glorified webpage. And many online tours are pixelated, akin to looking at art through foggy glasses.

In my own empty, virtually rendered Met, however, I was surprised to find that I actually spent more time with some of the art than I have in person.

“Fifty-Four Scenes From The Tale of Genji,” a pair of six-panel folding screens made in Edo period Japan, for example, is immediately striking for its immense detailing and scale. But if you aren’t familiar with the 11th-century Japanese epic and able to parse the dozens of scenes and figures, it’s difficult to find an entry point to begin to understand it.

In “The Met Unframed,” you’re tasked with finding details of various scenes — for example, three girls rolling a large snowball or Genji’s wife confronting his former mistress. It’s no art history course and would be great if it went even deeper — like Dutch public broadcasting service NTR did with Hieronymous Bosch’s “The Garden of Earthly Delights.” But a guided examination brings the art to life in a way that, even with a docent present, would be difficult with the work a few feet behind a glass wall.

Divided into four exhibition sections — Nature, Power, Home and Journey — the experience follows the “big art history” model popularized by the Met Breuer a few years ago. Works from across millennia and continents are brought together based on broad themes (see: exhibitions “Like Life: Sculpture, Color, and the Body (1300 — Now)” or “Unfinished: Thoughts Left Visible”).

Such a model invites the usual criticism: It can be so vague as to be meaningless; it reaches for connection where there is none. In this virtual world, too, many of the curatorial choices seem strange. Landscapes by Albert Bierstadt and Frederic Edwin Church somehow wind up in the “Power” section. Rembrandt van Rijn’s self-portrait is inexplicably featured in the “Journey” exhibit.

In other cases, the change brings welcome, unexpected contrasts. Typically, thousands of years of history and a few museum floors would separate say, “The Temple of Dendur” from a painting like “Rising Green” by abstract expressionist Lee Krasner. But here, only one “door” separates them. And you may find interpreting hieroglyphics a surprisingly fitting way to prepare to look at an abstract painting, where the nonrepresentational can seem like its own language, too.

The main and only objective in the “game” — admittedly a stretch to call it that — is to “unframe” artworks and “hang” them on your walls. As fun as it is to see a Van Gogh next to your bookcase or good old Hatshepsut sitting in your chair, it’s a bit of a one-trick pony and too made-for-sharing on social media.

But the “unframing” process encourages a kind of engagement that can make hard-to-crack works accessible to someone without an art background. For someone with it, it is simply a new way of looking. I can’t say I’ve ever really considered how much of each color Joan Mitchell used in a particular painting, but there are certainly less useful ways to look her work.

Surprisingly, the program really succeeds with the large works. Tasked with finding flying condors, among other details, in Frederic Church’s “The Heart of the Andes,” the work somehow feels larger, richer. Sure, a 5 1/2-by-10-foot work viewed on a 6-by-3-inch iPhone sounds like a disaster. But when sized down to your fingertips, what’s monumental in person becomes both more vast and more intimate.

Overall, “The Met Unframed” is an exercise in looking. It might — as was the case for me after I traversed Church’s landscape — make you more excited to see the art in person, to find the details you zoomed into on your phone. It might even make you homesick for that regal building on Fifth Avenue.

”The Met Unframed,” Free through Feb. 15 at themetunframed.com.