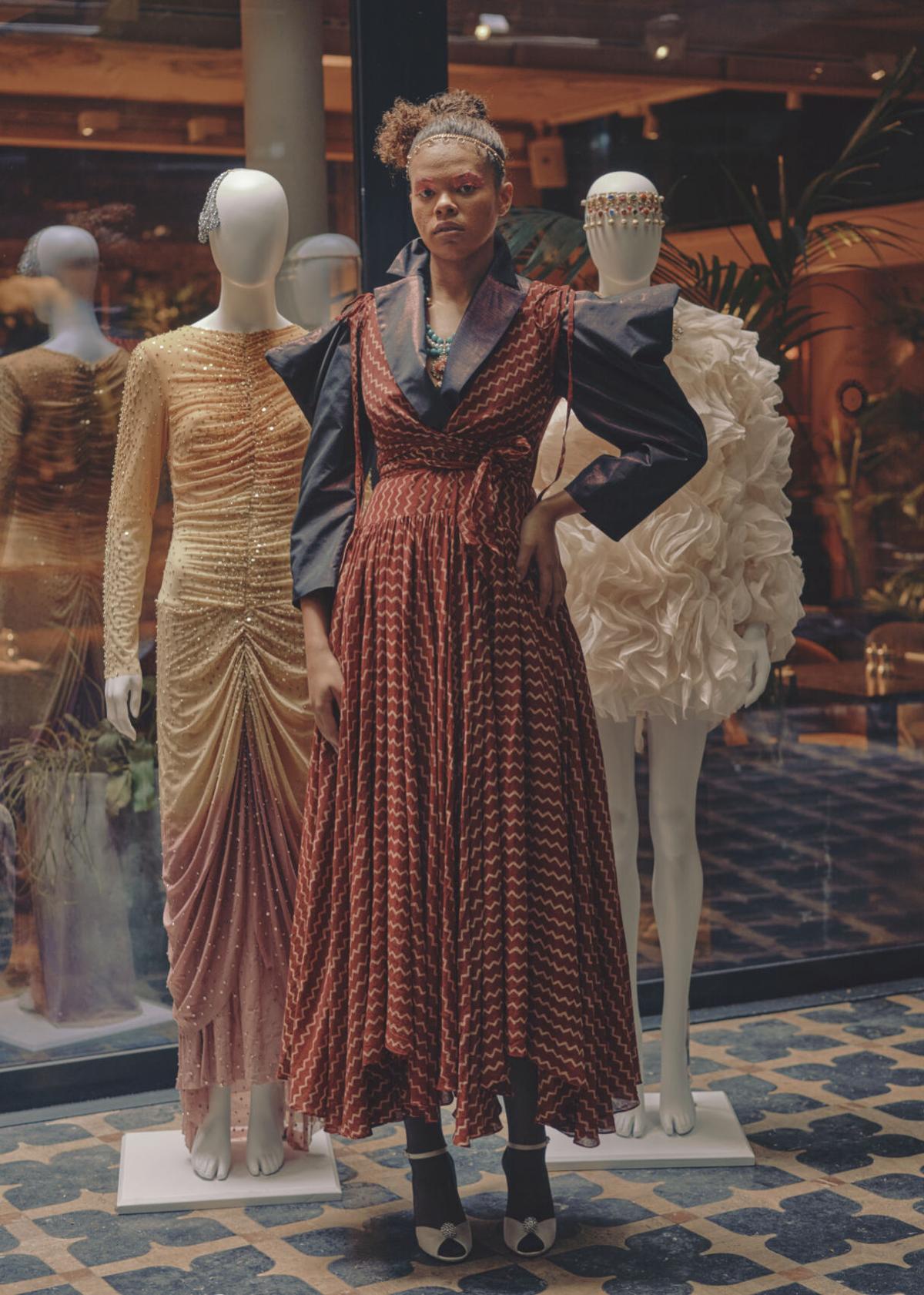 A model presents a look during the Osman spring 2021 presentation in London, Sept. 21, 2020. Most collections were shown online this season, but some designers in masks held in-person appointments, sharing stories of how lockdown had shaped their lives and businesses. — The New York Times Photo/Tom Jamieson 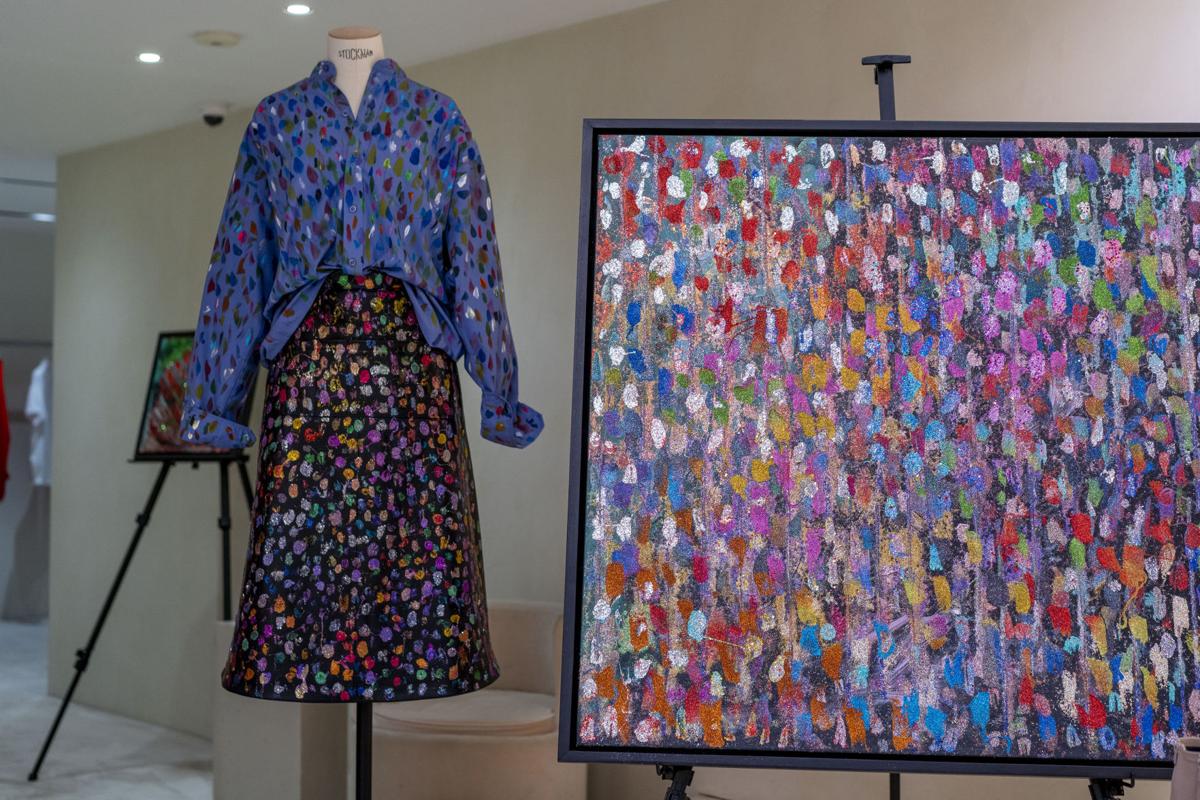 Designs at the Christopher Kane spring 2021 presentation in London, Sept. 21, 2020. The forced videofication of fashion shows have been unfurling with mixed results. — The New York Times Photo/Andrew Testa

A model presents a look during the Osman spring 2021 presentation in London, Sept. 21, 2020. Most collections were shown online this season, but some designers in masks held in-person appointments, sharing stories of how lockdown had shaped their lives and businesses. — The New York Times Photo/Tom Jamieson

Designs at the Christopher Kane spring 2021 presentation in London, Sept. 21, 2020. The forced videofication of fashion shows have been unfurling with mixed results. — The New York Times Photo/Andrew Testa

“An artist’s duty, as far as I am concerned, is to reflect the times.”

That was Nina Simone, in the vintage video shot that opened Gareth Pugh’s new multidisciplinary documentary released during London Fashion Week. Entitled “The Reconstruction,” it was an hourlong making-of video about the creation of a visual album — though not exactly the Beyoncé kind (even if it comes with a Spotify playlist). More the photographic kind.

One that comes with a fast-forward through the news events that got us to here: Australian bush fires, the Trump impeachment, COVID-19, George Floyd. And combines that with business confessional, craftsmanship, CGI burning vehicles, wastelands, random smokestacks and 13 garments enshrined in video shorts by Nick Knight that suggest, variously, the sphinx, eagles, aliens and warrior queens.

One that was unsettling, personal, chaotic and mostly unwearable. (All that imagery will later be digitized onto T-shirts made to order and sold to benefit Refuge, which works to combat domestic violence.) But not at all unwatchable. Because it was also one that made you think: Hell, yes. That’s exactly these times.

Down to the fact that many of us, grounded by pandemic restrictions, are experiencing it on TV. Or YouTube, anyway. As the Emmys, which took place over the weekend just as London Fashion Week got into full swing, argued, it’s the connective tissue of the moment; our shared unreal reality. In fashion, as in life.

Still, the forced videofication of these particular “shows” has been unfurling with mixed results.

What works on film and what works in the flesh are entirely different forms. But since it’s not that hard to imagine that at some point, if the current situation persists or the splintering of the fashion calendar really takes hold, videos will become part of the fabric of the regular fashion cycle, then coming to terms with what works onscreen is important. And it’s not simply a group of women, or men, strutting down a runway.

There’s nothing wrong with that, from an informational point of view — and oftentimes, as with Molly Goddard’s subversive rainbow fripperies and Victoria Beckham’s slouchy power plays, the collections look very good — but the videos lack texture, any sense of raw emotion and mess. (It’s also very easy, after about three minutes, to look away.)

And given that the anti-sweatpants movement that began in New York reached a new level of intensity, and creativity, in London, attaching the clothes to the visceral, stomach-churning weirdness of now — to characters, as opposed to the robotic strut of the catwalk model — is what makes for really good fashion TV.

As Pugh said in his film: “You can’t just go on as normal. You have to reinvent.”

See, for example, Erdem Moralioglu’s Emma Hamilton fantasy, filmed in Epping Forest and inspired by his lockdown reading (Susan Sontag’s “The Volcano Lover”), featuring the heroine forever walking through the woods toward her — lover? future? — in empire-waist florals, puff-sleeve, jet-beaded pink moire, and olive green suiting dripping in black grosgrain ribbon. She never quite arrives, but she sure looks dreamy getting there.

Or see the JW Anderson mini shopping-a-logue, featuring two friends (“The Crown’s” Emma Corrin, aka Princess Diana, and her stylist, Henry Lambert) trying on stuff in his store, a promise, dangling in an empty street, of what we once had and may one day have again. (The actual collection is apparently coming separately in a few days.)

That kind of naked intimacy is also what gave Christopher Kane’s short, “Home Alone,” its power. Inviting viewers into his atelier, he revealed — not clothes (at least not at first), but stacks and stacks of glue and glitter paintings made in his back garden during lockdown. There were piles of portraits segueing into giant canvases covering every bit of space in his studio. They came, he explains on-screen, from “fear of the unknown.” It made him not “want to create clothes,” he says. “I wanted to do something else.”

The scene in the showroom is like a glimpse into some sort of creative self-care spiral, but its final expression is also exhilarating. Those paintings become prints, which get digitized onto a handful of tops and skirts and dresses, not to mention Tyvek pieces that Kane customized by further hand-painting them with glitter. They’re collectibles: elegantly original, and with a very human back story.

Just as the back story is what gave Michael Halpern’s clip its infectious delight. Using eight frontline workers of all ages, shapes and colors as his models, Halpern let them loose in gold leopard print and sequined polka dots to boogie against a painted backdrop. Latifah, a driver on the London Underground, bounced around in a giant ball of pink and black ostrich feathers. Ghalia, an OB-GYN, kicked up her heels in a high-low ball gown. And Sarah, a cleaning lady in a hospital intensive care unit, wiggled and grooved in glittering red and black tweed.

“Right now I feel fantabulous,” chortled Odiri, a trains manager, glowing in silk pajamas and the kind of close-up you’d never get on a catwalk. “I feel pretty amazing.” Then she gave a little shimmy, and stepped off the screen.