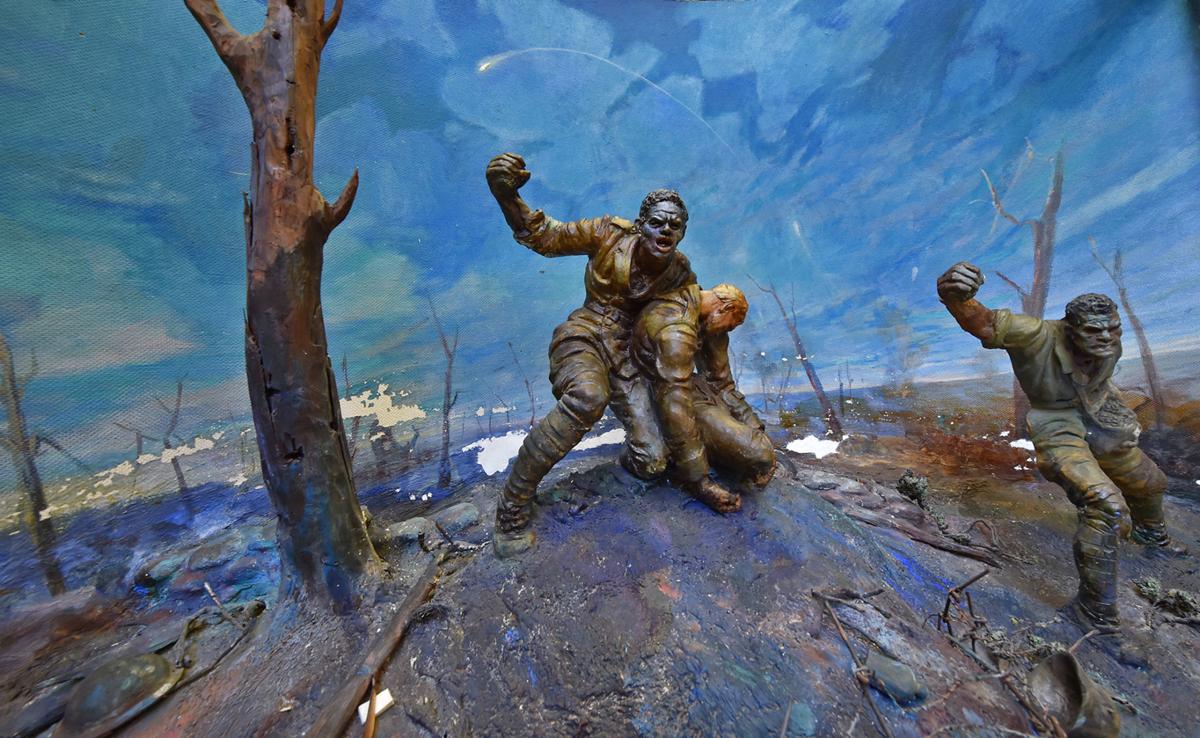 A 1940 diorama of the Harlem Hell Fighters during battle in World War I held at the Winterthur Museum in Winterthur, Delaware. Photograph by Butch Comegys / For WHYY 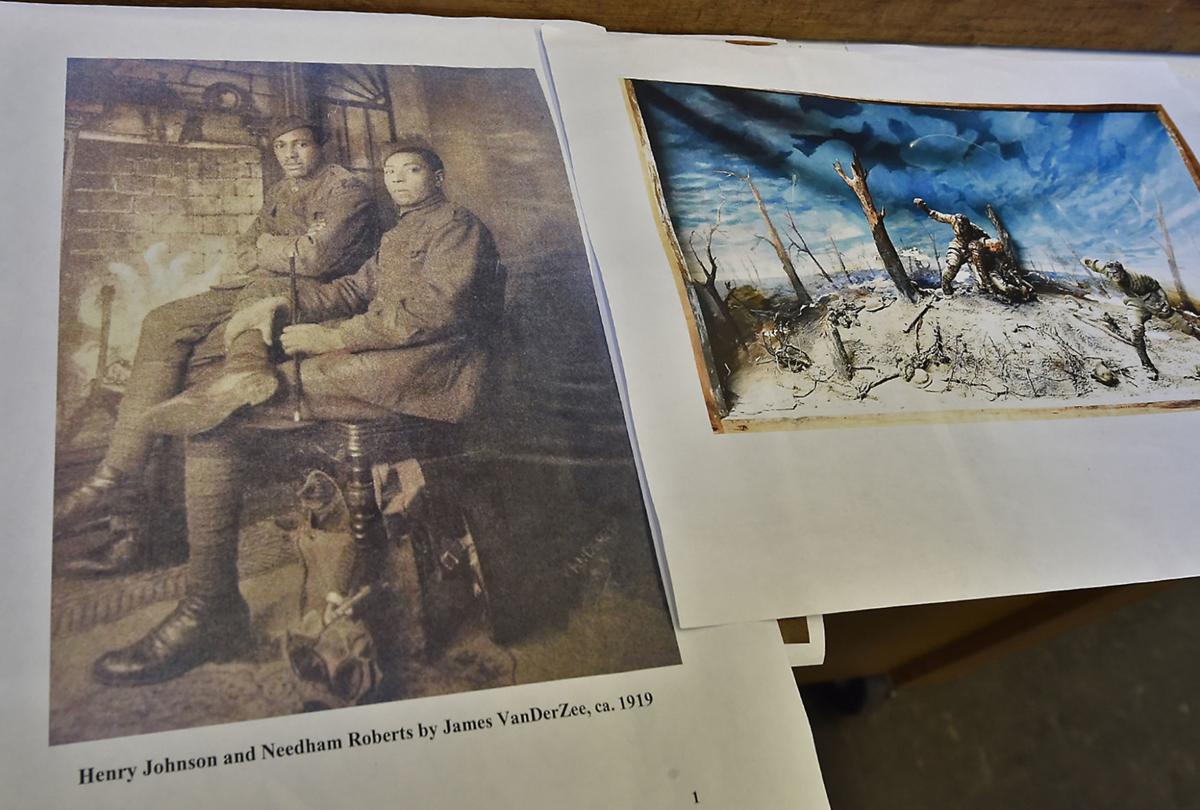 A photograph taken in 1919 of World War I Harlem Hell Fighters Henry Johnson and Needham Roberts by photographer James VanDerZee. Photograph by Butch Comegys / For WHYY 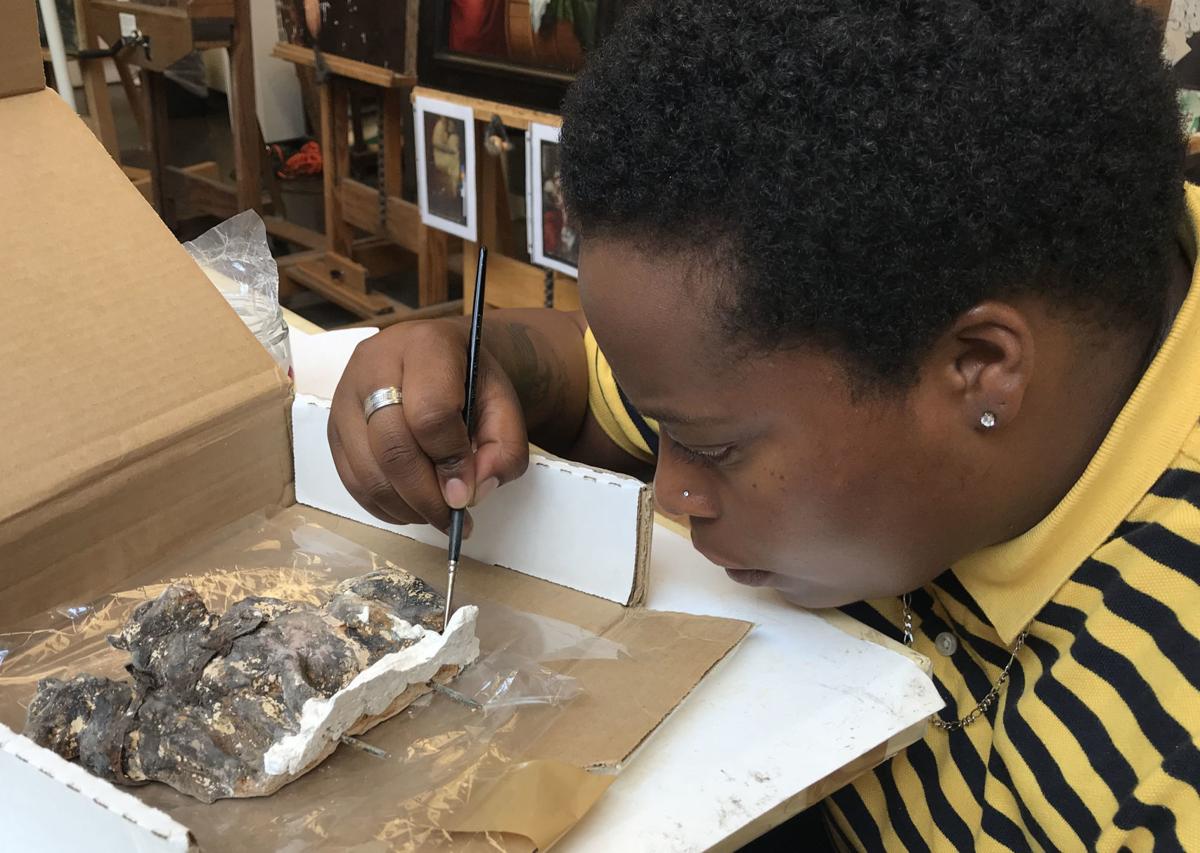 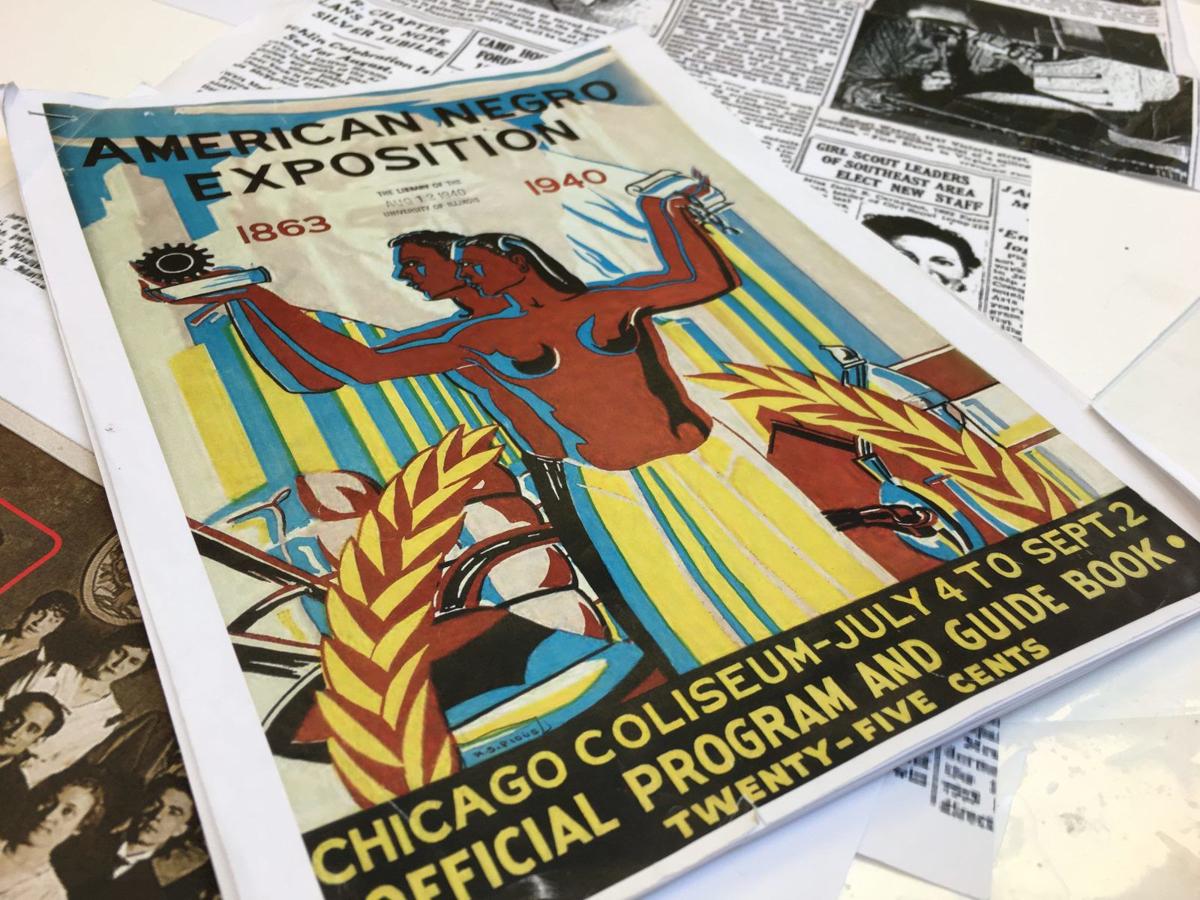 A copy of the original program from the 1940 American Negro Exposition in Chicago sits on a table at Winterthur Museum near Wilmington, Delaware. WHYY photo/Mark Eichmann 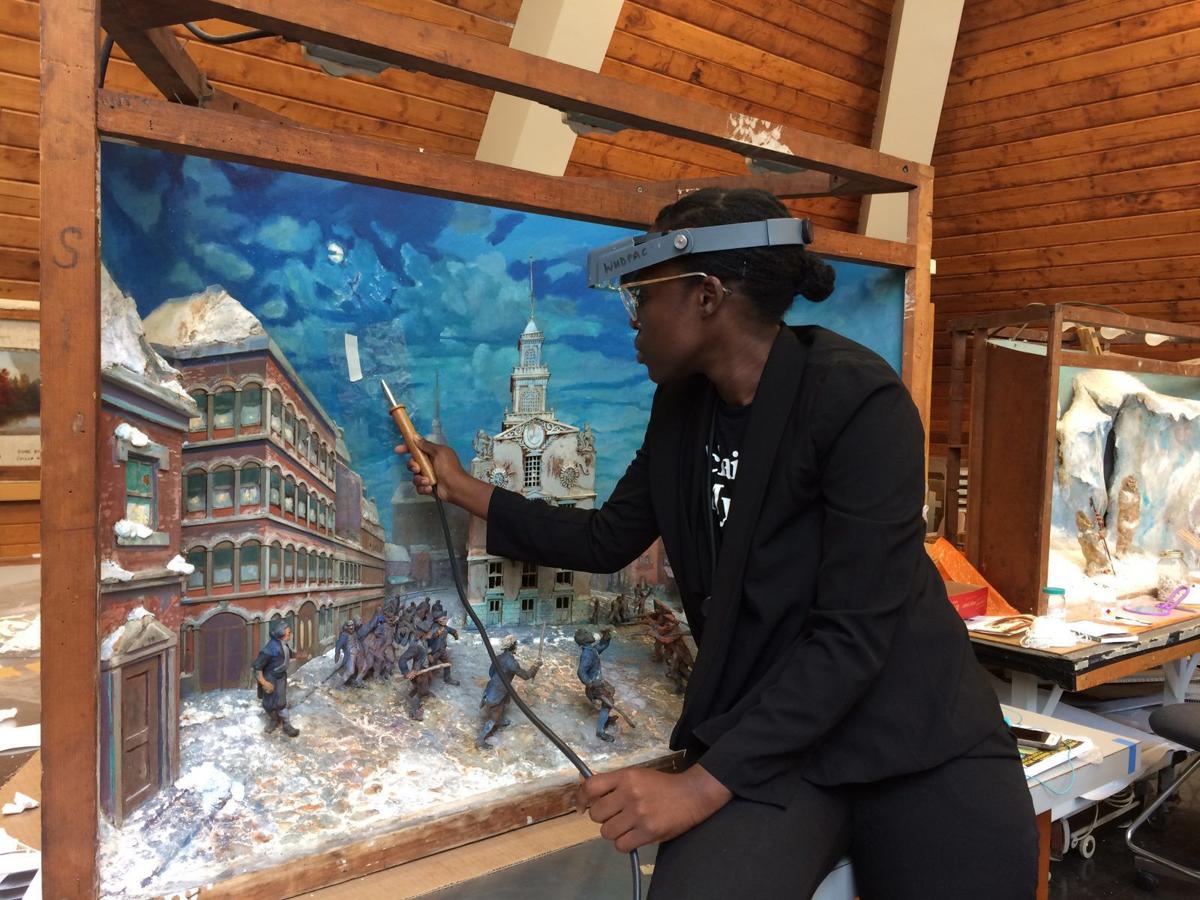 Kiera Hammond adjusts the sky in the backdrop of a diorama depicting the Boston Massacre death of Crispus Attucks. (courtesy Winterthur Museum)

A 1940 diorama of the Harlem Hell Fighters during battle in World War I held at the Winterthur Museum in Winterthur, Delaware. Photograph by Butch Comegys / For WHYY

A photograph taken in 1919 of World War I Harlem Hell Fighters Henry Johnson and Needham Roberts by photographer James VanDerZee. Photograph by Butch Comegys / For WHYY

A copy of the original program from the 1940 American Negro Exposition in Chicago sits on a table at Winterthur Museum near Wilmington, Delaware. WHYY photo/Mark Eichmann

Kiera Hammond adjusts the sky in the backdrop of a diorama depicting the Boston Massacre death of Crispus Attucks. (courtesy Winterthur Museum)

In the late 1800s and into the early 1900s there was a big trend of exhibitions and world’s fairs that celebrated the past and looked optimistically to the future. The first ever world’s fair, called the Centennial Exposition, took place in Philadelphia in 1876 and was attended by more than 8 million people from around the world.

Unfortunately, the world’s fair has a long history of racism. Early world’s fairs put people of color from around the world on display as part of exhibitions. Later world’s fairs relegated African American exhibitors to less desirable locations. At the Chicago World’s Fair in 1933, “African Americans were shoved in the back in little shanties and they couldn’t even come to the main part,” said Joyce Hill Stoner, director of preservation studies at Winterthur Museum in Delaware.

After years of work, the 1940 American Negro Exposition in Chicago finally put the spotlight on African American heroes, both the historic and of that time. The event featured 12-foot-long murals and 33 diorama boxes. The boxes were about three feet long with a curved backdrop. The creations depict scenes as far back as the construction of the Sphinx in Egypt some 4,500 years ago. They trace African American history from the arrival of the first enslaved people in Virginia in 1619 to the Reconstruction era following the Civil War.

The exhibits were on display for two months in 1940, and though attendance was low, it inspired educators in the region to improve their teaching of African American history.

“It was very successful in that Chicago teachers came in and said, ‘Oh, we are not doing well by teaching African American history,’” Stoner said. “One woman put together a whole curriculum based on the dioramas which circulated for quite some time.”

Most of what was created for these fairs was designed to be temporary. Even the Eiffel Tower, which was built for the 1889 Exposition Universelle in Paris, was supposed to be taken down 20 years after it was built. That was also true for the 33 dioramas that were on display in Chicago in 1940.

The dioramas were rescued from being destroyed by artist Charles Dawson, who helped organize the exposition. Following the exposition, Dawson transported 20 of the 33 dioramas by truck from Chicago to Tuskegee, Alabama where he was starting work as a teacher. “They were 60% destroyed when they got to Tuskegee,” Stoner said. “They went bumpety-bump on the truck and fell over, and little heads fell off and what not.”

For decades, the dioramas remained hidden in an Alabama basement. Now, meticulous restoration work is underway at Winterthur Museum. A diorama depicting Harlem Hellfighters fighting in France during World War I is getting spruced up and repaired by the museum’s conservation staff.

“I break the hearts of our visitors telling the story of this because the African American soldiers were not allowed to fight in the U.S. They had to dig the trenches which were very important for WWI warfare,” Stoner said. “The French were short a battalion so they asked, and they got the 369th Infantry Division from New York, who became known as the Harlem Hellfighters. Germany nicknamed them because they were so hard to fight.”

Kiera Hammond, who attended Howard University, worked on the diorama depicting the Boston Massacre and the death of Crispus Attucks, a Black man believed to be the first American killed in the Revolutionary War. “I was able to repair some of the skyline there just by trying to color match what pigments are currently there, to make sure it blends in cohesively with the background,” she said.

For Hammond, bringing these dioramas back to life is also breathing new life into the stories they tell.

“It’s this buried or hidden treasure because it’s been forgotten, even though it’s very prominent and monumental within the community,” Hammond said. “Having the opportunity to work on these projects, it’s just been beyond, beyond rewarding, like very breathtaking.”

For intern Chanise Epps, who studied at Texas Southern University, uncovering these pieces that have been out of sight for decades serves as a metaphor for stories of African American history that’s been similarly hidden away. “I think the importance of conservation is to awaken the narrative, because there’s so many narratives out here,” she said. “We kind of get pushed on this mainstream, so we don’t see all the other things that are going around.”

While Epps is now exploring a career as an artist in Brooklyn following her work in Delaware, Hammond is now interning at the Smithsonian National Museum of African Art, specializing in art preservation.

And that’s the larger goal of the restoration effort: encouraging African American art students to study the chemistry and art history needed to work in conservation.

Only 1 to 2% of conservators are African American, Stoner said. “So by these displays, by our tours and by the four students we’re accepting each June to work on the dioramas, we’re getting more African American undergrads excited, we hope, about the rather complicated background you need as a conservator.”

This summer, interns are expected to work on a diorama depicting the construction of the Sphinx in Egypt. They’ll visit the 3,000 year sphinx at the University of Pennsylvania as part of that effort.

Once they’re finished, the dioramas will be on display at the Legacy Museum in Alabama, which focuses on the history and consequences of slavery and racism in America.