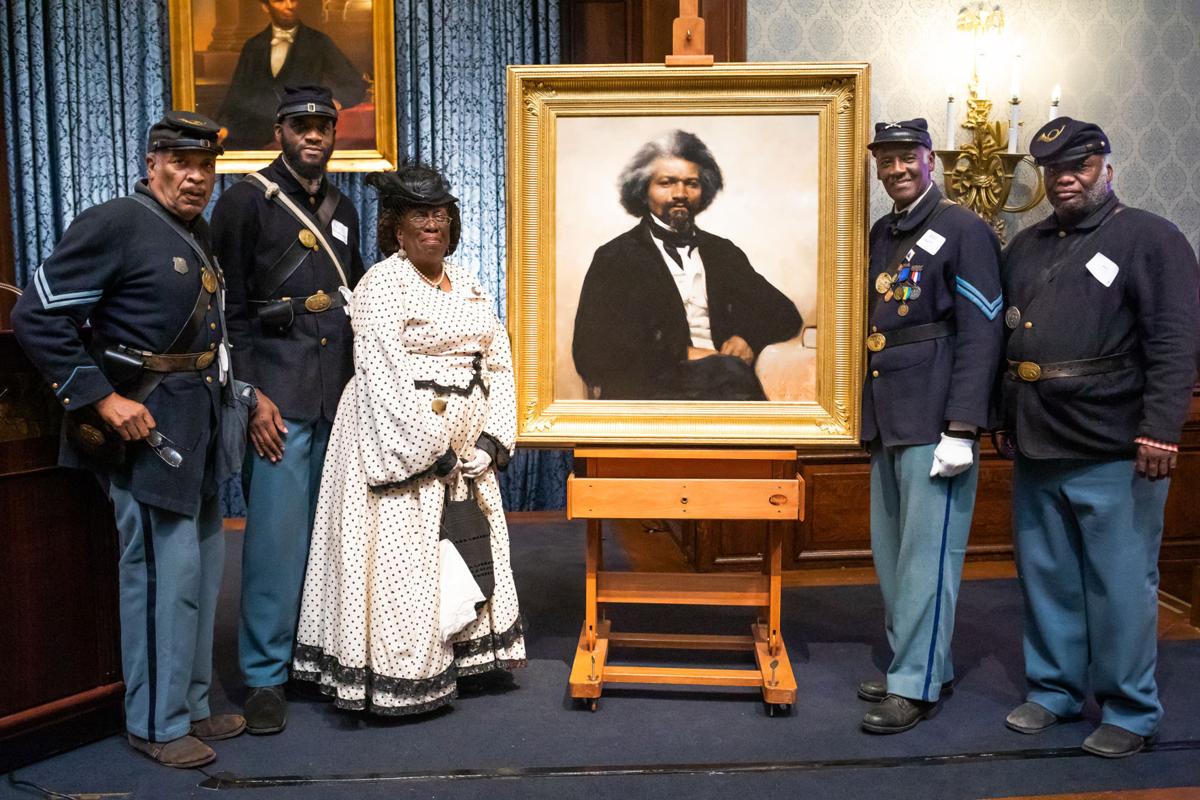 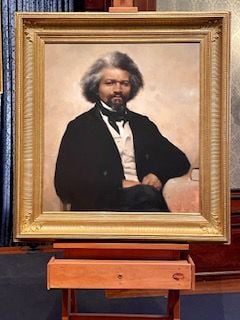 It is widely considered that the great abolitionist Frederick Douglass was the most photographed American of the 19th century, reportedly having more photographs taken than even Abraham Lincoln, our 16th president of the United States. This week in a ceremony at the Union League of Philadelphia, Douglass’ likeness was honored once again with a new portrait, the first of its kind in the 21st century. Produced by renowned artist Jordon Sokol, the painting pays tribute to Douglass’ work during a time when the country fought for its survival against the confederacy. After a year of searching for an existing portrait, Sokol was awarded the commission in September of last year. He will return to the building on October 13th for a special library hour to discuss his work and process on the project.

In 1863, Douglass and the Union League (just months after its founding) recruited troops for the first training of African American soldiers at Camp William Penn in Cheltenham, Pennsylvania for the Union Army which needed more men to fight in the Civil War. This included a rally in the streets of Philadelphia on July 6, 1963.

“The League and Douglass have a very close and important connection in history”, says John J. Meko Jr., executive director of the Union League Legacy Foundation. “They also became allies in the first great civil rights movement of the 1860s and 70s resulting in the 15th Amendment’s passage giving African American men the right to vote”.

After escaping the bondage of slavery in Maryland to Philadelphia and becoming a successful newspaper publisher and author, Douglass made it his duty to take several dozen photos in a conscious effort of portraying black people in a positive light and with humanity. Sokol’s goal was to exude this all in his work on the canvas. “I was honored yet nervous in being selected”, says Sokol. “But I also put a lot of pressure on myself to get it right and express his nobility through the painting”. Sokol worked with an executive committee to settle on two photos of Douglass. “It was important to find images close to his age that mirrored the time of his affiliation with the league”.

When asked what members and visitors should take from the painting of Douglass once it is available for public viewing from October 8th through 15th, Meko elaborated. “More than anything else, it is about shared values which Douglass believed and still the League, that the constitution is the best hope we have for liberty as imperfect as it is. Our message is not to throw that away”.

The painting of Douglass was made a reality with donations of over $100,000 from various Union League members and other donors, and is a part of over 40 pieces of art acquired by the organization within the past ten years. The Union League Legacy Foundation will also hold an annual open house of the Union League on February 12th to which the portrait will be on display. Those interested in attending the public dates can visit www.ULLegacy.org