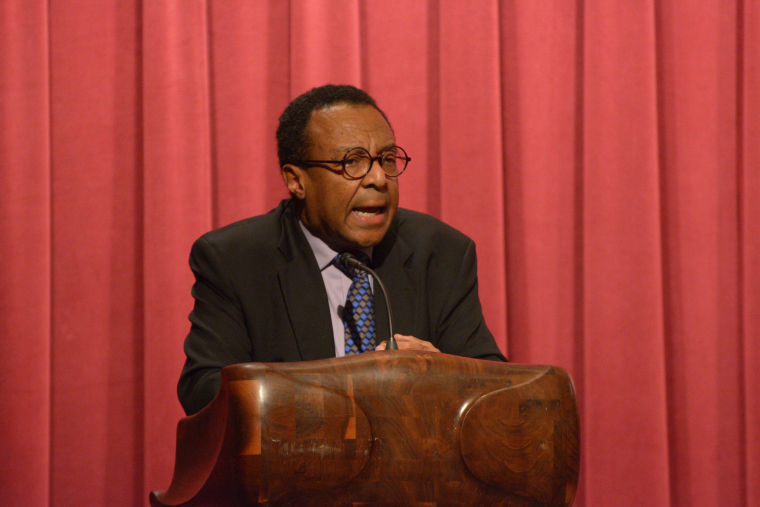 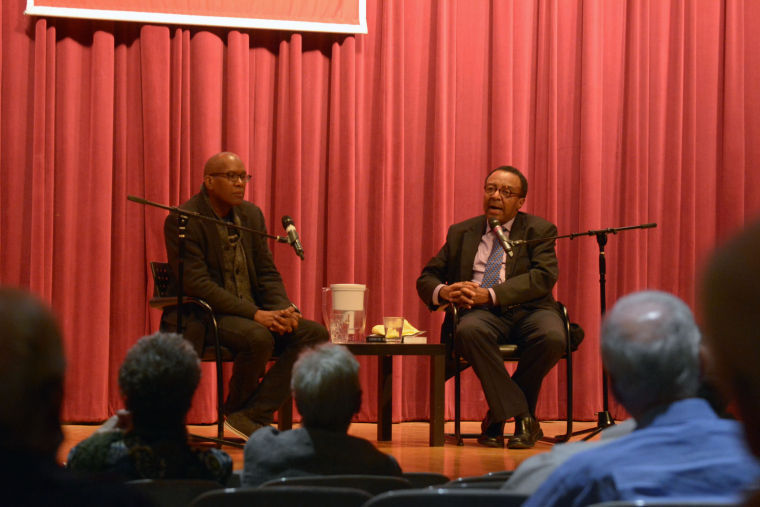 Published to coincide with the 30th anniversary of Pulitzer Prize-winning Chicago Tribune columnist Clarence Page’s first Chicago Tribune column, “Culture Worrier: Selected Columns 1984-2014: Reflections on Race, Politics, and Social Change” (Bolden, $17) is the first and only collection of columns from one of the nation’s most highly regarded journalists.

Page first joined the Chicago Tribune in 1969 and became a columnist 15 years later, in 1984. In 1989, he was awarded the Pulitzer Prize for Commentary. His column was first syndicated nationally in 1987, and today his writing is featured in more than 150 publications, including locally in The Philadelphia Tribune.

On Thursday, Page appeared at the Free Library of Philadelphia where he was joined by Darryl Pinckney, author of “Blackballed: The Black Vote and Democracy,” to discuss politics, pop culture, race and other topics covered in Page’s book. The columnist tackled the matter of how identity as an African American has informed the politics of his column.

“It’s interesting to me that I and every other Black columnist I know get occasional complaints from conservatives that we write about race ‘all the time,’” reflected Page. “I don’t write about race all the time, but the very fact that so many people seem to see race in my columns tell me just how intensely feelings about race, among other tribal considerations, inform everybody’s politics — whether they want to acknowledge it publicly or not.

“As an African-American who grew up in the last days of Jim Crow segregation and the hard-won victories of the civil rights revolution, I write about racial issues more often than most white columnists do. But when I write about climate change, mortgage defaults, student loans, the obesity epidemic, the future of public education, are those racial issues? Maybe not on the surface, but my experience informs my awareness of how differently those issues play out in white communities compared to communities of color.

“Similarly, growing up in a Black, low-income community but attending integrated schools helps me to understand that you don’t have to be Black to be poor in America. In fact, white poor outnumber Black and Hispanic poor, even though a lower percentage of whites are in poverty. Yet you’d hardly know that from the coverage that poverty usually receives in daily news reports.

“As a result, I can’t mention that fact on a radio program, for example, without hearing from some white person who wants to know my source for that, as if they can’t believe it. My source is the Census Bureau. But growing up Black in America has made me more sensitive to the value of facts against a flood of rumors and the importance of empathizing with disadvantaged people, regardless of their race, ethnicity, gender or other background.”

Not limited to just the print medium, Page is a regular MSNBC contributor and has hosted several documentaries on the Public Broadcasting Service. Page often appears as a political analyst on “Hardball with Chris Matthews,” and Matthews contributed the forward to the 445-page collection.

Page admitted that keeping up with the media changes over three decades requires personal tenacity.

“It is rather unsettling to have your world shaken up as much as the world of media has been rattled in recent years,” said Page. “I thought, for example, that I would never squeeze my bulging imagination into the tight little girdle of Twitter. But, counseled by my millennial-generation son, I love it now. It’s not only fun but an easy way to direct people to my column to get a longer read. Of course, my growing appreciation for Twitter means that my son and his crowd are doing what they did when us boomers took over Facebook. They’re moving onto something newer that I don’t understand — like Instagram.

“But, what I find reassuring is that the fundamentals of journalism remain in place. Whatever the medium of conveyance might be, people still want reliable news and opinions. They’ve only got so much time to spend with their media, so we in the media still have to compete for their valuable time and loyalty. Even though the competition grows increasingly fierce, I find it’s invigorating. It keeps me young — maybe young enough to figure out Instagram.”