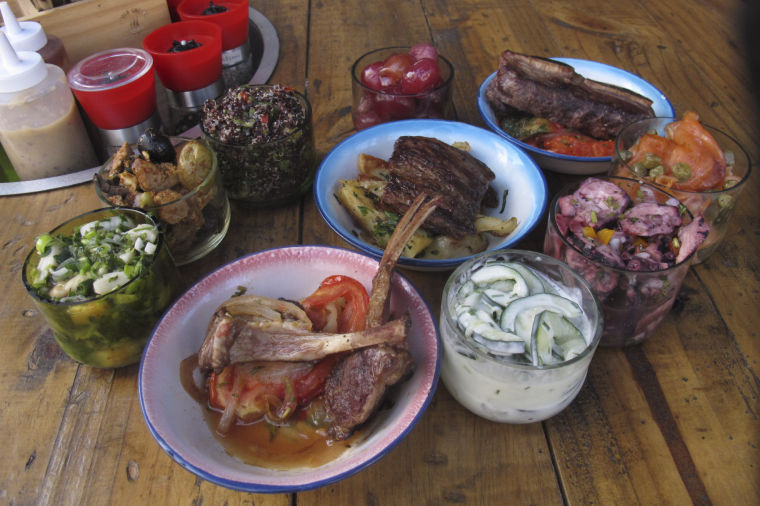 Patagonian lamb on top of a tomato and onion sauté, ribs, octopus and salmon ceviches, quinoa, sweet onions and other entrees served in tapas-like portions at the Carlo Cocina Mercado Gourmet, in Santiago, Chile. 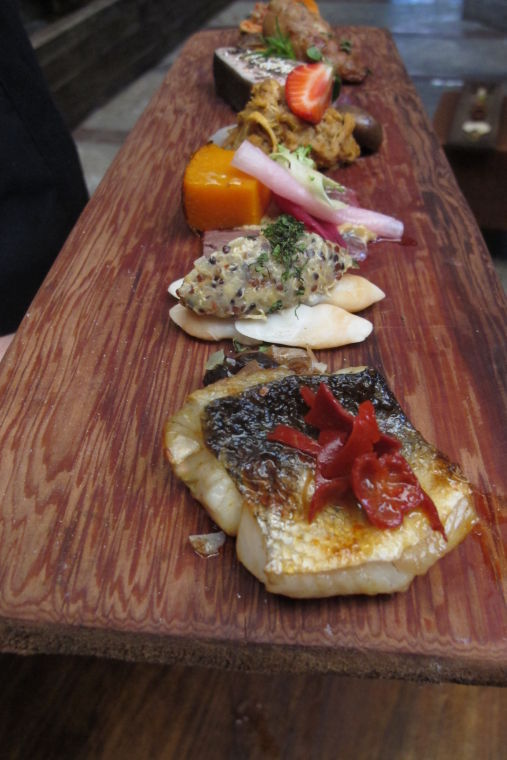 Servings of conger, rabbit and horse, at the Peumayen restaurant, cooked by chef Juan Manuel Pena, in Santiago. 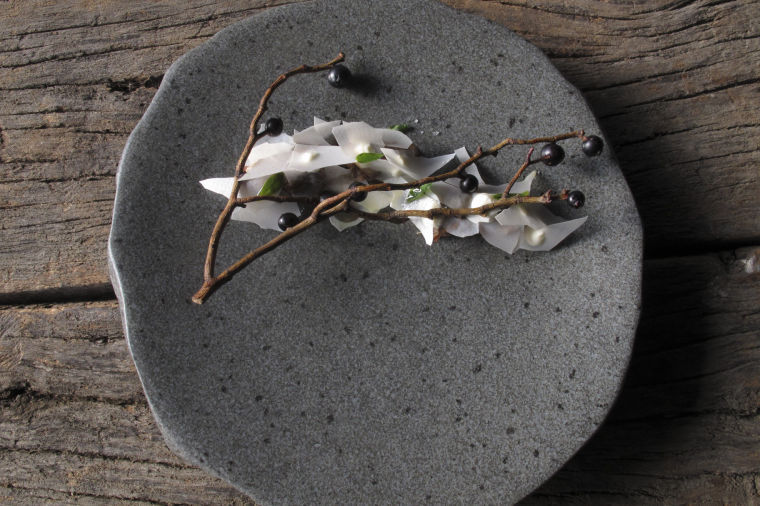 Organic veal, cooked in its own milk, garnished with an aromatic branch and a dark-red elderberry called ‘sauco’ on a table at the Borago restaurant in Santiago. — AP Photos/Luis Andres Henao

Patagonian lamb on top of a tomato and onion sauté, ribs, octopus and salmon ceviches, quinoa, sweet onions and other entrees served in tapas-like portions at the Carlo Cocina Mercado Gourmet, in Santiago, Chile.

Servings of conger, rabbit and horse, at the Peumayen restaurant, cooked by chef Juan Manuel Pena, in Santiago.

Organic veal, cooked in its own milk, garnished with an aromatic branch and a dark-red elderberry called ‘sauco’ on a table at the Borago restaurant in Santiago. — AP Photos/Luis Andres Henao

SANTIAGO, Chile — Chile is famous around the world for its wine, but until recently its food wasn’t known beyond its long borders. Now, several chefs in the South American country’s capital are revolutionizing Chilean cuisine one bite at a time.

While some chefs are reawakening the ancestral dishes of the indigenous Mapuche and Rapa Nui, others are reimagining typical fare by experimenting with local ingredients, including edible flowers from places such as Patagonia and the snow-peaks of the Andes mountains.

Foodies from around the world are increasingly traveling to Santiago to sample a half-dozen high-end restaurants. The city of seven million has traditionally been known more for street food like steak sandwiches and hot dogs smeared with creamed avocado than fine dining. Typical Chilean foods are generally not spicy or prepared in exotic ways, and include empanadas, shellfish soups and corn casseroles.

“Chilean food was never as important as it is now,” said chef Rodolfo Guzman, whose Borago restaurant has been named in the Latin American section of the coveted San Pellegrino’s World’s Best Restaurant list. “We’ve developed in our kitchens all these foods that the Mapuche had been eating for hundreds of years.”

Guzman opened Borago in 2007 after working in Spain’s Basque country at Mugaritz, among the world’s top-ranked restaurants. Since then, several sous chefs who worked at Borago have opened their own places.

“Chile finally stopped looking outside and began looking at itself,” said Chilean food journalist Daniel Greve. “It’s a revolution of looking at your roots, at the indigenous, in what’s interesting about our mom’s and grandma’s cooking and wanting to recreate a landscape, an entire county.”

At Peumayen restaurant, chef Juan Manuel Pena serves bite-size breads arranged geographically from Chile’s north to south. They include “poe” a plantain-based cake from the Rapa Nui, the inhabitants of Easter Island, the remote South Pacific territory Chile annexed in 1888.

The exotic breads are followed by appetizers, including hen with an onion puree, mushrooms and strawberries, horse meat, and bass with a seaweed salad in white wine.

“A few years back we were still arguing among chefs about what makes a Chilean flavor? What is Chilean gastronomy?” said Pena, an Argentine who’s lived in Chile for the past decade. “But it’s been settled now. We took a step forward.”

At Carlo Cocina Mercado Gourmet, that has meant reinventing how traditional staples are served, such as arranging bits of ceviche or a little “tomatican” — a sautee of tomato, corn and onion — in individual portions. The gourmet market-style restaurant also sells local products such as bottled water from Patagonia and olives from the Atacama desert.

“For a long time, Chile showed itself in terms of products” like wine and olive oil, said Carlo Von Muhlenbrock, a Chilean chef who owns the restaurant and hosts a radio and TV show about local cuisine. “But Chile is now taking risks.”

Dishes at Borago include grilled conger eel served alongside a puree cooked over a sea rock and dipped inside a brown, soy-like tasting broth from the roots of “cochayuyo,” a Chilean seaweed. A traditional stew known as a “chupe,” which usually uses seafood, in this case is made with forest mushrooms and decorated with thin leaves of crunchy wild plants that feel like insect wings to the bite.

“I didn’t know anything about Chilean cuisine, but I liked Borago so much that I ate there two nights in a row,” said Brandon Hensinger, a 33-year-old foodie from Philadelphia who has a goal to try all of Latin America’s best restaurants.

Latin American cuisine has gained respect globally thanks to culinary maestros like Peru’s Gaston Acurio, who has opened more than a dozen restaurants worldwide, including the Astrid & Gaston franchise. Now, Chile is starting to appear on the world’s gastronomical radar.

The ingredients in the evolving dishes are as wide-ranging as Chile’s geography. They include fresh olives grown in some of the world’s driest deserts in the far north to “merquen,” a blend of smoked red chilies and coriander seeds native to the southern region of Araucania that the Mapuche claim as their ancestral territory.

While the Santiago-based chefs are successfully raising the profile of Chilean cuisine outside the country, the government needs to promote their efforts at home as well, said Maria Canabal, a Paris-based food writer.

“It’s an isolated phenomenon because most of the country’s restaurants are not haute cuisine, or don’t offer indigenous products,” said Canabal. “I just hope (the phenomenon) inspires others to do the same.” — (AP)