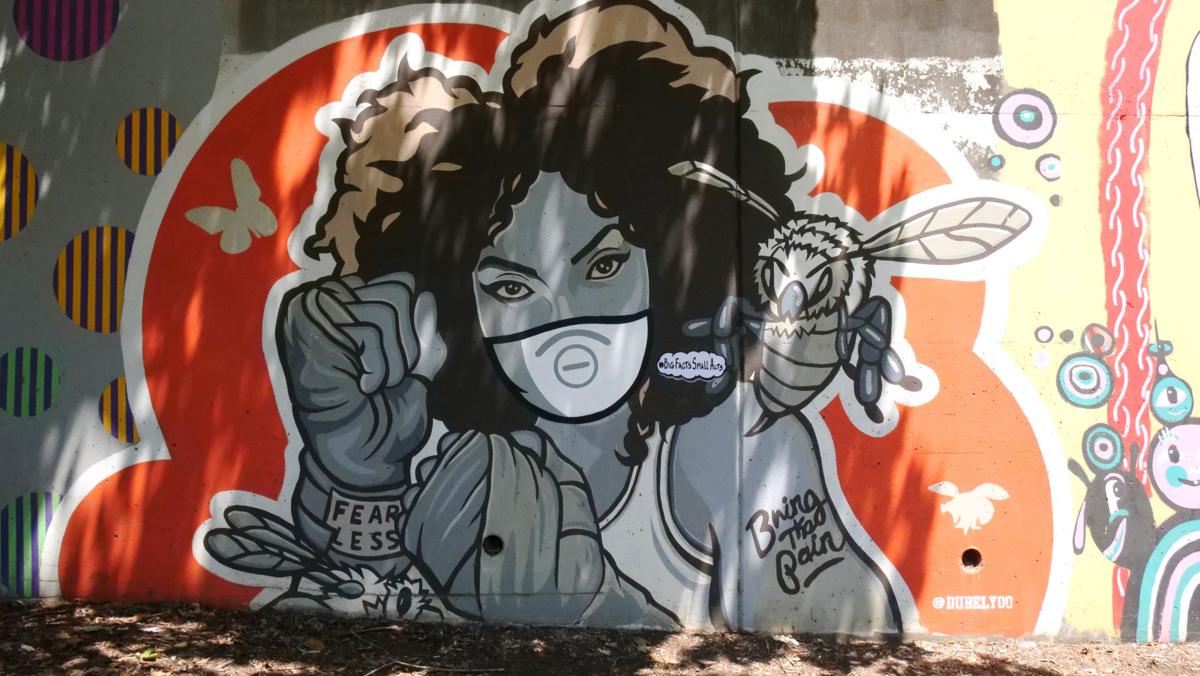 Artist Dubelyoo covered his mural of a woman boxer with a vinyl mask in Atlanta’s Cabbagetown neighborhood as a visual reminder to wear a mask to fight Covid-19. 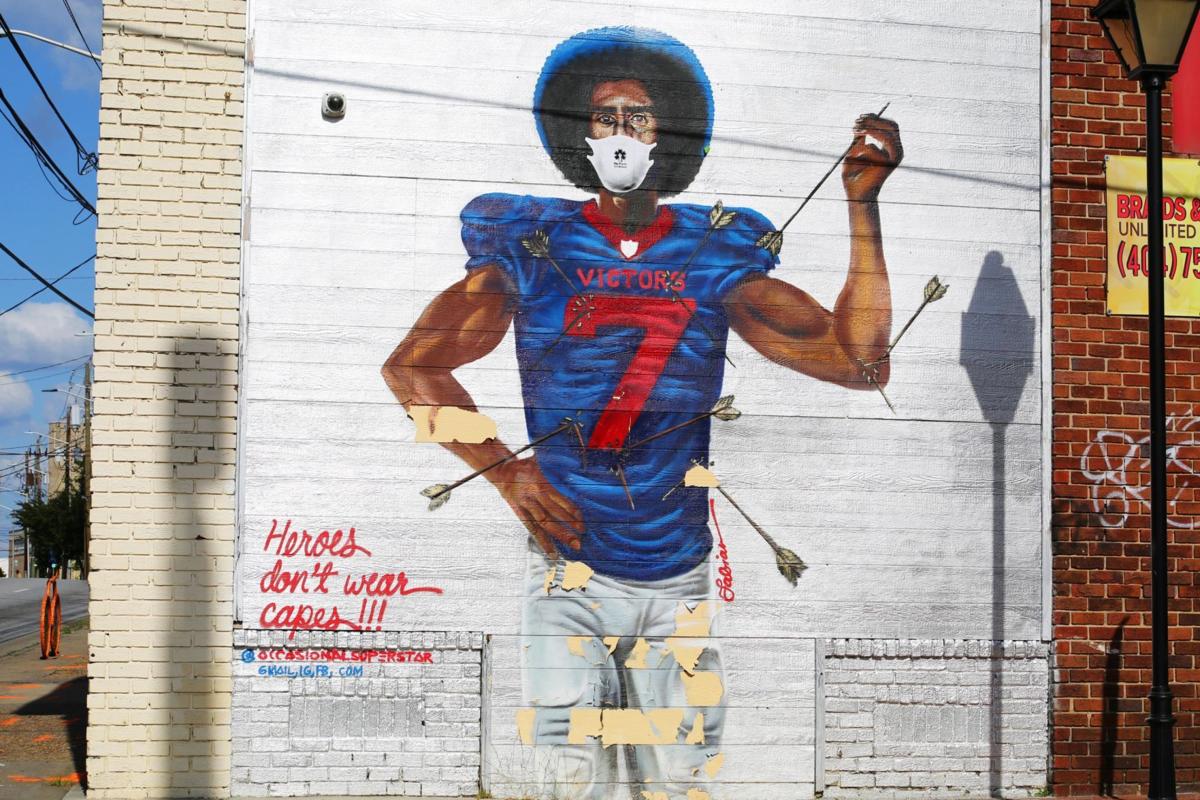 The mural of Colin Kaepernick in Atlanta’s West End now has a face mask as part of the grassroots campaign to encourage mask wearing. 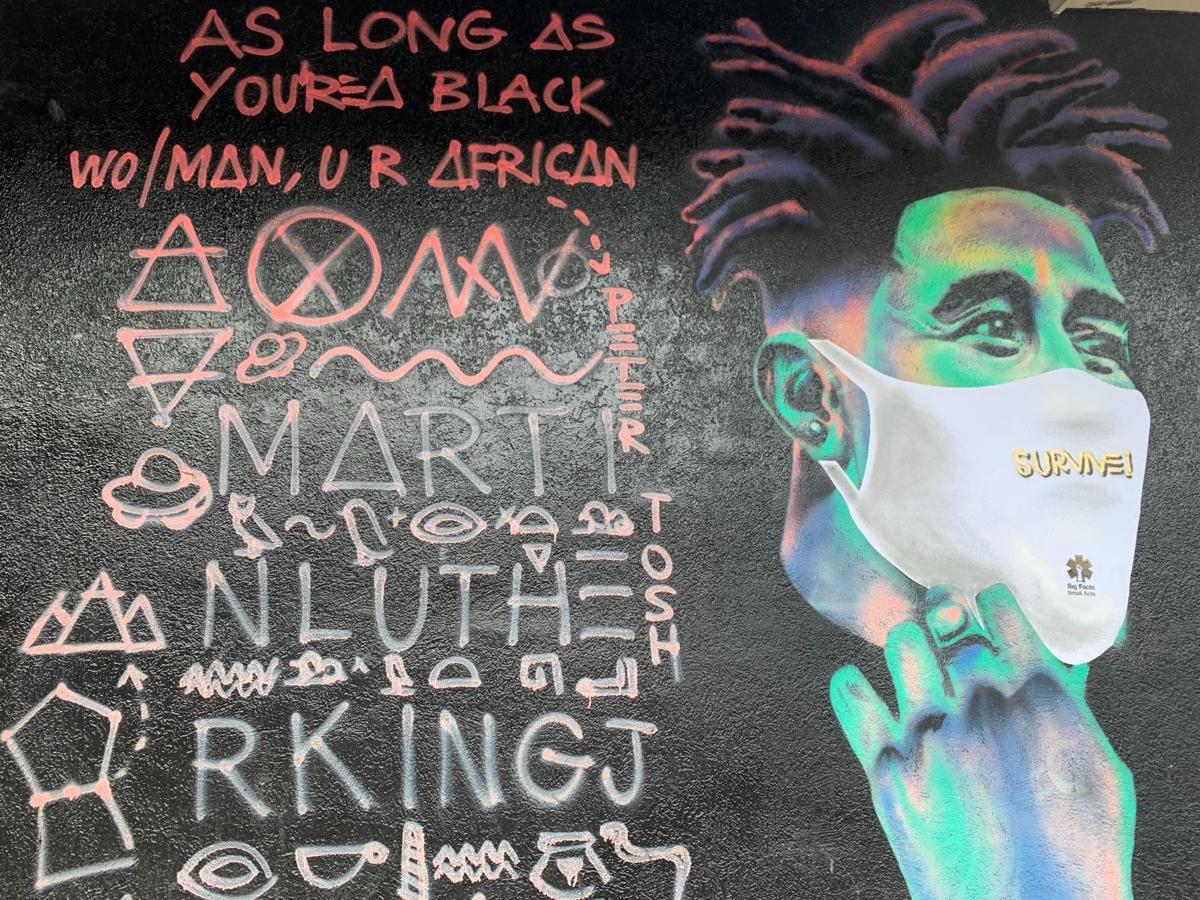 A street mural of Bob Marley by Atlanta-based artist Fabian Williams is covered with a vinyl mask as part of the Covid-19 public awareness campaign Big Facts Small Acts. 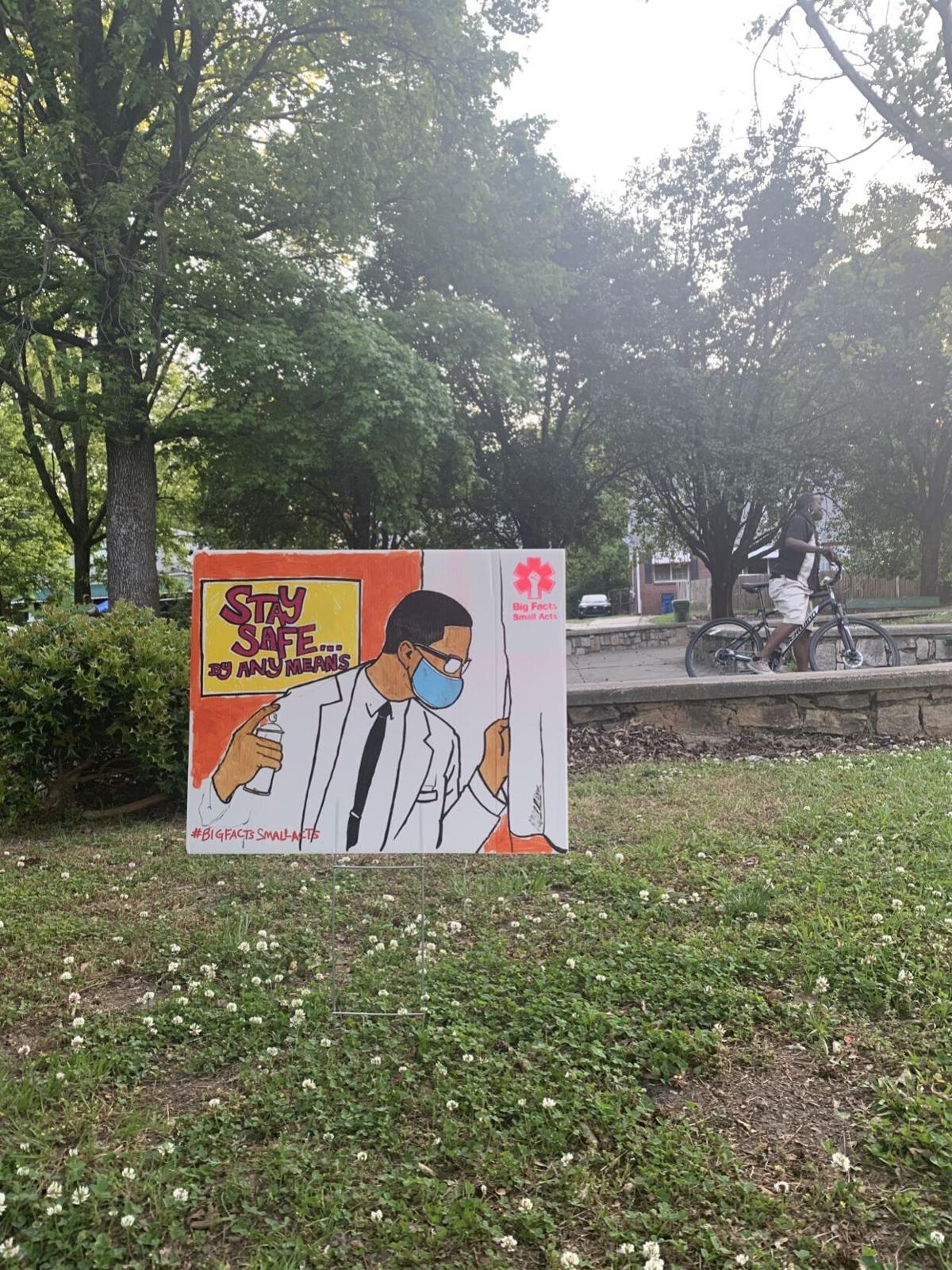 Artist Dubelyoo covered his mural of a woman boxer with a vinyl mask in Atlanta’s Cabbagetown neighborhood as a visual reminder to wear a mask to fight Covid-19.

The mural of Colin Kaepernick in Atlanta’s West End now has a face mask as part of the grassroots campaign to encourage mask wearing.

A street mural of Bob Marley by Atlanta-based artist Fabian Williams is covered with a vinyl mask as part of the Covid-19 public awareness campaign Big Facts Small Acts.

Colorful street murals have adorned an intersection in Atlanta’s West End neighborhood for years. One depicts an ethereal vision of Martin Luther King Jr. floating on his side, the other of former NFL quarterback and civil rights activist Colin Kaepernick plucking arrows from his football jersey.

In June, the two men’s faces took on a whole new look to respond to the coronavirus epidemic.

Face masks made of huge white vinyl sheets now seamlessly cover the mouths and noses on the murals. On King’s mask is written “We Gone be Alright,” a reference to the Kendrick Lamar song.

The artist who created the murals covered them up. Fabian Williams said he wanted a strong visual reminder that people should wear masks to protect them from a viral scourge that has disproportionately impacted Black and Brown Americans both in Atlanta and nationwide.

“I don’t feel like we’re in a time of ambiguity,” Williams told CNN.

“We’re not seeing visual cues of a pandemic. In the movies, when pandemics come, there’s like chaos, soldiers with guns, breathing apparatuses and hazmat suits, bodies lying on the ground. This is not that,” said Williams.

“Without seeing a lot of people suffering, you tend to forget that this is actually something that’s going on and killing people left and right.”

An idea and a stimulus check

The murals are a part of a grassroots public service campaign. It’s the brainchild of Atlanta journalist, writer and filmmaker Sherri Daye Scott who felt it was her duty to do something about the spreading virus. Weeks into the pandemic, she kept seeing people without masks especially at the grocery store in her Southwest Atlanta neighborhood. Then Scott’s neighbor got COVID-19 and a friend lost three relatives to the pandemic.

“The message that we’re hoping to get across is that it can be as simple as wearing a mask, until there’s a vaccine,” Scott told CNN.

“We want this to be a daily reminder that’s not judgmental or preachy.”

She thought using art would be a good way to communicate her point, particularly for the Black community.

So, Scott took the stimulus check many Americans received from the government after the pandemic hit and went to work. She called up award-winning muralist friends, like Williams and Dwayne “Dubelyoo” Wright, the marketing firm Chemistry Agency, and friends who work in science and technology. They volunteered hundreds of hours to create the physical and digital campaign Big Facts Small Acts which launched in May.

The campaign also designed and gave away hundreds of masks.

Scott spoke about the history of mistrust between Black Americans and medical science beginning with forced medical experiments on slaves to the Tuskegee syphilis experiments.

The campaign looked at zip codes with the highest rates of COVID-19, and made sure messages were placed in those neighborhoods.

“Because we very much wanted to target people who are hourly workers, essential workers — people who we knew had to be out and about — the idea of having a mural, a larger than life reminder, in commonly traffic places just made sense, Scott told CNN.

‘I have a dream, that you STAY HOME’

Starting small, they painted dozens of yard signs reminding people to social distance and wear masks and placed them at bus stations, parks and busy intersections.

Some had Martin Luther King Jr.’s image with a cartoon pop up reading, “I have a dream, that you STAY HOME.” Another depicts Malcolm X as a doctor who says, “Stay safe ... by any means.’” Other signs feature the faces of friends and neighbors saying “Cover our community,” and “Stay six feet back.”

“Some were fun like ‘Don’t let COVID catch you unmasked in these streets,’” Scott said.

When they expanded from yard signs to murals with masks, Williams went to work measuring, cutting out large sheets of vinyl, applying adhesive, then shading to “give it shadow and depth.” So much so, it looks like the mural was created with a mask.

“On the Bob Marley mural, I wrote ‘Survive’ because I wanted to have a call to action. That really spoke to what we’re supposed to do when our lives are under duress like, ‘survive!’ you’ll get through this,” said Williams.

“In advertising we’re taught to have direct messaging — ‘survive,’ ‘live,’ ‘we’re going to be alright.’” It’s important for us to put the messaging in that tells people what to do.”

Scott and Williams chose vinyl and not paint for a specific reason.

“The idea is, this is not permanent. If we do the work now, if we mask up, there will come a time when we can remove these masks,” said Scott.

“We’re not going to be walking around looking like ninjas for the next 30 years,” said Williams.

It’s too soon to know the impact of their work, but Scott and Williams say many more people in the neighborhood are wearing masks than when they first started. And hundreds of people have joined “Big Facts Small Acts” Instagram and Facebook campaigns.

The campaign has applied for a grant from Emory University to help determine the most effective messaging so far and where to spread it around the city, mostly in Black and Brown communities.

They hope other artists, or even regular folks around the country will take up the cause and mask their murals or make their own yard signs to help save lives.

“We’re going to get through it,” said Williams. “You know Black people in this country, we’ve been through a lot but we’re still here and we’re going to continue to flourish. This is just a bump in the road.”