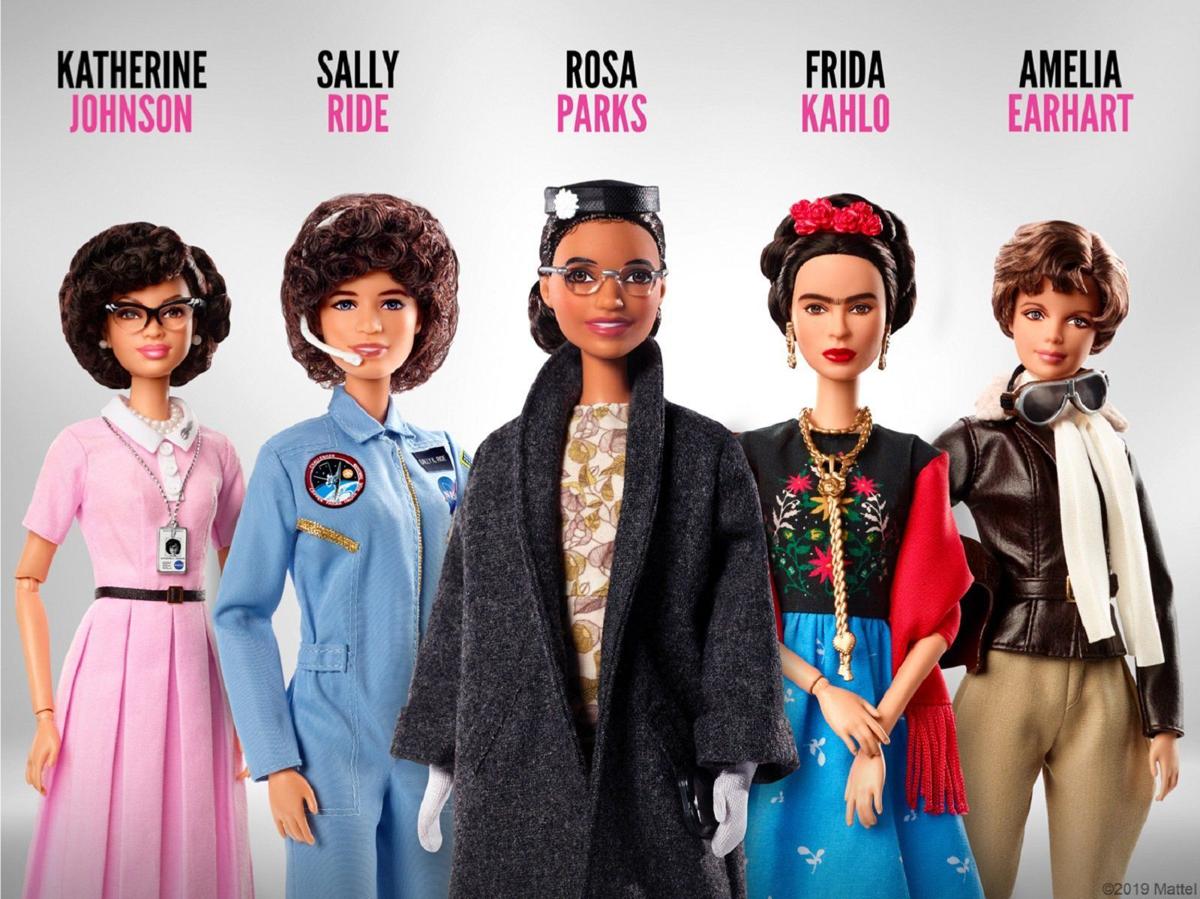 “Women’s Equality Day celebrates the hard-won achievement of women’s suffrage and pays tribute to the trailblazers who paved the way for future generations,” a Mattel spokesperson said. — PHOTO: Mattel Inc.

“Barbie: Dreaming of a Female Future,” depicting a view of a modern Barbie’s house is displayed at the Birmingham Museum of Art. — PHOTO: Mark Almond

Rosa Parks, an activist known as the “Mother of the Modern Civil Rights Movement,” has been immortalized as a Barbie doll. — PHOTO: Mattel Inc.

“Women’s Equality Day celebrates the hard-won achievement of women’s suffrage and pays tribute to the trailblazers who paved the way for future generations,” a Mattel spokesperson said. — PHOTO: Mattel Inc.

“Barbie: Dreaming of a Female Future,” depicting a view of a modern Barbie’s house is displayed at the Birmingham Museum of Art. — PHOTO: Mark Almond

Rosa Parks, an activist known as the “Mother of the Modern Civil Rights Movement,” has been immortalized as a Barbie doll. — PHOTO: Mattel Inc.

These are the questions curators at the Birmingham Museum of Art say they want visitors to ponder as they explore the new exhibit “Barbie: Dreaming of a Female Future.”

The exhibition, which opened on Aug. 10 and will be open through January 2020, takes a critical look at Barbie as toy-manufacturing company Mattel marks the 60th anniversary of the iconic doll.

While Barbie has sparked the imaginations of children around the world for six decades, the doll has also promoted narrow beauty standards and body ideals that are unattainable for most women, particularly for girls and women of color. The exhibit is the brainchild of Hallie Ringle, the BMA’s Hugh Paul Curator of Contemporary Art.

“Many of us have a very complicated relationship with Barbie,” Ringle said. “While she is very much a figure promoting white womanhood and white standards of beauty, she was also the only doll — for many years, at least — that was telling girls to aspire to different careers; telling girls they didn’t have to have a Ken in their life, that their existence didn’t have to rely on a man or a baby, and that they could build their own spaces.”

For the exhibit, Ringle wanted to create a literal space for visitors to explore as they examined their relationship to Barbie. The first Barbie Dreamhouse launched in 1962, and for this exhibit Ringle called on interior designers from the Chattanooga, Tennessee-based Studio BOCA to create a life-sized Barbie Dreamhouse in the BMA’s Arrington Gallery that guests can walk through and view contemporary art inspired by the doll.

Ringle said one of her inspirations for the exhibit was the work of Atlanta, Georgia-based photographic artist Sheila Pree Bright, whose pieces hang over the sofa in Barbie’s BMA living room. These works are from Bright’s 2003 collection “Plastic Bodies,” which explores the complex relationship women of color have with white beauty standards by combining images of real women’s faces and bodies with those of Barbie dolls.

“I started looking at how multiethnic women perceived themselves when it came to beauty and looking at African-American women and how they viewed themselves and their bodies based on the Western concepts and narrative,” Bright explained.

Though Bright didn’t play with Barbie dolls herself as a child, thinking of American beauty standards led her to thinking of Mattel’s mainstay.

“Barbie is a cultural icon and the most popular doll in America. Even to this day, it’s the number-one fashion doll,” Bright said. “So, I started looking at how this applied to society’s views of beauty and women, especially women of color.”

Bright said she believes that in popular American culture, the essence of natural beauty is replaced by fantasy, a fantasy of which Barbie is both a product and promotion.

“In the media, we fabricate the illusion of the perfect body or beauty, even with the Barbie doll, and it’s rooted in Western concepts,” Bright said. “As a society, we get caught up in this illusion. I think that, as a metaphor, Barbie has become human and we have become plastic.”

Bright pointed out that even as voluptuous shapes and sizes have become more celebrated in mainstream media, this too has an element of artificiality. The American Society of Plastic Surgeons estimates that buttock augmentation surgery increased by 252 percent between the years 2000 and 2015. And it’s not lost on Bright that rapper Nicki Minaj calls herself “Black Barbie.”

Barbie has had Black friends since the release of Christie in 1968. The first diverse dolls named “Barbie” were released in 1980, and Barbie’s Dolls of the World collection hit shelves in 1981. It wasn’t until 2016 that Mattel introduced three new Barbie body types: curvy, petite, and tall. According to the company’s website, the new body types were meant to “reflect the world girls see today.” The launch landed Barbie on the cover of Time magazine.

This year, Mattel debuted a doll with a prosthetic leg and another that comes with a wheelchair as part of the 2019 Barbie Fashionista line, which aims to offer youngsters more diverse representations of beauty.

“When you look at the images on their Instagram, you still see that Western narrative,” Bright said. “They’re not promoting those body types. It’s the same old narrative and a few different ethnic dolls as Barbie’s friends. So, what has changed?”

The BMA’s “Barbie: Dreaming of a Female Future” was created to be an interactive exhibit. There are no “Please Do Not Touch” signs in Barbie’s Dreamhouse. Visitors are encouraged to make themselves at home. Guests can lounge on the sofa in Barbie’s living room or go to the sitting room and watch artist Lauren Kelley’s thought-provoking video vignettes. There are iPads visitors can use to scroll through to learn more about the exhibit.

Barbie’s library is stocked with feminist literature by the likes of Margaret Atwood, Naomi Wolf, and Betty Friedan. There are children’s books, too, such as “Malala’s Magic Pencil” by Malala Yousafzai. Ringle has said her dream is to find people reading to their children in the exhibit. Kids can also have a make-believe meal in Barbie’s dining room and even write a letter to Barbie at her computer.

Visitors can check their makeup or hair at Barbie’s vanity in her dressing room, which features glowing furniture by Kim Markel. Then they can strike a pose in front of the Grace Hartigan painting hanging in Barbie’s foyer or the rhinestone-studded pink wallpaper by the New York design studio Flat Vernacular.

Artists from Flat Vernacular also created the eye-catching work that hangs just outside Barbie’s Dreamhouse. “If the Shoe Fits” reimagines a mariner’s quilt with hundreds of Barbie shoes to honor and highlight women’s labor in the American South.

Studio BOCA, the architectural and interior design company tasked with building Barbie’s Dreamhouse for the exhibit, is run by sisters Kate Taylor Boehm and Kirby Caldwell.

“We just wanted to honor the process of female imagination,” Boehm said. “So, we figured rather than trying to convey a particular message, our approach would be just to incorporate the work of all female designers.”

Boehm and Caldwell played with Barbie dolls as girls, and their memories of Barbie are mostly fond ones.

“She was just this strong female lead. When we were growing up in the 1980s, almost all movies had these male leads, and the female characters were all secondary,” Boehm said. “Barbie was a place where we could write our own story and have the female be the hero.”

Through Barbie, these two sisters also began to imagine themselves as business owners, a dream they would eventually make come true.

“Barbie planted a lot of seeds in our heads of what it meant to be a career woman and have a vision and have drive,” Caldwell said.

Boehm, however, does have a memory of one day looking at her thighs when she was only 7 and thinking they were too big: “I guess that may have had something to do with seeing Barbie’s unrealistic thighs for so many years, but I never had a moment where I was like, ‘Oh I wish I looked like Barbie.’ It wasn’t really about that for me.”

It was about imagination.

“She was this blank canvas to which we could apply our imagination,” Boehm said. “Once we got a taste of being career women, even if it was only in our imaginations, there was no going back.”

The title of the exhibit is a nod to the phrase “The future is female,” which was first used in the 1970s but gained mainstream popularity in the past few years as it’s shown up on social media, T-shirts, lapel pins, and onesies.

“A female future to me means control over our bodies and future and lives,” Ringle said, adding that she hopes the exhibit, filled with works by female artists and designers, will help visitors dream of that day. She also hopes men who view the exhibit will recognize the role and importance of womanhood in their own lives.

In 2018, the Barbie brand launched The Dream Gap Project, a global initiative aimed at giving girls the resources and role models they need to dream big and make those dreams come true.

Rosa Parks and Sally Ride get their very own Barbie dolls

Children everywhere are going to get the chance to have two historical female role models as part of their play sets.