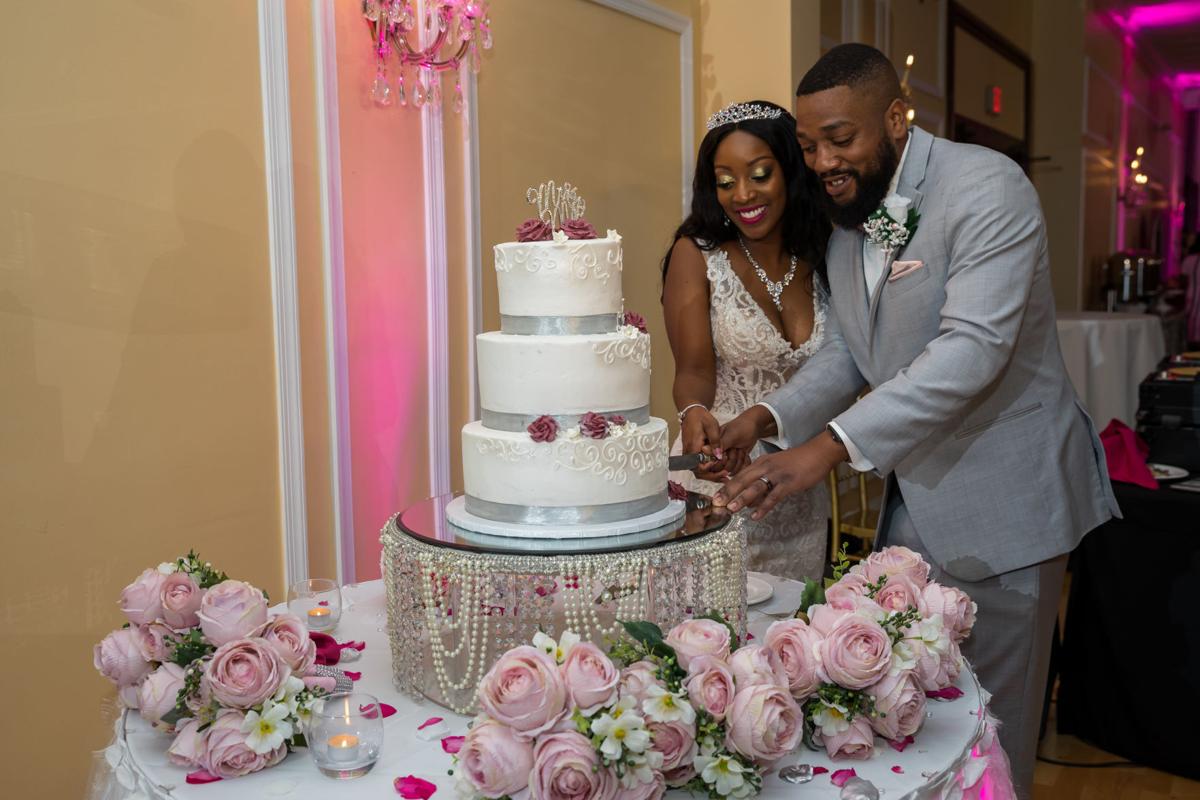 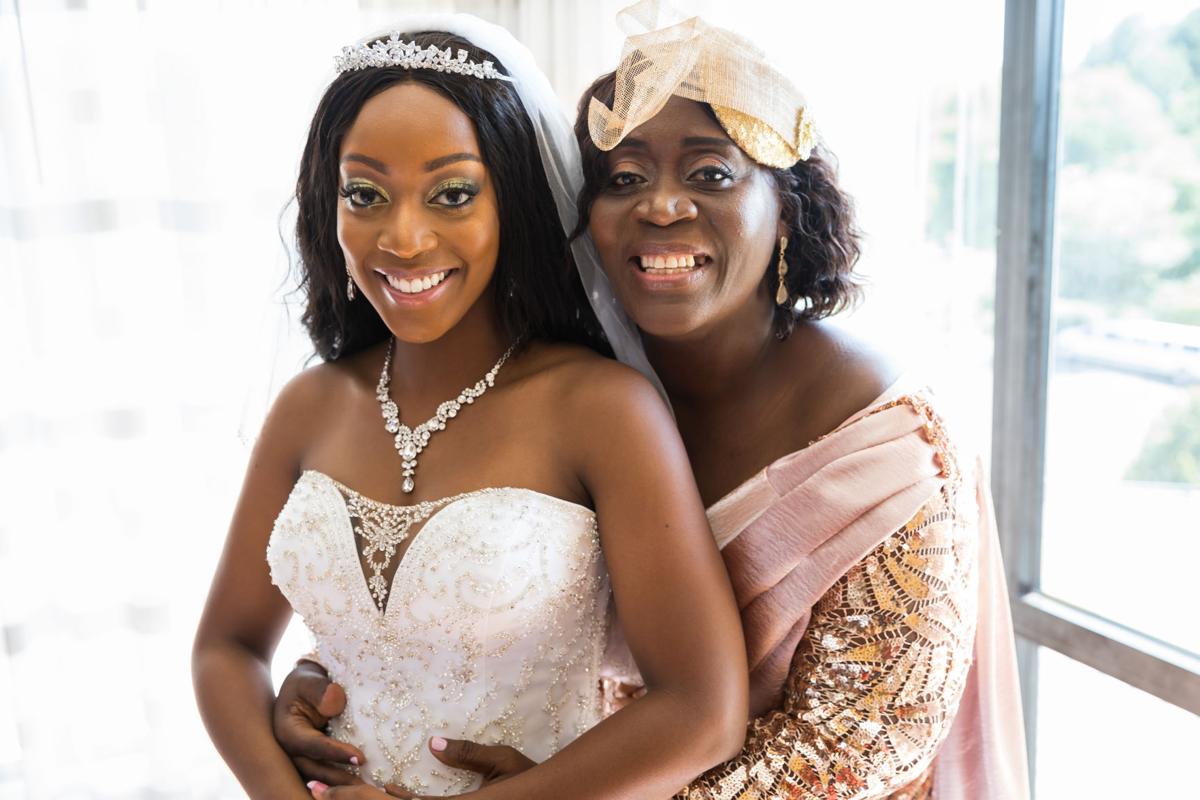 1. Vanessa Tyler and Reginald Cleveland were married Sept. 7, 2019, and their wedding colors were rose quartz and gray.

3. Vanessa Tyler with her bridesmaids and flower girl.

4. Groom Reginald Cleveland and his groomsmen. 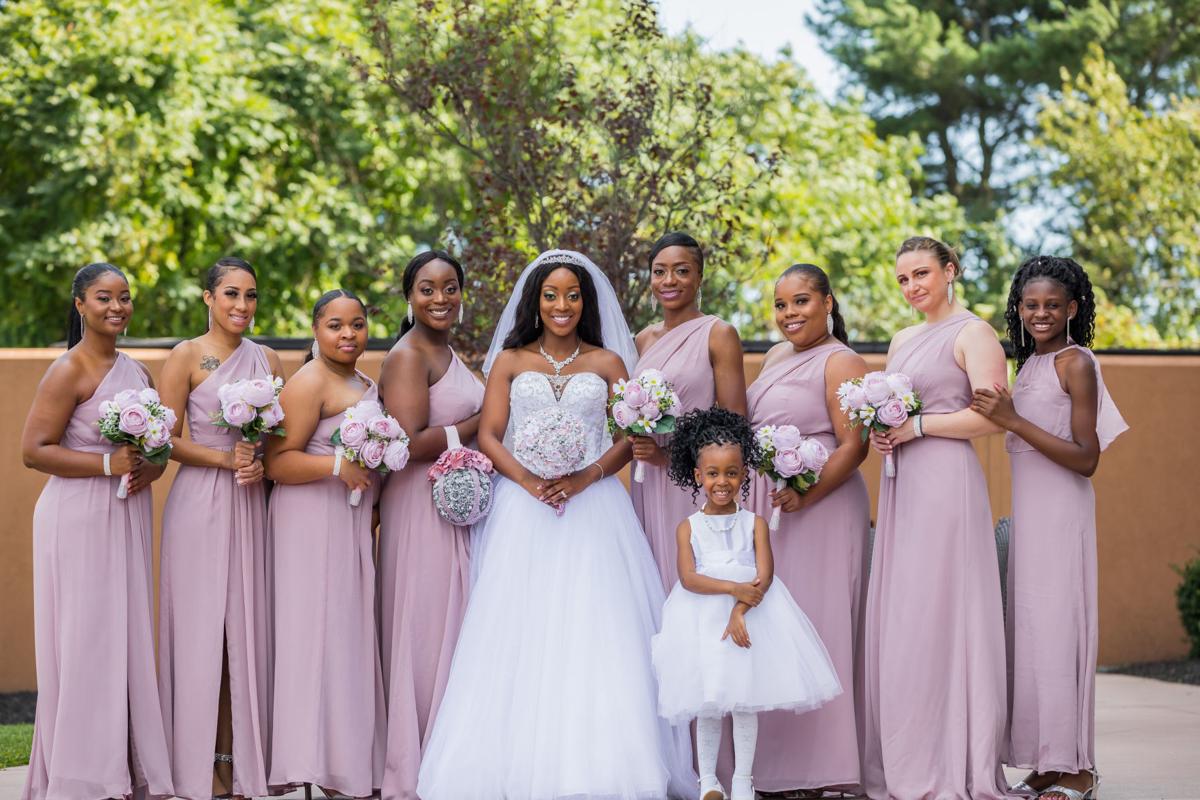 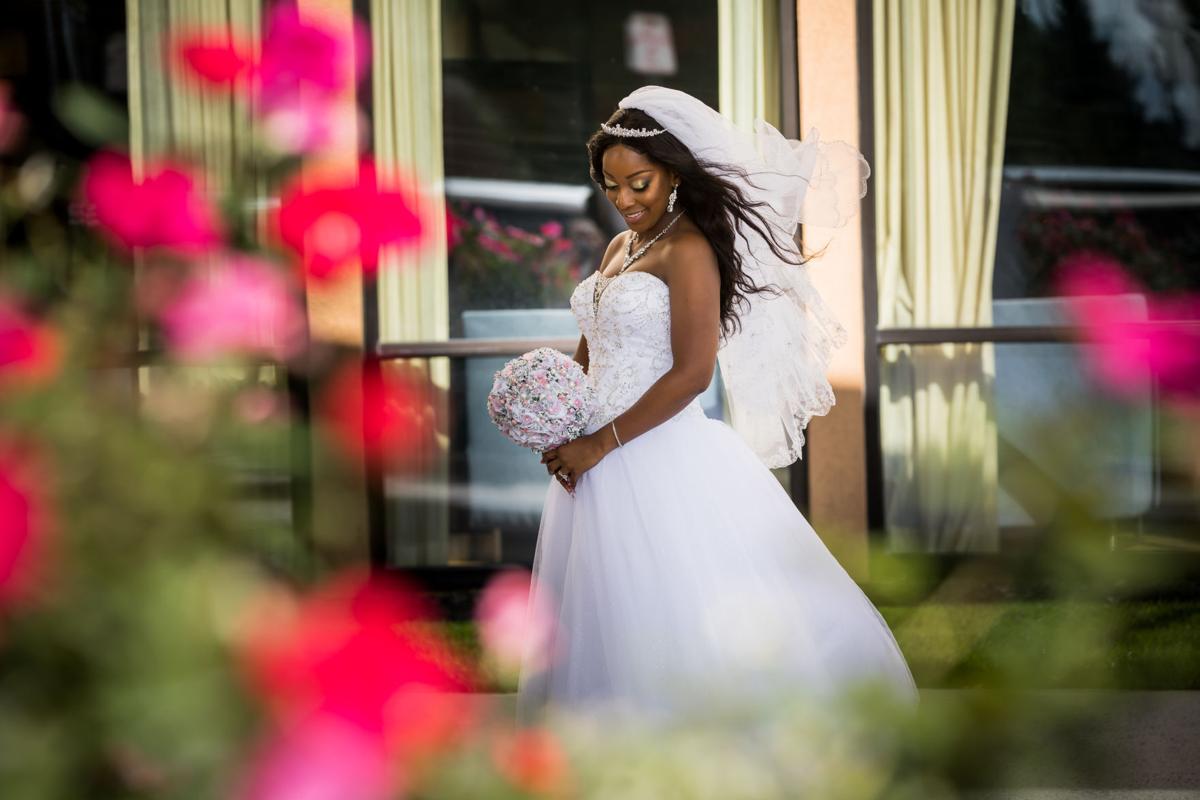 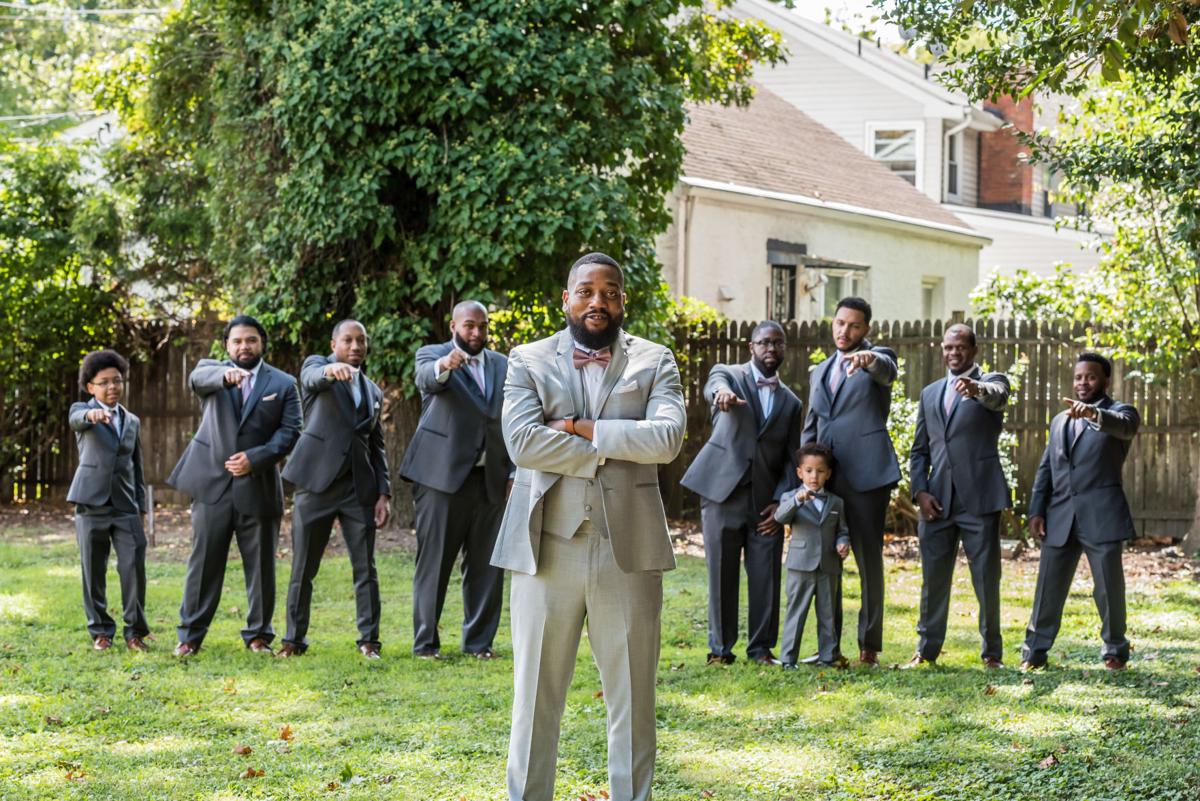 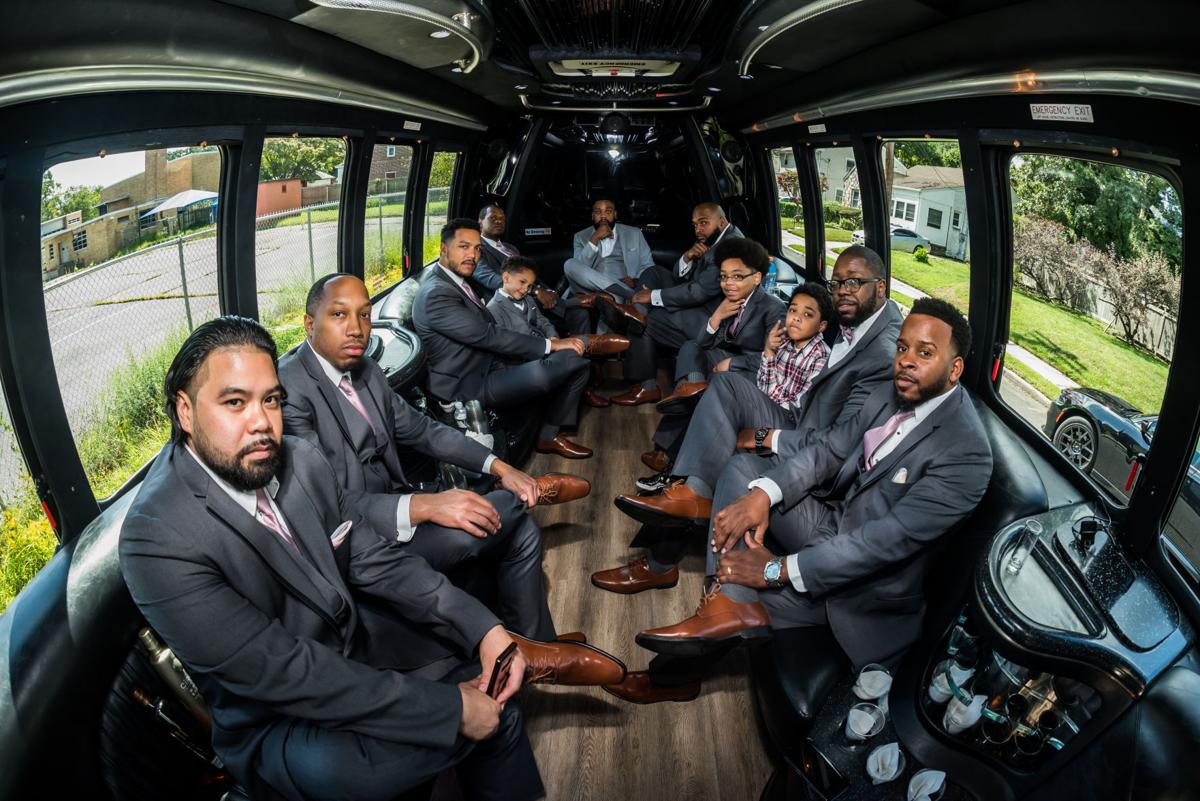 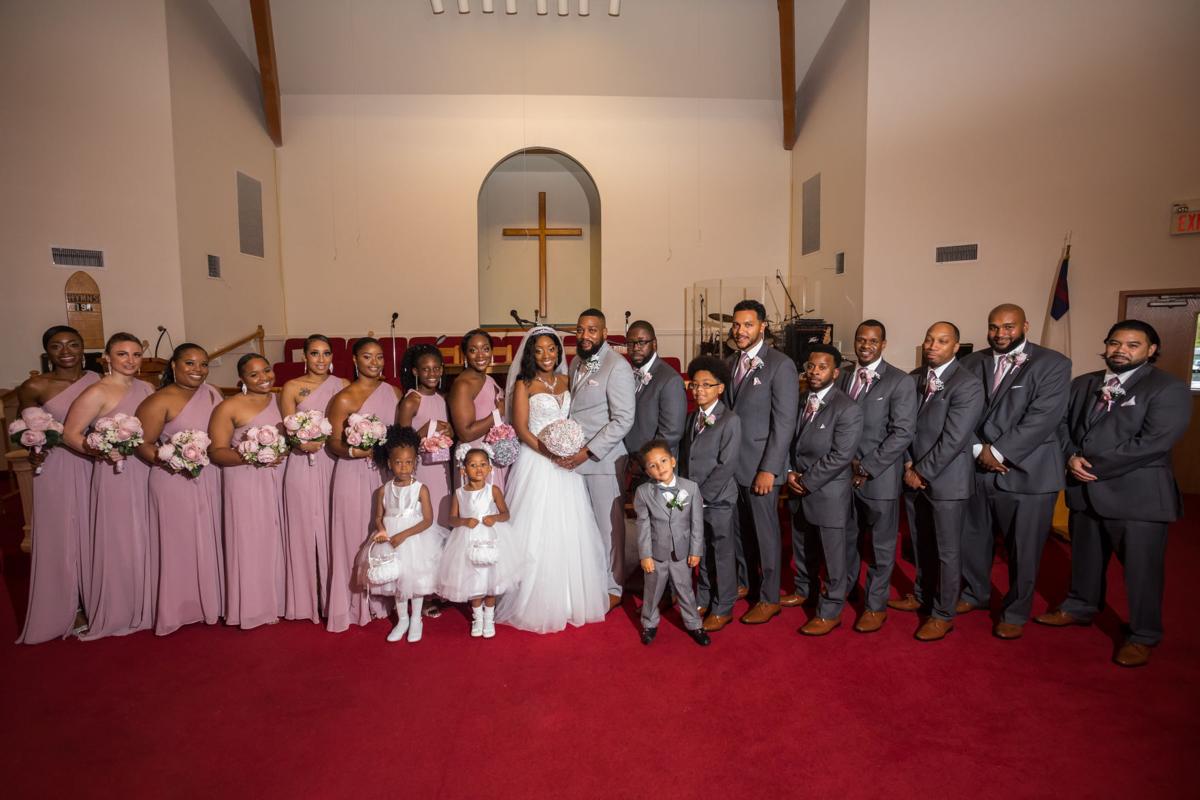 The bride and groom had numerous friends and family on hand for their nuptials. 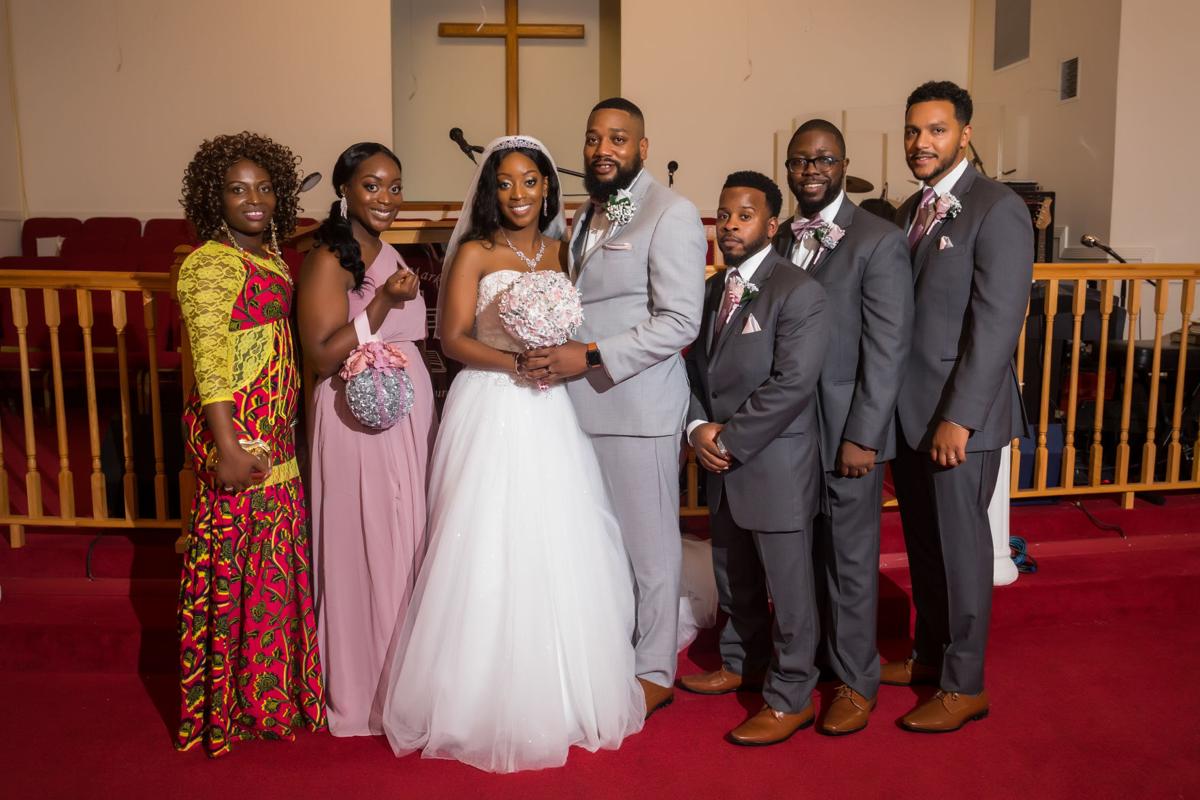 The couple, Vanessa Tyler and Reginald Cleveland, were surrounded by their family for the wedding at St. Marks Baptist Church in Browns Mills, New Jersey. Maria Kalitina photo 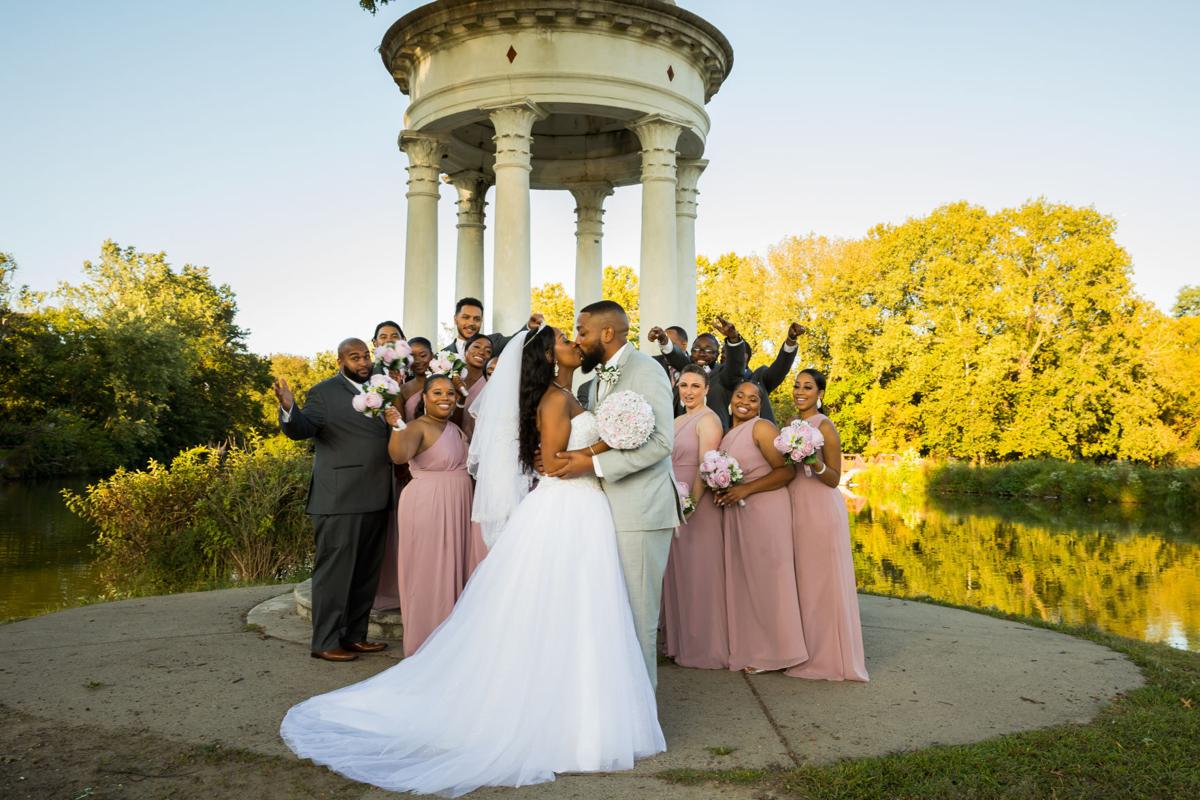 Vanessa Tyler and Reginald Cleveland were married Sept. 7, 2019, and their wedding colors were rose quartz and gray. Maria Kalitina photo 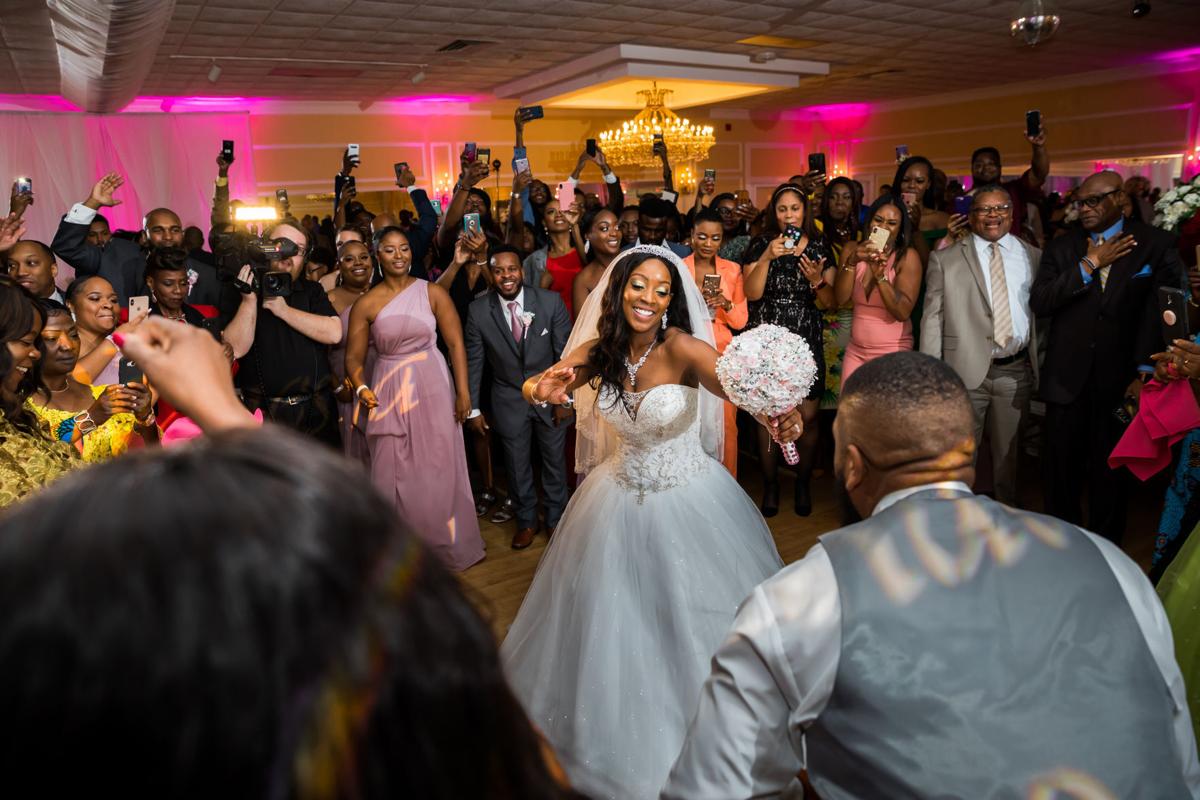 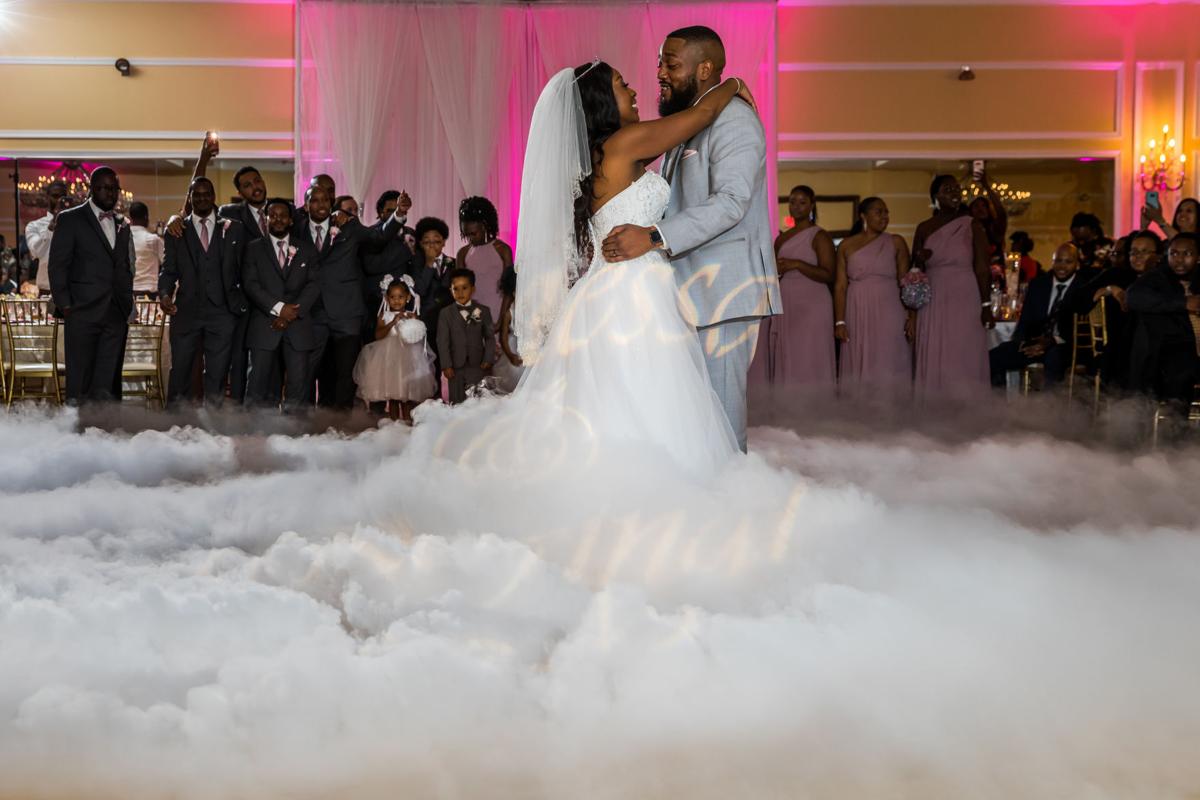 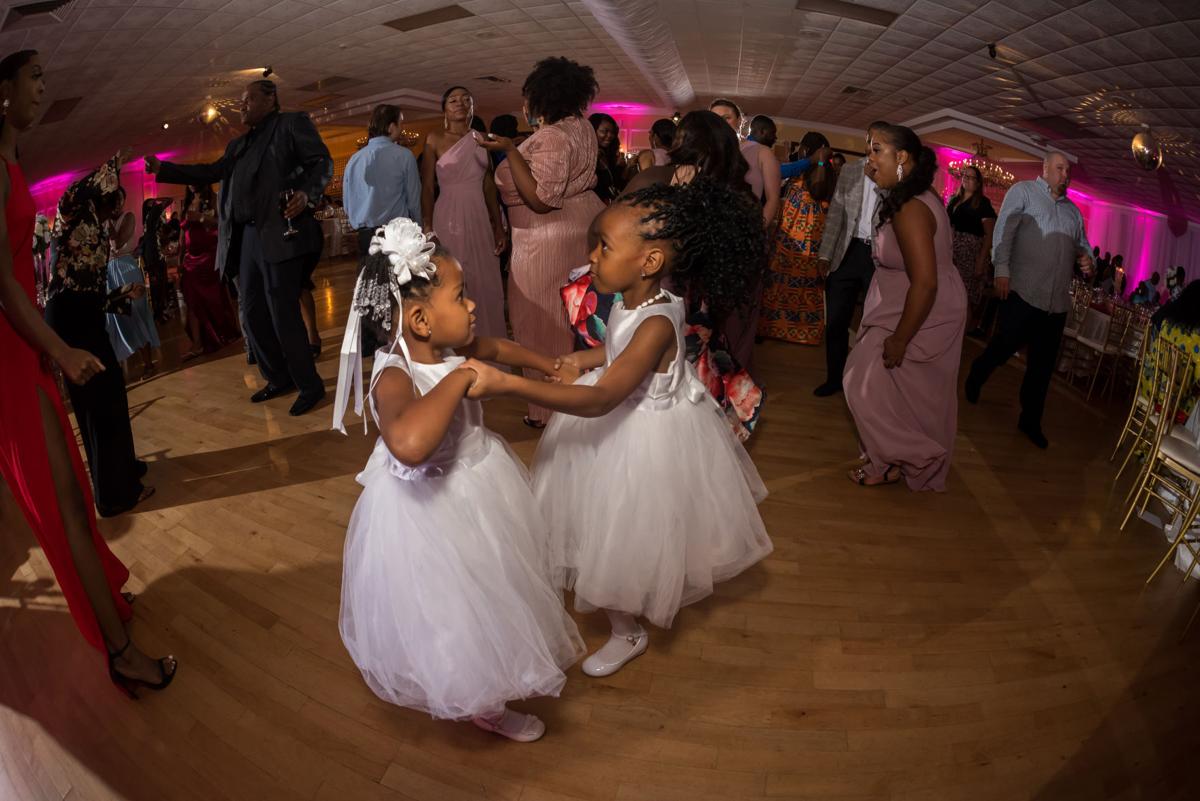 Flower girls Celine Morris and Asia Jenkins made sure to get on the dancing fun during the reception. Maria Kalitina photo

1. Vanessa Tyler and Reginald Cleveland were married Sept. 7, 2019, and their wedding colors were rose quartz and gray.

3. Vanessa Tyler with her bridesmaids and flower girl.

4. Groom Reginald Cleveland and his groomsmen.

The bride and groom had numerous friends and family on hand for their nuptials.

The couple, Vanessa Tyler and Reginald Cleveland, were surrounded by their family for the wedding at St. Marks Baptist Church in Browns Mills, New Jersey. Maria Kalitina photo

Vanessa Tyler and Reginald Cleveland were married Sept. 7, 2019, and their wedding colors were rose quartz and gray. Maria Kalitina photo

Flower girls Celine Morris and Asia Jenkins made sure to get on the dancing fun during the reception. Maria Kalitina photo

The former Vanessa Tyler and Reginald Cleveland were married Saturday, Sept. 7, 2019, at St. Marks Baptist Church in Browns Mills, New Jersey. The wedding colors were rose quartz and gray. The bride’s mother did the floral arrangements. Vanessa channeled her inner princess with not one — but two dresses. The first gown was white, traditional ballroom styled gown with a pretty sweetheart neckline and lots of shimmer. It reminded the bride of Cinderella’s gown which made her feel like royalty when she put it on. The second dress was an off-white ivory color, very form-fitting, small train attached to the back, lots of lace and beaded details on the front. The reception dress was more relaxed, easier to move around in and perfect for dancing.

Vanessa Tyler was born in Bensalem, Pennsylvania, and lived in Bucks County with her mother and siblings for most of her life. During the second half of high school, her family moved to Northeast Philadelphia where she graduated from The Philadelphia Academy Charter High School. She was a member of the National Honor Society in High school and attended Bloomsburg University of Pennsylvania where she completed her undergraduate program in Business Administration. Some of Vanessa’s hobbies include working out, shopping and volunteering at the local animal shelter (she loves dogs).

Reginal Cleveland is from Browns Mills, New Jersey, and was raised by his father, Pastor Michael Wayne Cleveland who was a former pastor of the church where they got married. In addition, to his father, the groom was raised by his hilarious family because my mother was not around. Reggie — as he’s known to his friends — attended the Art Institute of Philadelphia and got an associate’s degree in graphic design and a bachelor’s degree in animation and multimedia design and graduated with honors. When he’s not working, Reggie is drawing and creating. The groom even designed the programs for the wedding.

It all began in Langhorne, Pennsylvania. The couple met at work and the groom trained Vanessa. They were friends for a few years and both were dating other people when they met so they got the opportunity to get to know each other as friends first and built a relationship off of that.

The proposal happened in Leland, North Carolina, on Thanksgiving morning 2018. Two of the groom’s cousins also got engaged (not the same Thanksgiving but in the past). He called an aunt before he drove there to let her know that he was going to propose. Once he got there his aunt helped him hide the ring from Vanessa. Before praying over his aunt’s dinner the family went around a circle saying what they were thankful for. I of course went last and once it was my turn I said, “I am thankful for. So, when it got to Reginal, he said, “What I would be most thankful for is if you Vanessa would marry me.” He got down on one knee and presented the ring. His family jumped for joy and Vanessa was so shocked that he had to ask her twice.

Reflections in Their Words

The groom: A strong friendship is the glue that bound us together. The bride: The greatest thing you will ever learn, is just to love and be loved in return.

The reception was at Falls Manor in Bensalem, Pennsylvania. The couple had Bruce Dixon — also known as — DJ Cincere rocked the house the entire night. Reginal recalls, “I would say the dance battles we had all night and the swag surf were the most fun moments during the reception.” And who’s the better dancer ... the groom wins that battle because the bride only knows the one-two-step.

For the honeymoon, the couple stayed at the Ritz-Carlton in Aruba. Their honeymoon was not without its Philadelphia connections too. They traveled the entire island using a compass and got to meet Philadelphia’s own Floyd Mayweather and they also witnessed Wanya Morris from Boys II Men get married on the beach from their balcony.

The former Chiantii Sherrills and Eric Freeman were married Saturday, June 15, 2019, at the Falls Manor Catering & Special Events in Brist…

6 secrets to the perfect updos

Grab inspiration from hairstyles you may see on Instagram, Pinterest or other visual sources. Now you know where your heading with your hairst…

Like most Cinderella stories, this one involves a fancy ball, a gown and most importantly shoes but at the end of the night our heroine doesn’…

If you’ve been to the store in the past few weeks, then you know that hand sanitizer has been one of the hardest items to come by.

How about having a virtual wedding?

1. Choose your platform: You can use video conference software Zoom that offers free and paid subscriptions. You can host 100 attendees and “m…