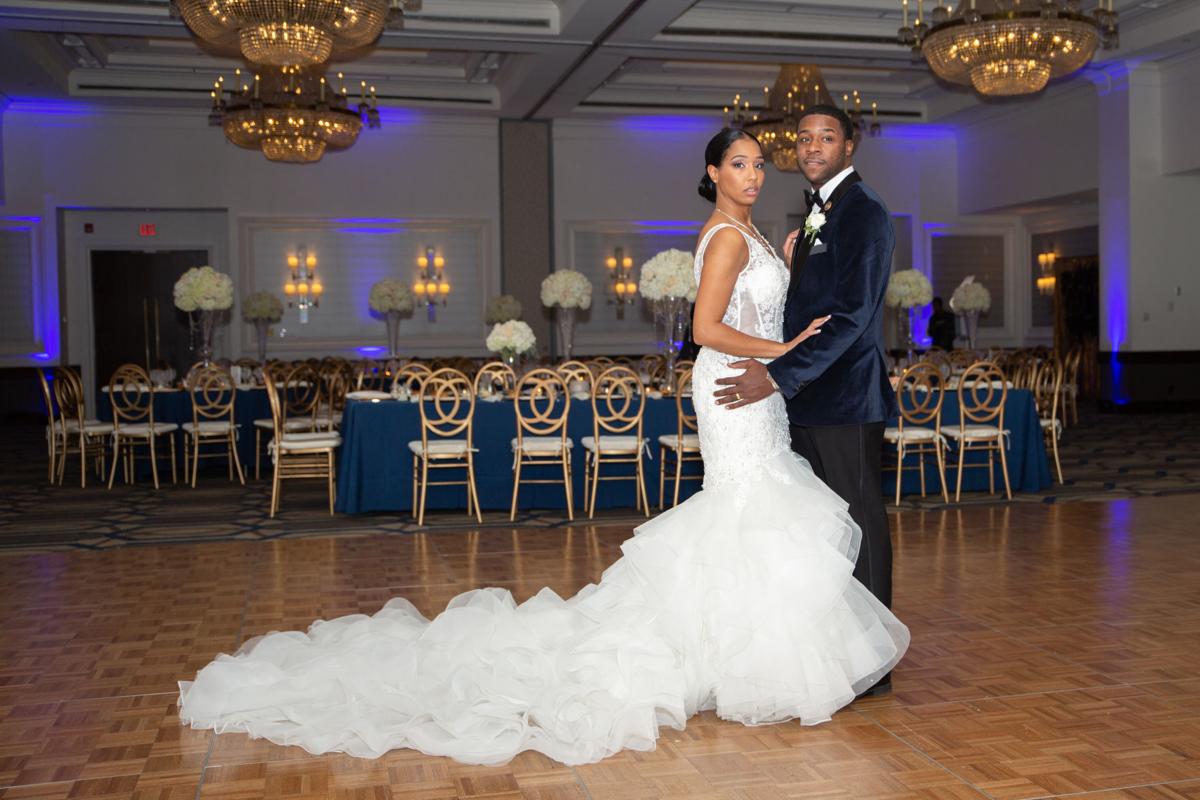 Thomas Young and Melissa Thompson in Reception Room. The room was designed by Traci Meldrum and Krystyna Szymanski did the floral arrangements. 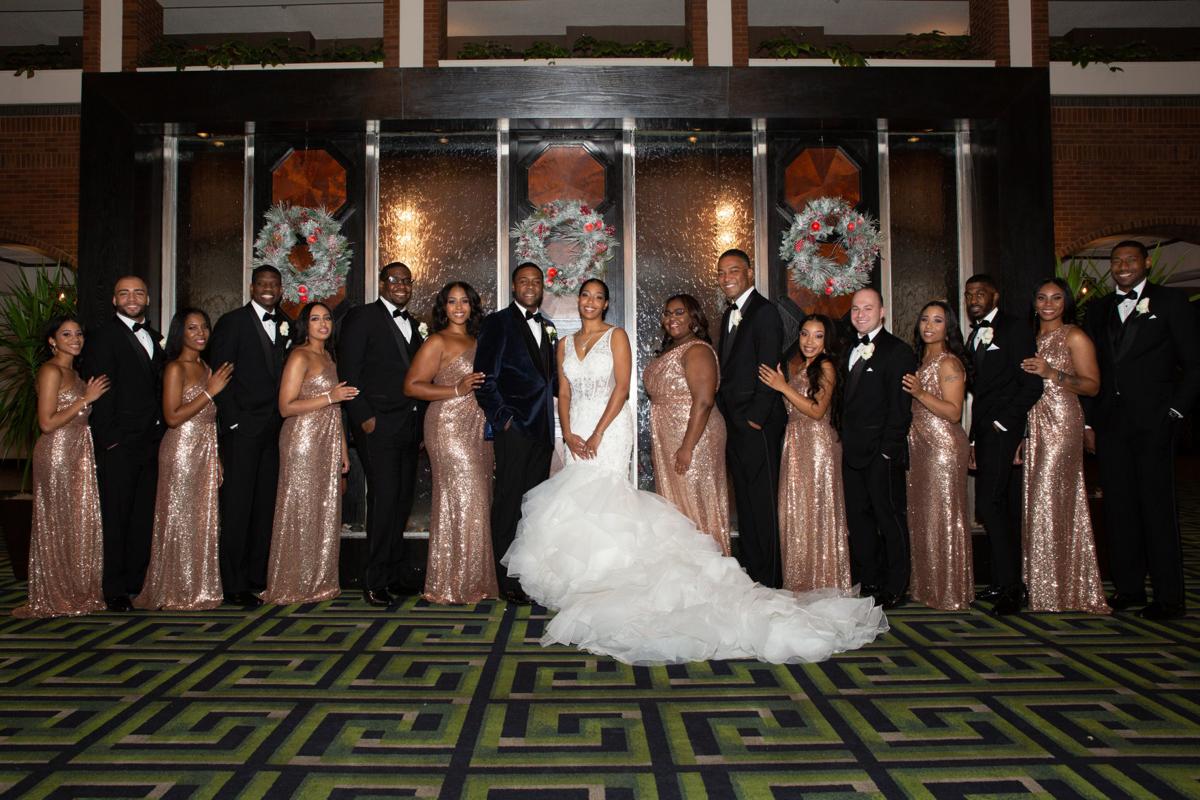 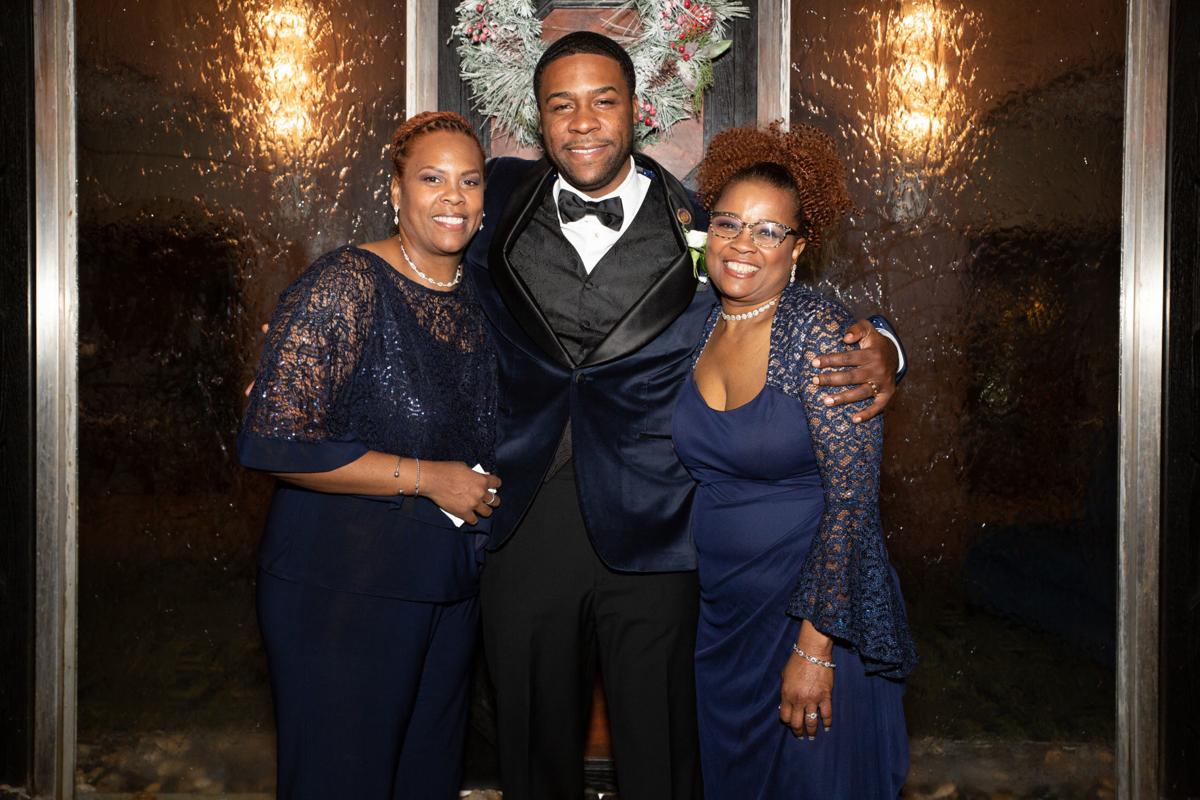 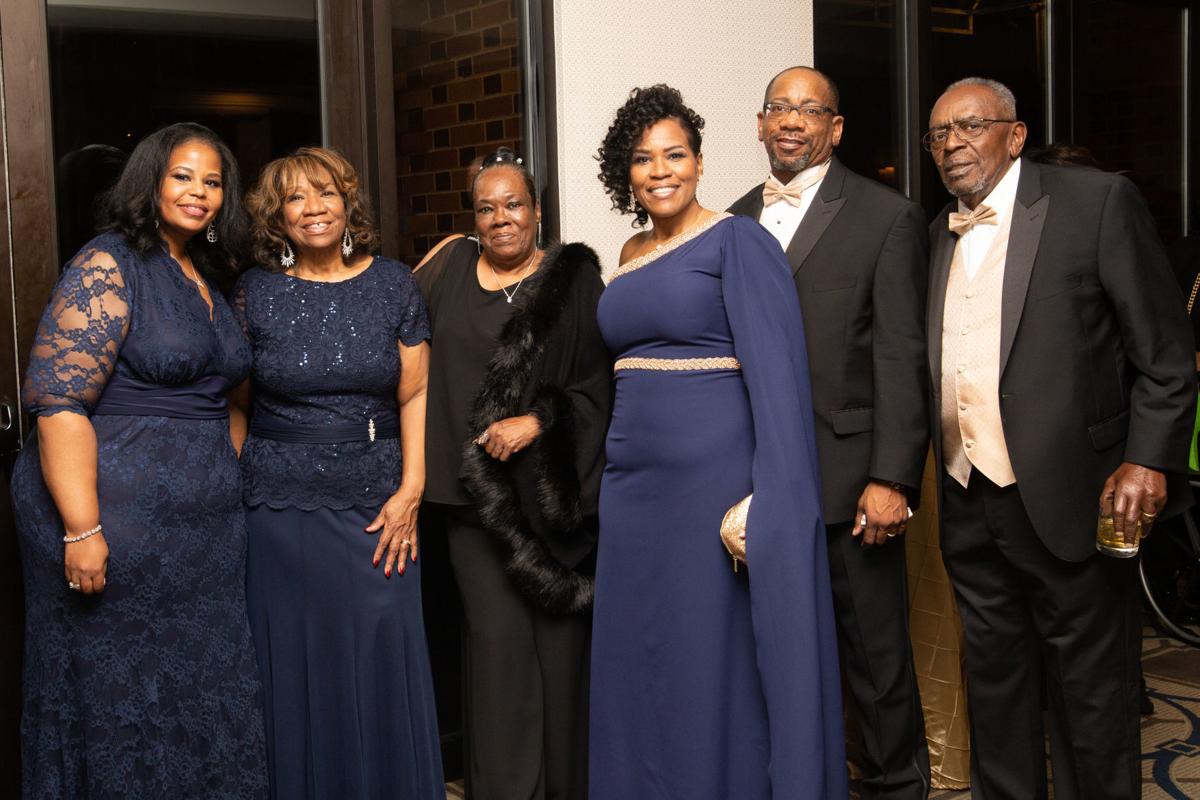 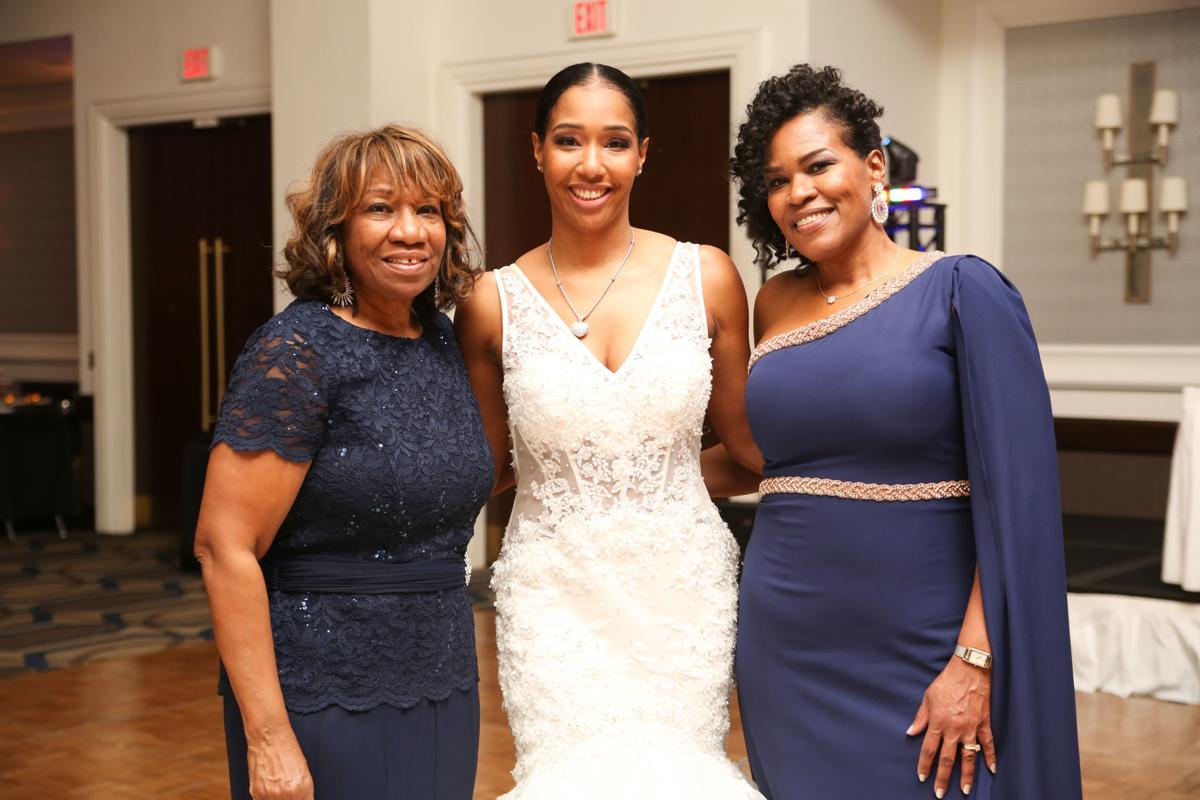 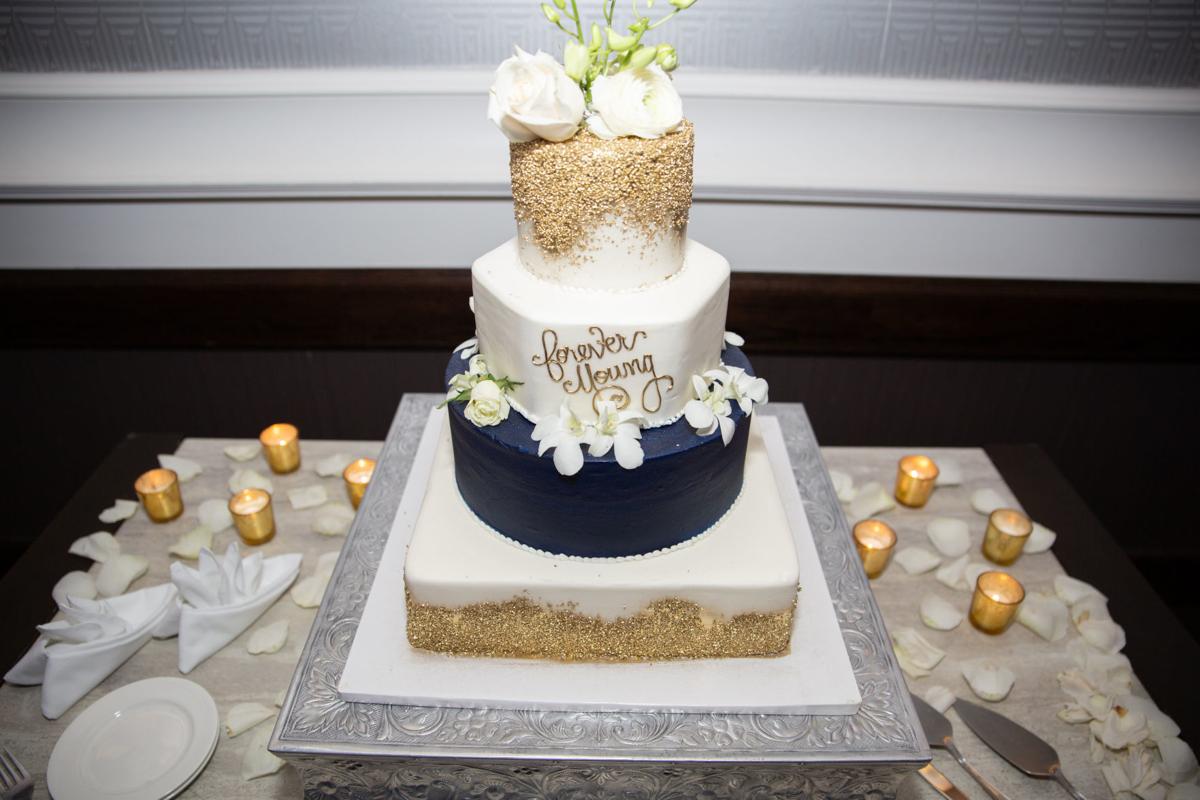 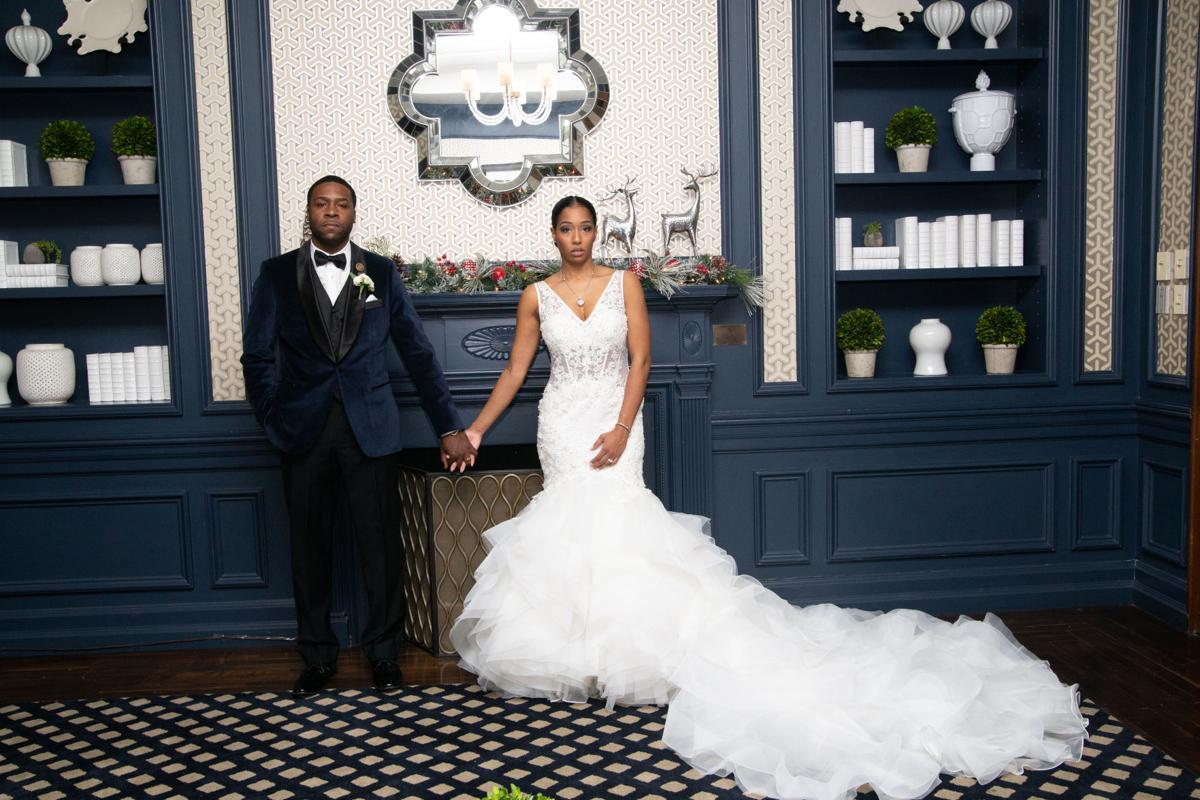 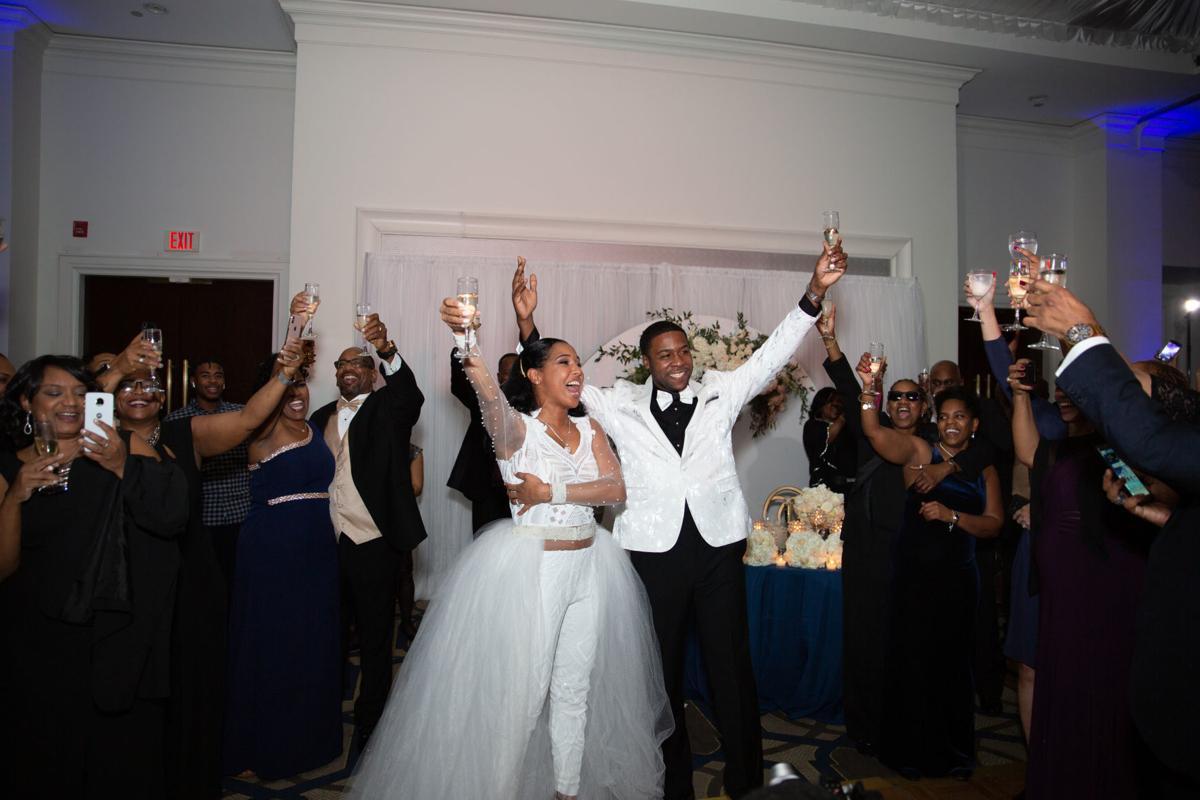 The couple raises their glasses at midnight to bring in the new year with their guests. PHOTO: Talya Hailey 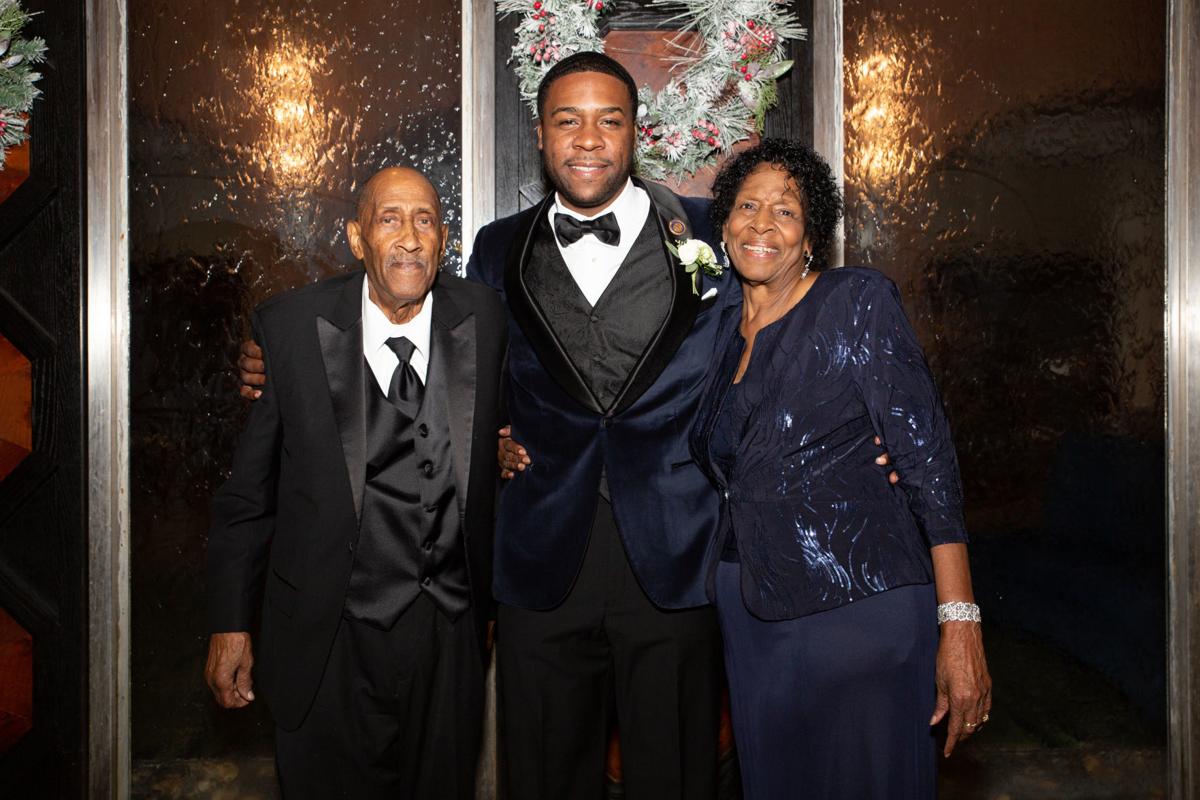 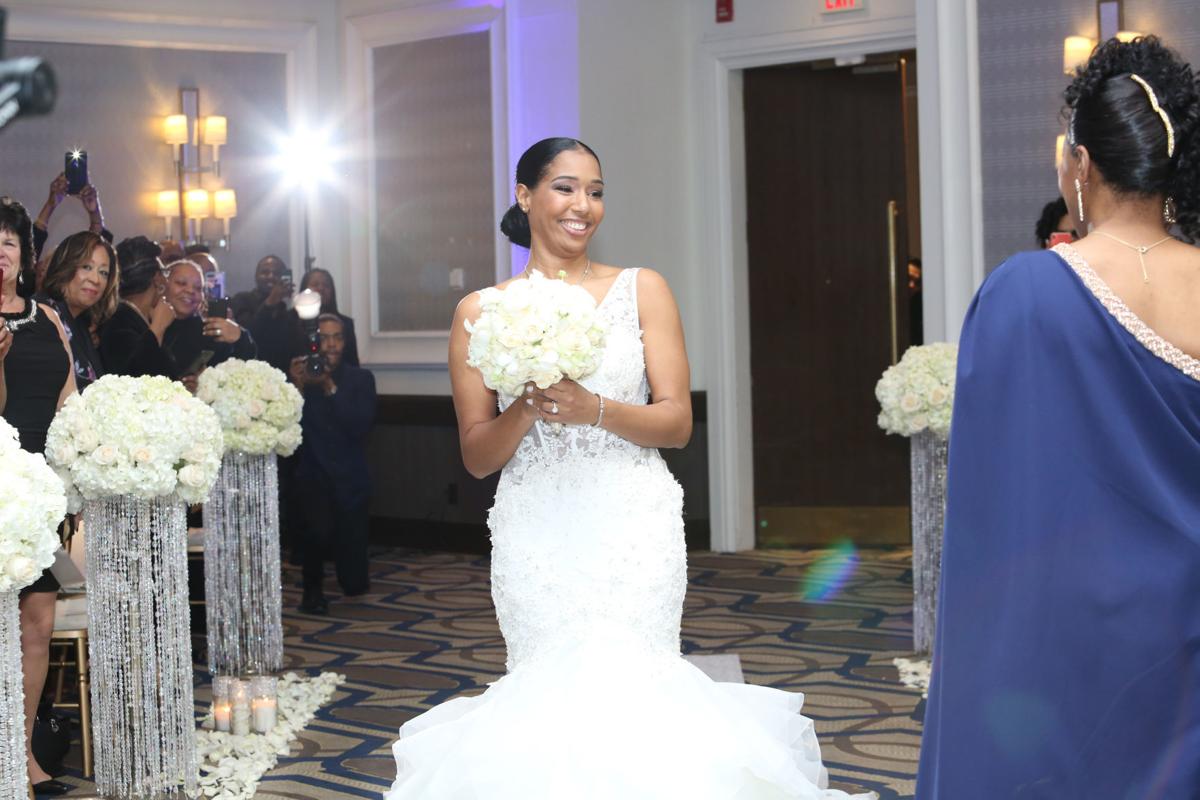 Bride Melissa Thompson meets her mom, Christinette Dixon, as she approaches the end of the aisle to meet her groom Thomas. Her jewelry was by David Yurman, hair by Ashley Blount of Deeper than Hair, makeup by Ellen Conway and floral arrangement by Krystyna Szymanski. PHOTO: Talya Hailey 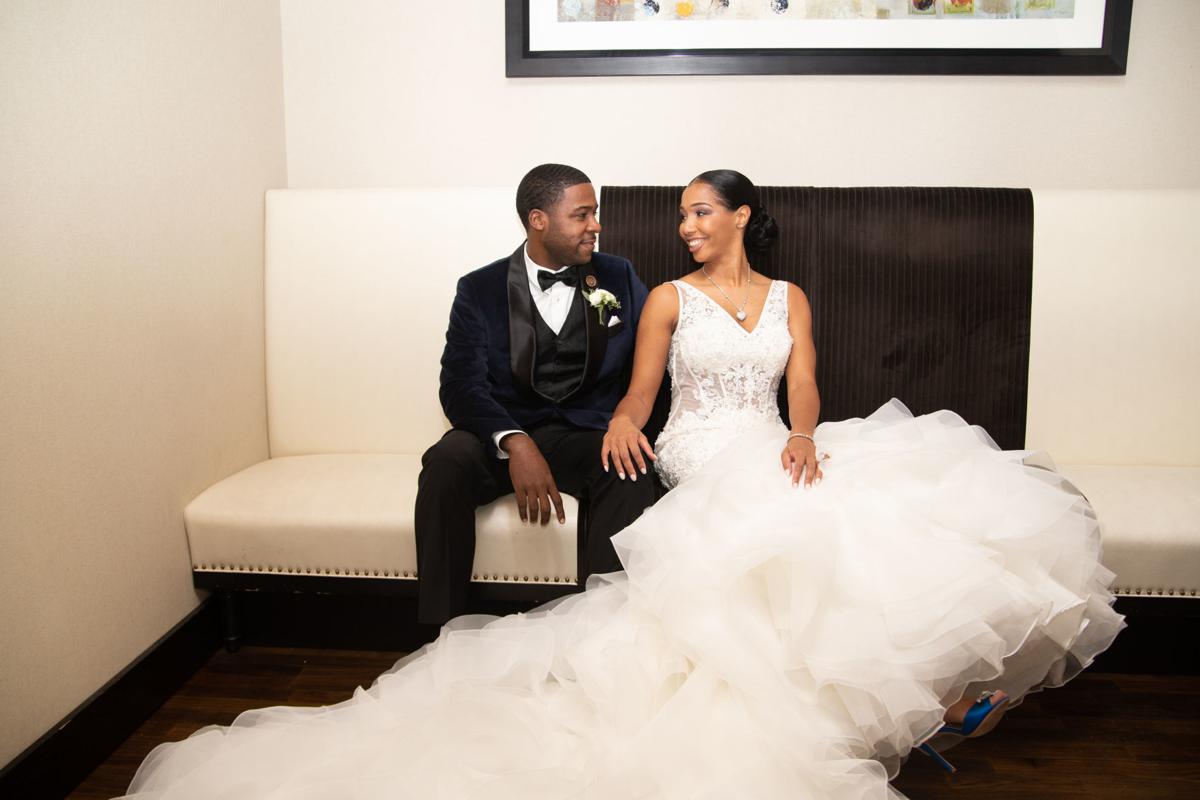 Melissa and Thomas were married at the Sheraton Society Hill.

Thomas Young and Melissa Thompson in Reception Room. The room was designed by Traci Meldrum and Krystyna Szymanski did the floral arrangements.

The couple raises their glasses at midnight to bring in the new year with their guests. PHOTO: Talya Hailey

Bride Melissa Thompson meets her mom, Christinette Dixon, as she approaches the end of the aisle to meet her groom Thomas. Her jewelry was by David Yurman, hair by Ashley Blount of Deeper than Hair, makeup by Ellen Conway and floral arrangement by Krystyna Szymanski. PHOTO: Talya Hailey

Melissa and Thomas were married at the Sheraton Society Hill.

The former Melissa Ashley Thompson and Thomas Nathan Young were married on Dec. 31, 2018 in a formal, evening ceremony at the Sheraton Society Hill in Philadelphia. Pastor Karen Nichols officiated the ceremony.

The mother of the bride, Christinette Dixon, gave her daughter away in marriage. Melissa was exquisite in her Randy Fenoli gown from Kleinfeld Bridal in New York. The mermaid style design was adorned with crystal beading and floral appliques on a V-neckline with an illusion bodice. Flounced tulle with an organza mermaid train and custom-made bustle by Philadelphia Bridal Alterations (Shirl Williams) completed the perfect look.

Melissa carried a bouquet of white roses, ranunculus and peonies with crystal and pearl accents. Recording artist Carol Riddick sang “Beautiful” at the ceremony and a special Scripture reading was delivered by Leslie Whittaker.

Melissa, 30, is a native Philadelphian. Her parents are Christinette Dixon and Scott Thompson. Melissa is an award-winning marketing and strategic communications professional. She earned her master’s degree in communications from Villanova University and a bachelor’s degree in journalism and political science from Indiana University of Pennsylvania (IUP), where she met Thomas.

Thomas, 31, is also a native Philadelphian. His parents are Phyllis Young and Cathy Washington. Thomas made a career change from sports to politics and community engagement. In 2010 after finishing a college basketball career at Indiana University of Pennsylvania, Thomas pursued a career in professional basketball, in Europe. Following three years of playing in Germany, he decided to return to IUP to earn his degree and coach basketball. Following graduation and coaching, Thomas moved back to Philadelphia, worked for CareerTEAM, an organization that focused on career preparatory workshops, unemployment and job retention. Currently, Thomas is the chief of staff for state Rep. Donna Bullock, D-195th District, which covers parts of North Central and West Philadelphia.

The couple met while attending Indiana University of Pennsylvania. They knew each other and shared many mutual friends, but rarely spoke beyond a “hi” or “bye.” Fast forward to summer 2016 at the Democratic National Convention in Philadelphia. Melissa was an ambassador for the Georgia delegation and Thomas was attending for work-related purposes. Both worked 12-plus-hour days and ran into each other at one of many receptions. They began a conversation about what they’d been doing since IUP days and then attending the rest of the DNC events together that week. They went from receptions together, to dates and IUP trips together. The rest is history.

When Thomas received their” families’ blessings, it was time to come up with a master proposal plan. He shared, “Knowing how much Melissa cherishes her family, and how much her late grandmother, Tina Thompson meant to her, I knew that I wanted to propose around family. “Mellie,” Marissa regrets that her grandmother wasn’t here to see her marry and have a family. She always bragged about the corridor in Philadelphia City Hall that is named “Tina’s Walk” in her grandmother’s honor. I knew immediately that I wanted to propose in that special place. It would allow for both families to come together and be a part of the special moment, as well as include Melissa’s Mom-Mom Tina. I put my plan into action. I got in touch with Melissa’s vice president at work and asked if they could schedule a meeting at City Hall on Melissa’s calendar for Monday. That Monday morning, Mellie was getting dressed and mentioned she had a meeting in City Hall around noon. I told her that I had meetings there also and suggested we should meet before her meeting so that she could show me the “Tina’s Walk” memorial. Rushing to her “meeting”, she fussed that she only had a few minutes because she couldn’t be late. Meanwhile, families, close friends and co-workers arrived about 15 minutes before Melissa was scheduled to arrive and were hiding in the stairwell next to the memorial, waiting anxiously to be a part of the big surprise. I met Melissa at the elevator and we walked down the long hallway together, approaching the memorial. As we stopped in front of the memorial, dozens of people came from the stairwell and Melissa was in shock. Once she saw her coworkers and her freelance photographer from work, she realized this was all a big trick and she turned to see me on one knee. I asked her to continue being my best friend and would she do the honor of being my wife. Her first response was “of course I will!’ followed by an official “yes!”

Reflections … In Their Words

“Throughout my wedding day, I constantly reminded myself to live in the moment. My bridesmaids, mother and grandmother kept positive energy around at all times. Not to mention, the entire staff at the Sheraton was looking forward to our wedding celebration, so the vibe in the hotel was so fun and easy going. I was celebrating my love for my husband and everyone looked absolutely stunning, I knew it would be a perfect night.

My grandfather was going to walk me down the aisle, but he passed away on July 1, 2018. I decided that I didn’t want to replace my grandfather in such a big role. So, I walked down the aisle alone, knowing that he would be my angel escort. When the doors opened for the ceremony and I stood there at the marvel of more than 200 guests, and Thomas turned to me with tears streaming down his face and the look of awe. I had to remind myself to breathe, not fall, and smile. Once I looked at Thomas, I felt like I glided down the aisle on a cloud. My mother met me at the end of the aisle to give me away.”

“I didn’t expect Melissa’s dress to look so amazing, it was perfect. The fact that the first time in my life, all eyes were on me, and celebrating how I feel about her. It was a fun and humbling experience to see people checking into the hotel, excited because it was our big day. When I first saw Melissa walking down the aisle, the feeling was inexplicable. I didn’t hear the music, I didn’t see the people, it was a tunnel when I saw her. I felt so proud that she was walking toward me, to be with me. The feeling was a combination of excitement, joy and happiness.”

A wonderful reception was held in the ballroom at the Sheraton Society Hill. Melissa and Thomas changed into a second look. Melissa wore a custom pearl and sequin bridal jumpsuit with a jewel-belted detachable train, made by Dah’mod Collins of RM 67. Thomas wore an ivory floral dinner jacket and custom bowtie by Collins.

There was a cocktail hour with hors d’oeuvres and an array of delicious food stations. The ballroom was beautifully decorated. Navy linens, gold chargers, infinity chairs, and custom sunglasses at each place setting were lovely. each guest received a soy candle with the couple’s custom “Forever Young” fresh fragrance, by T and T creations. The floral arrangements consisted of hydrangeas and roses in varying heights that were decorated with hanging crystals and candlelight.

Melissa and Thomas danced their first dance as husband and wife to a rendition of the classic Etta James “At Last.” performed live by Riddick.

The newlyweds honeymooned in Saint Lucia and thought it was perfect. They enjoyed the beautiful ocean view from their balcony, the perfect place to catch the sun rise and set. We enjoyed the warm weather, touring the sulphur springs and taking mud baths, exploring caves from the boat. It was exciting to boat alongside dolphins as they made their way to the Pitons, a set of volcanoes on the coast of the Saint Lucia.

Melissa and Thomas also loved the Friday street festival in Gros Islet, where they were able to sample rum punches from local vendors. They enjoyed some of the best fresh-caught lobster that they ever had. The locals partied until the wee hours of the morning.

The former Shirley “Pumpkin” A. Jordan II and Kevin L. Roberts were married in a beautiful early evening ceremony at Northampton Valley Countr…

Wow, what a year for love!

The former Ashley N. Johnson and Scott T. Williams were married Sunday, Oct. 28, 2018 at The Historic African Episcopal Church of St. Thomas i…