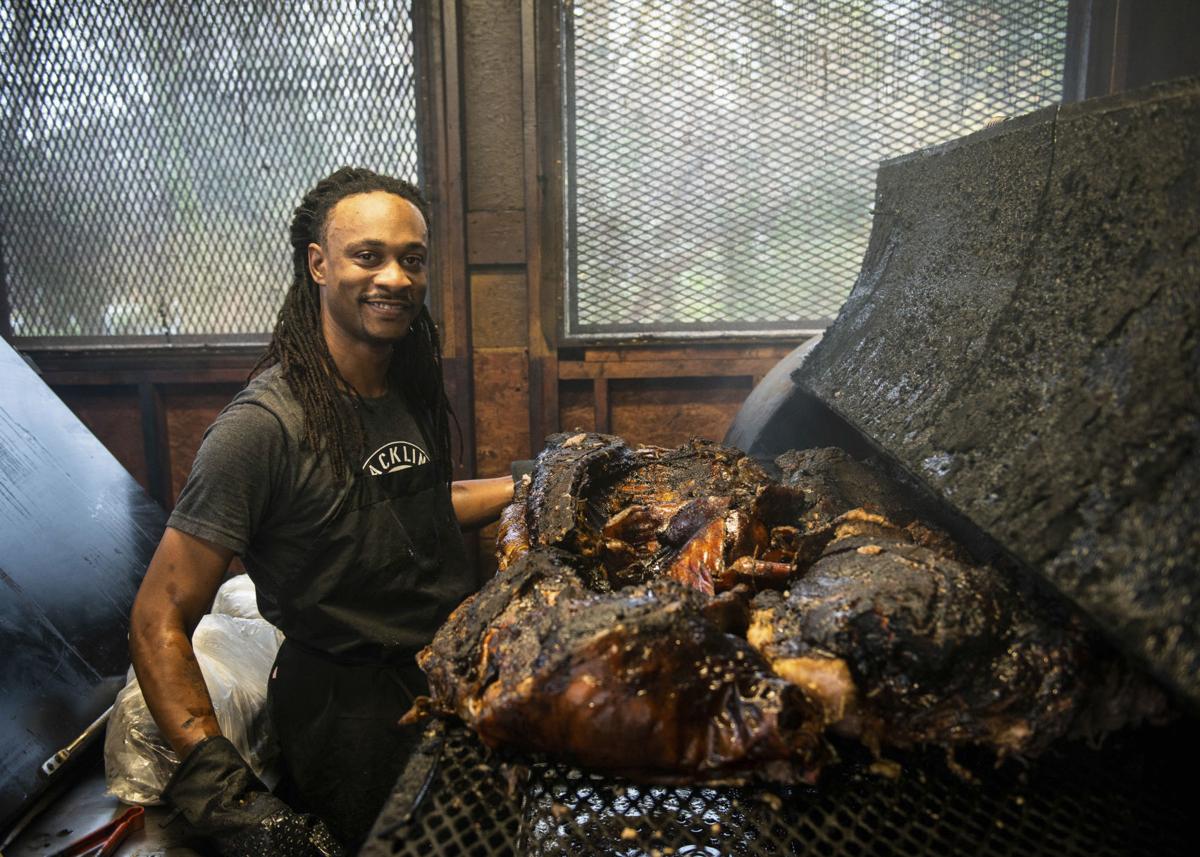 Bryan Furman, a pit master, at his restaurant B’s Cracklin’ Barbecue in Atlanta. He turns out whole-hog barbecue from heirloom-breed hogs. 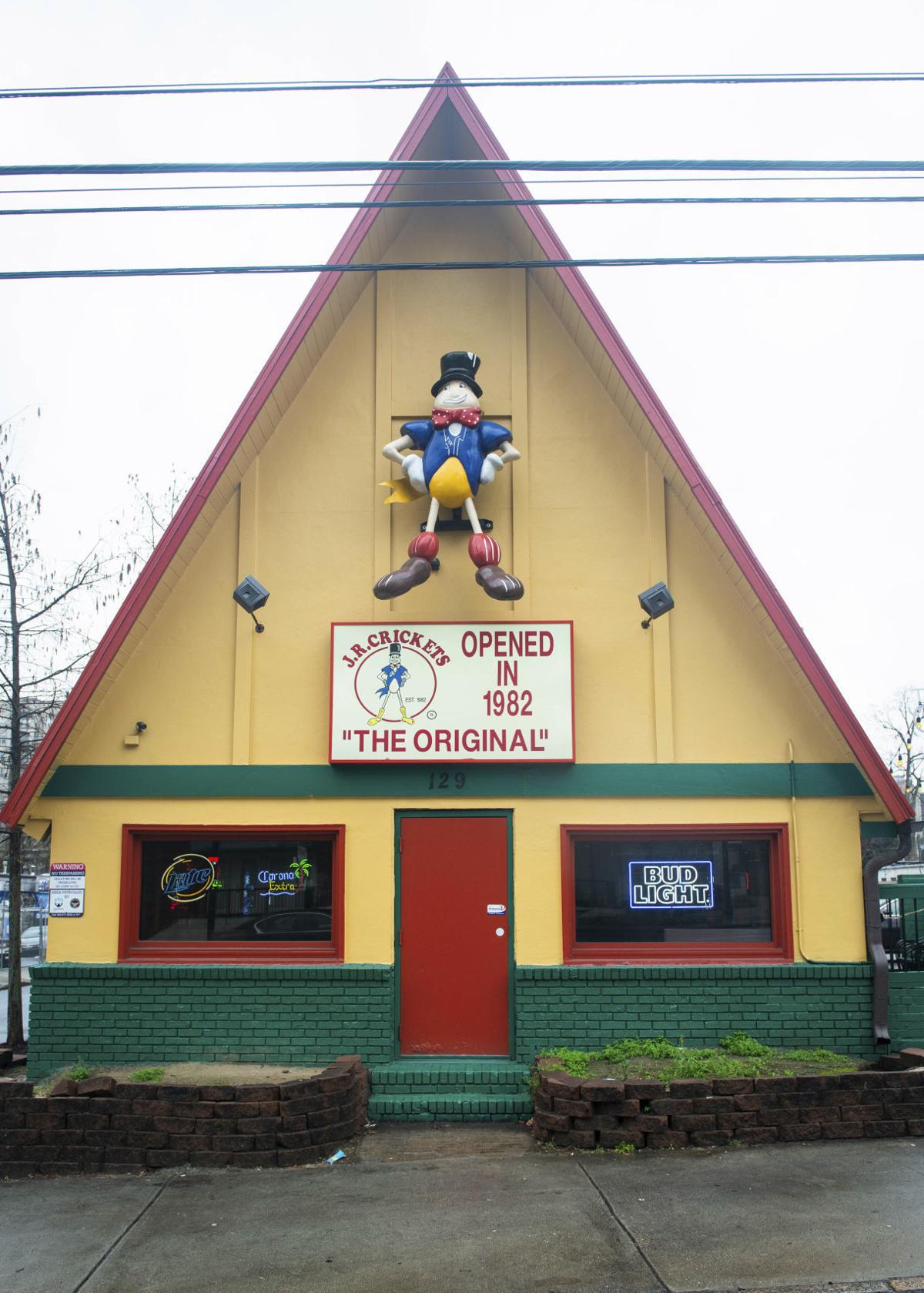 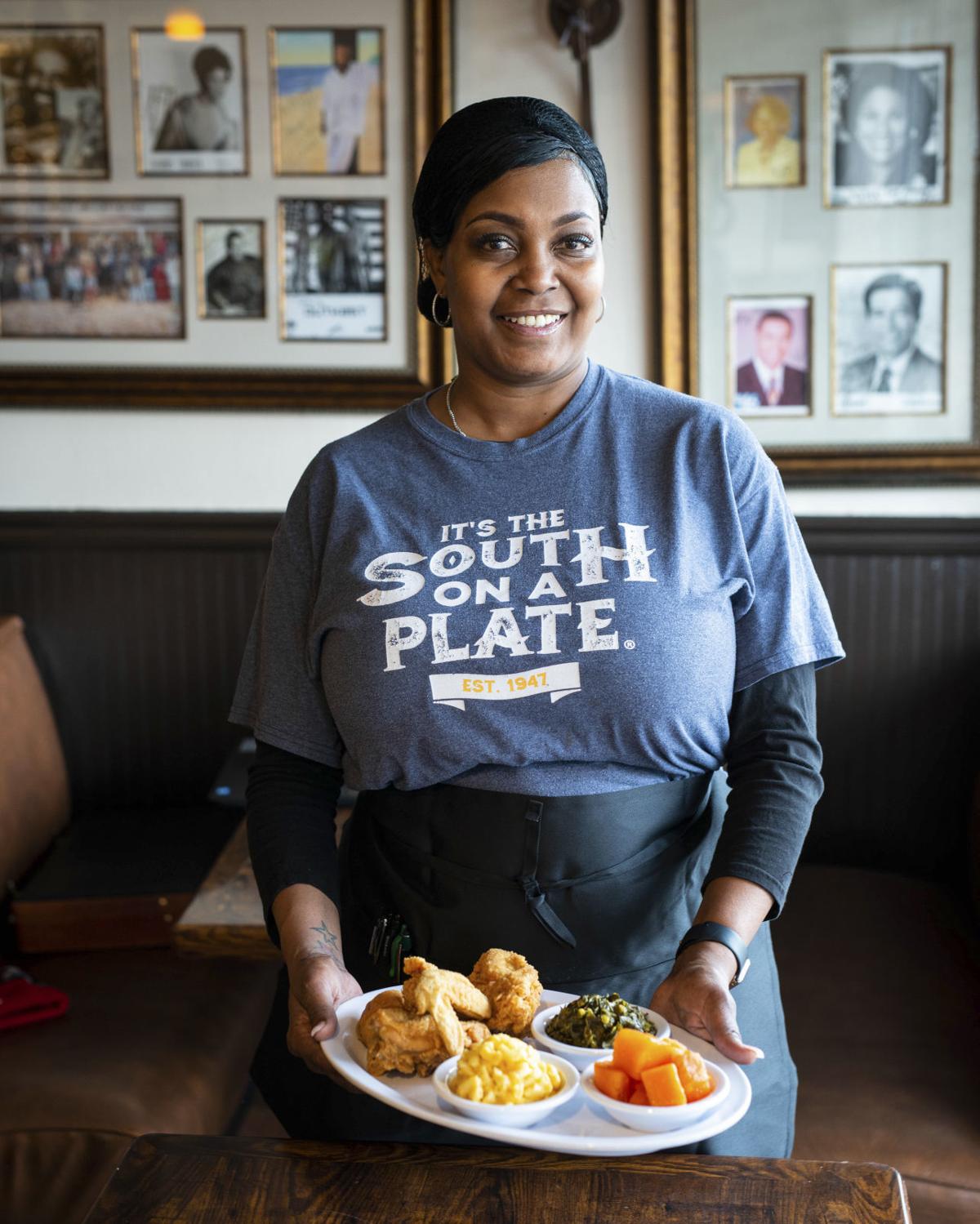 Shelia Bulter, a waitress at the Busy Bee Cafe, which has been in Atlanta since the 1940s. 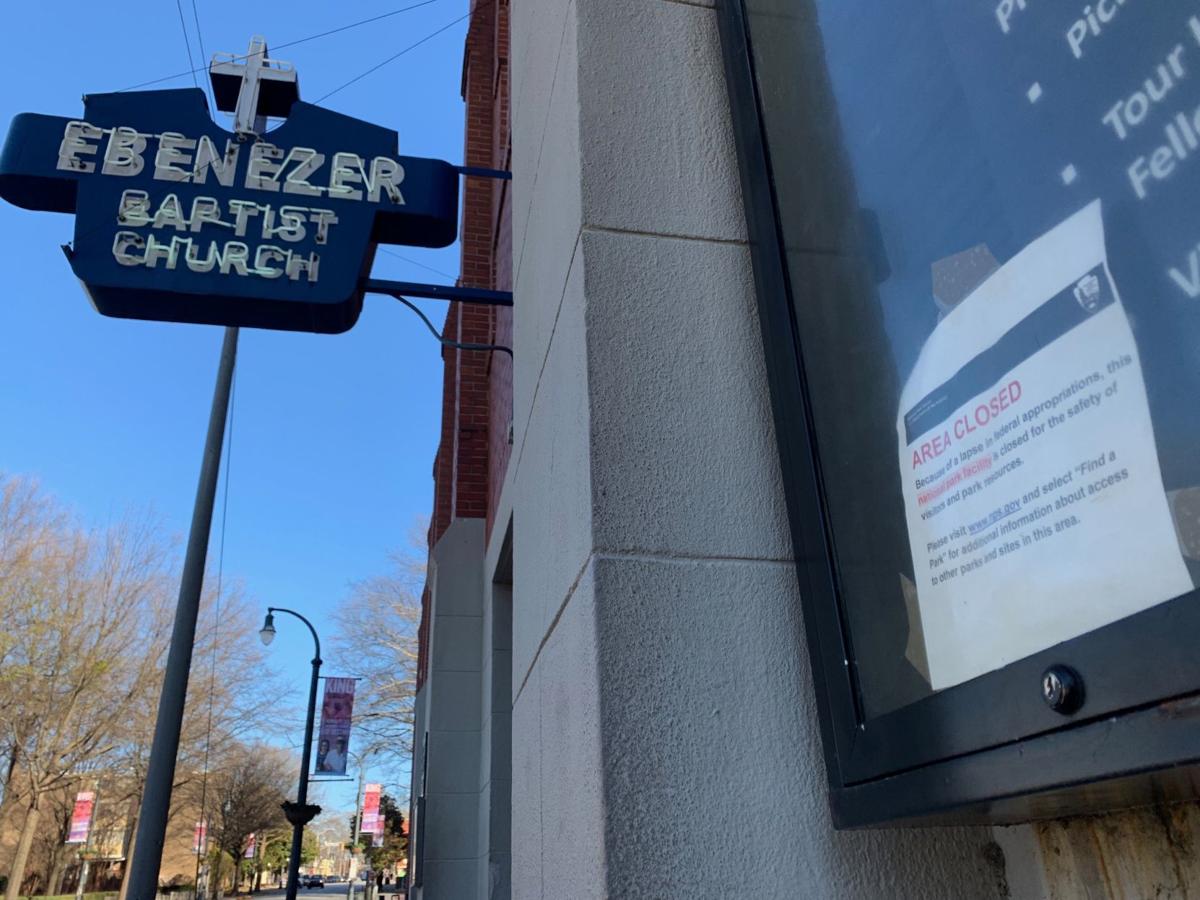 The Rev. Martin Luther King Jr. and his father served as pastors at Ebenezer Baptist Church.

Bryan Furman, a pit master, at his restaurant B’s Cracklin’ Barbecue in Atlanta. He turns out whole-hog barbecue from heirloom-breed hogs.

Shelia Bulter, a waitress at the Busy Bee Cafe, which has been in Atlanta since the 1940s.

The Rev. Martin Luther King Jr. and his father served as pastors at Ebenezer Baptist Church.

ATLANTA — Downtown Atlanta is home to a host of densely packed attractions — the Georgia Aquarium, World of Coca-Cola, the National Center for Civil and Human Rights, the Chick-fil-A College Football Hall of Fame and more.

But the city’s real flavor comes from its neighborhoods, and any visit to Atlanta should skew heavy on food and beverage outings, as this guide does.

Here are some of the best areas within easy reach of downtown Atlanta:

One of Atlanta’s most interesting and storied spots, Historic Oakland Cemetery (248 Oakland Ave.) opened in 1850, making it the city’s oldest public park.

The graves serve as resting places and reminders of Atlanta’s layered history. Jewish, Confederate and African American grounds are all part of its 48 acres. Mayors, former slaves, athletes and authors are all buried here.

The elaborate Victorian cemetery carries its dual role as a park into the modern era. Picnickers and dog-walkers are welcome, and Oakland Cemetery is host to a whole calendar of events from music festivals to Halloween tours. Tickets for various tours can be purchased in advance.

For a kid-friendly outing, Zoo Atlanta (800 Cherokee Ave.), located in 131-acre Grant Park, is a crowd-pleaser. The zoo is one of only four in the US to house giant pandas.

The National Park Service offers ranger-led tours that are first-come, first-served and limited to 15 people. Getting to the visitor center early in the morning to sign up is key.

The visitor center is part of the Martin Luther King, Jr. National Historical Park (450 Auburn Ave.), which is located in the Sweet Auburn neighborhood. Ebenezer Baptist Church, where King and his father served as pastors, is also nearby.

A block south of the MLK birth home, Atlanta’s young (and youngish) gather along Edgewood Avenue.

About a mile and half north, Ponce City Market is a beacon of adaptive-reuse development and premium dining and retail.

Ponce City Market sits along the Atlanta BeltLine, a 22-mile urban trail that, when finished, will connect 45 intown neighborhoods. This stretch, the Eastside Trail, is the place to people watch and get a sense of Atlanta’s rapid redevelopment.

A few blocks down Ponce, in the Poncey-Highland neighborhood, the Clermont Lounge (789 Ponce De Leon Ave. NE) is a you-have-to-see-it-to-understand Atlanta institution where a 60-something stripper named Blondie crushes PBR cans with her breasts.

Upstairs, the trendy boutique Hotel Clermont recently opened, complete with a sultry lobby bar and a fun rooftop watering hole with great views of the city.

In Midtown, the fabulous Fox Theatre (660 Peachtree St.), has hosted musical acts, theater performances, movies and more in its ornate Moorish- and Egyptian-influenced auditorium since 1929. Ticketed tours of the space can be booked in advance.

The Center for Puppetry Arts (1404 Spring St.) is the largest American nonprofit dedicated solely to puppet theater. There’s a museum with a Jim Henson Collection and a Global Collection, rotating performances (for kids and adults), workshops and other programs.

The High Museum of Art (1280 Peachtree St.) just wrapped up its blockbuster showing of “Yayoi Kusama: Infinity Mirrors,” but its permanent collections are well worth exploring.

Nearby, 200-plus acre Piedmont Park is Atlanta’s biggest city park and a hub for exercisers, meanderers and a host of festivals and events.

Southeast of downtown, East Atlanta Village is home to a bevy of casual bars (and food, too) at the intersection of Flat Shoals and Glenwood avenues.

The Earl (488 Flat Shoals Ave.) offers consistently good bar food, a winning dive-bar atmosphere and a full schedule of local and national bands in the back room. (Take note: smoking is allowed inside.)

Down the block, the menu at gastro-pub Argosy (470 Flat Shoals Ave.) ranges from hot chicken to charred octopus, plus a long list of craft beers.

Across the street and down an alley, Gaja (491 Flat Shoals Ave.) offers contemporary takes on Korean classics alongside cocktails, soju shots and so on.

The historic West End neighborhood is a classic Atlanta story — an area that started out as a transportation hub (a trolley stop), hit hard times but is bouncing back strong now.

One thing driving that resurgence is the West End Trail portion of the BeltLine. And for those who find the Eastside portion too crowded, you might find a little more elbow room here.

For a classic soul-food experience, the no-frills Q Time delivers (1120 Ralph David Abernathy Blvd). You can fill up on large portions of delicious Southern favorites such as turnip greens, black-eyed peas, fried chicken and peach cobbler.

If that’s too heavy, the opposite end of the food spectrum is nearby at Tassili’s Raw Reality Cafe (1059 Ralph David Abernathy Blvd.), with a menu of raw vegan delights such as Moroccan Couscous or their Original Kale, a wrap with kale salad, avocado and tomato.

West End also has two sightseeing attractions worth a visit:

The Hammond House Museum (503 Peeples St.) is an excellent place to learn more about the contributions of visual artists of African descent. The museum has 18 works by influential 20th-century artist Romare Bearden.

The Wren’s Nest (1050 Ralph David Abernathy Blvd.) is an Queen Anne architectural pleasure and the former home of Southern newspaper writer and fiction author Joel Chandler Harris of “Uncle Remus” fame. It’s a close-up look at how an upper-middle class family lived at the end of the 19th century.

Howell Mill Road and the surrounding area is a hot spot for shopping and dining.

Long a hub for furniture, fabric and all things design, the Westside has filled in with restaurants, boutiques and chain stores.

Westside Provisions District is home to a collection of high-end fashion and decor stores as well as eateries including JCT Kitchen & Bar (1198 Howell Mill Road) and Taqueria del Sol (1200-B Howell Mill Road).

Bacchanalia (1460 Ellsworth Industrial Blvd.), opened in 1993 by chefs/owners Anne Quatrano and Clifford Harrison, has been at the top of Atlanta’s fine dining scene for decades.

And in an area teeming with craft cocktails, Northside Tavern (1058 Howell Mill Road) is the spot for a bottle of beer, lives blues and a game of pool. This smoky dive bar dates back to 1972, and it’s holding its own as new buildings rise up around it. — (CNN)