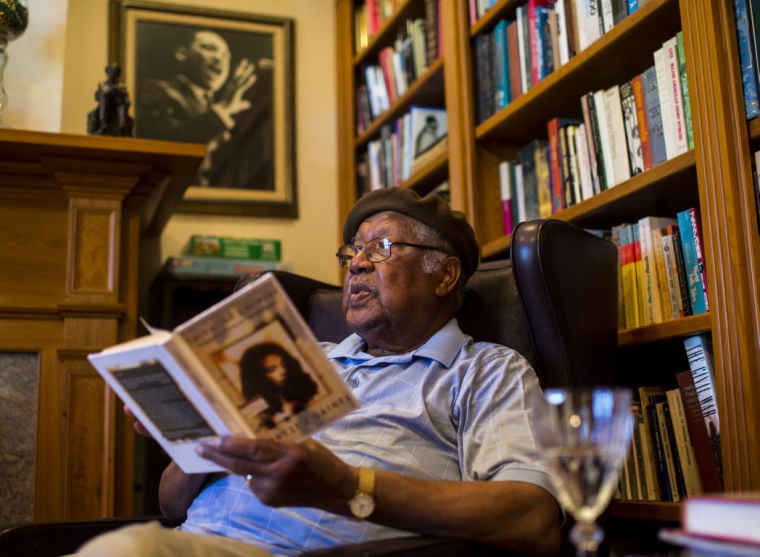 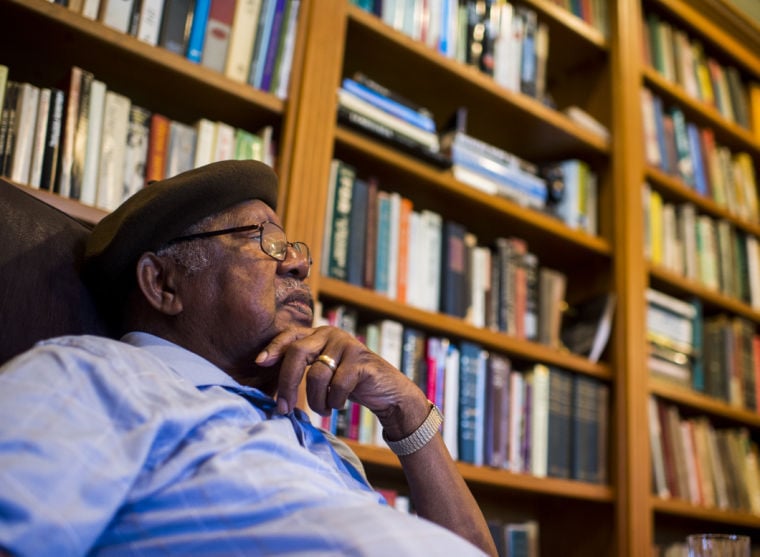 When Ernest Gaines’ first novel was published 50 years ago, he could not have owned the house where his ancestors were slaves and he once worked the fields as the son of sharecroppers at River Lake Plantation in Pointe Coupee Parish.

When Ernest Gaines’ first novel was published 50 years ago, he could not have owned the house where his ancestors were slaves and he once worked the fields as the son of sharecroppers at River Lake Plantation in Pointe Coupee Parish.

LAFAYETTE, La. — Along the False River near New Roads, northwest of Baton Rouge, the sun beats down on blue water and sugarcane fields surrounding a house in a hamlet called Oscar.

Ernest and Dianne Gaines designed the house and moved in 10 years ago, a day before their wedding anniversary.

When Gaines’ first novel was published 50 years ago, he could not have owned a house here, where his ancestors were slaves and he once worked the fields as the son of sharecroppers at River Lake Plantation in Pointe Coupee Parish.

“I used to write for the old people on this plantation, the same place we’re sitting right now,” Gaines said. “This is the same land my people have been living on for five generations, right here. Right here in this place.”

In the backyard is the restored schoolhouse and chapel building from his childhood. Across the street is the camp on the False River where Gaines writes.

At 81, Gaines moves slowly and deliberately, a walker steadying his steps.

He walked miles a day at Girard Park when he was writer-in-residence at the University of Louisiana at Lafayette, from 1981 until he retired in 2004. During those years, he wrote the critically acclaimed novels “A Gathering of Old Men” and “A Lesson Before Dying.”

For the past four years, he’s been working on two novellas, “just a little bit at a time.” Their working titles are “Daughters of the Creole Lady,” and “The Man who Whipped Children.”

It took many years for Gaines to become one of the most influential writers of African-American and Southern literature. It took many more for his family, friends and neighbors to understand his need to write.

“They all thought I was nuts because hardly any of them had read a book, a novel. Back in a place like this, you read the Bible,” Gaines said. “Nobody in the country had books.”

At age 15, Gaines moved to the San Francisco area, where his mother and stepfather lived for high school. African Americans were barred from the public high school in Pointe Coupee Parish.

California’s libraries captivated Gaines, but he found no books written by or about Blacks. That’s when he began the first version of “Catherine Carmier.” He sent it out.

Gaines focused on school, served in the Army and enrolled in San Francisco State University, publishing short stories in the university’s literary journal. He earned a spot in Stanford University’s graduate program for creative writing, then got an apartment, writing short stories while working odd jobs.

A mentor told Gaines that publishing a novel was the only way to get a collection of stories published or to make money as a writer.

“The only novel I could think of is what I had tried to write about 10 years earlier,” he said. “And of course, I’d burned the draft I sent to New York.”

Gaines started over on “Catherine Carmier,” the love story of a dark-skinned Black man and a light-skinned Creole woman in a Louisiana countryside where Blacks, whites, Cajuns and Creoles coexist in a complex way.

He struggled with it, finishing after a six-month trip to Louisiana in 1963.

Gaines said his 1948 move to California and his 1963 trip back home are the two most important dates of his life.

“I had to go for education, but I had to come back here to be the writer that I am today,” he said. “The body went to San Francisco but the soul stayed here.”

Published in 1964, “Catherine Carmier” received favorable reviews but did not sell well.

Gaines kept writing, even though teachers, family members and even editors discouraged him.

“I just always said I was going to write,” he said. “Had I not succeeded, I don’t know, suicide?”

Although “Catherine Carmier” isn’t among Gaines’ most celebrated books, later works reflect its themes and characterization.

It was an important step, said Matthew Teutsch, interim director of the Ernest J. Gaines Center on the UL-Lafayette campus.

Many of Gaines’ first-edition books and original manuscripts are at the Gaines Center, a place for scholars to study his work.

Gaines says he appreciates being recognized while he can enjoy it.

“A famous artist once said that they always gave artists a steak after he had lost all his teeth,” he said. “And I still have mine — most of mine — and so I enjoy the steak now. I’m enjoying the steak very much now.”

Friend and literary scholar John Lowe is about a year into a biography of Gaines, and expects to take two or three years more. Gaines only recently wanted a biography, said Lowe, who will speak about Gaines at a Nov. 21 event in Lafayette to celebrate the first novel’s 50th anniversary.

“The people in Lafayette and Baton Rouge and Louisiana in general need to be very proud of our greatest living writer and the honor he has done to Louisiana and the South and this nation in terms of telling a story that goes to central issues of the human condition,” Lowe said.

Gaines spends a lot of time these days with those around people with whom he grew up.

Although much has changed in south Louisiana and nationwide during Ernest Gaines’ lifetime, he said some of the “same old, sore, cancerous ideas” of racism remain.

When people ask Gaines to write a sequel to “Catherine Carmier,” he tells them the sequel is his marriage to a Creole from New Orleans.

They met at a folk festival in Miami, where Dianne Gaines worked as an attorney. She told Gaines he was her favorite African-American male writer.

“I think some things have changed, but other things remain the same,” Gaines said. “You have a lot of racism and prejudice here, but I live in this place here.

“I could have never owned something like this place here 50 years ago, or even 30 years ago. People wouldn’t have allowed it.” — (AP)