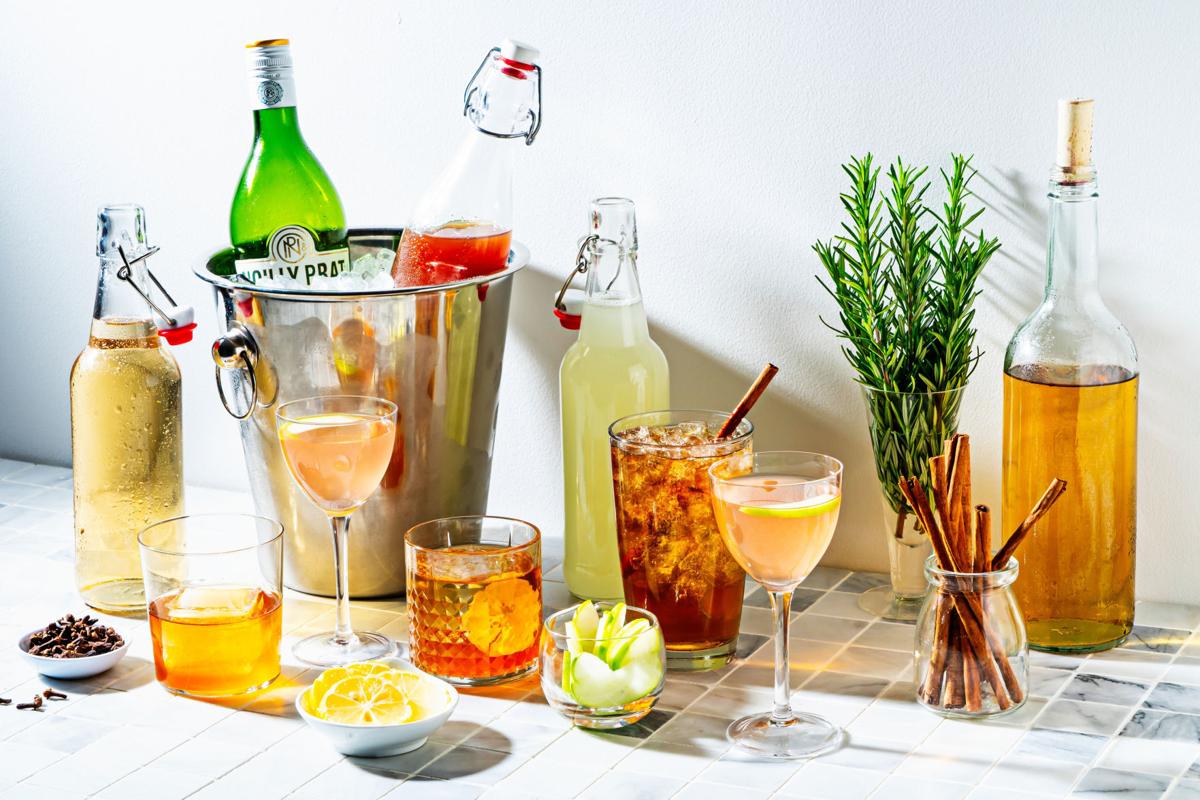 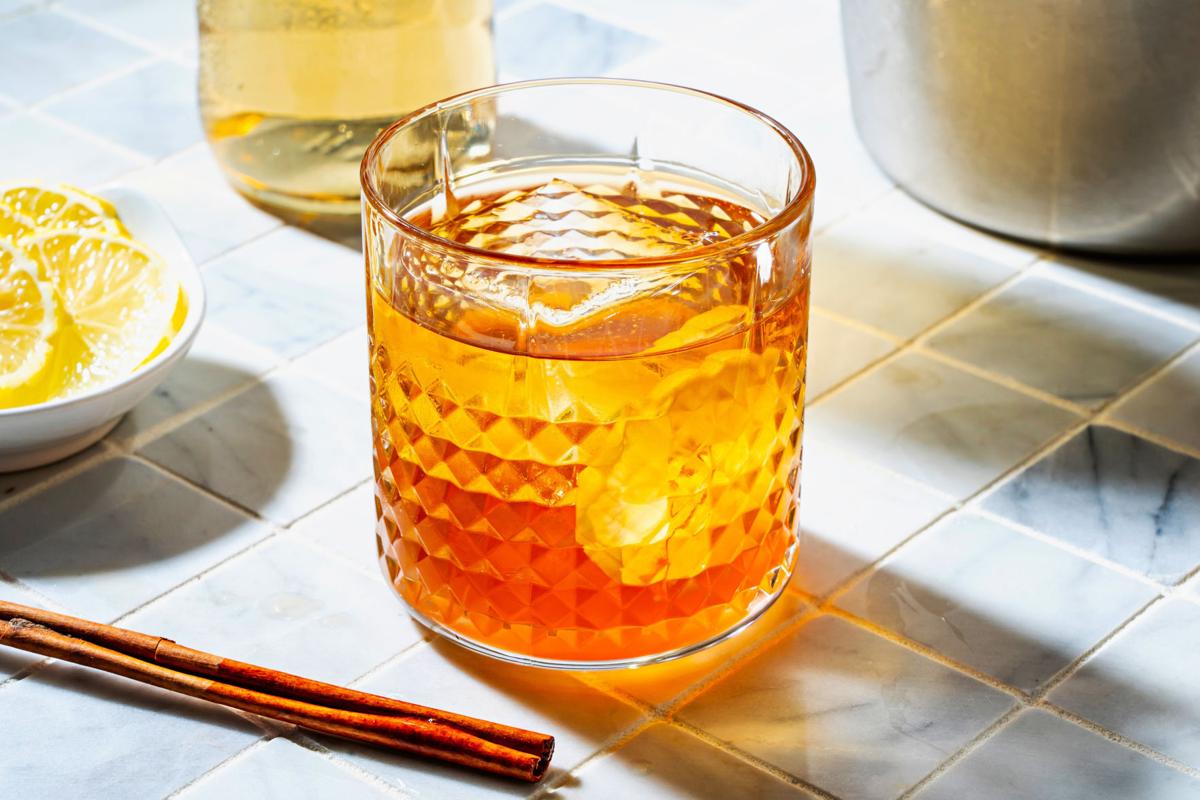 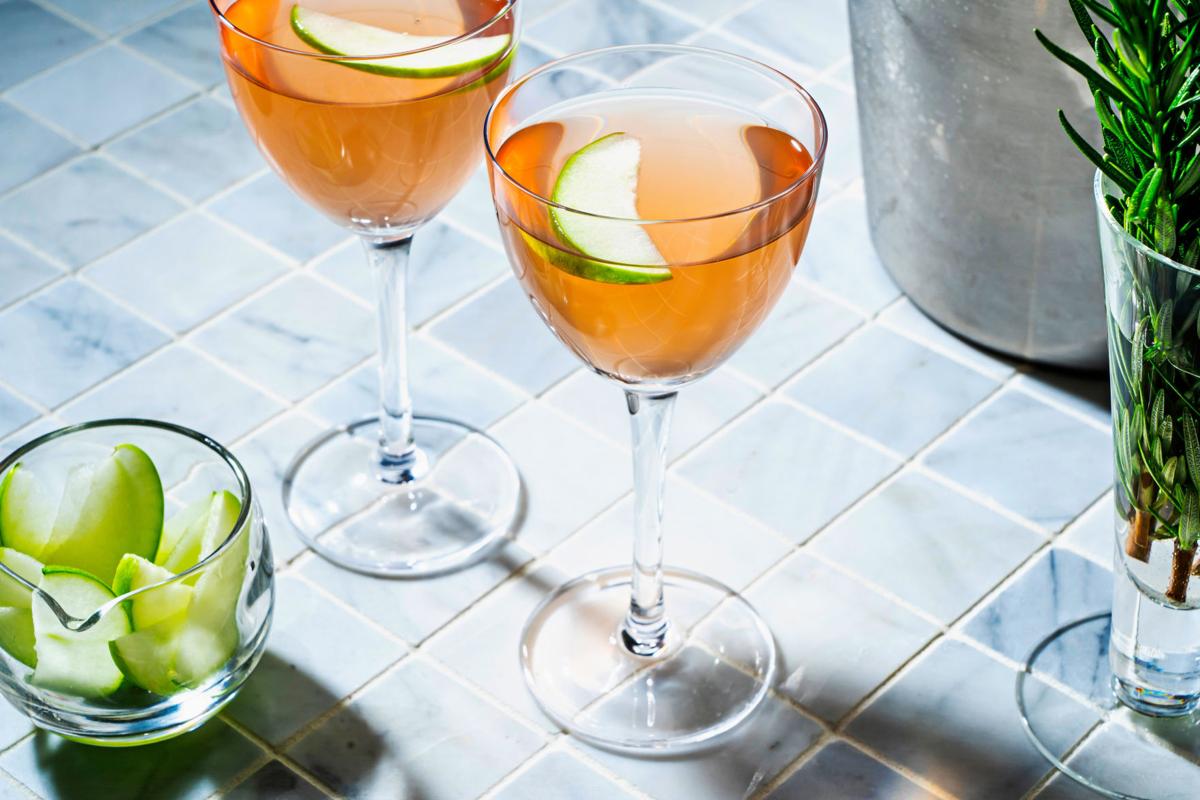 When I was a kid, apples seemed to come in only two types: red or green. I came to regard the so-called Red Delicious as Red Bland and Mealys, a fruit to avoid entirely, unless I needed something to throw at the neighborhood bully.

Then at some point Golden Somewhat More Delicious started showing up here and there, and later on Galas, which had a crispness I’d previously only encountered with Granny Smiths, and then over the past decade or so, all of a sudden there were others: Fujis and Pink Ladies and Honeycrisps, wooing me back to apples of warmer skin-tones. Over time, even the commercially available apple juices have diversified — our local grocery store now carries not only that amber shelf-stable juice box version we grew up with, but multiple fresh juices and ciders, some made with single varieties of apple.

This is a huge boon, as crisp, cold fall weather begs for the season’s iconic fruit. This past weekend, I whipped up a batch of spiced cider and combined it with bourbon, and drank it hot around a bonfire at a farm with friends, the golden autumn leaves swirling around us. If I’d only had the presence of mind to recruit a college football team to warm up nearby and sprinkle some pumpkin spice into the flames, we might have managed some sort of Autumn Stereotype Singularity and all disappeared in a flash of cinnamon-scented fleece hoodies.

Just around the corner is Thanksgiving, our annual American Festival of Overdoing It, and here apples can do heavy lifting beyond their presence in pies. Between the many wonderful alcohols made from apples (applejack, brandy, hard cider and so on), the nonalcoholic juices and ciders and sodas, and the multitude of other liquids that mix beautifully with apple, you could satisfy most every palate at Thanksgiving — from the sweet-toothed to the no-sugars, the teetotalers to the tipplers.

I’m highlighting two recipes here, one big and boozy, one light and crisp, but I wanted to make sure to include nondrinkers: The spiced cider syrup is highly flexible and can as easily flavor a nonalcoholic drink as it does the Old-Fashioned riff here. Try a few ounces mixed with iced tea, a spicy ginger ale, or a sparkling nonalcoholic wine or cider. (It does call for Angostura bitters, which are alcoholic, but they make up a small proportion of the recipe, and the alcohol is further reduced by the cooking process. However, if even a trace of alcohol is a concern, you can instead add two toasted cinnamon sticks, a half teaspoon each of toasted allspice berries and cloves, and a teaspoon of grated fresh ginger to the cider and brown sugar as it reduces to syrup. Just strain out the solids before bottling.)

The real beauty is the Eve, a gorgeous, lower-ABV drink that Audrey Saunders, founder of the much-missed Pegu Club cocktail bar in New York City and a major force in the cocktail resurgence, made for the bar’s opening in 2005.

Having experienced good vermouth through travel in Europe, Saunders was trying to redeem its reputation in the United States, where the wine was still “viewed as the nasty, disgusting, funky, dust-coated bottle that sat in a dark space in the underbar,” Saunders emailed me. “Apples . . . have a fresh, crisp, uplifting smell, and the dry vermouth enhances every aspect of them in an incredibly seamless manner. Unlike a distilled spirit, the vermouth doesn’t wrestle or try to compete with their beauty — instead, the vermouth gets behind the apples and pushes its wonderful flavors forward.”

I’ve made the drink several times now, once with Fujis and another with a mix of apples, but only recently was I able to try it with Saunders’s preferred variety, McIntosh, which suddenly showed up at the store. Not only does their flavor work beautifully with the Noilly Prat Extra Dry that Saunders recommends, leaving the skins on the apple imparts a faint, beautiful sunrise blush to the drink, a delicate, complex sip that acts as a wonderful aperitif.

If you’re hosting Thanksgiving and busy trying not to incinerate the green-bean casserole, make it easy on yourself: Bring your guests into the fun and set out the components for them to mix with. You’ll be thankful to have one less thing to do as the hungry and thirsty hordes arrive.

- Prep the apple components in advance. The two recipes here can be made well ahead of the Thanksgiving feast, and the Eve must be prepped in advance to give the apples time to infuse. If you put them in to infuse on Sunday, they’ll be ready to go by Thursday’s meal. You can prep the spiced cider syrup at the same time, storing both in the fridge until service time.

- Meet the ice bucket challenge. You’ll want to keep the vermouth and the syrup cold during service, and you’ll want a bucket full of ice for people to use in their Old-Fashioneds. If you’re just chilling those two bottles, a couple of ice buckets will do just fine, but if you also want to offer ginger ale or iced tea for non-imbibing guests to mix with the cider syrup, you’ll want a cooler or guest-accessible fridge nearby to keep those options cold.

- Give them the right tools and glassware. You won’t need anything complicated: a cocktail spoon, a jigger for measuring, cocktail and rocks glasses. While you can certainly provide a mixing glass for prepping the Old-Fashioneds, you can also get away without it: Guests can easily build this drink in a rocks glass. All they’ll need to do is add the ice and two ingredients, then stir the drink in the glass to chill and dilute.

- Guide your guests. Cards or bottle labels can tell guests how to use what they find. The Eve won’t require much explanation, but you may need to provide an assist for the spiced cider syrup. “For a Spiced Cider Old Fashioned: Fill a rocks glass with ice, then add half an ounce of spiced cider syrup and two ounces of apple brandy. Or, for a nonalcoholic treat, add an ounce of syrup to [whatever nonalcoholic options you’re providing].”

- Garnish with gusto. Offer a range of garnishes, letting everyone — no matter their age or alcohol preferences — get in on the fun. Try sliced lemon wheels, toasted cinnamon sticks and star anise, sprigs of rosemary and sage leaves, or dehydrated apple slices (sold at a number of major retailers, but you can also get them from garnish maker Blue Henry). A slice of apple can be pierced with cloves to garnish an Old-Fashioned, or you can use a cocktail pick to make a few thin slices into an apple fan for the Eve. Fresh apple slices will brown if left out for a while, but you can reduce this by brushing them with lemon juice.

Spiced cider syrup has many uses, including giving a twist to this classic cocktail. Use it to add an appley note to spicy ginger ale, lemonade, sparkling wine, or stir a few ounces into club soda and garnish with a sprig of rosemary. Use it to sweeten tea — or even drizzle it over vanilla ice cream and apple pie. The drink itself is a simple riff on an Old-Fashioned; it works with bourbon as well, but keeping it all apple-based makes for a deliciously seasonal sip.

Make Ahead: The syrup needs to be made and chilled at least 2 hours before serving the drink.

Storage Notes: The syrup can be refrigerated for up to 2 weeks.

FOR THE SPICED CIDER SYRUP

1 lemon and/or apple wheel, for serving (optional, apple wheels may be pierced with cloves, if preferred)

In a small saucepan set over high heat, combine the cider, sugar and bitters and stir occasionally until the sugar dissolves. Bring to a boil, then reduce the heat to medium and cook, stirring occasionally, until the syrup is reduced by about a third, about 15 minutes. Remove from the heat and let cool completely, then strain into a bottle and refrigerate until completely cold, about 2 hours. You should get about 2 cups (480 milliliters). Makes enough for at least 30 drinks, or to use in other ways (see headnote).

Place the large ice cube in a rocks class and set aside. Fill a mixing glass with the smaller ice cubes, and add the brandy and the cider syrup. Stir to chill and dilute, about 30 seconds, then strain into the glass and garnish with the lemon or apple and cinnamon stick, if using.

This elegant apple-infused aperitif is a lower-proof drink from Audrey Saunders, founder of the now-shuttered Pegu Club in New York City. A mandoline can make short work of the apple slicing. Note that you need several days for the drink to infuse. Macintosh apples are Saunders’s recommendation, and they’re great here, adding a faint blush to the wine, but you can substitute other apples — try Fujis, Honeycrisps or another you like. Saunders makes this with a liter of Noilly Prat Extra Dry vermouth and eight apples, but it works with 750 milliliters and six apples. Adjust the volume as your guest list requires.

Make Ahead: The vermouth needs to be infused for 5 days before you plan to serve the drink.

In a quart-size (about 1-liter) jar with a lid, cover the cored, sliced apples with the vermouth, doing the best you can to submerge them in the liquid. Cover with a lid and refrigerate for 5 days, agitating the jar a little each day. (Save the original vermouth bottle.)

When the vermouth is infused, use a fine-mesh sieve to strain it into a bowl, pressing gently on the saturated apple pieces. Transfer the strained vermouth into the original vermouth bottle or your preferred pitcher, and refrigerate until ready to serve. Chill coupes or Nick and Nora glasses in the freezer for at least 10 minutes.

When ready to serve, pour the vermouth into chilled glasses, garnish each with a thin slice of apple, if using, and serve. (You can also set the vermouth out in an ice bucket so that people can serve themselves.)

Nutrition | Due to the infusion, a reliable nutritional analysis is not available.