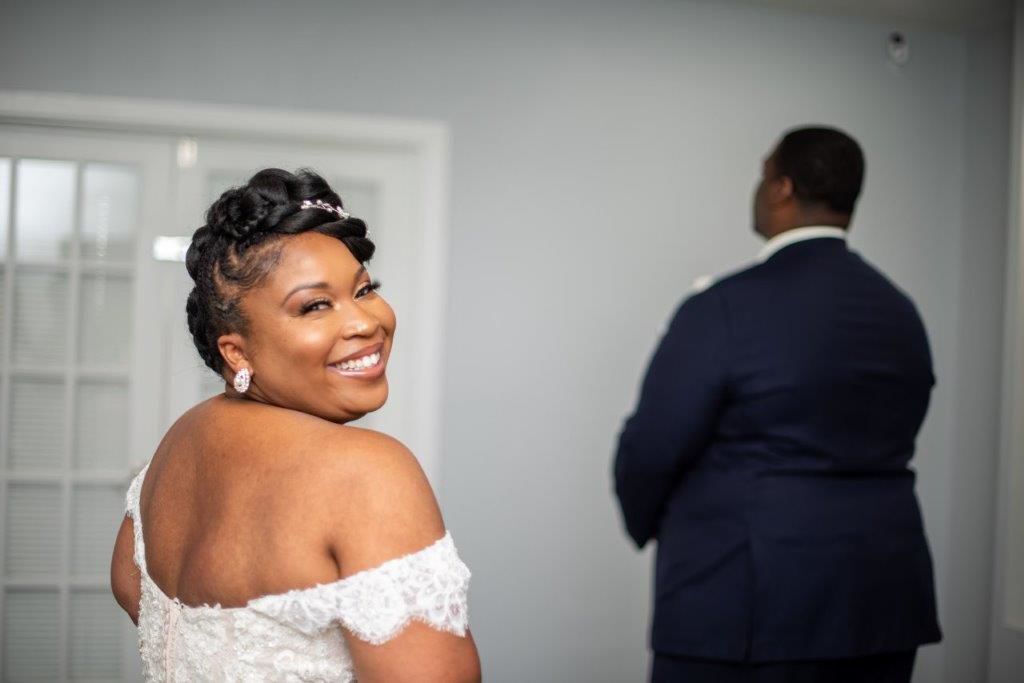 Lamar waits to get a sneak peek at his soon to be bride. 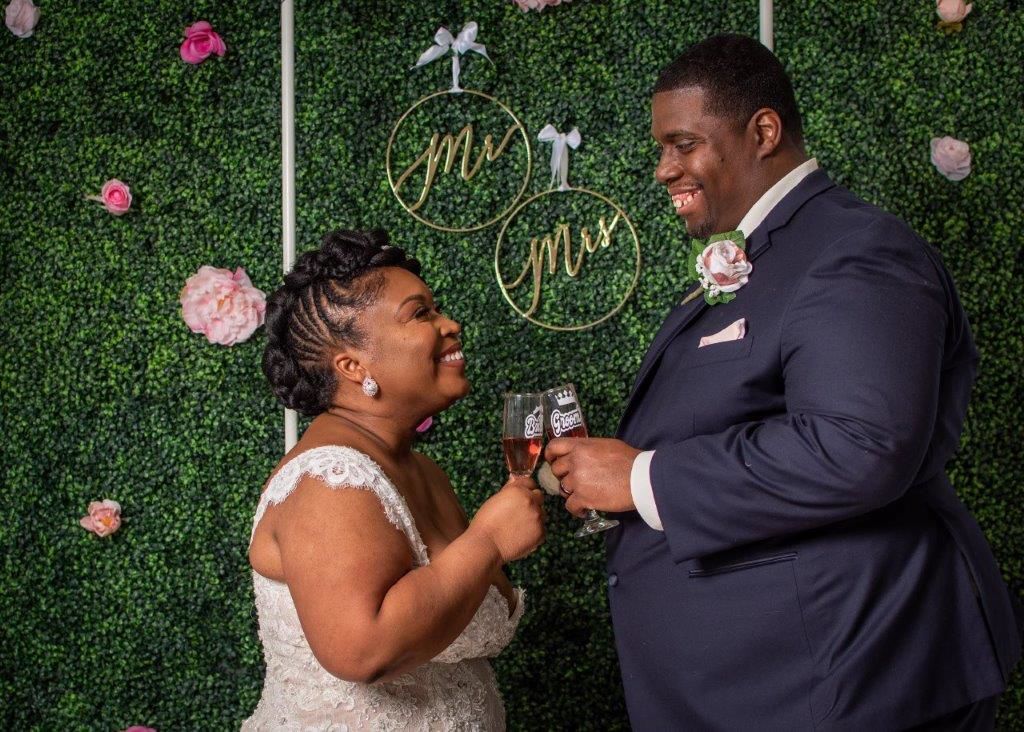 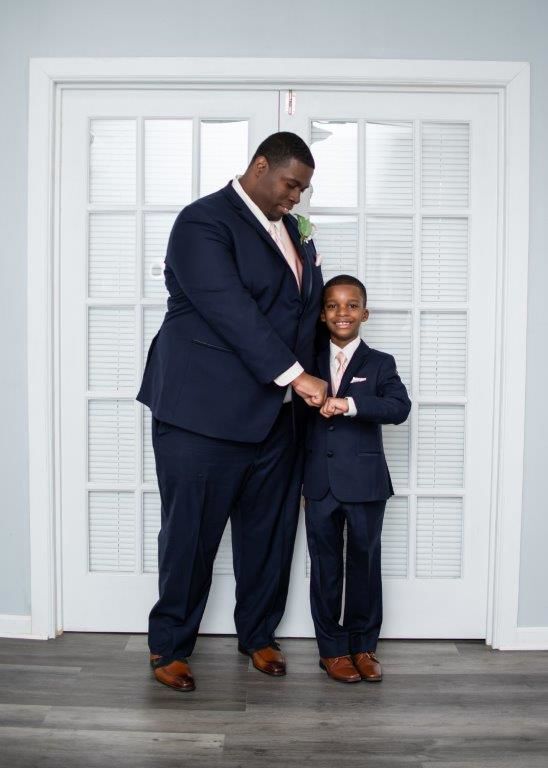 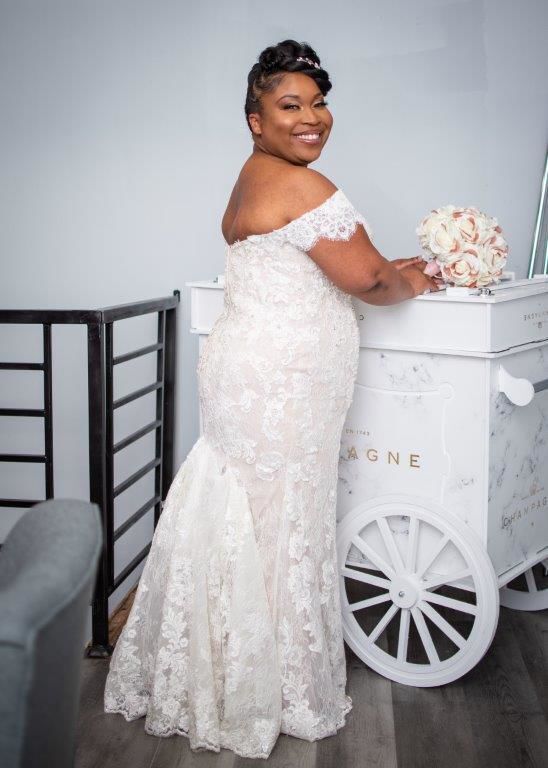 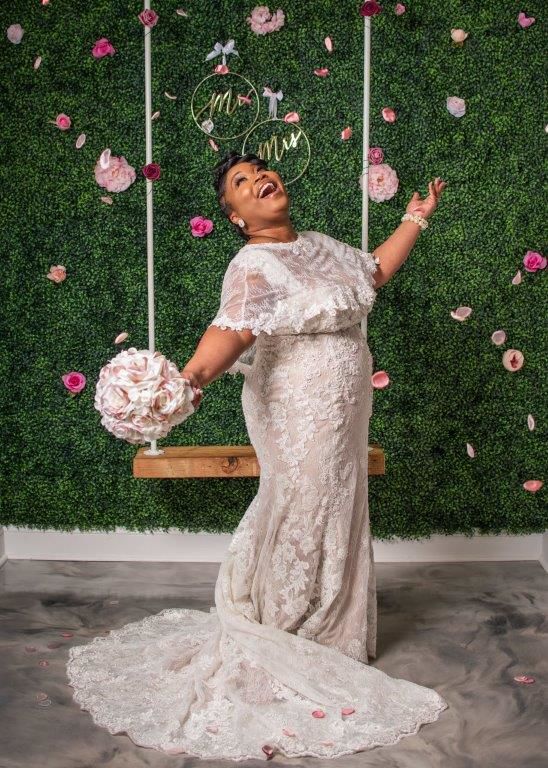 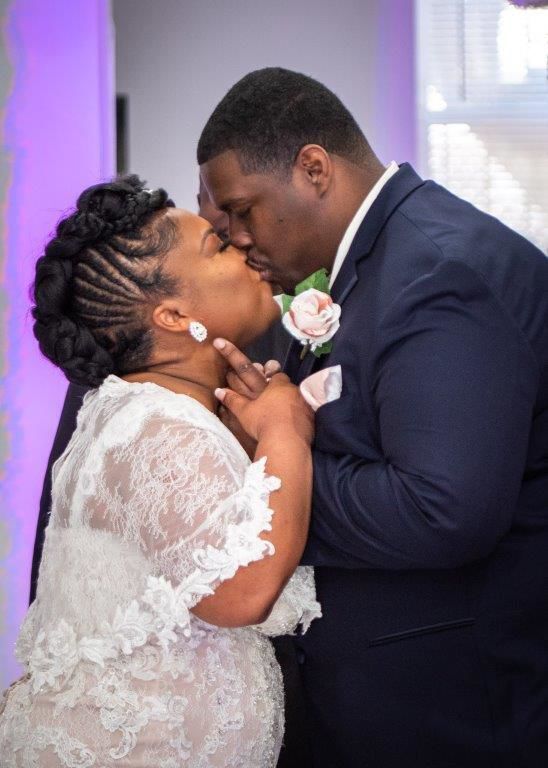 Trinity and Lamar share a kiss on their wedding day. 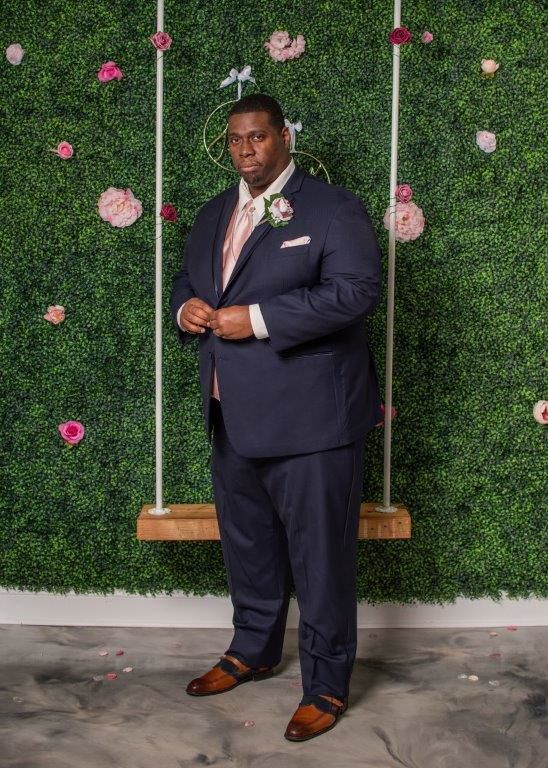 The groom poses for a photo. Photo: —Submitted/Rob Lay 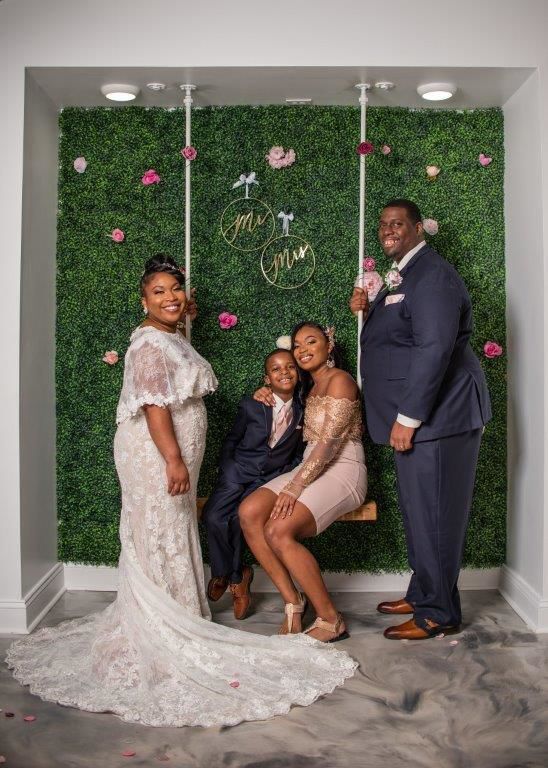 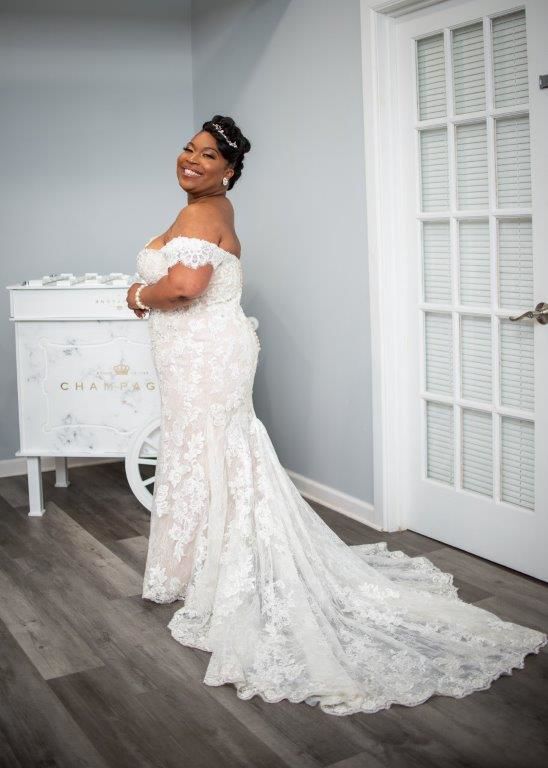 Trinity looked like she walked out of a fairy tale in her nude lined ivory lace gown dotted with floral embellishments and short swing train. Photo: —Submitted/Rob Lay 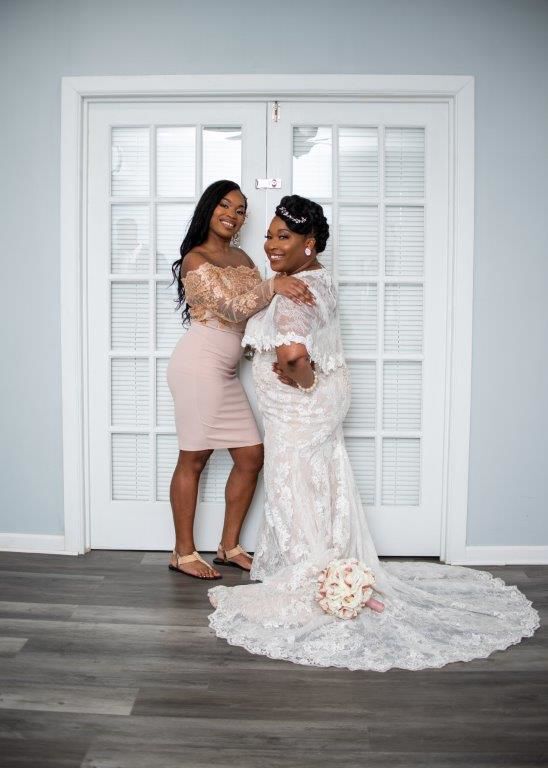 Lamar waits to get a sneak peek at his soon to be bride.

Trinity and Lamar share a kiss on their wedding day.

The groom poses for a photo. Photo: —Submitted/Rob Lay

Trinity looked like she walked out of a fairy tale in her nude lined ivory lace gown dotted with floral embellishments and short swing train. Photo: —Submitted/Rob Lay

The former Trinity Nicole McLain and Lamar David Douglas were married on March 22, 2021 at the Niambiance event space located in Northwest Philadelphia. The wedding colors were navy, blush, and rose gold. James March of Jay’s Creation Station coordinated the decor. The flowers were provided by Ramona’s Floral Designs. Rob Lay was the photographer and Joy Taylor was the bride’s makeup artist. The bride’s bouquet was a silk ivory floral arrangement with hints of rose gold and coordinated with boutonniere for the groom.

Trinity looked like she walked out of a fairy tale in her nude lined ivory lace gown dotted with floral embellishments and short swing train. She struck gold when she found her dream dress during her second attempt at wedding dress shopping. She said yes to the dress at the LaBella Donna boutique with her daughter and best friend in attendance. For the final fitting, she brought her mother along and they toasted the milestone with sparkling wine.

Trinity McLain is the daughter of Narrina Maldonado, Charles Hooker and Margaret Moore, who Trinity affectionately calls her “Bonus Mom”. She credits all three of her parents for depositing gems that have shaped her into the woman she has become.

The bride is the proud mother of two children, Zayah McLain who is 20 years-old and six year-old, Trent Douglas. Trinity is a sister and a niece who considers herself a confidant that cherishes all of her roles and relationships. Trinity loves God and says that she strives to be the very best person that God wants her to be.

The West Chester native started her journey as a single mom in college. She is very proud that her life has come full circle. She is a hospitality professional and currently works at her alma mater, Cheyney University, as the Food Service Director.

Lamar Douglas is the son of Walter Henry Miller and Annie Marie Douglas. He is a Southwest Philadelphia native and one of three children. Lamar’s father worked at Presbyterian Hospital for 30 years before retiring and his mother worked at various kindergarten and elementary schools until she couldn’t work anymore.

Lamar is the first in his family to graduate from college. He is a Cheyney University Alum and as a football captain in college, he made it to all-star teams in football at every level. Lamar also became a member of the Omega Psi Phi Fraternity, which he refers to as the greatest fraternity on the planet, Incorporated, Spring 2009. The groom enjoys traveling to new places. He’s a big foodie and loves trying different foods. He enjoys puzzle games of all kinds and everything about football. He’s a huge Lions fan.

The couple got engaged on March 22,2014. The combination of experiencing a pandemic, surviving COVID and turning 40 changed Trinity’s perspective on continuing to remain unwed. On LaMar’s birthday this past January, Trinity bought her husband’s wedding band. They decided that they would preserve their engagement date and get married on March, 22 2021, even if it was a Monday.

According to Douglas’, it was an elopement. They invited their parents,Trinity’s brother, Lamar’s sister and the bride’s best friend, who she refers to as BFFEWWO (best friend forever even when we’re old), to witness the union alongside their children. The bride’s dear college and friend, Christopher R. Hannah, was their officiant and counselor.

Although they both attended the nation’s oldest HBCU, Cheyney University, that is not where they met. The lovely couple actually were hooked up on Facebook. They say that the jury is still out on who reached out to who first on FB Messenger, however, they both agreed to meet up.

Their first date was in West Chester, at a hookah bar, which resulted in an arrest. That first date led to a second date in Philly, which ended in the emergency room. For the third date they decided to play it safe, get ice cream and walk to Penns Landing. As they reflect on the beginning of their relationship, the two described those days as organic and easy as Sunday morning. Through the assistance of SEPTA and Groupon, they continued to date and balled out on a tight budget. Trinity says that the stars were always aligned for them and it was very clear that they deserved each other.

Lamar planned a surprise engagement party for the proposal. He rented out a venue and invited our friends and family. Maggiano’s catered the event (where they both worked at during that time). Trinity thought that she was going to her cousins surprise birthday, which she was very reluctant to go because she had been sick all week. After a little begging and a new bottle of perfume, she was persuaded to go. Upon her arrival to the venue, their daughter darted up the steps to warn everyone that Trinity was there. The guests immediately got quiet, which drew her suspicion and then she began to cry as Lamar got down on one knee. He popped the question, she said yes and still continued to cry. They later announced to their guests that they were expecting.

Due to COVID-19, they are planning to celebrate with friends and extended family when they can safely come together, whether that is within the next year or five years from now.

The Honeymoon was in New Orleans,LA. or in Trinity’s words, “Nola Baby!” The couple donned masks that said “Just Married” while they traveled. Thanks to those masks, and the airline, they were upgraded to first class where they drank champagne. During their time in New Orleans, they enjoyed the most delicious food and met some of the nicest people.

“While creating a playlist for our wedding day, I was asked by several people what our song was, my response was all of them. It feels so good to have this once-upon-a-time fairy tale love. It’s the consistency for me. My husband recently gifted me a charm bracelet. The bracelet consisted of my new initials and a NOLA charm. He said that he wants to continue to add the places we travel together as husband and wife.”

“Marrying my wife was hands down one of the easiest decisions I ever made in my life. One moment that stood out to me was on our wedding day, upon my arrival, her best friend handed me a small box. In the box was a handwritten note from my wife that read, ‘I am so proud and in love with you and I can’t wait to be your wife!’ That little note meant the world to me and I currently keep that box and note near my work station so I can always easily retrieve it and reflect on it.”

“Together we start every day as husband and wife in prayer. We are very proud of our journey through love. Our partnership is our glue, we still love liking each other.

The Philadelphia Home and School Council hosted a virtual fathers forum, aimed at providing a safe space for men to discuss prevalent issues, …