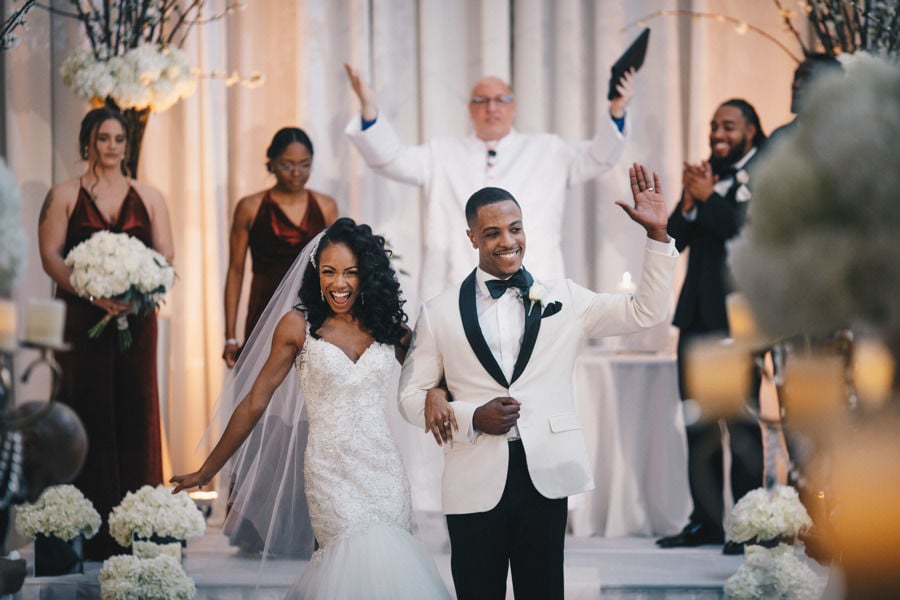 Those in attendance cheer on newlyweds Jemila Aziza Worley and Austin Howard Medley. 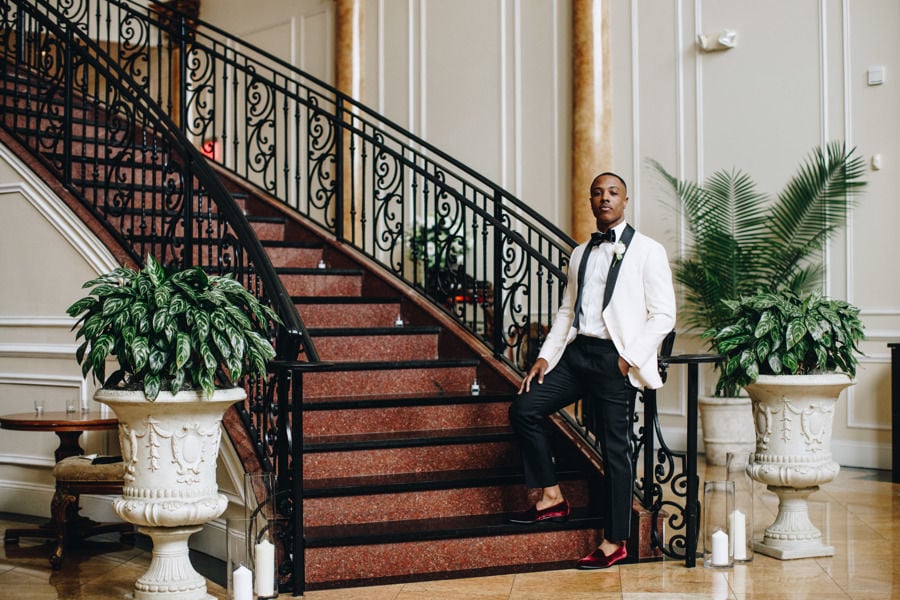 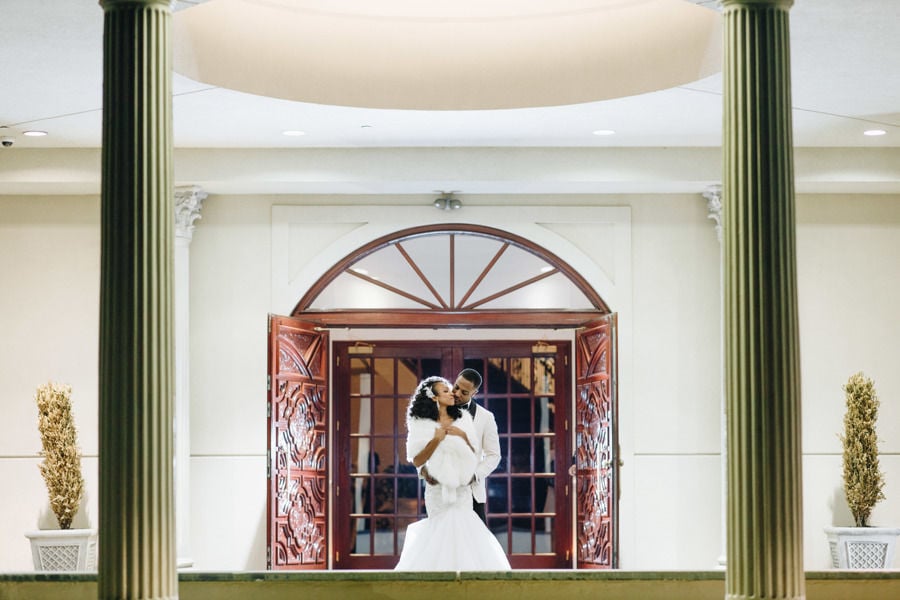 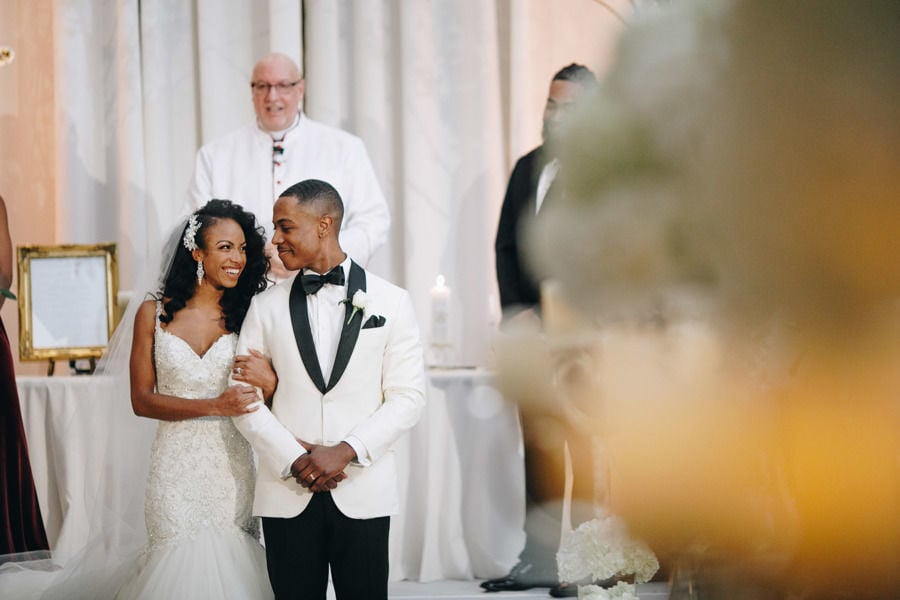 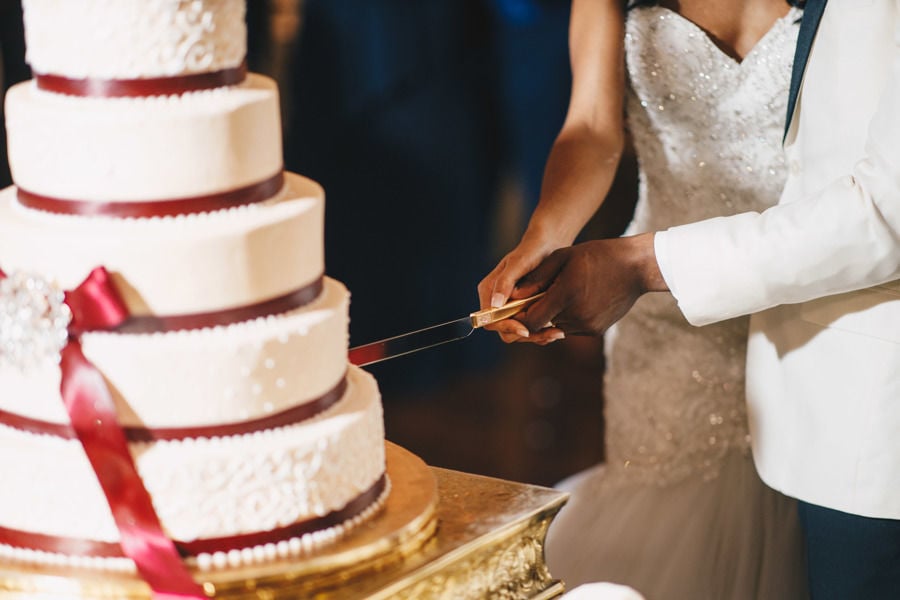 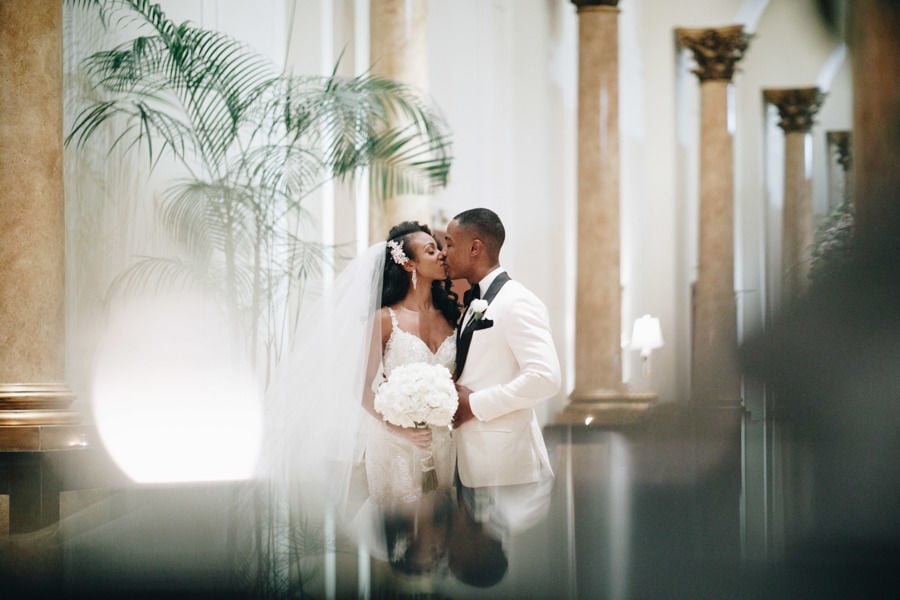 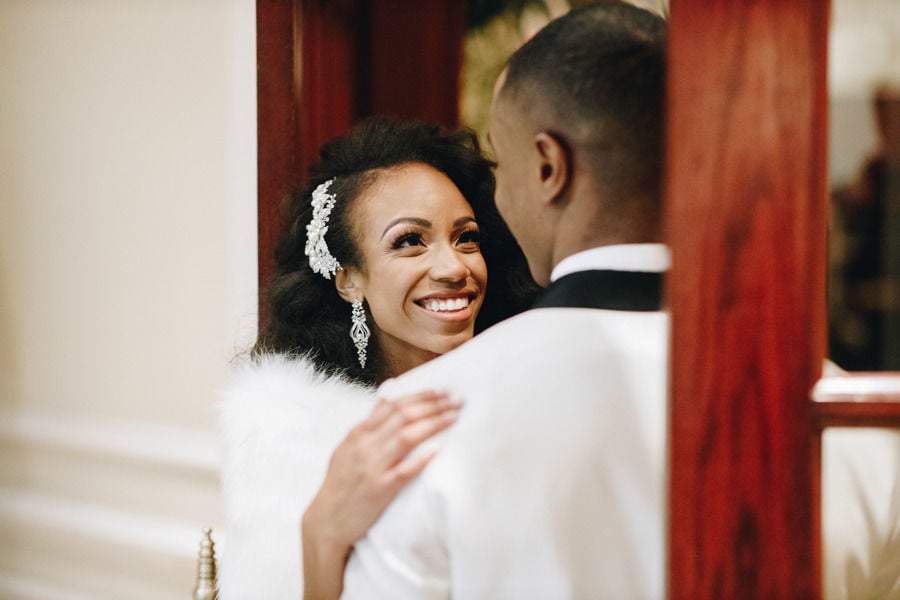 The bride, Jemila Aziza Worley, is studying to become a registered and licensed occupational therapist. 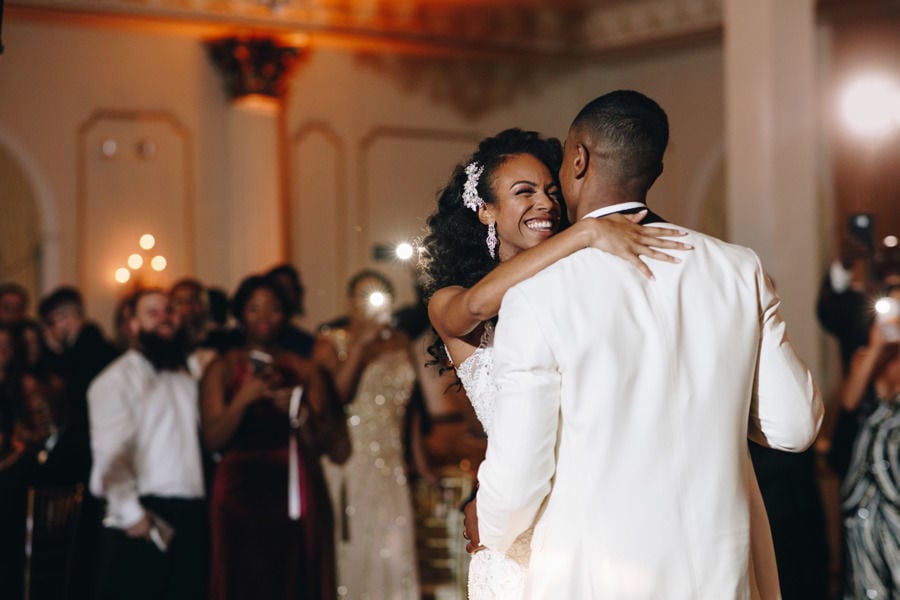 The couple will honeymoon in Ocho Rios, Jamaica. 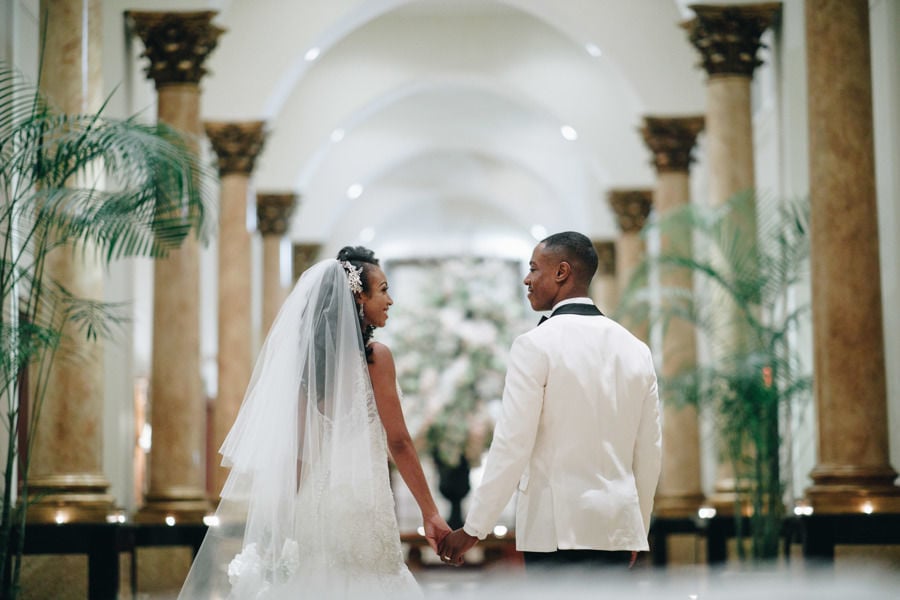 Those in attendance cheer on newlyweds Jemila Aziza Worley and Austin Howard Medley.

The bride, Jemila Aziza Worley, is studying to become a registered and licensed occupational therapist.

The couple will honeymoon in Ocho Rios, Jamaica.

The former Jemila Aziza Worley and Austin Howard Medley were married in a formal evening wedding March 7, 2019, at The Merion in Cinnaminson, N.J.

Pastor Glenn DeShields was the wedding officiant. Jemila was given away in marriage by her parents. She was stunning in her bridal gown by Maggie Sottero of Kleinfeld Bridal. The ivory mermaid style gown with a beaded lace bodice and appliqués accented with Swarovski crystals was perfect. The bride carried a bouquet of white roses and hydrangeas hand-wrapped in gold and white toile.

Jemila Worley, 25, (Absecon, N.J.) is the daughter of Ericka L. Chapman and Willie Worley Jr. Atonia Worley is her stepmother. Jemila graduated from Stockton University where she earned a bachelor’s in psychology (2015) and her master’s in occupational therapy (2018). She is studying to become a registered and licensed occupational therapist in Texas where the couple now reside. She is a trained dancer and was an NBA dancer for the Philadelphia 76ers. Aside from dance and occupational therapy, Jemila is a singer and spends her leisure time writing Christian music.

Austin Medley, 26, (Franklinville, N.J.) is the son of Biddle R. Medley Sr. and Kathleen Medley. Austin Medley is also a South New Jersey native, living in Dallas, Texas. He is a senior technical recruiter for Mondo, where he does executive search and consulting for IT, Tech and digital marketing staffing. Austin is a Villanova University graduate and former member of the Villanova football team. Austin graduated from Villanova in 2015 with his bachelor’s in sociology and minor in philosophy. Austin is a former member of the Philadelphia Big Brothers Big Sisters Organization, and continues to remain actively involved in South Jersey, Philadelphia and Dallas, Texas.

The couple met, when Jemila was a dancer for the Philadelphia 76ers after a game in January 2016. Her teammates really wanted her to join them to celebrate a co-worker’s birthday. Jemila was hesitant, not one to go out, especially after a long workday. However, her best friend and teammate insisted that I come for “5 minutes” which ended up being two hours. She recalls, “While sitting in the VIP lounge with my teammates I felt someone lurking behind me. It was an old friend from high school who I hadn’t seen since graduation. We began catching up and before leaving, my friend asked if I was dating. I said no. Seconds later Austin introduced himself. Then I find out he played football with my friend at Villanova and they were moving in together in Philadelphia. We talked for a few minutes and then he gave me his number to text him if my friends and I ended up going out anywhere else in Philly. I pretended that I was actually going somewhere else, knowing I was going directly home. So, I politely took his number and never texted him.

That night before going to bed I wondered if I could find Austin on social media and see him in a different light than the dark, strobe lights of the club. I searched until I found Austin’s Instagram profile and followed him. One week later, after not texting him and following his Instagram photos daily, messaged me and said how sad he was that he hadn’t received a text and invited me over to their new apartment for Super Bowl Sunday. I felt like such a jerk, I didn’t think he actually wanted me to text him. So, I apologized via message and then texted him so he had my number. However, I didn’t make an appearance at the Super Bowl Party. That was too soon.

The next week he invited me over for parties and get-togethers at their new apartment and I denied every invitation, until Valentine’s Day 2016 he texted me and invited me over and I accepted. He had a rose for me. We sat on the couch and watched the NBA All-Star Game. That night when I left to go back to my apartment, I said to myself “Jemila, you just met your soulmate and you are going to marry this man.”

On my 24th birthday, July 15, 2017, Austin and I woke up in our Airbnb that he had gotten us for the weekend in Philadelphia. The entire week I asked “what are we doing this weekend? I need to plan my outfits.” He did not budge and stuck to the story that the weekend would consist of staying in an Airbnb, a dinner surprise on my birthday, and just hanging out. So, I let it go and just figured I’d go with the flow. Anyone who knows me, knows that I like to be in control of every situation and I like to have a plan ... this weekend, I had neither and for some reason I felt OK with that.

The morning of my birthday we went to breakfast and relaxed, and once the afternoon hit we were getting ready for the night ahead ... little did I know it would be so eventful! Austin pretended like we were going to dinner somewhere in Philly and that we were going to catch an Uber, all lies! Around 3 p.m. he said, “Our Uber is here” so we went outside of our Airbnb and as I’m looking for our Uber driver, a white limo is sitting outside of the house. Austin jokingly says, “Someone around here is fancy and got a limo,” I giggled and agreed ... then I realized we were the fancy ones walking up to the limo. The limo driver gets out, Austin opens the limo door and my best friend is sitting inside. I was hysterical, not understanding what was happening, Austin left me with my best friend and said he would see me later for dinner and to have fun with my friends. At this point I was just so confused I didn’t know what to expect. The limo drove us around Philadelphia and for the next hour we made two more stops to pick up my older sister and some more of my best friends, who all joined us in the limo. I was shocked! Especially since I had seen most of these people during that week and everyone played along so well. My friends still pretended like they had no idea where we were going, so this made me feel at ease knowing I wasn’t the only one who had no clue what was going on.

Two hours later, we end up at the Race Street Pier, took photos with my friends and as I was walking down the pier my best friend said, “Turn around, look there’s Austin.” I turned around and my handsome man was sitting on the bench under the Benjamin Franklin Bridge wearing a completely different outfit than I had saw him in a few hours before. He stood up, gave me a huge hug, and walked me over to the edge of the pier. He grabbed a hold of both of my hands, summed up how we both knew how we felt about each other since Day 1, got down on one knee, and asked me to marry him. While sobbing, I said yes. As we embraced with an enormous, heartfelt hug and kiss, I heard cheers and screams of familiar voices ... when I looked over his shoulder, I saw all of our family and close friends. My heart could have burst. Our favorite people were able to witness this incredible memory and I couldn’t have been any happier.

The proposal was followed by another surprise! We had dinner on the Spirit of Philadelphia cruise with all of our family and close friends, celebrated our engagement, my birthday, and lifelong love. I get goosebumps just thinking about that night and knowing that I married my soulmate.

The reception followed the ceremony at the same venue. All Around Entertainment (AAE) and our emcee, DC, our reception was the most lively and energetic event we’ve ever experienced. The reception room displayed ivory, gold, and champagne features, dressed with gold centerpieces, white roses and hydrangeas, cherry blossoms, and candles, finished with burgundy accents. The room featured live band, To The Max, that played throughout dinner, followed music by DJ Harrison, drapery, photo booth, and an ivory stage created and provided by, All Around Entertainment (AAE), with ivory and soft gold lighting. Our reception began with dancing and continued throughout the entire evening. The wedding party entered the reception room with joyous energy, immediately followed by the bride and groom who were lovingly huddled by all of their closest family and friends. They danced to “Living It Up” by Ja Rule.

The newlyweds will enjoy their honeymoon in Ocho Rios, Jamaica, shortly.

I am tearing up after reading the awesome, beautiful love story and wedding ceremony of Jemila and Austin Medley. Congratulations and many many blessings on your life together as husband and wife.💜

I had a great time! Thanks for letting me and Jimmy share such a blessed occasion with you both. It was so beautiful! I still can’t believe my lil Nephew is married. Love you two for life!