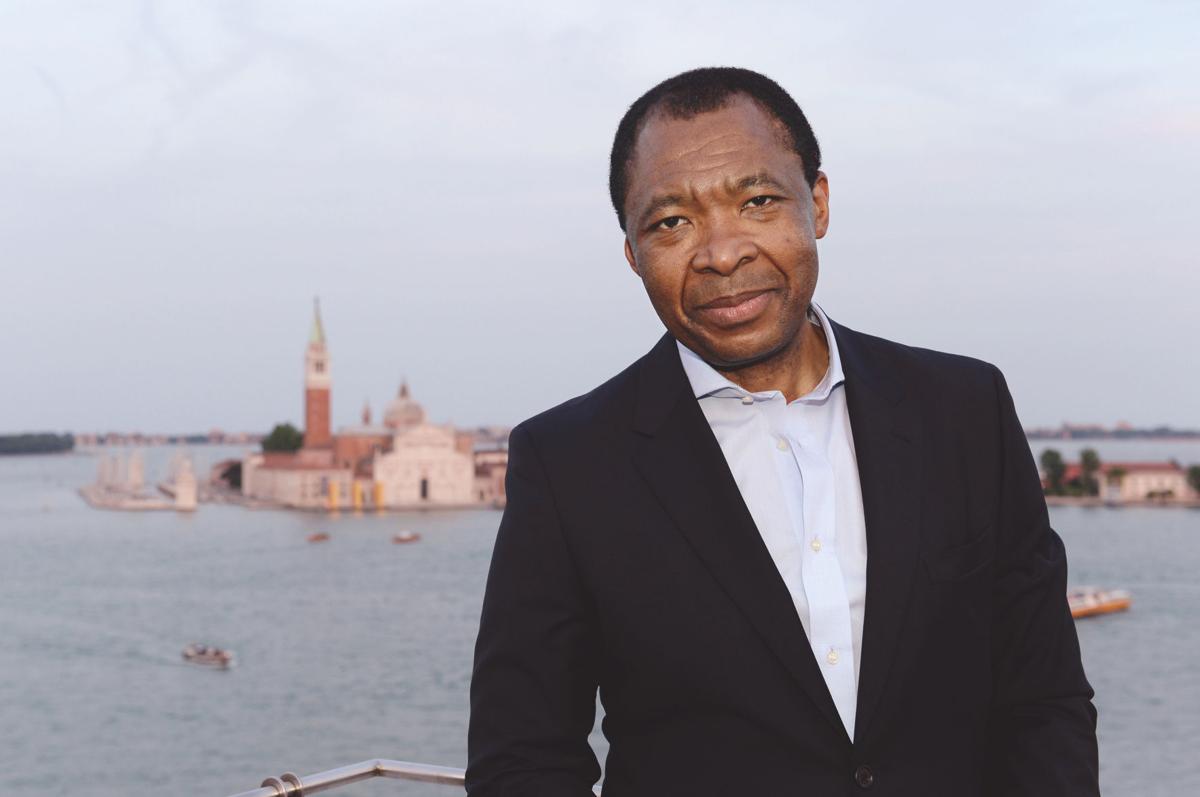 Curator Okwui Enwezor originally conceived “Grief and Grievance” in 2018, in the aftermath of a period that saw the nation’s first Black president, the death of Trayvon Martin, the rise of the Black Lives Matter movement and the murder of nine members of an African American congregation by a young white supremacist. 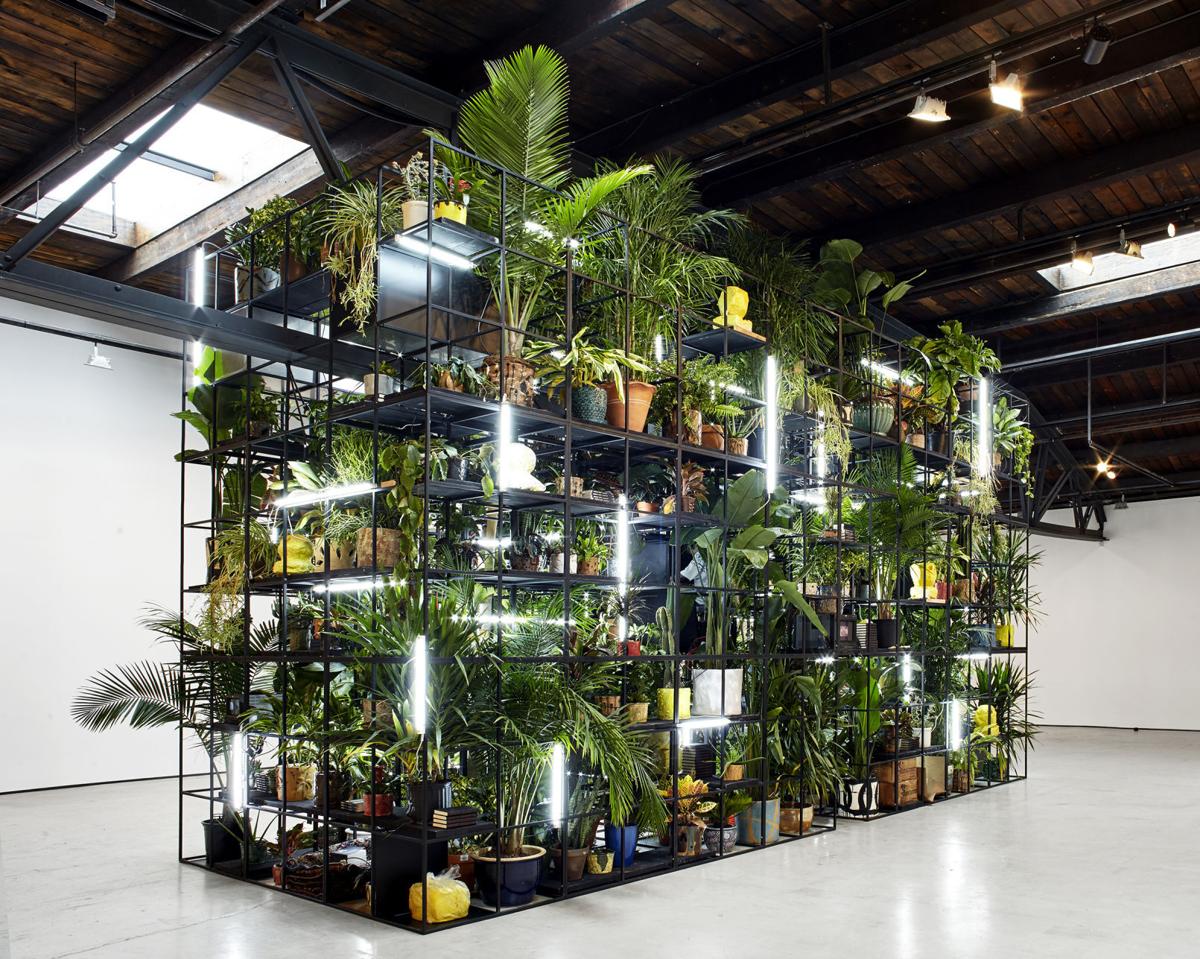 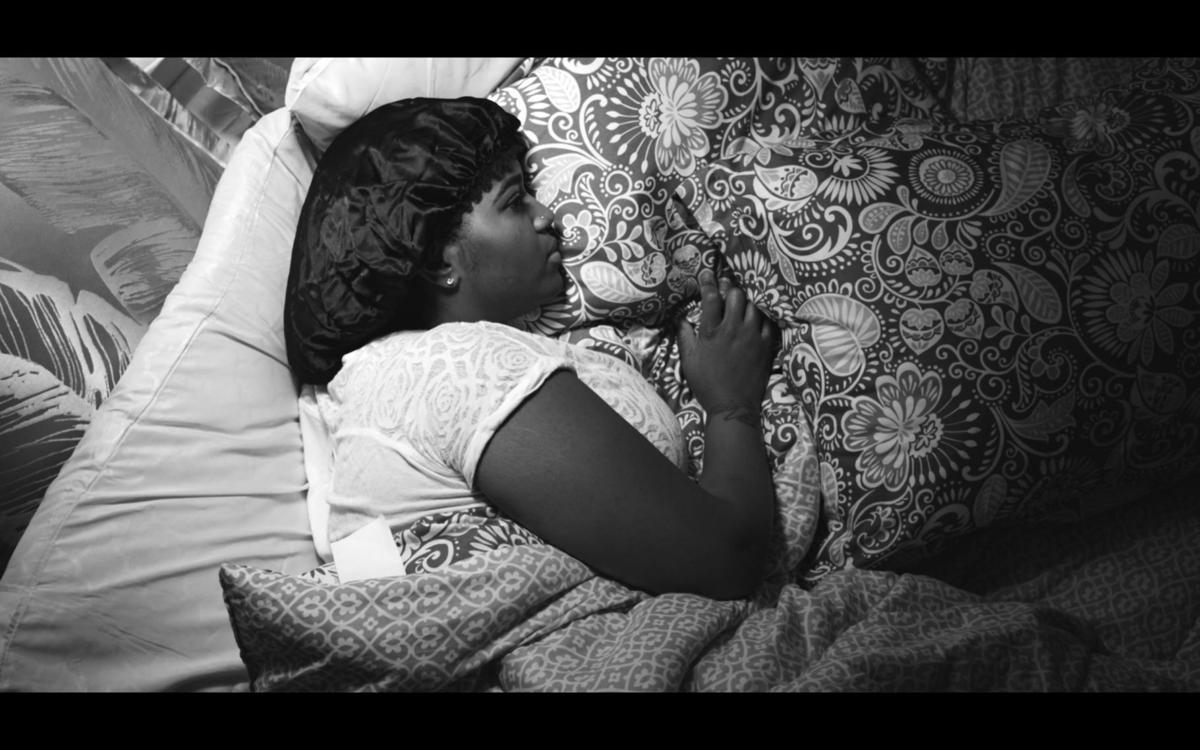 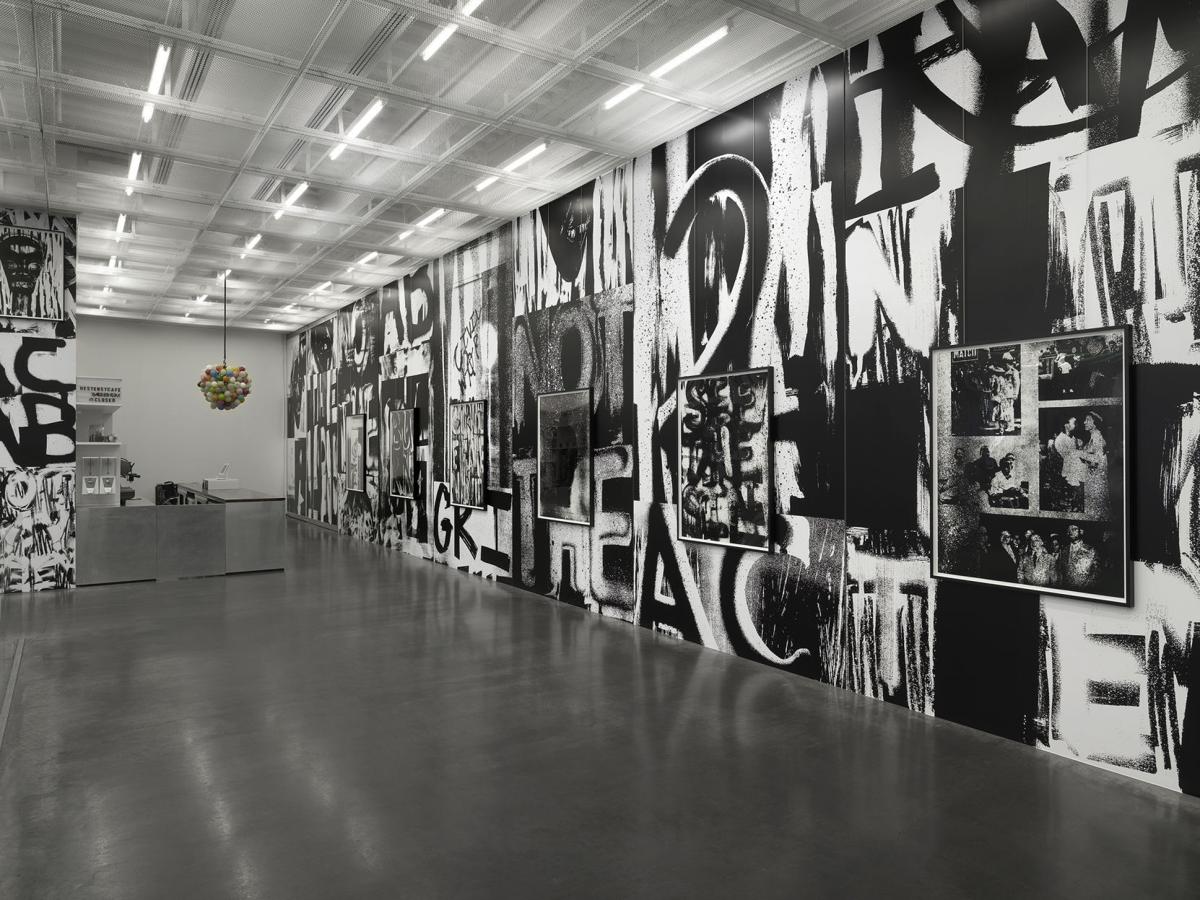 A “Grief and Grievance: Art and Mourning in America” installation by Adam Pendleton at New Museum in New York. —Dario Lasagni 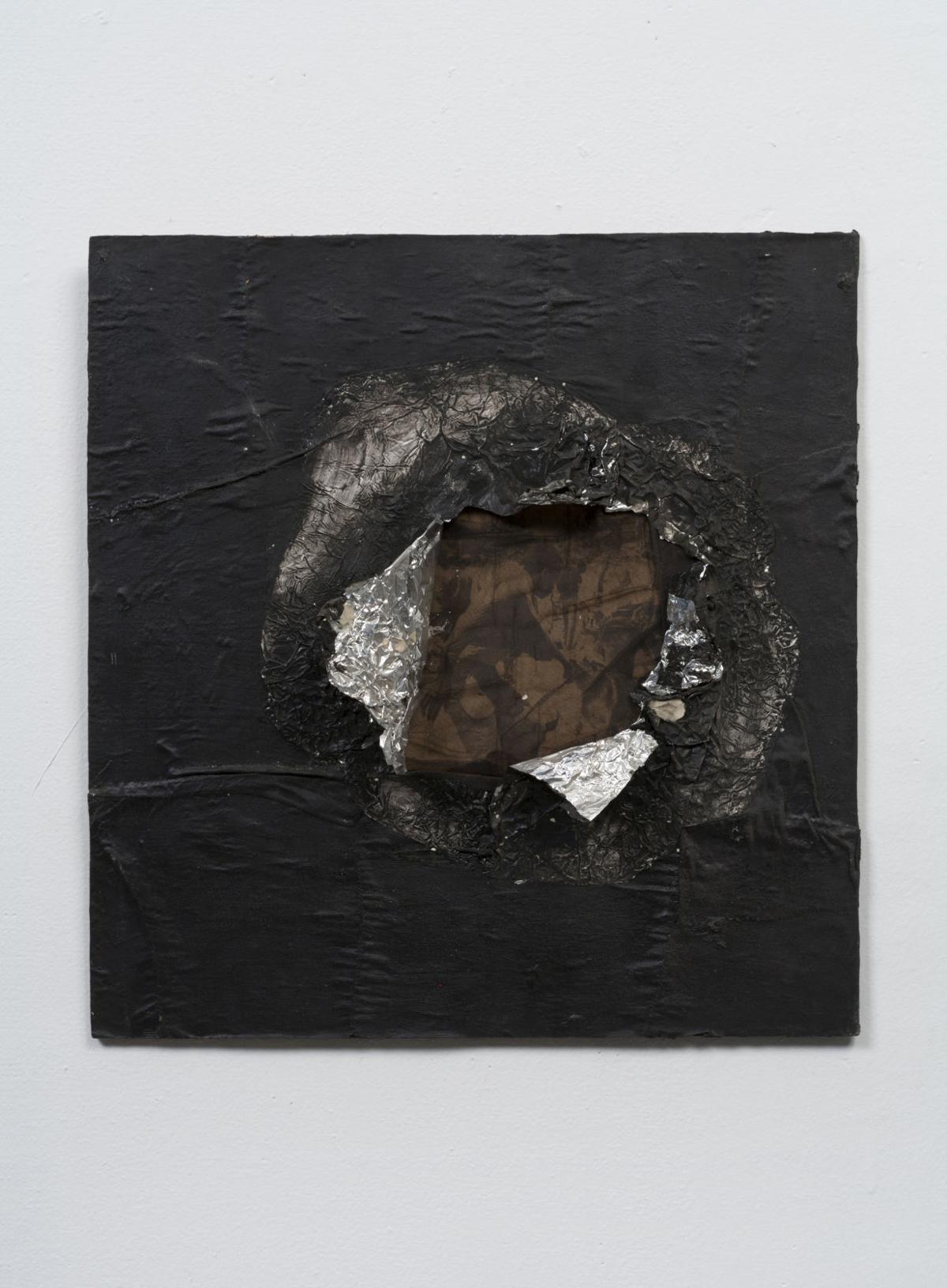 Curator Okwui Enwezor originally conceived “Grief and Grievance” in 2018, in the aftermath of a period that saw the nation’s first Black president, the death of Trayvon Martin, the rise of the Black Lives Matter movement and the murder of nine members of an African American congregation by a young white supremacist.

A “Grief and Grievance: Art and Mourning in America” installation by Adam Pendleton at New Museum in New York. —Dario Lasagni

NEW YORK — The most ambitious exhibitions help to usher in new ways of seeing. The Nigerian curator Okwui Enwezor, who died in March 2019 at just 55, specialized in these kinds of paradigm-shifting shows.

His exhibitions had a prescient feeling. If you saw them or even read about them, you knew you were seeing the shape of future conversations about art — and about who gets kudos for making it.

“Grief and Grievance: Art and Mourning in America” — the last show organized by Enwezor and his only one devoted exclusively to art by African Americans — feels retrospective rather than prescient. That makes sense, because the show, at the New Museum in New York, is about mourning, commemoration and loss.

Remarkable in its quality, emotional force and concision, it features work by many of this country’s most acclaimed Black artists — among them Carrie Mae Weems, Mark Bradford, Lorna Simpson, Kerry James Marshall, Theaster Gates and Kara Walker.

Enwezor originally conceived “Grief and Grievance” in 2018, in the aftermath of a period that saw America’s first Black president, the death of Trayvon Martin, the rise of the Black Lives Matter movement and the murder of nine members of an African-American congregation by a young white supremacist. After Donald Trump became president, Enwezor wanted to think through what he called the “crystallization of Black grief in the face of a politically orchestrated white grievance.”

He has done that and, at the same time, produced a show that is filled with musical invention, austere forms of abstract beauty and visceral expressions of joy.

Enwezor planned for the show to open during Trump’s first term. In case his cancer progressed, he had entrusted aspects of the project to the artist Glenn Ligon, who worked with curators Mark Nash, Naomi Beckwith and Massimiliano Gioni to bring the show to fruition. The catalogue was completed May 1, 2020, less than a month before the killing of George Floyd. The opening was then set back by the pandemic.

Trump is no longer president, and in 2021, many people — buffeted by so many crises on so many fronts — might not want to be reminded of the concatenation of traumas to which the art in the show responds. I don’t blame them. But the exhibition is polyphonic, layered and, in many ways, I think, cathartic. Beckwith told me last fall that she envisaged the show as “a form of collective therapy.”

The show’s cathartic potential is linked to its visceral immediacy: much of the art is either robustly made (Bradford, Nari Ward, Kevin Beasley) or plugged into the emotional directness of music (Arthur Jafa, Tyshawn Sorey, Kahlil Joseph). Its aura of hard-won wisdom emerges from the work of artists who take a long view, engaging with the civil rights era (Weems, Marshall, Dawoud Bey) or pulling us into more personal histories (LaToya Ruby Frazier, Howardena Pindell).

Several works on the ground floor generate their own little storm cells of energy. Adam Pendleton has covered the walls of the foyer with a dynamic, black-and-white collage dominated by large-scale lettering that evokes placards used during the summer’s Black Lives Matter protests. Hardly anything is legible, however. Pendleton is interested in the limits of language, the pressure it comes under from politics — sometimes buckling, sometimes achieving compact new kinds of poetry. The words in his collage are all cropped, appearing more like code or camouflage than clear-voiced protest.

You can walk from the foyer straight into a darkened gallery displaying Jafa’s “Love Is the Message, the Message Is Death,” a high-voltage, seven-minute film set to Kanye West’s “Ultralight Beam” (and a snippet of Cali Swag District’s “Teach Me How to Dougie”). Jafa’s montage interweaves often shocking instances of violence, abuse and abasement with moments of everyday beauty, footage of athletic prowess, spiritual transport and dance.

The impact is hectic and hypnotic, and very different from the quiet, poignant effect of Garrett Bradley’s “Alone,” a short, beautifully shot film about a single mother who, over the objections of her family, has decided to marry her boyfriend, who is in prison. The film has no resolution, and it speaks to what Bradley calls “the chronic possibility of separation” experienced by so many Black families in our era of mass incarceration.

When Enwezor spoke of the “crystallization of Black grief,” he was hinting at grief’s capacity to be converted into political action. But even when that happens — as it did after the death of Floyd — grief remains fundamentally a psychological phenomenon, private and profoundly destabilizing. The dynamic of mourning, what’s more, hinges on failure: our failure to bring the dead back to life, and our failure to communicate the effect of such loss.

The incommunicable thing at the heart of grief helps explain why abstraction is one of its most powerful expressions, and why so many artists in this show turn either to visual abstraction or to the abstractions of music and language.

A key artist is the late, great abstract painter and sculptor Jack Whitten (1939-2018), who is represented here by “Birmingham,” from 1964, the earliest work in the exhibition. It’s a tiny, unprepossessing thing made from black paint slathered over wrinkled fabric and aluminum foil. Near the center, the foil has been ripped open to reveal a photograph. Veiled by a transparent nylon stocking, it shows a young Black man being attacked by a dog during civil rights protests in Birmingham.

What was Whitten getting at? The work has a frustrated, thwarted quality. It might suggest a loss of faith in the power of abstract art in periods of political crisis — something like the moral conflict that led Whitten’s contemporary, Philip Guston, to abandon abstraction and return to figurative art.

But I think something more subtle is going on. Abstract art, like music, can communicate what cannot be put into words. Ligon sees a parallel between the music of John Coltrane — with its cascading sense of fury, outrage and grief — and what some Black abstract artists are trying to do. They are trying, Ligon told me in a phone interview last fall, “to get past the topical and into the spiritual.” Abstraction, he continued, “is about getting a little deeper into the soul of the country and expressing the inexpressible.”

Many works in the show play up the opacity of Black identity — all the ways in which stereotypes and assumptions fall short of representing actual experience and inner life. Rashid Johnson’s “Antoine’s Organ” is a massive structure of black scaffolding on which dozens of potted plants have been placed, along with lumps of Shea butter and copies of books by Richard Wright, W.E.B. Du Bois, Randall Kennedy and Paul Beatty. Sensuous, poetic, overwhelming, it simultaneously invites and mocks the idea of interpretation, safeguarding certain freedoms in the process.

Terry Adkins’s large-scale X-ray photographs of miscellaneous objects similarly suggest the ways in which our true selves elude markers of identity. His images riff on the southern Black tradition of “memory jugs” which commemorate the dead by attaching small, meaningful objects to the vessels’ exterior surfaces. The ghostly insubstantiality of Adkins’s images (which were made in response to the killing of Trayvon Martin) contrasts with Melvin Edwards’s powerfully congested wall sculptures — from a series called “Lynch Fragments” — made from welded steel chains, pegs and rods. But both artists sublimate grief into mute, fragmented forms.

The inability to share grief eventually becomes its own shared state — which is why we go to funerals. But even after it has “crystallized,” achieving some kind of critical mass, grief lingers. The part of it that cannot be processed is always tugging at us, pulling us away from community, from hope.

The issue then becomes one of translation. How do you translate mourning into community, music into politics, or vice versa?

Beasley’s hanging sculpture, “Strange Fruit (Pair 1)” is named for the well-known 1930s song, written by Abel Meeropol and made famous by Billie Holiday. Protesting the lynching of African Americans, the song helped kick off the civil rights movement. Beasley’s sculpture is a mangled-looking thing, composed of speakers, a microphone and a pair of Nike Air Jordans, all drenched in resin.

The show’s musical theme is pervasive. Tyshawn Sorey’s experimental 2018 album “Pillars” can be heard in a dedicated listening room. And besides Jafa’s “Love Is the Message,” there are two other videos with powerful musical elements.

One is Kahlil Joseph’s 18-minute film, “Alice (you don’t have to think about it).” A prelude to his mesmerizing 2017 film, “Black Mary,” it shows, in intimate, sometimes blurry close-up, the singer Alice Smith improvising in a recording studio. The film was made in 2016, not long after Smith had lost her grandmother and Joseph his brother, the painter Noah Davis.

The other video, called “Gone Are the Days of Shelter and Martyr,” is by Theaster Gates. It shows two Black men repeatedly slamming doors to the ground in a dusty old abandoned church in Chicago. Their rhythmic, Sisyphean actions are accompanied by blues singing and cello. The performance feels like a strange and electrifying new form of call-and-response.

Layered like a complex chord with overtones and undertones, Gates’ film gets more powerful every time I see it. Evoking both mourning and resilience, it combines deep cultural tradition with a sense of immediate cultural crisis. It is an emblematic work, nested inside an emblematic show, itself conceived by a much-mourned curator.