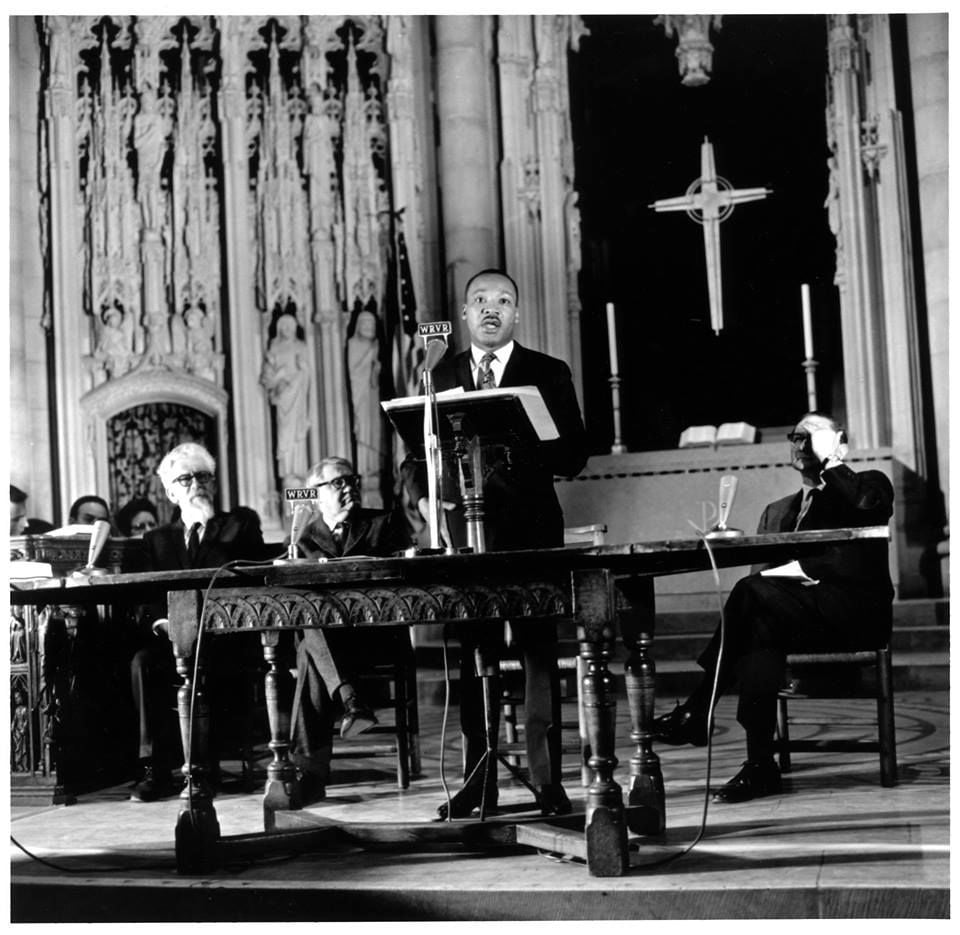 Martin Luther King Jr. stands in front of a congregation at Riverside Church in New York City to deliver his “Beyond Vietnam: A Time to Break Silence” speech. — Photo by John C. Goodwin 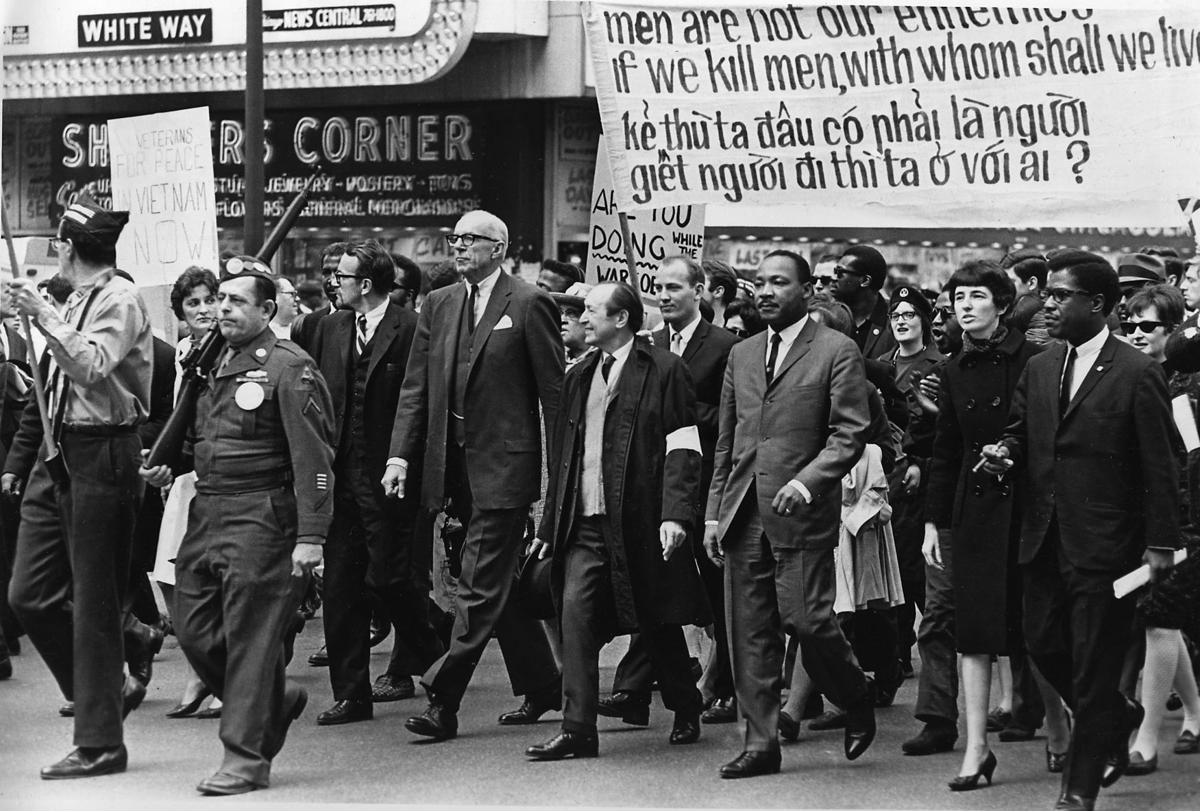 Leading the march against the Vietnam conflict are Benjamin Spock (tall, white-haired man) and Martin Luther King Jr. (third from right) in a procession on State street in Chicago, on March 25, 1967. Spock was co-chairman of the National Committee for Sane Nuclear Policy. 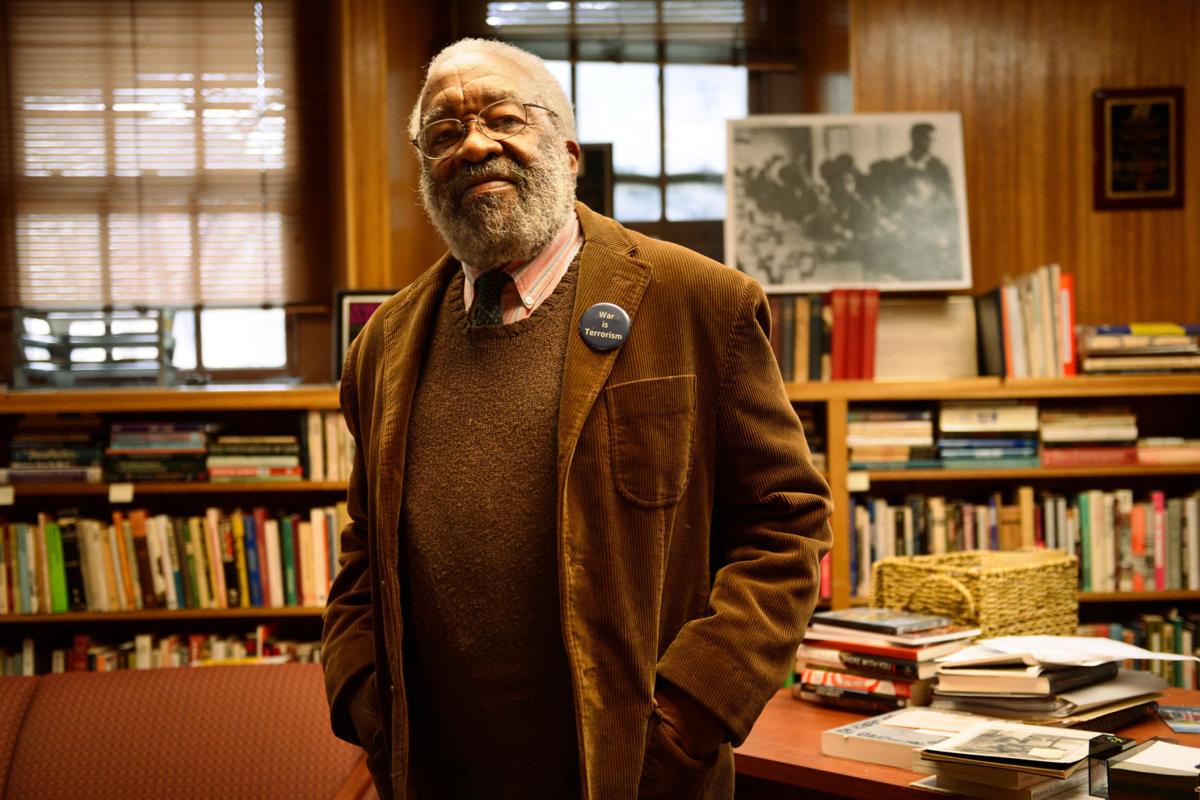 Martin Luther King Jr. stands in front of a congregation at Riverside Church in New York City to deliver his “Beyond Vietnam: A Time to Break Silence” speech. — Photo by John C. Goodwin

Leading the march against the Vietnam conflict are Benjamin Spock (tall, white-haired man) and Martin Luther King Jr. (third from right) in a procession on State street in Chicago, on March 25, 1967. Spock was co-chairman of the National Committee for Sane Nuclear Policy.

On April 4, 1967, exactly one year before he was assassinated, the Rev. Martin Luther King Jr. gave a powerful speech titled “Beyond Vietnam: A Time to Break Silence” at Riverside Church in New York City.

“King wanted to give this speech for quite some time, but his advisors and the people who were around him did not want him to begin speaking about issues that were beyond civil rights like the Vietnam War, rampant materialism and poverty,” said Amy Butler, senior minister at Riverside Church. “There were a small group of students at Union Theological seminary who invited King to speak on society issues. King thought it was time for him to break the silence. The students found out while they were organizing this event that there were a lot of people coming, so the event was moved from across the street to Riverside Church, which seats about 2,500 people.

“King had already been a frequent guest at the church as he has been to Riverside six or seven times,” she added. “In fact, the church had been trying to convince him to be pastor at one point when they were in between pastors. I think King kept coming back to this church because we are known for being a very socially, progressive, pushing-the-boundaries kind of congregation.

“The congregation and the pastors made a point of inviting prophetic figures who were always pushing the envelope,” Butler said. “This congregation was also involved in the civil rights movement, so I think it was very fitting that he did this particular speech at Riverside. I still have members of my church who was there when he spoke.”

The speech was written by social activist, historian and former professor of Iliff Theology School of Theology Vincent Harding.

“I’ve known Harding’s work for years, but I only got to know him after I became president of Iliff and I’m very moved by Harding’s writing of the speech,” said Tom Wolfe, president of Iliff School of Theology. “He didn’t do it in order to take credit for it. He actually was listening to King and attending worship at Ebenezer Church, especially when King was preaching. He knew that the Vietnam War was weighing heavily on King. Under that influence, he wrote a letter to The Southern Christian Leadership Conference stating that he thought it was time for them to put the civil rights movement in context with the Vietnam War.

“It wasn’t until Harding did that, that King asked him to write the speech,” he added. “Harding always saw himself as a servant of the civil rights movement and a server and brother of King. One year later to the day of that speech, King passed. Vincent was a very wise and spirited human being. While he would have had feelings about the cost of that speech, being the person that he was he understood these things as a part of an emerging struggle and process that the country was working through as it wrestled with its soul. He realized that he helped King articulate what he already believed and wanted to say in that speech.”

The speech was the launch pad to several interviews and other public speeches in which King came out against the war in Vietnam and the policies that created the war. King also believed that the Vietnam War diverted money and attention from domestic programs created to aid African Americans in need.

In the speech, King proposed the United States stop all bombing of North and South Vietnam; declare a truce in the hope that it would lead to peace talks; set a date for withdrawal of all troops from Vietnam; and give the National Liberation Front a role in negotiations.

“Everyone was okay with him talking about the civil rights movement, but when it came to national policy people thought that he stepped beyond his boundaries. With this speech, King gave us a deep understanding of how this nation works. He looked at the casualty list coming out of Vietnam and a lot of African-American men were dying proportionately. He looked at the figures of poverty in our country, which was being abandoned to fund a war. He wanted to speak out against it.”

After King delivered the “Beyond Vietnam” speech, he became an outcast. President Lyndon B. Johnson, who King was a solid supporter of, canceled his invitation for him to come to the White House. Civil rights leader Ralph Bunche, the NAACP and the editorial page writers of the Washington Post and the New York Times called the Riverside Church speech a mistake on King’s part. Others—including James Bevel, King’s partner and strategist in the civil rights movement — called it King’s most important speech.

“He gave up so much by speaking out on critical issues in America racism, materialism and militarism,” Butler said. “He challenged people on poverty and housing. He also made sure that banks and other lending institutions could not discriminate against people because of the color of their skin.

“King became persona non grata everywhere,” she added. “Nobody would invite him to speak at their churches. He could not get his column or his books printed. His organization the Southern Christian Leadership Conference went almost bankrupt because donations dried up. When King was killed one year later to that day that he gave that speech, his widow didn’t even have enough money to bury him. By the time he died, 72 percent of all Americans disapproved of him and 55 percent of African Americans disapproved of him. He really took a hit for this speech.”

This April, will mark the 50th anniversary of the “Beyond Vietnam” speech King delivered at Riverside Church. In honor of this feat, the Riverside Church will have a daylong event.

“In addition to the 50th anniversary of the speech at Riverside, this year will also mark 125th anniversary of Iliff School of Theology and the 25th anniversary of Veterans of Hope, an organization Harding created with his daughter Rachel,” Wolfe said. “We all created a bond and relationship over King’s “Beyond Vietnam” speech. All of our teams will be working together for the even on April 4.

“In October, Riverside, Iliff, and Veterans of Hope will be in Denver for the Iliff School of Theology weekend long event where we will carry on the theme of the ‘Beyond Vietnam’ speech,” he added. “Many people back then thought this speech was extremely controversial, but it was truly a speech ahead of time. It was relevant then and still relevant today. This speech will continue to inspire and be the voice of generations to come.”