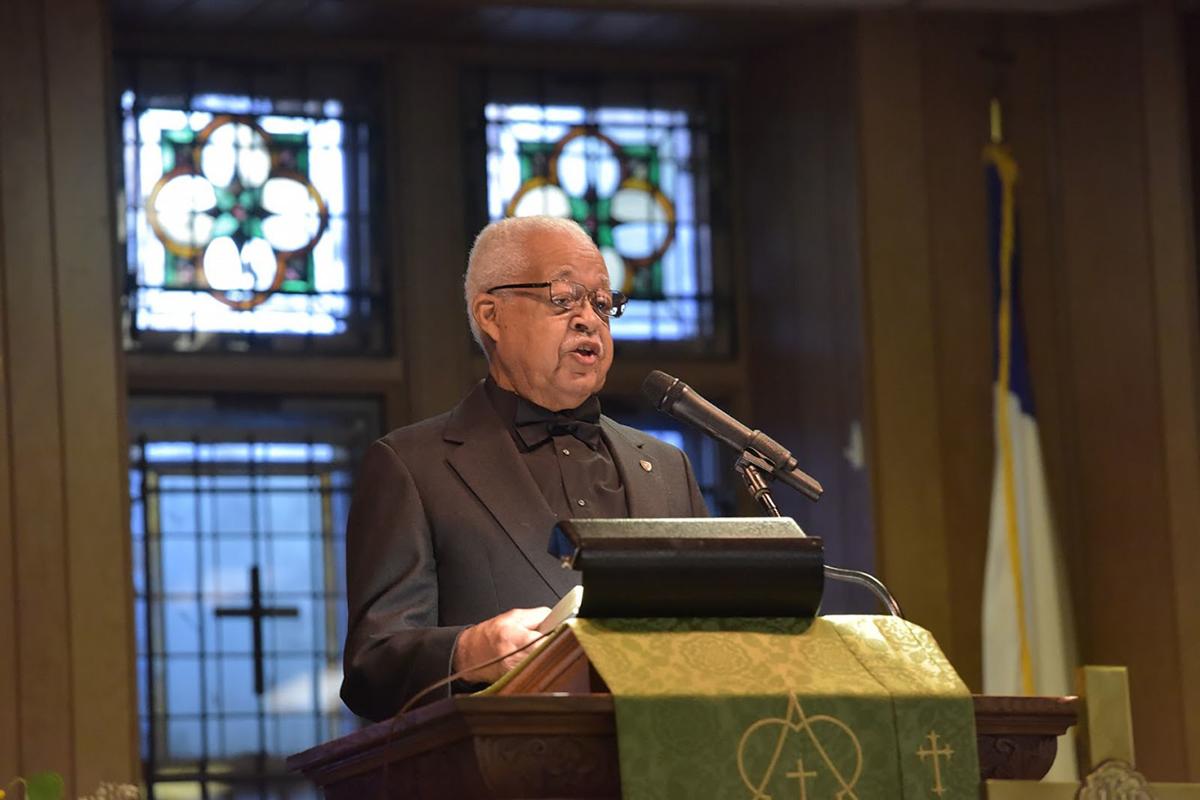 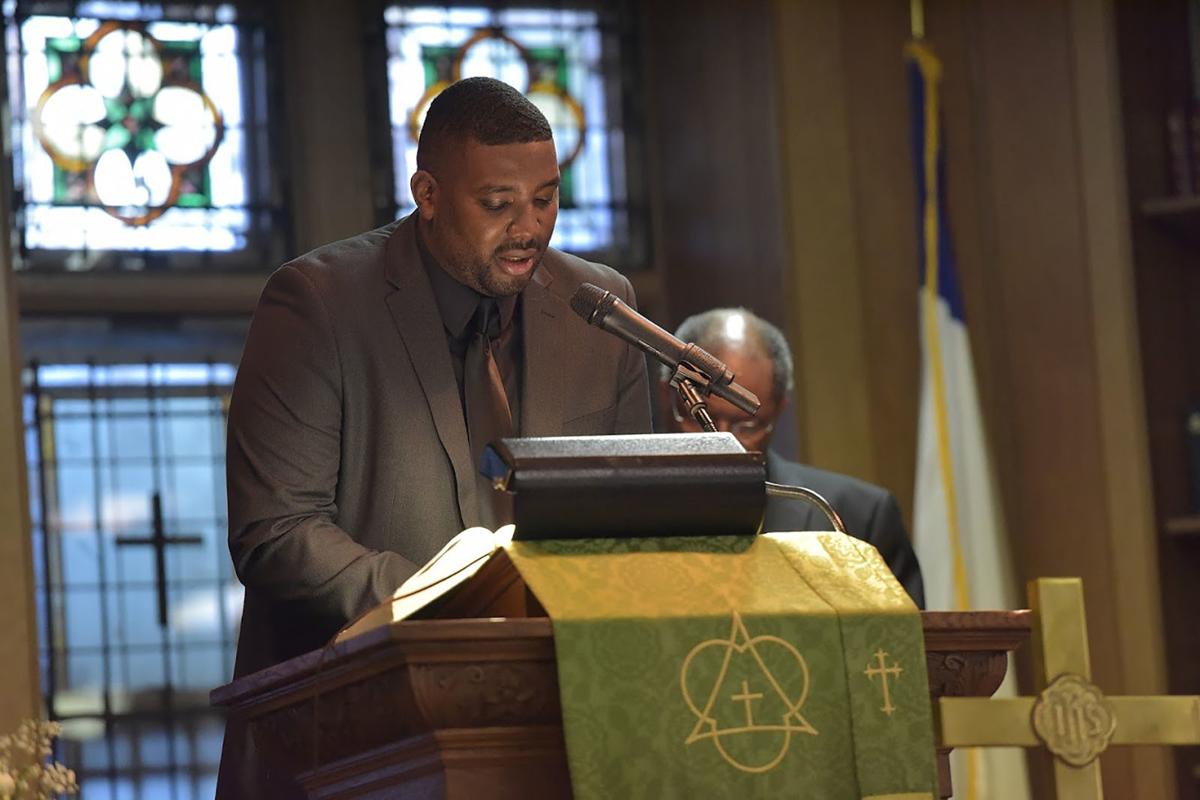 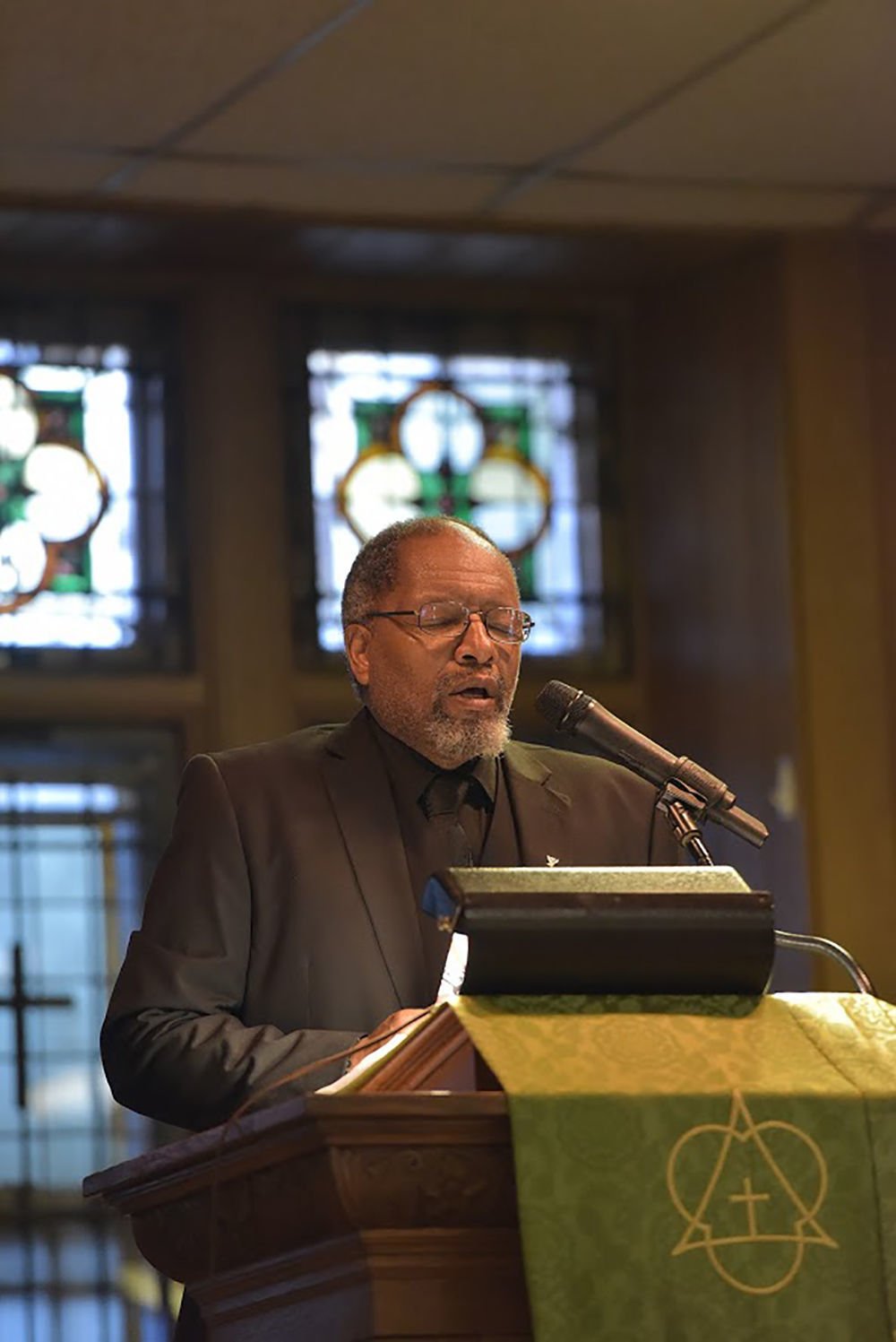 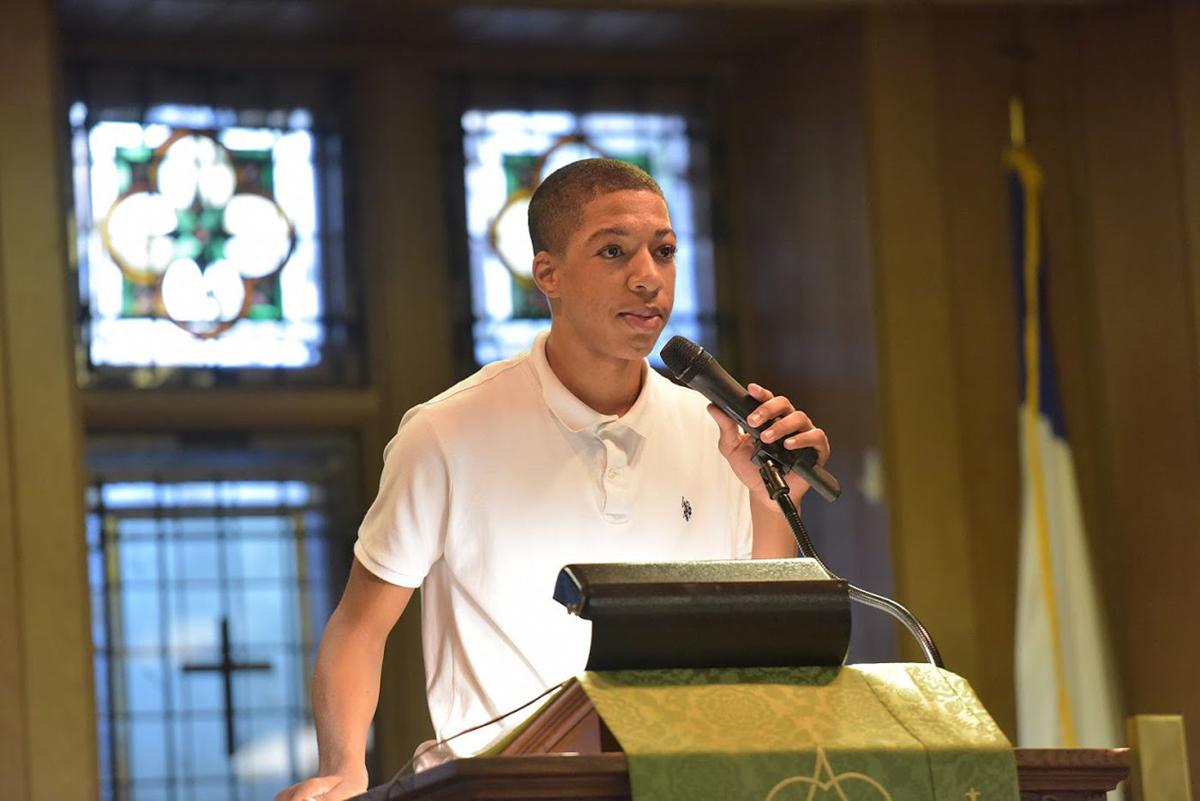 Brother Christian Harley reads from The Book of Psalms 1:1-3. 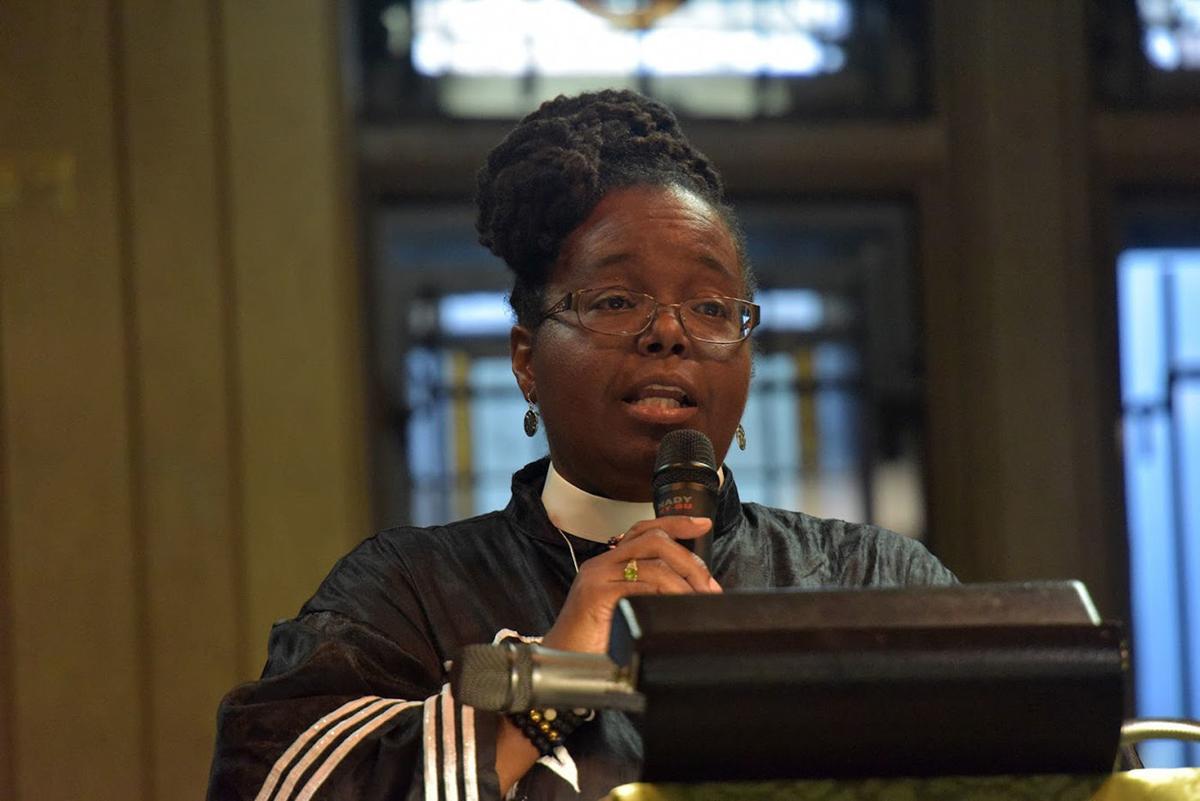 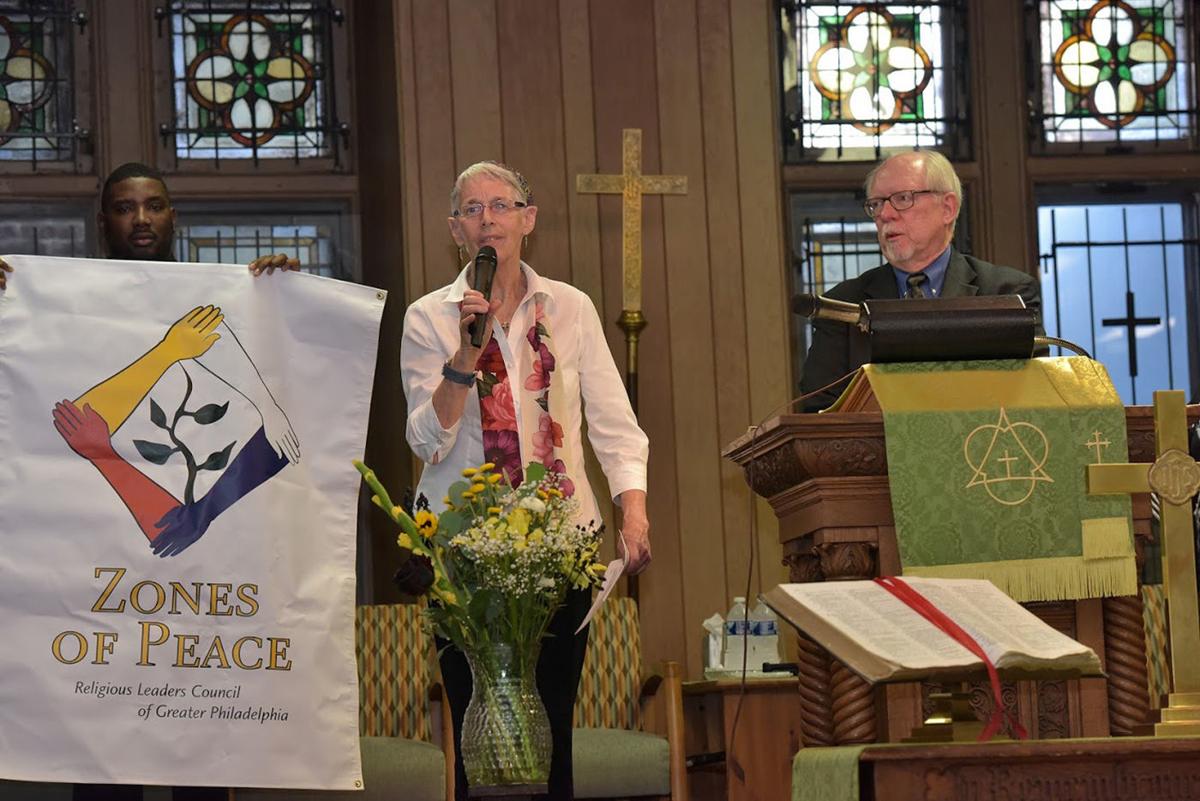 John and Sue from the Religious Leaders Council of Greater Philadelphia present a banner to Jones Tabernacle AME Church. 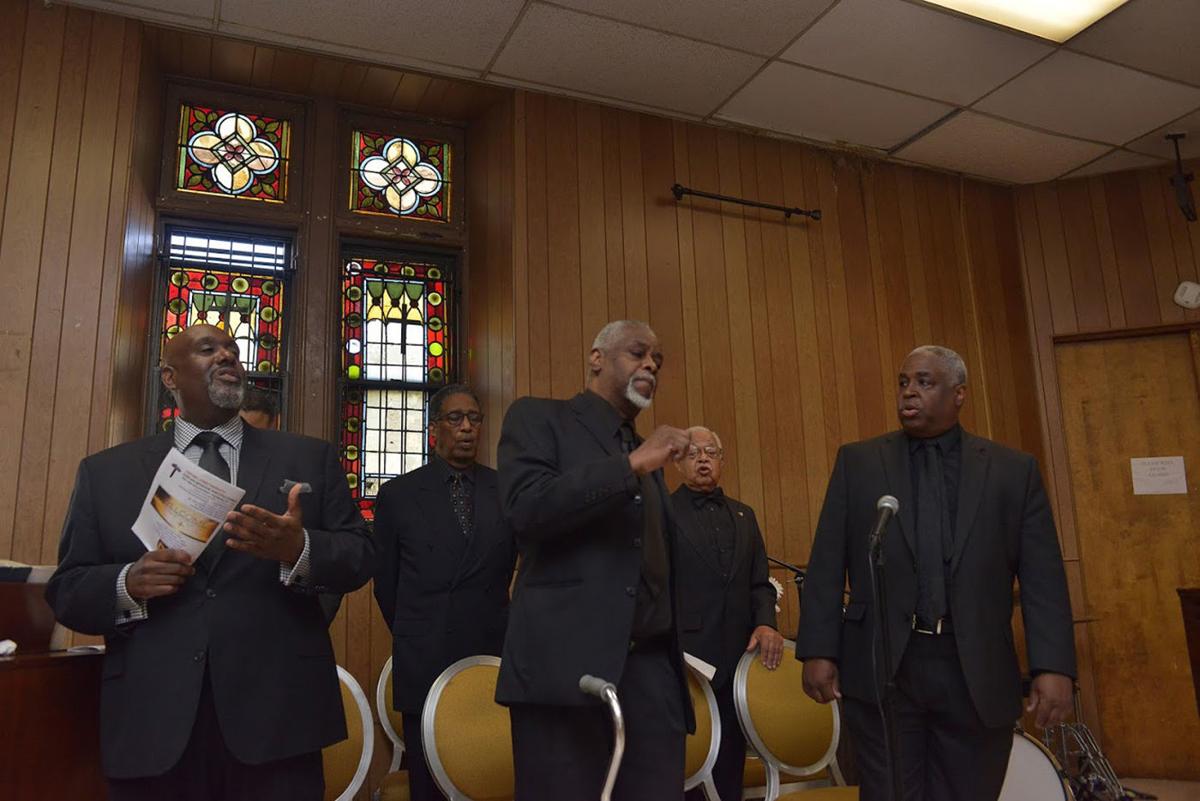 The Men’s Chorus sings a selection. 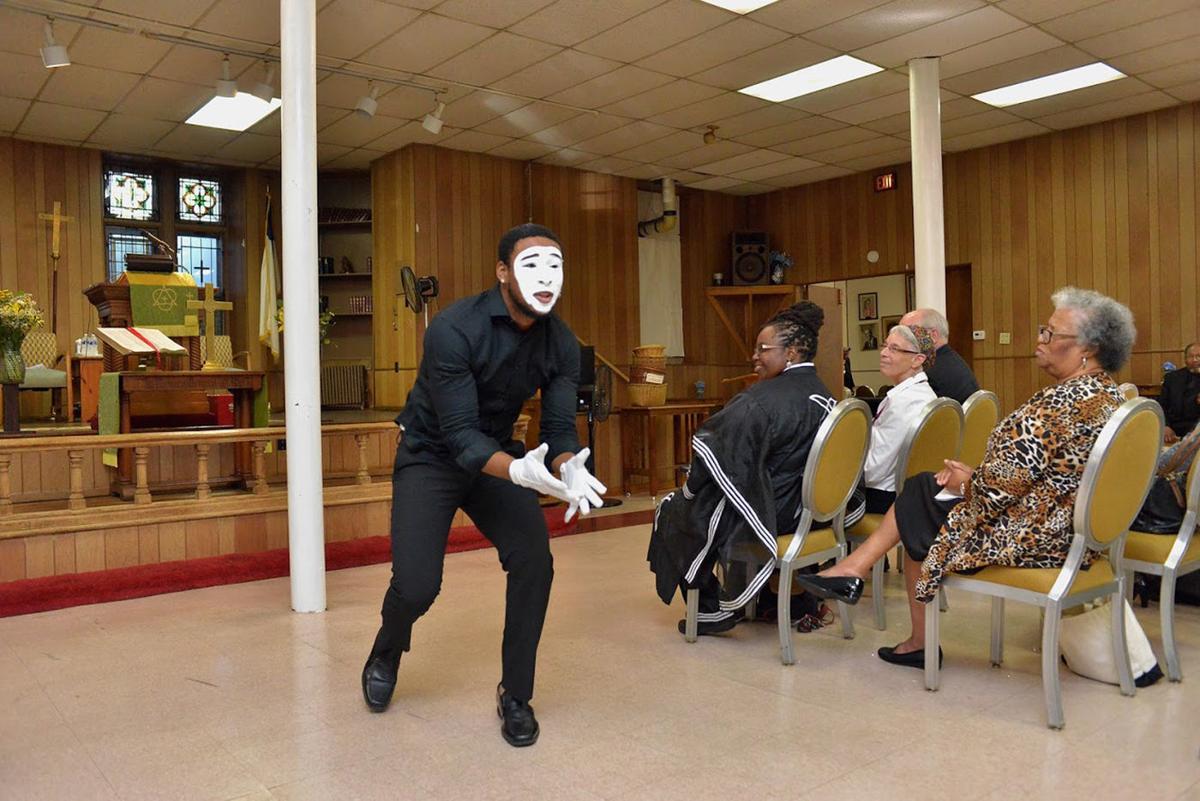 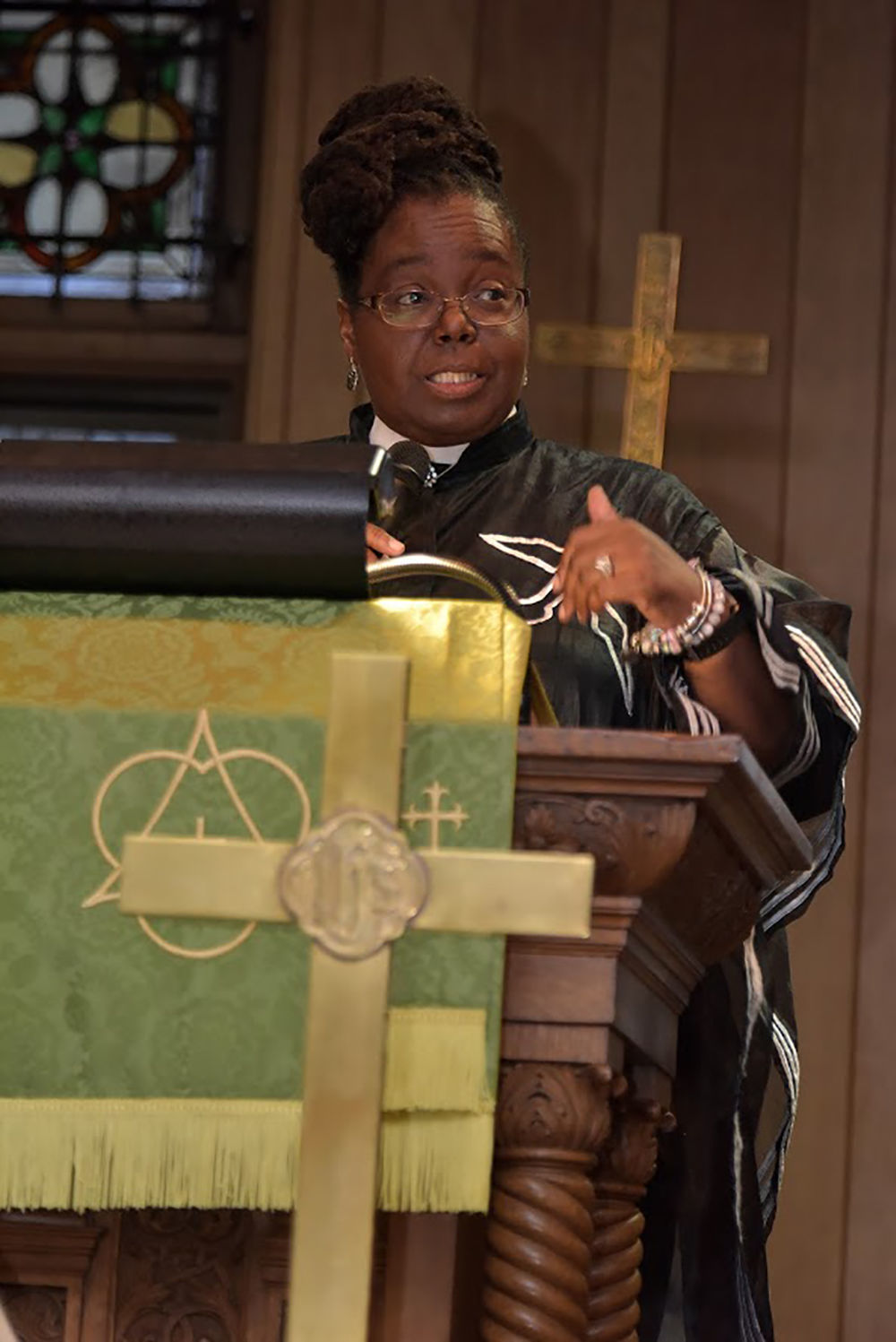 Brother Christian Harley reads from The Book of Psalms 1:1-3.

John and Sue from the Religious Leaders Council of Greater Philadelphia present a banner to Jones Tabernacle AME Church.

The Men’s Chorus sings a selection.

Founded 1881, Jones Tabernacle AME Church at 2021 Diamond Street is an historic North Philadelphia church with deep roots in the community. Members there include those who have attended for decades as well as some whom, attracted to its light, joined recently.

Whether new or long-term members, the members of Jones Tabernacle AME consider themselves a family with enough love to welcome anyone wishing to join.

For over 30 years, Valorie Pearson has been a proud member of Jones Tabernacle. She began attending church as a child with her mother.

“It’s a family church,” Pearson said. “My mother was a member here. I was married here at Jones Tabernacle. The Lord has kept me here. This is a fine church and have been a pillar of this community for nearly 90 years.

“It’s a church that services the community and a family driven church. I love the people here.”

Serving the community is a big part of the Jones Tabernacle identity and the church hosts numerous activities, programs and services to support them in their effort to meet the needs of the surrounding community.

“There’s the food share program that happens every third Thursday of the month,” Pearson said. “There’s the Angel Tree network which aids incarcerated families and we do a Thanksgiving outreach where we serve meals to the community.”

“She is our first female pastor and she has come in and hit the ground running,” Pearson said. “She has very good ideas and we are learning one another.”

John Hougen of the Religious Leaders Council of Greater Philadelphia recently paid Jones Tabernacle a visit. The interfaith council consists of 32 senior leaders, pastors, imams and heads of rabbinical associations, and the president of a Buddhist school, among others, form a network to address social concerns.

“One of the first things that that council discovered when they came together was that all of the leaders from all of the different religious traditions were hoping that people of faith would do more to reduce violence in the city and in the surrounding region,” Hougen said.

The work, services, programs and ministries of Jones Tabernacle got the attention of the council.

“This congregation has done such an outstanding job that I am here today to represent all of those leaders to say thank you and to say we love what you’re doing,” Hougen said.

Over 40 years ago, Kevin Lamb joined Jones Tabernacle and says he was drawn to the church in junior high school by two influential teachers who encouraged him to visit the church.

He did and he stayed.

During those early school years, Lamb said that those teachers directed him to participate in numerous programs for youth which took place at the church.

“They actually got in touch with my mom and asked her if it was all right if I came to the church. We have a strong Christian education program; we had a community outreach center that did a great deal of work out in the community. There was a lot for young people to do [here] back then,” Lamb said.

“Jones Tabernacle, believe it or not, is very welcoming. We want to see better in others even despite ourselves. That has pretty much been the foundation of ministry since I have been here.”

Terrill Carney,35, says he has been attending Jones Tabernacle since birth and was himself a participant in some of the programs and services.

During a time when many churches seem to have significant challenges attracting and maintaining a youth presence, Jones Tabernacle has enjoyed a church filled with youngsters.

How is this so?

“I think that we have been a church that has been engaging our young people and pushing them forward,” said Carney who works the Philadelphia court system.

Carney deals with youth who have had run-ins with the law. In his profession, Carney passes wisdom that he received from Jones Tabernacle. He utilizes the church’s valuable resources to help in his outreach efforts.

“God and the people,” said Nasir Hines, 15, when asked what keeps him attending the church. He said he has been a member for most of his life.

“Everybody loves you even if you do something wrong,” he said. “One mistake is ok but its not ok to make another.”

Hines raved about his friends at the church and how much love the members share with one another.

“Women in ministry have a hard time, especially when you’re the first,” said Burnett who was the first woman to lead the church in its 90-year history. “Jones Tabernacle was beyond that and immediately embraced me. They knew of me, they had seen work over the last 8 years prior to coming here and knew that we could work together.

“Some folks were skeptical, but 99.9 percent of the people said ‘Okay pastor what do we need to do next? Where do we go? What’s your vision? This is what we’ve been doing but we want something bigger and greater and we want to grow in God. Can you lead us in that direction’.”

Together, the pastor and congregation rolled up their sleeves and went to work.

“We began working on our Christian education department, our young people’s division and our seniors. We now have a seniors [group], it’s called our Senior Saints Ministry, and anybody under 70 is [not] in the group so they won’t let me in,” Burnett said with a laugh. “We make sure that they are well taken care of.”

Senior saints are sent get-well cards when sick and those who have moved away are regularly contacted.

“We instituted the Facebook Live streaming of the service so that they could participate in the services,” she said.

Seniors, the sick and shut-in or other members wishing to participate in Jones Tabernacle AME services can also participate via conference calls and web cams.

Jones Tabernacle AME might be 90 years old, but its not out of touch.