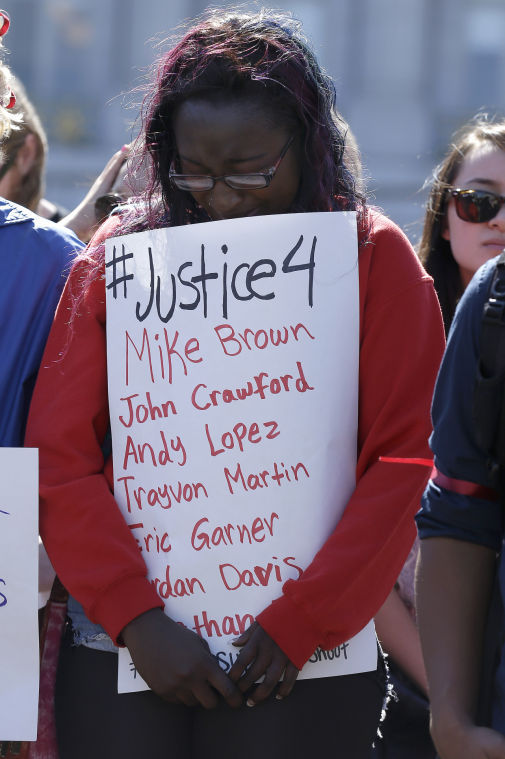 Savannah McCoy, 17, holds up a sign during a vigil for Michael Brown of Ferguson, Mo., in San Francisco, on Thursday. — AP Photo/Jeff Chiu 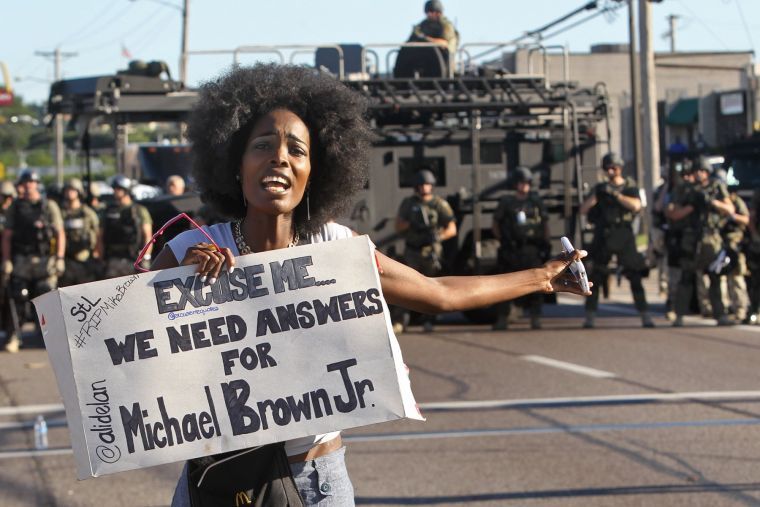 A protester holds a sign with #RIPMikeBrown in Ferguson, Mo. on Wednesday.

Savannah McCoy, 17, holds up a sign during a vigil for Michael Brown of Ferguson, Mo., in San Francisco, on Thursday. — AP Photo/Jeff Chiu

A protester holds a sign with #RIPMikeBrown in Ferguson, Mo. on Wednesday.

As the news surrounding the police-involved shooting of an unarmed teenager in Missouri increased, an early image of the victim appeared on media sites. The photo showed Michael Brown Jr. flashing a hand gesture that either resembled a “peace” sign or a gang affiliation. The 18-year-old wasn’t quite smiling and was posing in a somewhat tough, yet not quite menacing manner. Later, other photos emerged that showed a more innocent looking teen, wearing headphones at an arcade.

As outrage over Brown’s death spread across the country, it sparked the Black Twitter social media’s latest popular (or viral) hashtag (or # symbol) that questions the media’s role in influencing Black male stereotypes: #IfTheyGunnedMeDown. The hashtag’s accompanying tweets feature two different photos of the same person and the question, “If they gunned me down, which picture would they use?”

“Black Twitter” refers to a loose collective of mainly African-American Twitter users who are politically aware, engage in real-time conversations — and who use the platform to drive socio-political change. The Grio.com explained that, “Black Twitter holds court on pretty much everything from President Barack Obama to the latest TV reality show antics. But Black Twitter can also turn activist quickly. When it does, things happen.”

“Black Twitter brings the fullness of Black humanity into the social network and that is why it has become so fascinating,” shared Kimberly C. Ellis, who has a doctorate in American and Africana Studies, tweets as @drgoddess and is studying Black Twitter for her upcoming book, “The Bombastic Brilliance of Black Twitter.”

“Black Twitter” has captured the imagination of the online world. In 2010, a Pew Research Study highlighted trends demonstrating Twitter usage was disproportionately Black and female. According to their report, while similar numbers of Blacks and whites use the Internet — 80 percent and 87 percent, respectively — 22 percent of those Blacks who were online used Twitter in 2013, compared with 16 percent of online whites.

“If you are from a particularly marginalized community or one where others have spoken for you, but you have not had the agency to really speak for yourself or make your truth known, then it is absolutely necessary that in any instance you can take on that agency that you do so,” said Meredith Clark, a doctoral candidate at the University of North Carolina at Chapel Hill who is writing her dissertation on Black Twitter, and tweets from @meredithclark. “And so that is what you see happening in Black Twitter.”

“Twitter hashtags happen because the chances of getting real contact and effective representation from our ‘leaders’ is non-existent,” noted writer and activist Sydette, who tweets as “Black Amazon.”

The criticism has taken Twitter by storm not only among Americans, but now on an international scale. In commentary for Al Jarreza, St. Louis-based writer Sarah Kendzior said, “Twitter activism among Black Americans causes discomfort because it highlights the structural nature of racist oppression in the U.S. as well as the complicity of those who uphold and benefit from it. When U.S. journalists cover Twitter activism in other countries, they portray it as empowering. When marginalized people of color — people whose own history of oppression in the U.S. is systematically played down — share their plight online, it is recast as aggression, exaggeration and lies.” (An Al Jazeera news team was among the media targeted with teargas by police while reporting on the protests in Ferguson last week.)

According to Neilsen, at least half of all African-American mobile users have smartphones and 58 percent access the Internet use their mobile devices. Feminista Jones (@FeministaJones) explained that “African-American Twitter users have created a virtual community that participates in continuous real-time conversations. When they work together, this collective is proving adept at bringing about a wide range of sociopolitical changes. It doesn’t take much effort to get users to rally together behind causes that may have an impact on their lives.”

Thus, Black users of Twitter can interact anytime, anywhere. Sharing information is as simple as opening an app and retweeting. “We don’t need a whole bunch of background information to fight injustice — if you tell us about a problem, we can fact-check online within minutes to verify and be down the road on tackling inequality,” said Angela Rye, director of strategic partnerships at IMPACT.

As social media networks evolve, “Black Twitter” proves to be the underground railroad of activism as it’s hashtag messages dominates Twitter timelines 140-characters at a time.

Or, as LaNeshe @Nesheaholic pointed out in a Twitter message last week: “Social media and camera phones are definitely coming in handy to illuminate what is happening in #Ferguson.”