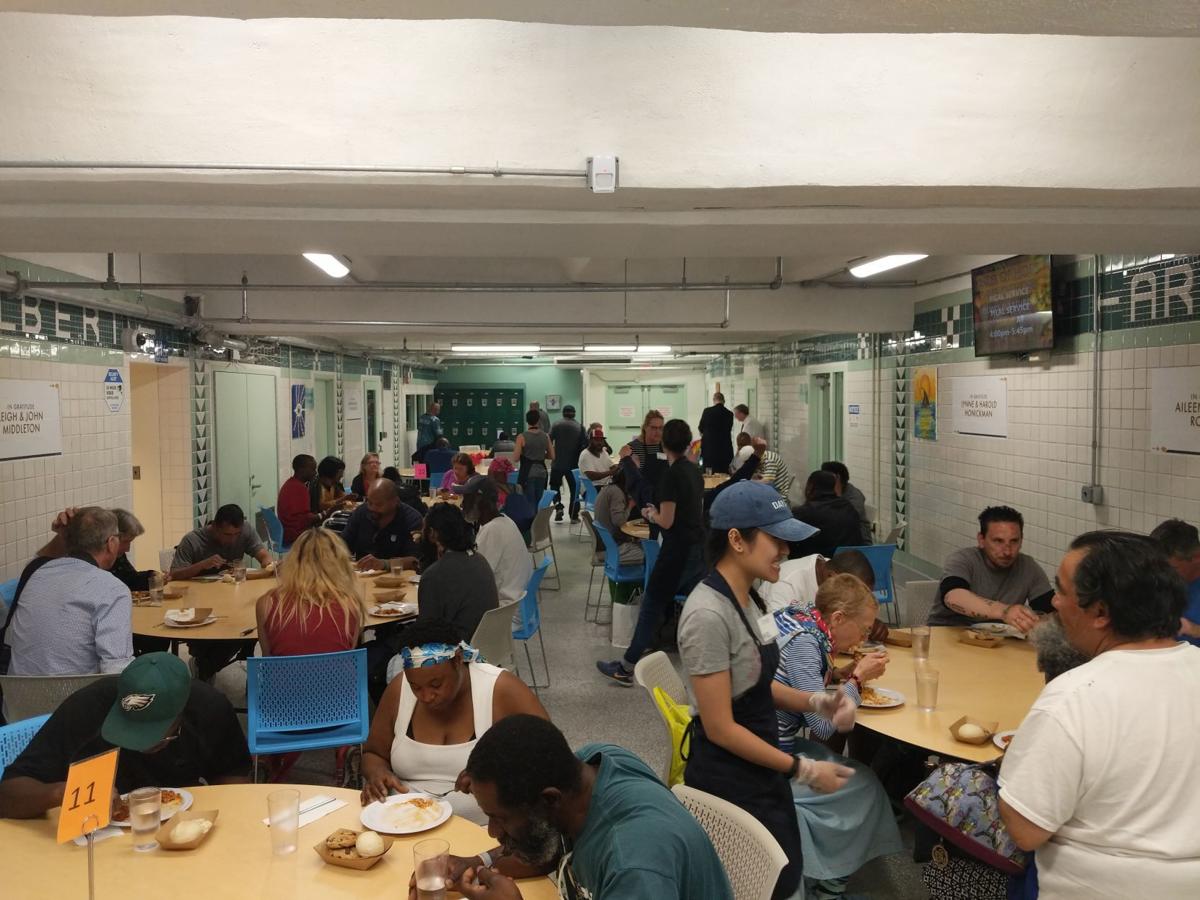 Scores of people received a free meal as part of a new service at the Hub of Hope, located in the Center City subway concourse near the Municipal Services Building. — tribune photos by michael d’onofrio 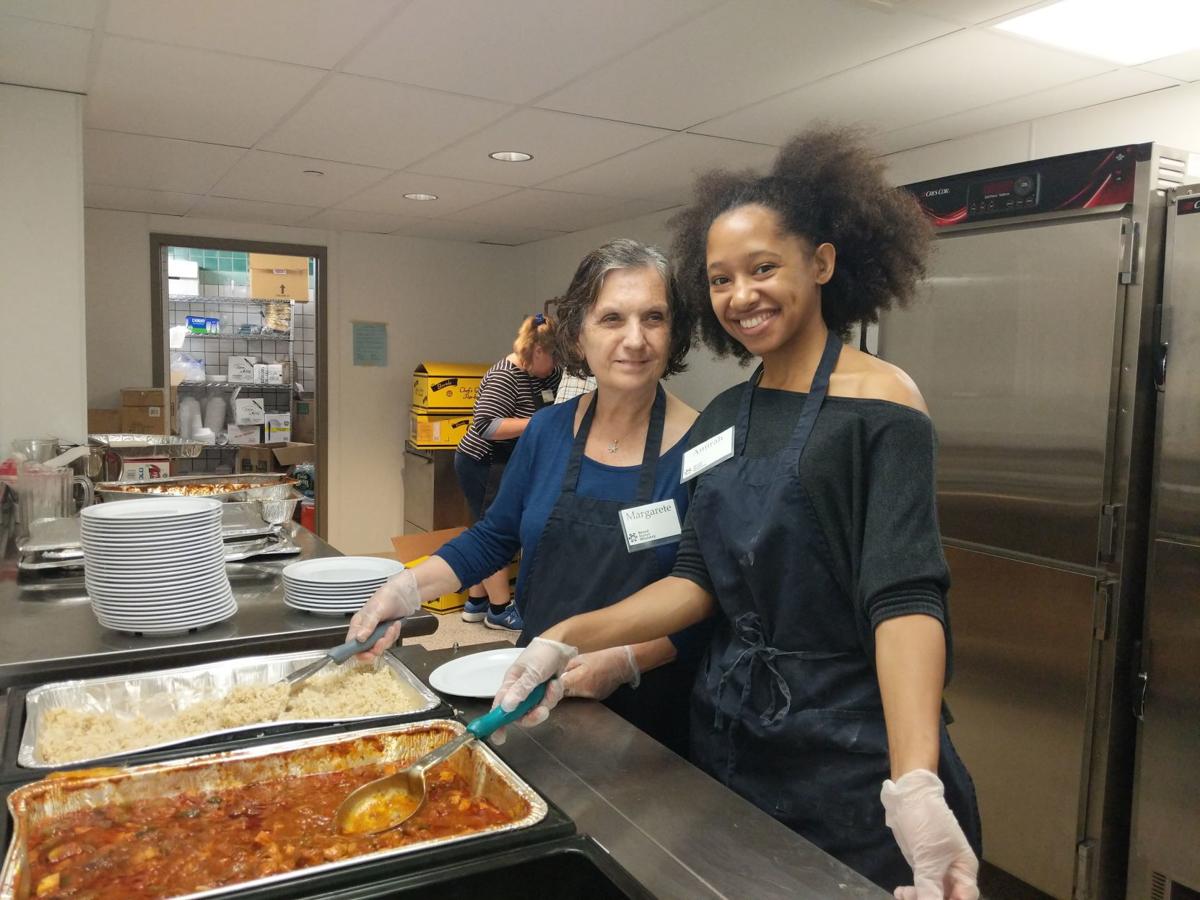 From right to left, volunteers Margarete Mullaney and Amirah Heath prepare meals on Friday for the new meal program at the Hub of Hope.

Scores of people received a free meal as part of a new service at the Hub of Hope, located in the Center City subway concourse near the Municipal Services Building. — tribune photos by michael d’onofrio

From right to left, volunteers Margarete Mullaney and Amirah Heath prepare meals on Friday for the new meal program at the Hub of Hope.

A new meal program has begun offering hot evening meals a couple of days a week to those experiencing homelessness in Center City.

But city grants are seeking volunteers and groups to ensure dinners are served every day.

The Hub of Hope, a service center for the homeless based in the Suburban Station concourse near the Municipal Services Building, is expanding its services to include hot meals on Fridays and Saturdays between 4 and 6 p.m.

The center, which opened a permanent location in January, is a collaboration between the city, the nonprofit Project HOME, and SEPTA.

“The city government can’t solve homelessness alone. It takes this kind of partnership to show what we can do when we all work together,” said Mayor Jim Kenney on Friday at the Hub of Hub surrounded by other officials shortly before dinner was served.

Broad Street Ministry, a Christian-based hospitality and civic engagement group, and Philabundance, the area’s largest hunger relief organization, will work in tandem to run the program.

Broad Street Ministry will coordinate the program, including recruiting volunteers, welcoming the guests, and serving the meals; Philabundance will prepare 300 meals a day for when the dinner is served.

“Our goal is to never turn anyone away,” said Mike Dahl, the executive director of Broad Street Ministry, which currently offers meals and other services at its South Street location.

Among those in attendance at the Hub of Hope on Friday was Noel Eisenstat, chairman of the board of directors for Philabundance; Mary Scullion, executive director of Project HOME; and Councilwoman Jannie Blackwell.

The meal program officially kicked off on March 2, and is expected to expand to Sundays starting June 3.

On Friday, more than 130 people sat around tables as more than a dozen volunteers served the evening meal: chicken, rice, bread and chocolate chip cookies.

One of the volunteers preparing the plates inside Hub of Hope’s kitchen was Amirah Heath, 29, of North Philadelphia. A doctorate student at Howard University, Heath said she felt it was important to give back to those in need.

While the dinner has attracted an average between 120 and 185 people, Dahl expected those numbers to rise.

“We’re just beginning,” Dahl said. “And so we believe, as more and more people find out about it, more people will come.”

Over the next year, the goal is to expand the program to seven days a week, but officials were calling on groups and volunteers to make that a reality — and offering upwards of $20,000 in grants.

“We cannot do it alone. We need volunteers to make the model work,” Dahl said.

Kenney said the program was looking for schools, church groups, religious and community organizations, among others, to commit to cook and serve meals for the program.

Among the first groups to commit to the new program was Muslim Service, a nonprofit social and hunger relief organization.

“Hopefully we can build trust and give back to some of our citizens the dignity they need to progress with their lives and take it to the next level,” said Executive Director of Muslim Service Abdellah Abdul-Qawi, who also spoke at the Hub of Hope on Friday.

Hub of Hope helps facilitate placements in shelters, treatment programs, and housing for those experiencing homelessness.

The center has always provided coffee, tea, and other light refreshments, along with showers and a place to wash clothes.

A private grant will also fund a breakfast program beginning in July.

Now, if only the City of Philadelphia does some thing about PHA; I went in and to GREAT laughter, learned there is a (sitting down for this?) 10 YEAR wait period!!! 10 YEARS?? Come ON! No guarantee I will survive THIS night; yet 10 YEARS, waiting (hopeful) to be CONSIDERED (not placed, considered) for housing???? Granted, "home-less-ness" offer$ NOTHING in return so those who really desire and DO help, it is a thankless (one-way street!) chore! Only those who TRULY desire TO give and be OF help are willing, yet NONE of these are IN-government!!! Yes, I stated it, not to be an ingrate; politician$ are NOT about "helping" but "$elf". THIS is the REAL road-block towards solving homelessness, politician$ who do NOT care, just lip-service.