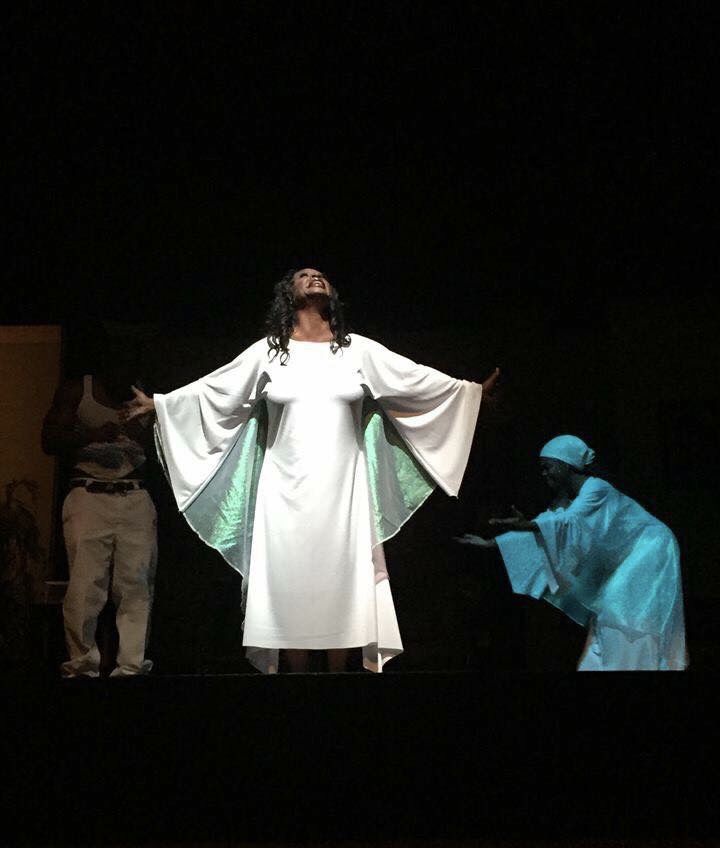 Danielle Shaw Oglesby stars as the mother of Ricky in the award-winning “Life Isn’t Fair” on Jan. 11, 2020. — SUBMITTED PHOTOs

Danielle Shaw Oglesby says of her character in the play “I love mom because she’s spiritual and so am I, and she also loves to sing just like I do.”

Danielle Shaw Oglesby stars as the mother of Ricky in the award-winning “Life Isn’t Fair” on Jan. 11, 2020. — SUBMITTED PHOTOs

Danielle Shaw Oglesby says of her character in the play “I love mom because she’s spiritual and so am I, and she also loves to sing just like I do.”

And that’s because, recalls the Philadelphia native, “I was raised around music. In fact, my grandmother was a jazz singer here in Philadelphia singing with the Philadelphia Legends of Jazz. And my grandfather was a saxophonist and trumpeter with the Lionel Hampton Band. So I always had all that around me, and music is really at the core of who I am.”

Singing was always Oglesby’s first career choice. She says “I am primarily a singer. I’ve been singing in groups. I’ve had a band. I have viral videos on the internet.”

Indeed, Oglesby was a recording artist while with the group Mahogany, and also spent years with the Solution Band. She’s also known for her viral video singing “Say Yes.”

But she’s also an actress, something she says she got into to occupy her mind after the tragic murder of her daughter in 2018.

Oglesby already knew playwright, actor and producer Derrell Lawrence, author of “I Love You to Death” and “Life Isn’t Fair,” two plays that will be presented for one day only Jan. 11 at the David L. Kurtz Performing Arts Center on School House Lane.

“Derrell had asked me to be in some of his shows. I agreed and I’ve been on this wonderful ride ever since. And it’s been great and a lot of fun,” Oglesby insists.

She also insists she loves acting, mainly because “you can transform yourself into so many different people. You can bring to life so many different emotions. To actually be into it and succeeding, is something beyond my wildest dreams.”

Oglesby began her foray into the theater playing the feisty Aunt Roxanne in Lawrence’s “The Funeral.” She was also seen in “Do You Trust Your Best Friend?” last year. And she’s soon to appear as the mother of Ricky in the award-winning “Life Isn’t Fair” on Jan. 11.

“Life Isn’t Fair” tells the story of Ricky Jones and is based on the real life experiences of Lawrence, who lost both his father and sister to murder.

“Ricky’s mother was killed when he was a young child, so she comes back in spiritual form to let her son know God is watching and everything will be all right. And I also sing in this play so I enjoy that,” Oglesby says.

“And in doing this play I am able to relate to mom, as she’s known in the show,” the actress/singer continues. “I love mom because she’s spiritual and so am I, and she also loves to sing just like I do. And then, too, mom is missing her son and that relates to me as well because I’m missing my daughter.

“But the real challenge comes when you are not able to relate and still make your character believable. But that’s also the fun part. And I think I prefer that. I like to see what areas I can get into as an actress because it’s all still new to me.”

After this show, Oglesby says she’s happy to go wherever life takes her, continuing to act and singing as much as possible.

“I just want to keep active and productive. That’s all I can really ask for,” she concludes.

Like many actors who came before her, Ohio native Daria Pilar Redus fell in love with the theater when she was still quite young.