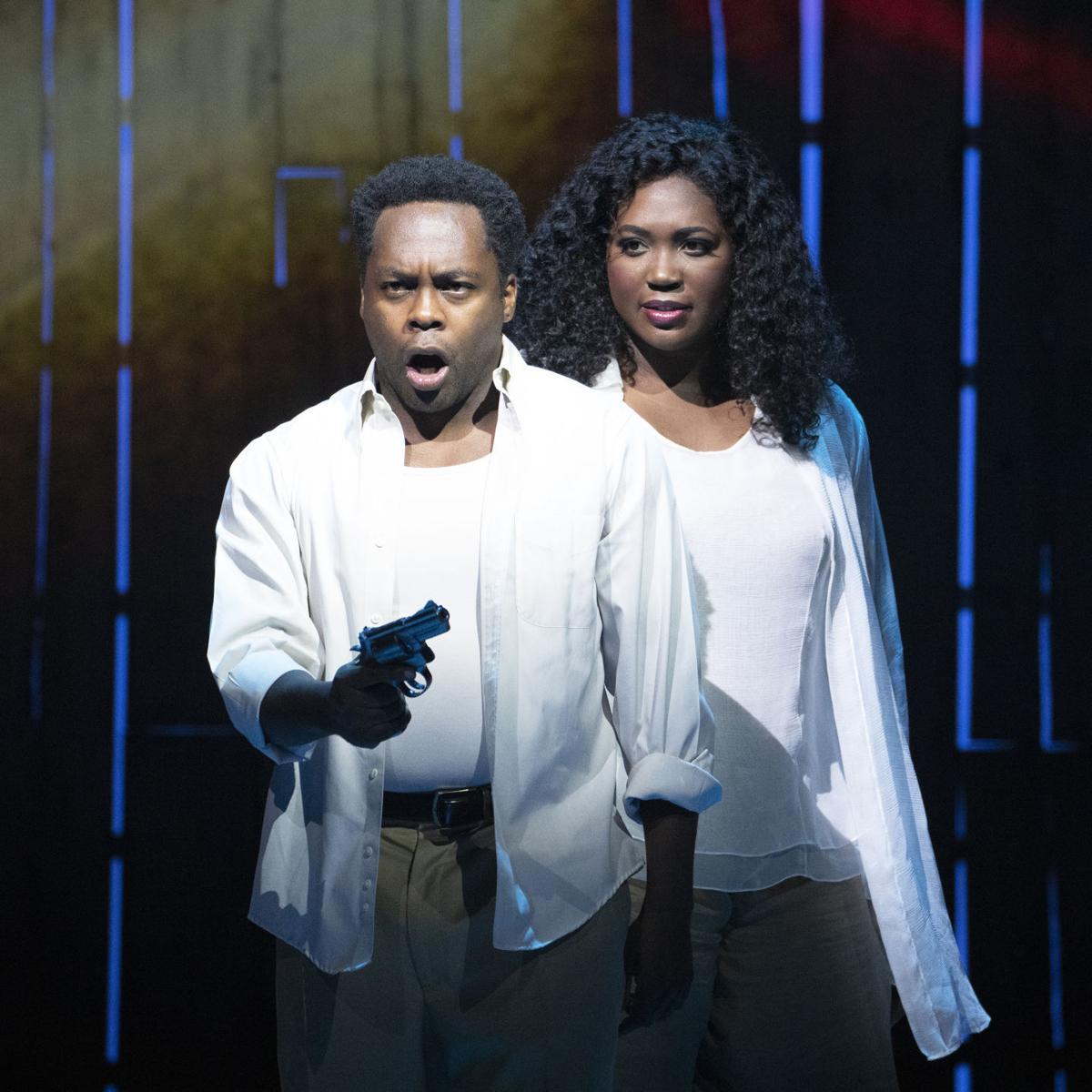 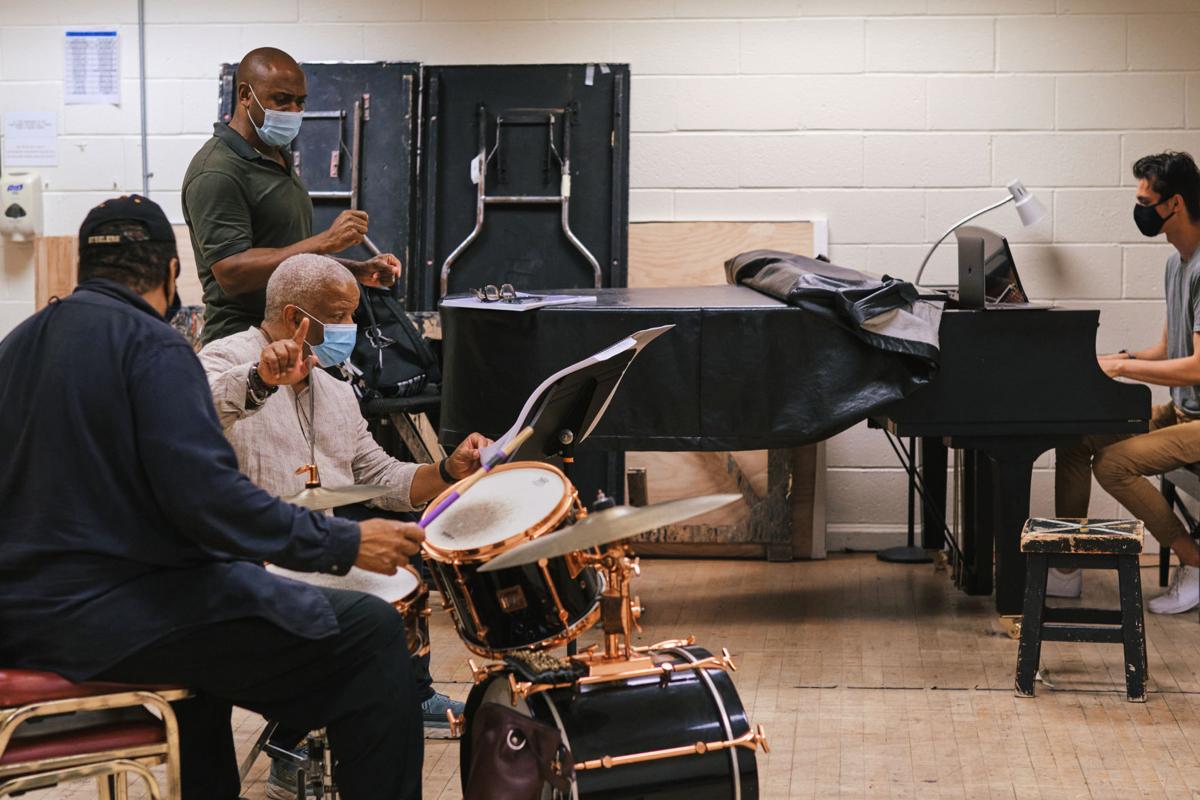 Terence Blanchard, holds up his finger during rehearsals of the jazz ensemble that is embedded in the “Fire Shut Up in My Bones,” orchestra in New York on Oct. 5, 2021. Two critics discuss Blanchard’s “Fire,” the Metropolitan Opera’s first work by a Black composer. —Simbarashe Cha/The New York Times 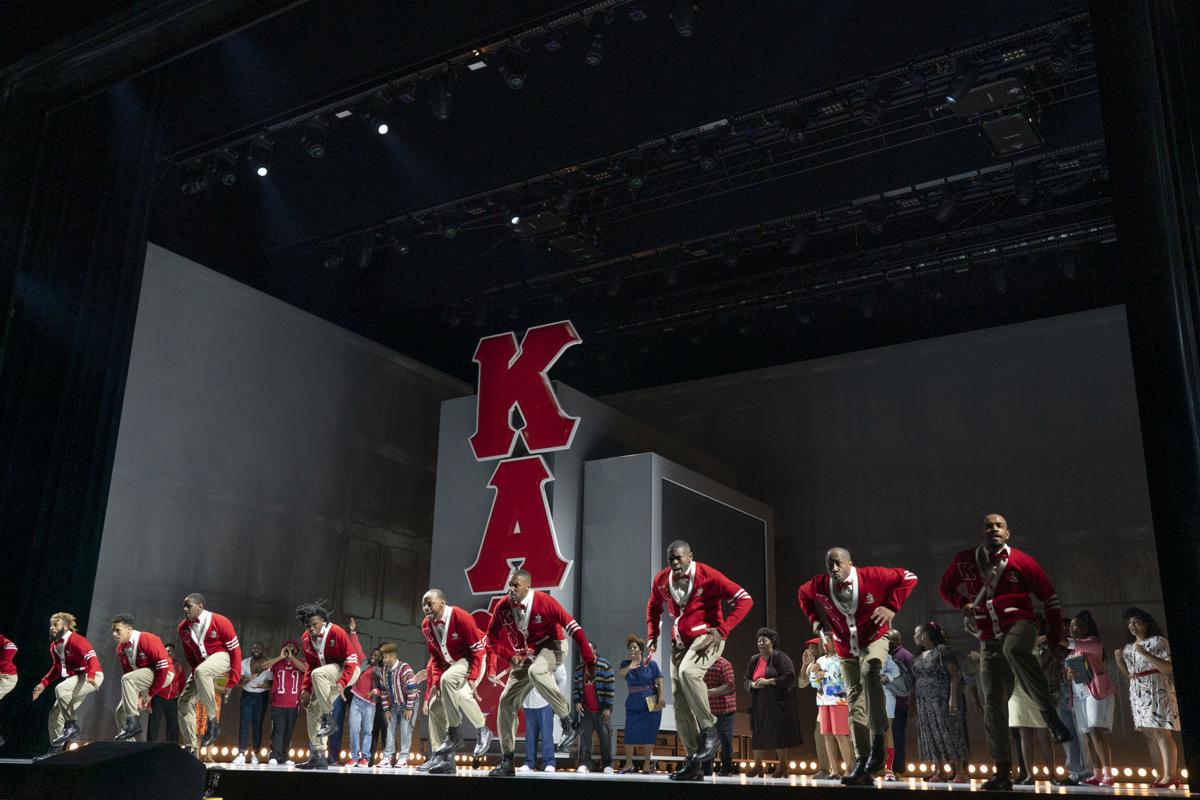 At the start of Act III, when Charles pledges the Kappa Alpha Psi fraternity, in “Fire Shut Up in My Bones,” at the Metropolitan Opera on Sept. 20, 2021. The step routine drew the night’s longest and most vigorous applause. 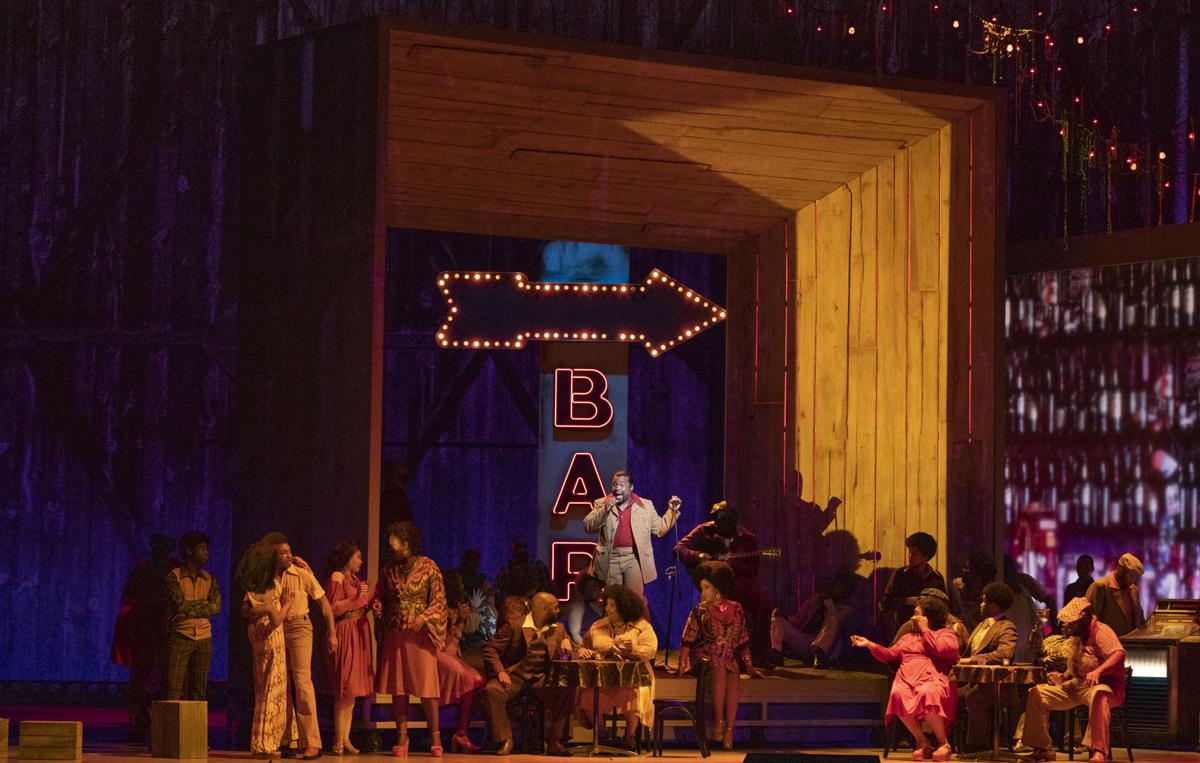 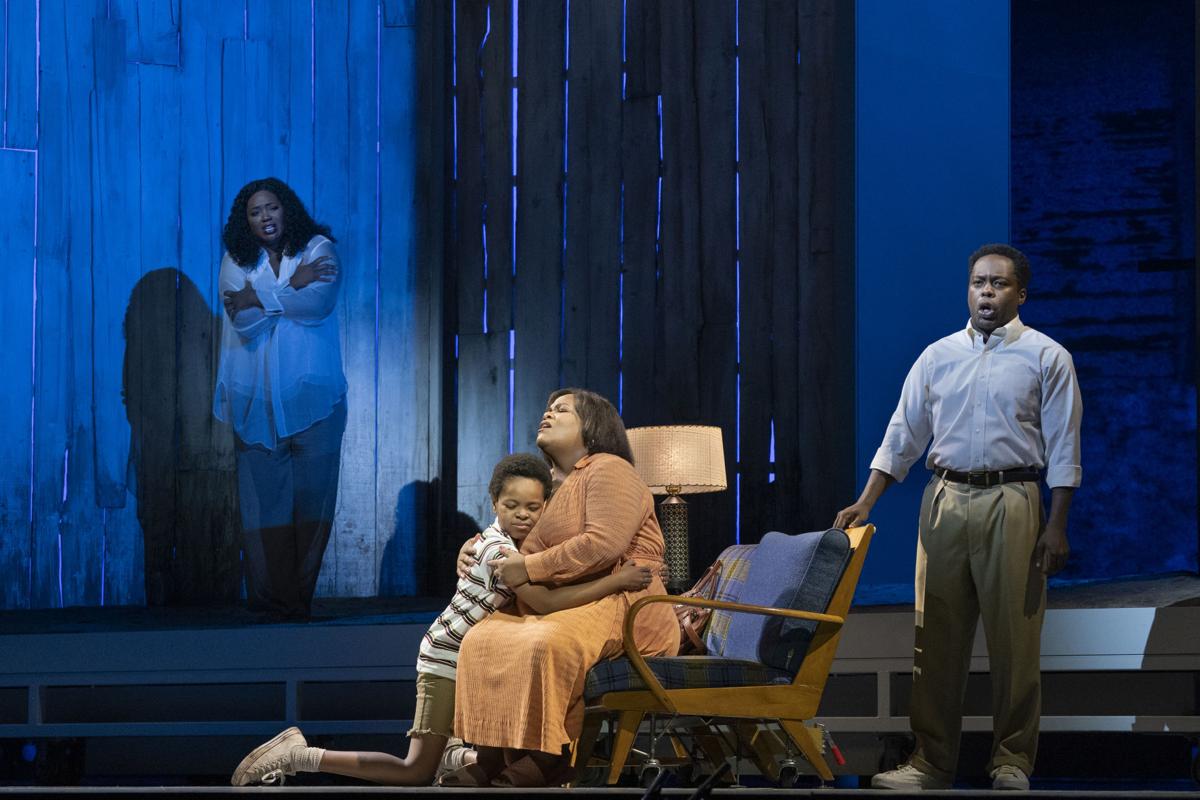 Terence Blanchard, holds up his finger during rehearsals of the jazz ensemble that is embedded in the “Fire Shut Up in My Bones,” orchestra in New York on Oct. 5, 2021. Two critics discuss Blanchard’s “Fire,” the Metropolitan Opera’s first work by a Black composer. —Simbarashe Cha/The New York Times

At the start of Act III, when Charles pledges the Kappa Alpha Psi fraternity, in “Fire Shut Up in My Bones,” at the Metropolitan Opera on Sept. 20, 2021. The step routine drew the night’s longest and most vigorous applause.

“Fire Shut Up in My Bones,” which opened the Metropolitan Opera’s season last week, was a milestone: the company’s first work by a Black composer. The music, by Terence Blanchard — a jazz trumpeter also known for his scores for Spike Lee films — has earned praise from both classical and jazz critics.

The New York Times’ chief classical critic Anthony Tommasini described “a compositional voice dominated by lushly chromatic and modal harmonic writing, spiked with jagged rhythms and tart dissonance.” Jazz writer Nate Chinen wrote for NPR that “the smooth deployment of extended jazz harmony, often in breathing, fleeting passages, marks the piece as modern — as does the work of a rhythm section nestled within the orchestra.”

The Times sent two more critics to the second performance Friday. Seth Colter Walls, based on the classical desk, and Giovanni Russonello, who specializes in jazz, have both covered figures who cross with ease between concert halls and jazz clubs. But “Fire,” based on a 2014 memoir by Times columnist Charles M. Blow, was their first night at the opera together, the spur to an extended discussion.

SETH COLTER WALLS: As we walked into the Met, you described yourself as an opera neophyte. But as Duke Ellington said, good music is good music. And from our intermission chats, I know we agree that this was a richly enjoyable work. How do you place it within Blanchard’s career?

GIOVANNI RUSSONELLO: We knew going in that Blanchard’s body of work is one of the broadest and most imposing of any living jazz musician. But I was struck by how many aspects of his past output seemed to come together in “Fire.” He’s one of the rare jazz composers who can load up a piece with rich harmony and real rhythmic pleasure, without feeling the need to tie things up neatly or deliver a clean payoff. That style fed perfectly into the emotional ambivalence that gives this opera its power.

WALLS: I find that quality to be one of the weapons he offers Spike Lee, who in his films tends to delight in keeping alive ambiguous tension. Blanchard can suture small wings of hope to what otherwise seems a rock of despair, and keep you wondering whether the whole assemblage will rise or fall.

RUSSONELLO: From the opening scene of “Fire,” his diverse palette was put in the service of narrative nuance. As Charles, the main character, speeds down the highway, holding a pistol and a fatal decision in his hands, a distant swing feel wafted up from the pit, propelled by the bassist Matt Brewer and the drummer Jeff Watts, who’s known in jazz circles as Tain. It had the same restless, pushing-forward feeling as many of Blanchard’s small-group jazz compositions. But a drape of violins also hung above, moving in unison with the baritone Will Liverman’s vocal lines — and calling to mind some of those sweeping film scores.

WALLS: True, though Liverman also sounded a bit swamped by some of that opening brass-and-percussion-heavy writing. But soon after, the subtlety of his singing impressed me. Flintier aspects of his tone dominated during the first act, but then fell away as the night wore on. Even by the time of the “golden buttons” melody in the first act, I think we both were moved by the warmth in his voice.

RUSSONELLO: And by the gravitas of his duet on that melody with the soprano Angel Blue, who plays three characters: the half-menacing Destiny; the all-too-sympathetic Loneliness; and Greta, with whom he falls in love.

Which leads me to another successful element of “Fire” that reflects Blanchard’s roots in the Black musical tradition: the interplay between vocalists, in duets and ensembles. Some of the most rousing moments were not solos but shared performances: When Charles’ mother, Billie (Latonia Moore), sings about her frustrated dreams early in the opera, the chorus is behind her describing the tough conditions of their town, giving her struggles texture and weight. Charles’ brothers’ recurring taunt — “Charles baby, youngest of five” — becomes one of the opera’s most memorable refrains.

WALLS: Following Billie to her job at the meat-preparation plant also turns into a fine group number. And, crucially, there are laugh lines in these and other scenes.

RUSSONELLO: Group dance performances stood out, too. Act II’s opening ballet sequence and the step-team number in Act III were probably the clearest examples of African diasporic tradition meeting opera convention; in both moments, something sparked.

Blanchard has said that, like his first opera, “Champion” (2013), “Fire” is an “opera in jazz.” But like any postmodernist, his understanding of what constitutes jazz is quite open.

RUSSONELLO: Blanchard has such a knack for counterintuition: A consequential scene at a blues club begins with the orchestra playing some straightforward blues in the background, but when the bandleader character (Spinner, Charles’ scalawag father, played by Chauncey Packer) gets onstage, he sings something more operatic and complex.

WALLS: That second-act dream-ballet music — perfect for the languid, suggestive dancing that it was paired with — was but one passage suggesting Blanchard’s love for the standard repertory. Yet we haven’t had anything quite like “Fire.” Leonard Bernstein looked at intergenerational trauma amid a distinctly American sound world in “A Quiet Place” — and while I love it, it’s also a notorious problem piece. And “Porgy and Bess” has never really worked as an evening of theater for me. (Great tunes, though.)

So my response to this big-budget production was: Finally! Real classical music resources are being used here, for a real exploration of American musical culture. I feel like there’s a huge potential audience for this material — even for people who may not think of themselves as operagoers. (“Fire” will be simulcast to movie theaters on Oct. 23 as part of the Met’s Live in HD program.)