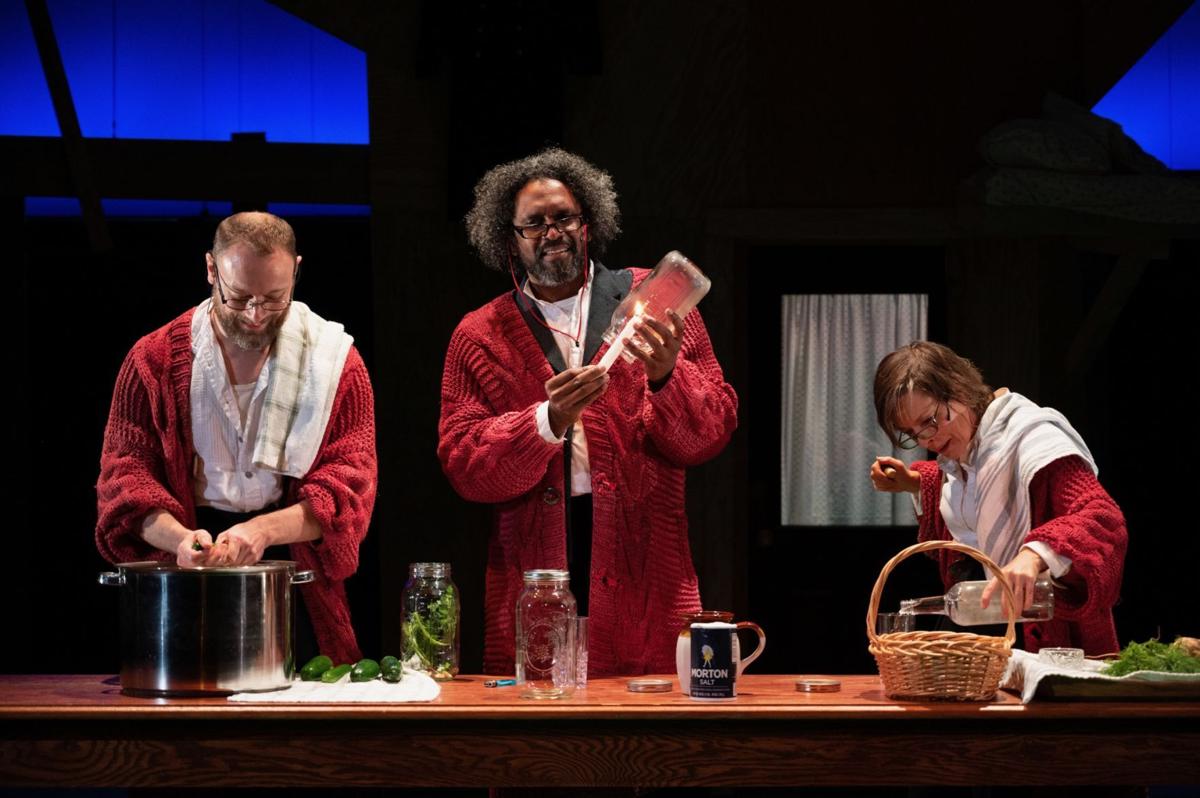 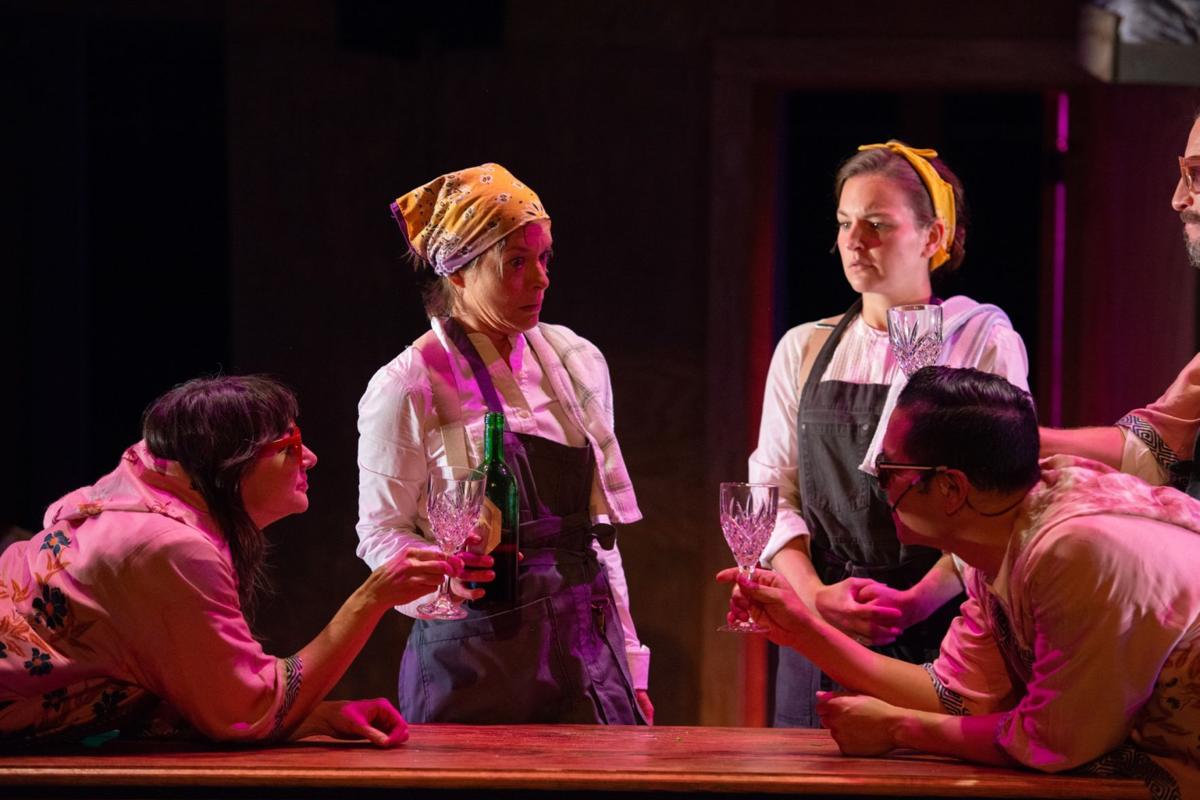 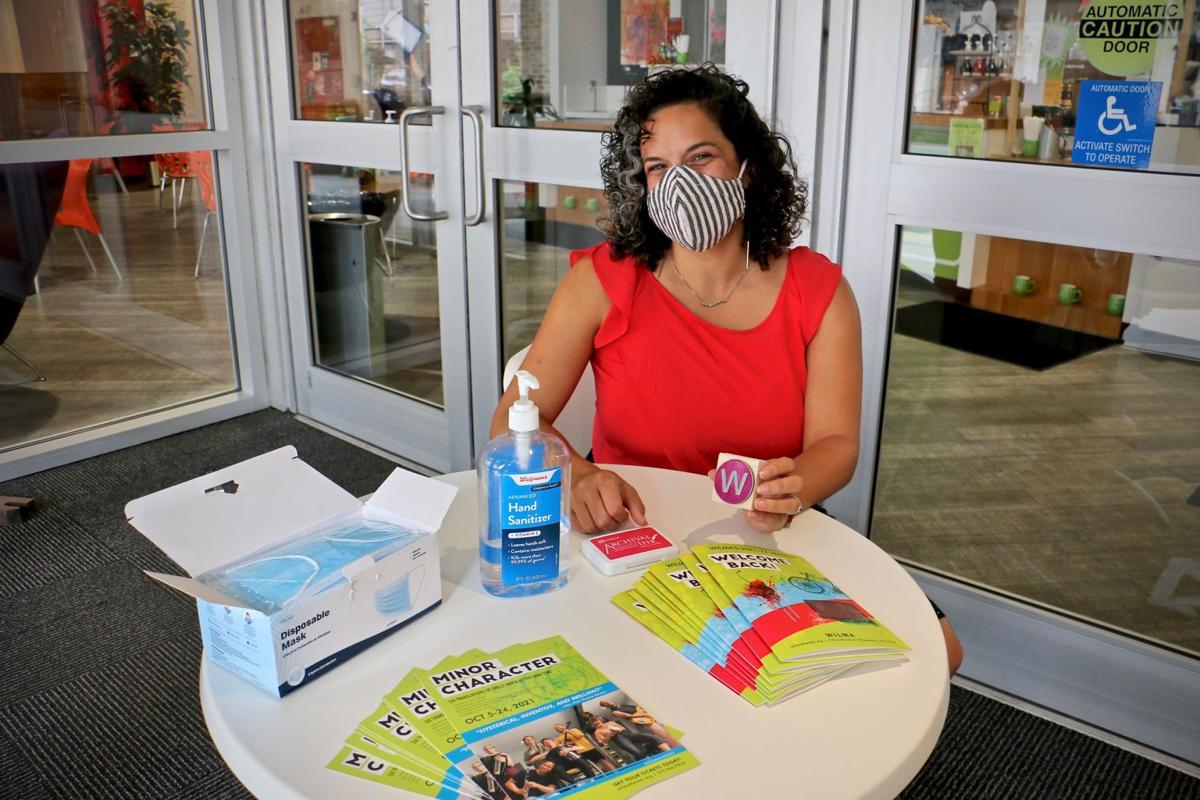 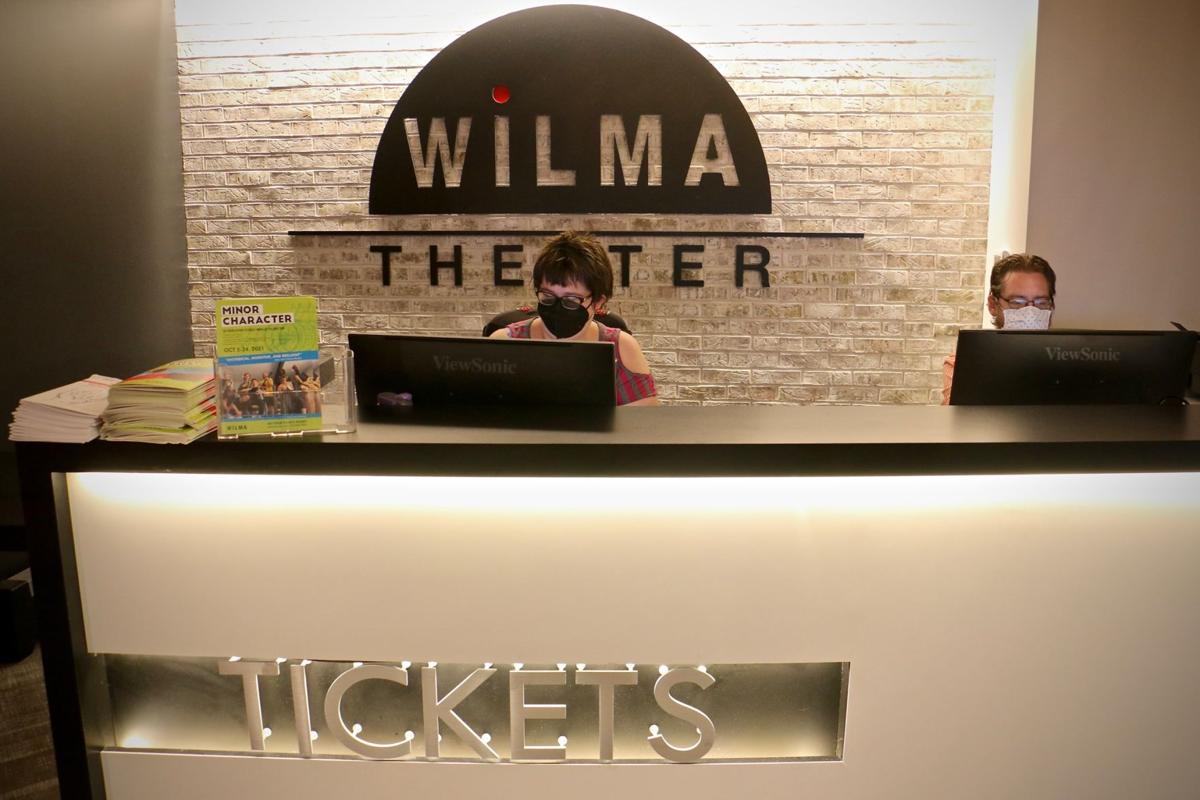 Wilma Theater will open to live performances for the first time since the pandemic with the opening of ''Minor Character.'' Only half the seats in the house will be sold for each performance to allow for social distancing. (Emma Lee/WHYY) 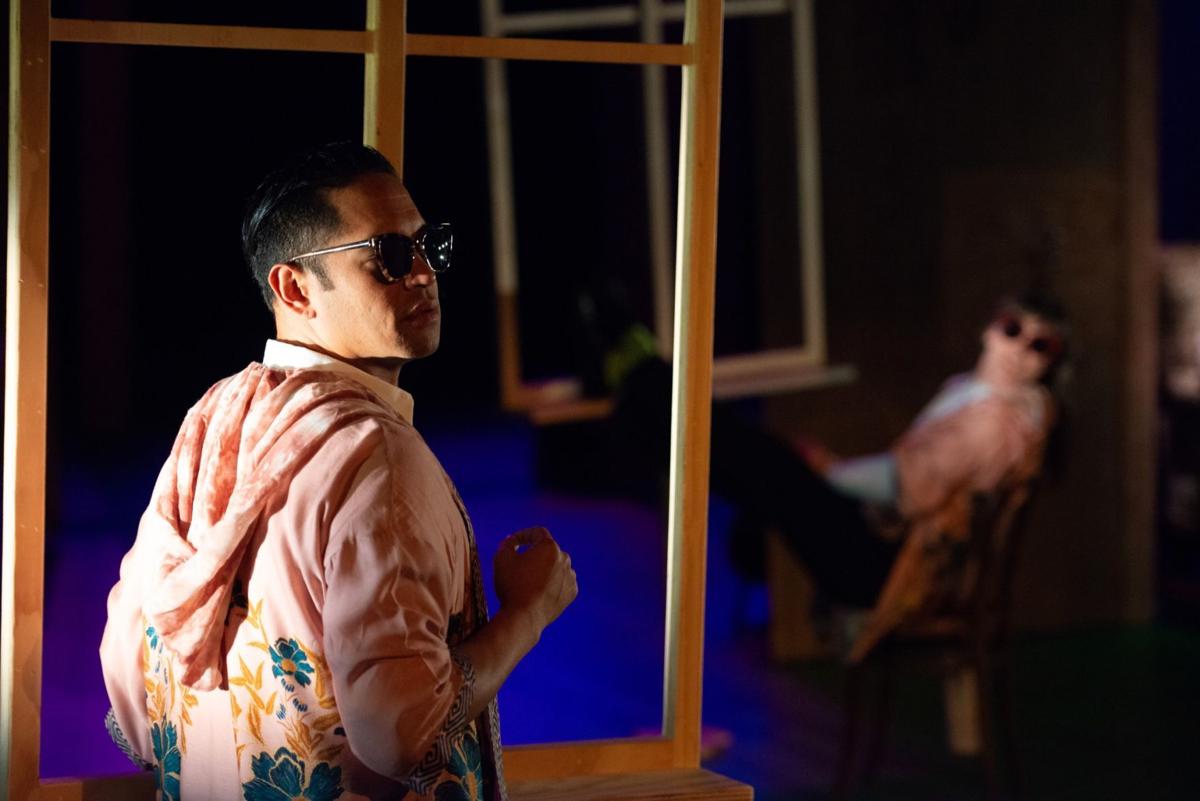 Wilma Theater will open to live performances for the first time since the pandemic with the opening of ''Minor Character.'' Only half the seats in the house will be sold for each performance to allow for social distancing. (Emma Lee/WHYY)

Philadelphia theater companies are beginning to come back to in-person performance, but in a staggered, herky-jerky fashion.

Following the recent return to live performance on Broadway, and in Philadelphia the reopening of the Kimmel Center, many of the city’s theater companies have announced their 2021-2022 seasons. Some are staging in-person performances this fall, some are waiting until early next year, and still others are in-between, coming back to theaters around the holidays with a hybrid digital model.

All theaters insist audiences be masked, but while most theaters are demanding audiences be vaccinated and saying a negative COVID test will not suffice, for others, like People’s Light and Theater in Malvern, Pennsylvania, a negative test is sufficient.

Audiences are proving to be just as confused.

The Wilma Theatre has opened the first in-person theater production on Philadelphia’s Avenue of the Arts. “Minor Character” is a farcical take on Chekov’s “Uncle Vanya,” a mash-up of the many translations made from the original Russian, including one automated script spit out by Google Translate.

The comedy features actors playing multiple roles, often trading roles mid-act, talking over each other in ways that sometimes resemble pure babble. Managing director Leigh Goldenberg said this is the perfect vehicle to return to live theater after more than 18 months separated.

“This is a group of people all figuring out together how to make a play again, and how to share space again,” she said. “It definitely has that let’s-figure-out-how-to-make-a-play feel, but with the high production quality and technical elements that the Wilma is known for.”

Other theaters will soon be following suit. On Oct. 30, InterAct will begin its run of “The Chinese Lady,” a 2019 play by Lloyd Suh about the first Chinese woman to immigrate to the U.S. in 1834.

While the play was written well before COVID-19 was a global pandemic, artistic director Seth Rozin said it addresses historic anti-Asian prejudices in the U.S. that have become more prominent over the last 18 months.

“Like everyone, I spent months inside thinking about how we got to this point and where we could go from here,” said InterAct Rozin in a statement. “‘The Chinese Lady’ embodies that introspection, deftly unspooling the roots of anti-Asian hate from the 19th century to today — while being laugh-out-loud funny and quintessentially theatrical.”

Later in November, 1812 Productions will begin performances of an original comedy, “Two Outta Three,” a play created and performed by artistic director Jennifer Childs and her husband, actor Scott Greer.

During the pandemic, their only child left home for college. In this poignant comedy, the couple imagines themselves as a vaudeville trio, now reduced to a duet.

“Even though we’re not addressing the pandemic in this piece, this is very much a piece that came out of the pandemic, being cooped up with somebody that you are close to,” said Childs. “What do you do when it’s just the two of you now? It’s like a two-man band, being stuck together on stage and looking for our next way to entertain.”

During the pandemic shutdown, Childs has tried to stay in touch with the audience she has been developing since founding the company in 2006. In addition to providing original online entertainment — a weekly comedy livestream video from Childs and Greer’s home called “I Put On Pants For This” — 1812 Productions conducted an audience survey in September to get a sense of how comfortable people are coming back to live theater.

“They reflected the ambiguity and uncertainty that everybody is feeling right now,” said Childs. “There were some people that are gung ho and, like, ‘Please open the doors now. I am there. No matter what you’re doing, I’m in the front row.’ And then there’s a healthy amount of people who are: ‘I am not ready yet,’ or, ‘It really depends on science,’ or, ‘I don’t know that I’ll ever be ready to go back to the theater.’”

The Fringe Festival was Philadelphia’s first large-scale performance art event that returned to in-person shows in September. About 160 independent artists staged shows around the city and online, 70% of those were in-person.

“We saw about 60% of the participation of a normal year,” said FringeArts program manager April Rose, adding that individual audience members tended to go to fewer shows than they would have in previous years.

“Someone that would be used to attending far more, attended slightly less than they would, which I think was a safety precaution,” she said. “Sort of like: ‘Let me go out one night, take a minute, see how I feel, make sure I don’t feel like I’m being a superspreader. Then I’ll wait and I’ll see one next week.’”

As part of the Fringe Festival this year, a group of individual artists banded together to create their own mini-festival within Fringe, the Cannonball Festival. In one central location, the Maas Building in Olde Kensington, Cannonball had both indoor and outdoor spaces for a rotation of performances every day. On weekends, performance could be seen all day and well into the evening.

Cannonball saw about 40% of its overall audience capacity.

“Given how other theatres were limiting their capacity to 40%, I think we are pretty happy with 40%,” said Ben Grinberg, a co-producer of Cannonball. “We had several shows sell out and had long waitlists for performances, especially on weekend days. We didn’t know exactly what to expect.”

Responding to an audience survey, several people appreciated the sense of community fostered at the Maas Building and the ease of going to one location for a wide variety of performances.

“It was more than just shows,” wrote one audience member on the survey. “It was a space to gather and be in community.”

The Lantern Theater, like most companies in the city, is holding off on live performance for a couple more months, but the company is still producing plays. It just released an online streaming video version of “The Plague,” a 2017 play by the English playwright Neil Bartlett. It is based on the Albert Camus novel “La Peste,” the fictional story of an Algerian city nearly destroyed by an infectious disease.

Artistic director Charles McMahon chose to produce the play because of its close similarities to the ravages of the COVID-19 pandemic.

“It is not even an analog to modern-day life. It’s, like, direct,” he said, pointing to the story’s main character, Dr. Bernard Rieux, who is troubled by his inability to effectively treat hospitalized patients.

“The words that Dr. Rieux speaks about his own experience in his private moments — that could be anyone working in an American hospital in the last year-and-a-half,” said McMahon.

McMahon is starting the Lantern’s 2021-2022 season with only digital content, waiting until December to present an in-person run of Charles Dickens’ A Christmas Carol, a one-man show adapted and performed by Anthony Lawton.

In January, the Lantern will begin its mainstage season of in-person performances, with “Fabulation, or the Re-Education of Undine,” a 2004 play by the Pulitzer-winning playwright Lynn Nottage.

“You’re putting a point on a calendar where you’re saying, ‘Here are the variables that we think we can control, and here are the things we can’t control,” said McMahon. “We’re going to read the tea leaves as best we can, and pick a point that we hope we don’t have to move again.”