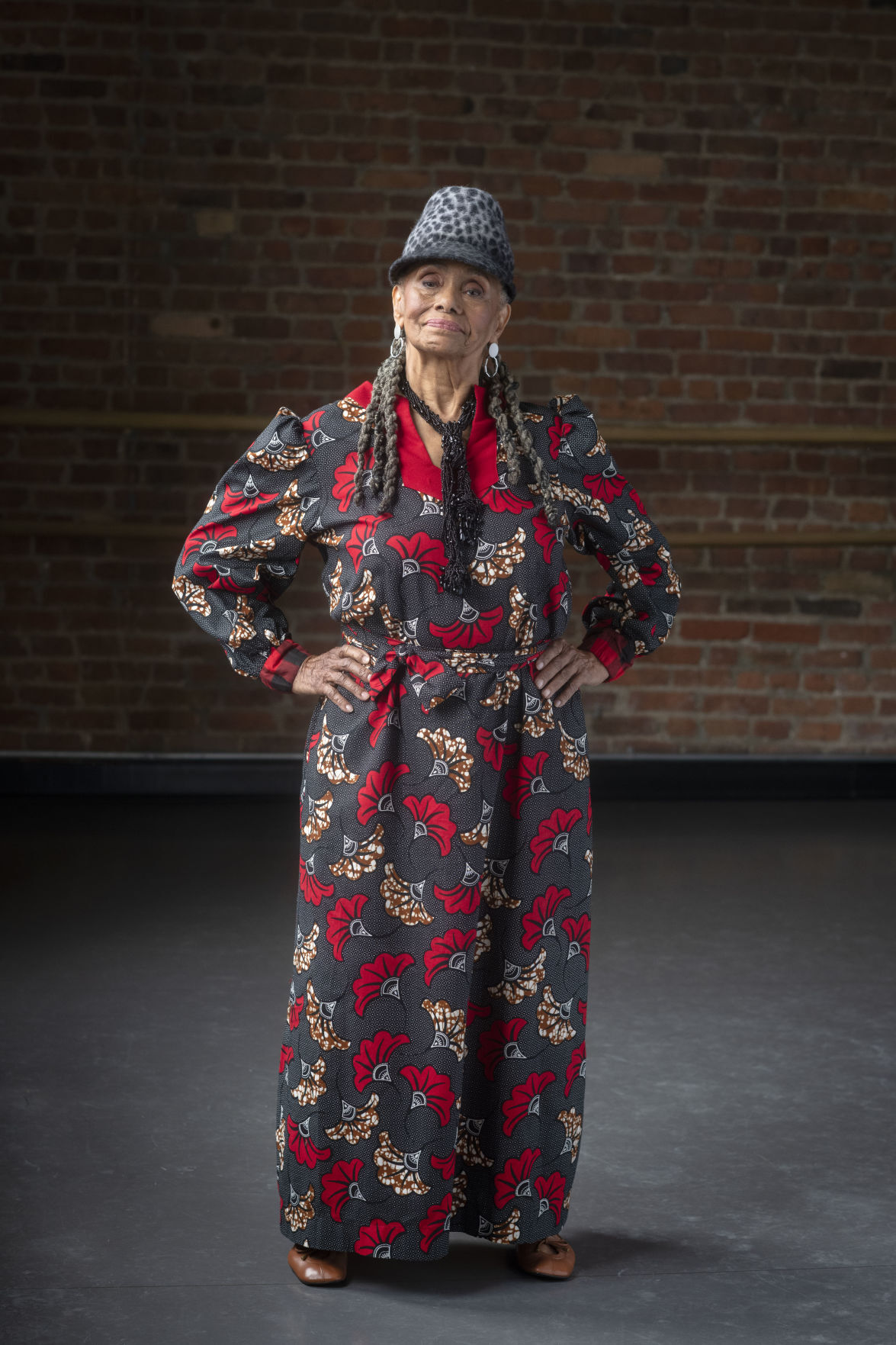 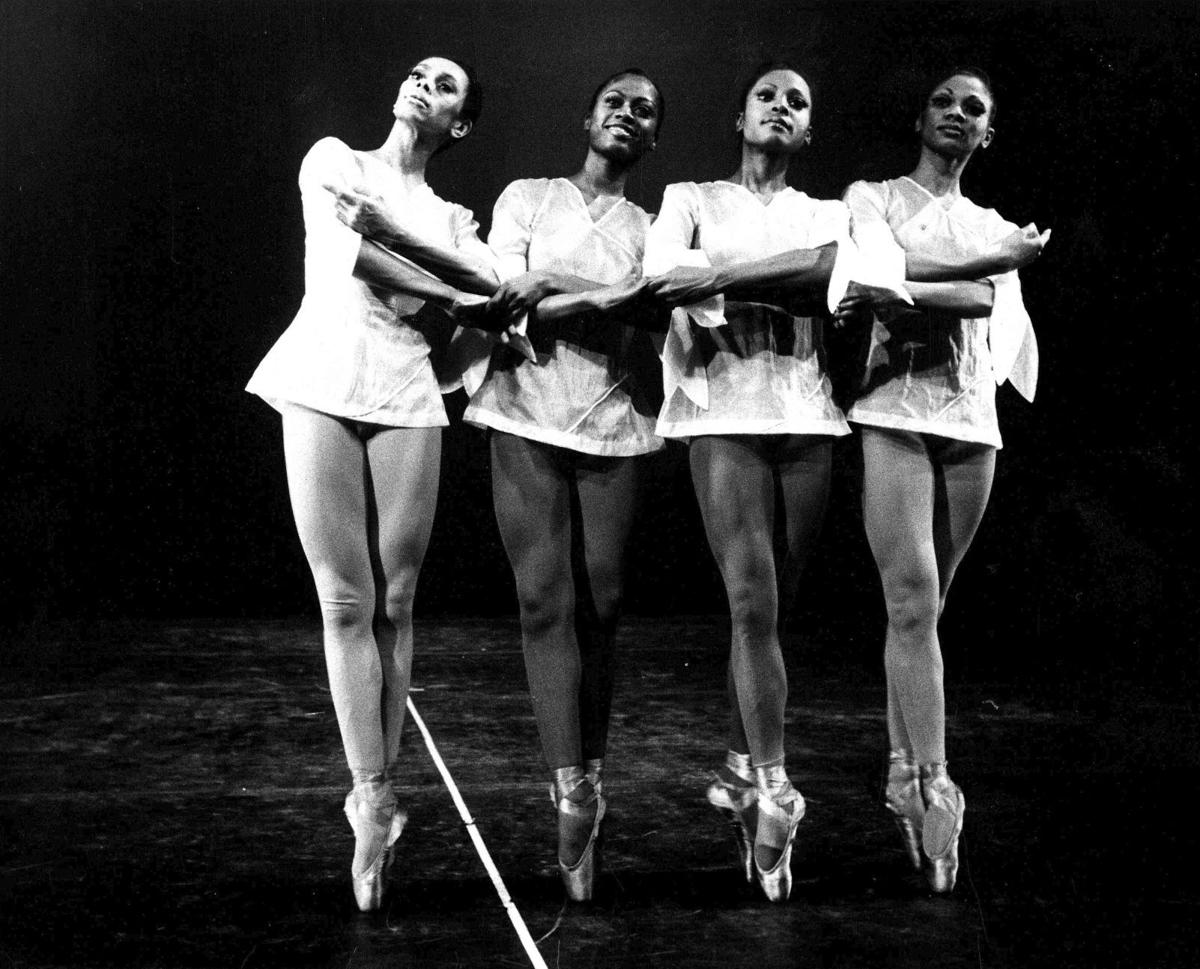 A provided image shows, from left: Sheila Rohan, Yvonne Hall, Melva Murray-White and Gayle McKinney-Griffith in Walter Raines’ “Haiku,” in New York in 1973. These early Dance Theater of Harlem stars met weekly on Zoom - to survive the isolation of the coronavirus pandemic and to reclaim their role in dance history. —Dance Theatre of Harlem Archives via The New York Times 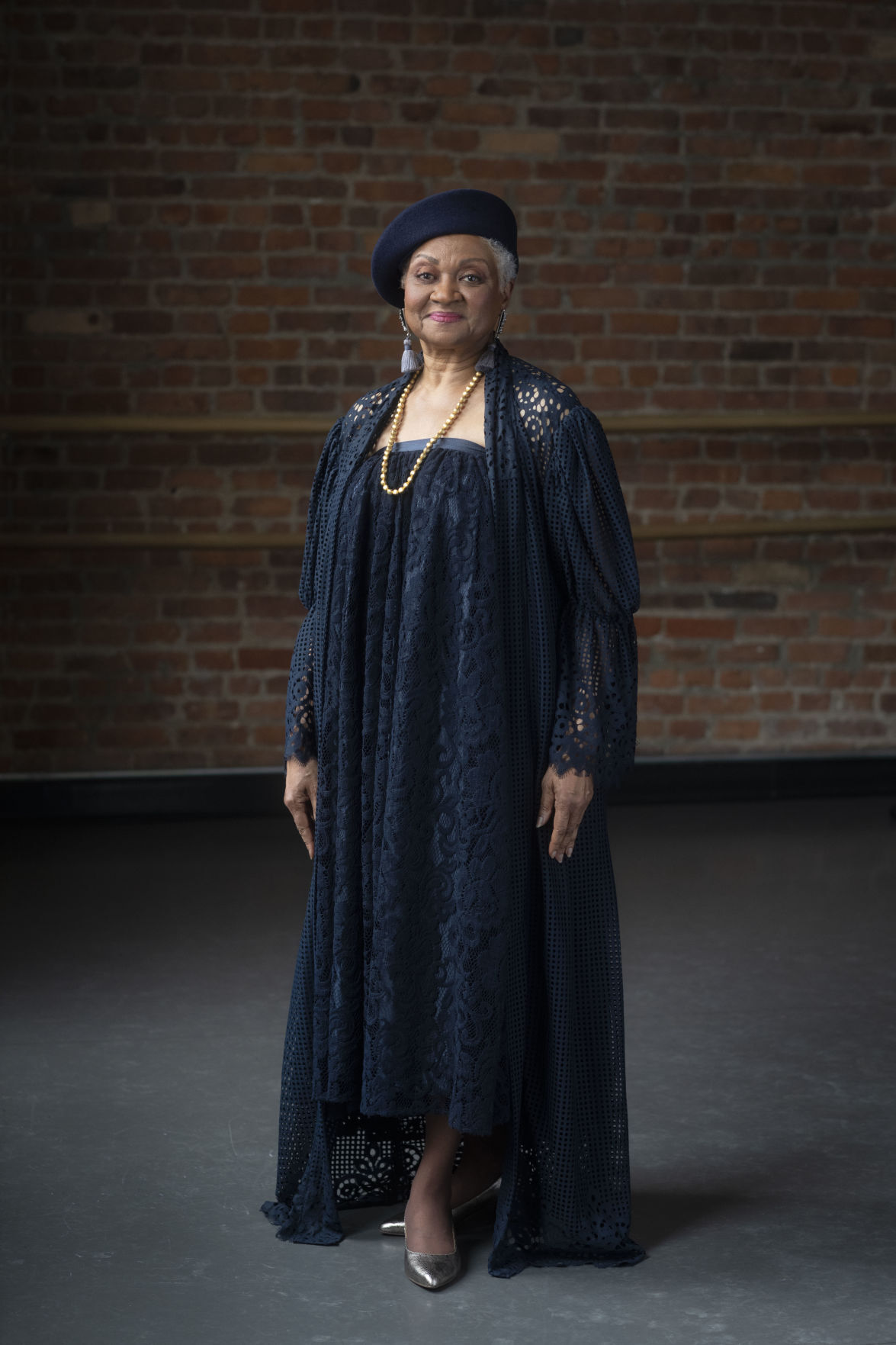 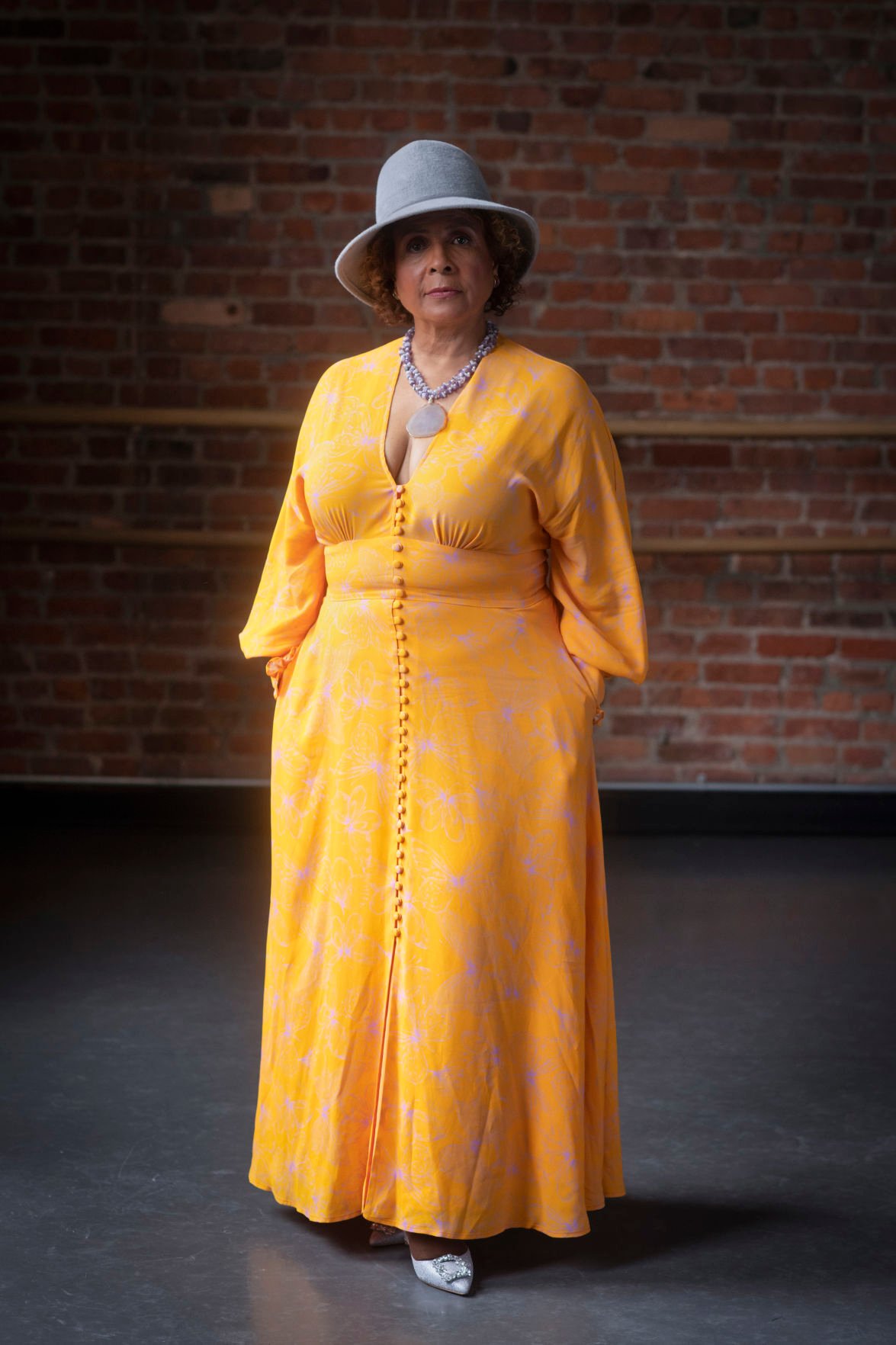 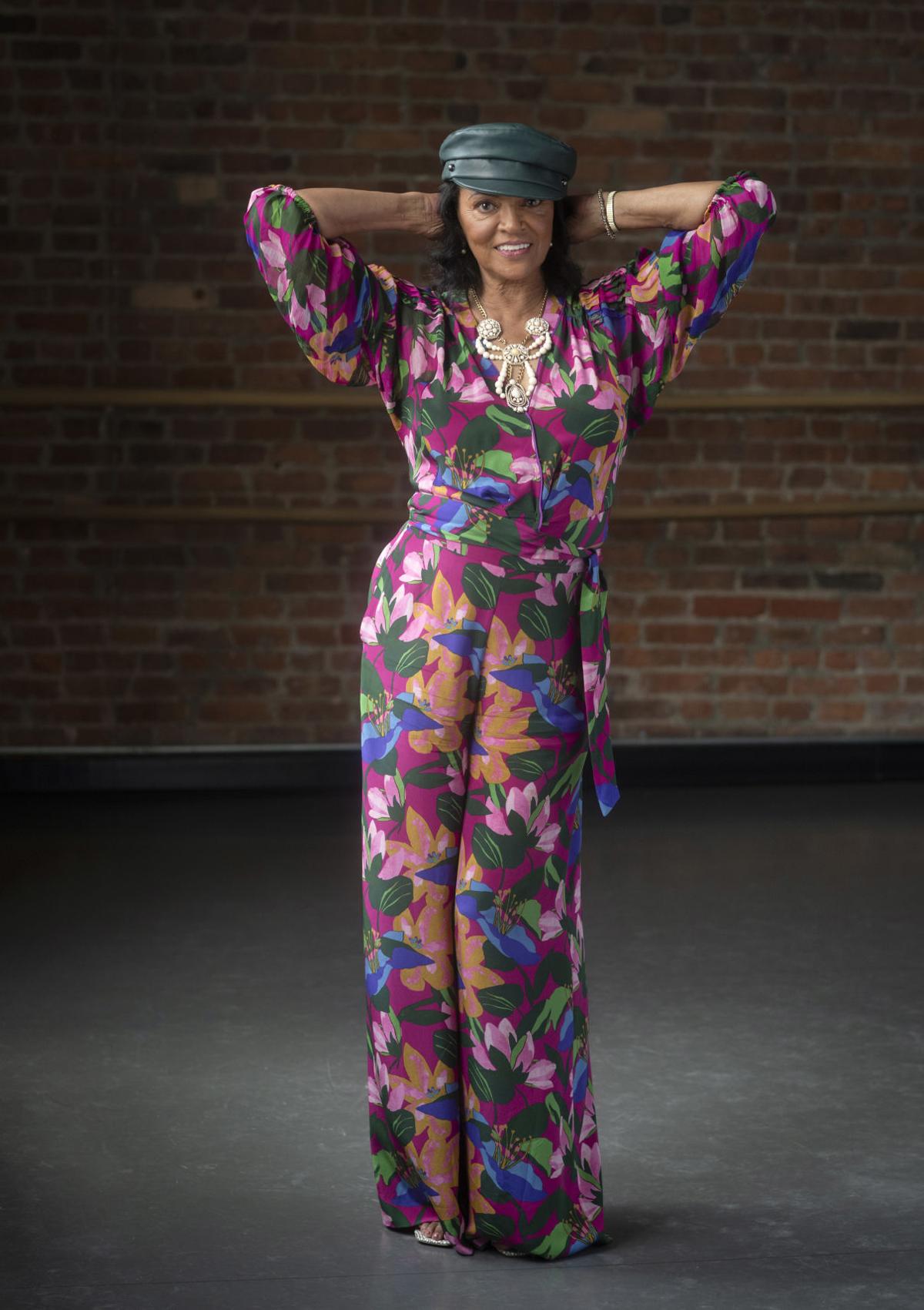 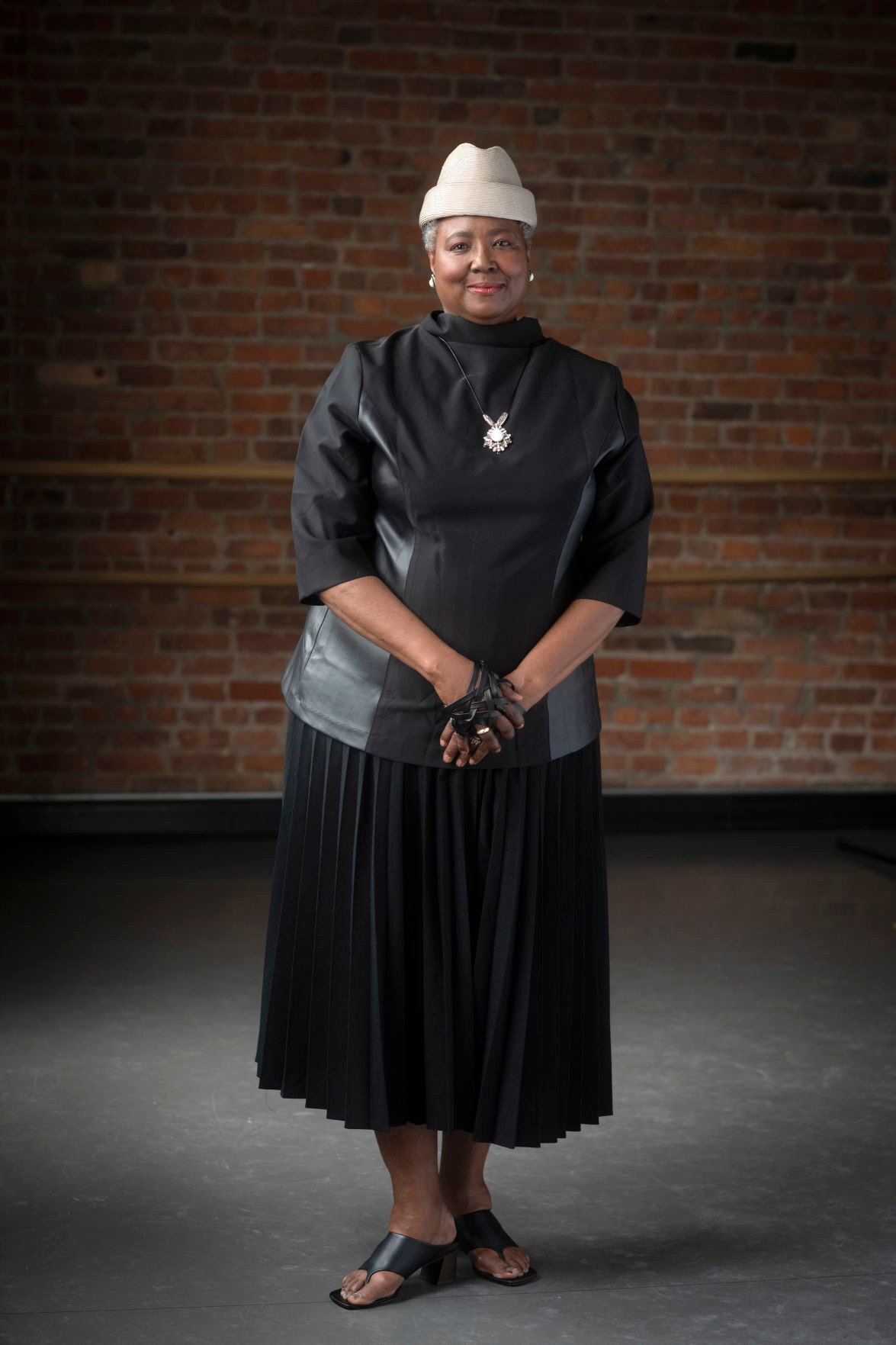 Marcia Sells, a member of the 152nd Street Black Ballet Legacy in New York, June 4, 2021. These early Dance Theater of Harlem stars met weekly on Zoom - to survive the isolation of the coronavirus pandemic and to reclaim their role in dance history.

A provided image shows, from left: Sheila Rohan, Yvonne Hall, Melva Murray-White and Gayle McKinney-Griffith in Walter Raines’ “Haiku,” in New York in 1973. These early Dance Theater of Harlem stars met weekly on Zoom - to survive the isolation of the coronavirus pandemic and to reclaim their role in dance history. —Dance Theatre of Harlem Archives via The New York Times

Marcia Sells, a member of the 152nd Street Black Ballet Legacy in New York, June 4, 2021. These early Dance Theater of Harlem stars met weekly on Zoom - to survive the isolation of the coronavirus pandemic and to reclaim their role in dance history.

Last May, adrift in a suddenly untethered world, five former ballerinas came together to form the 152nd Street Black Ballet Legacy. Every Tuesday afternoon, they logged onto Zoom from around the country to remember their time together performing with Dance Theater of Harlem, feeling that magical turn in early audiences from skepticism to awe.

Life as a pioneer, life in a pandemic: They have been friends for over half a century, and have held each other up through far harder times than this last disorienting year. When people reached for all manners of comfort, something to give purpose or a shape to the days, these five women turned to their shared past.

In their cozy, rambling weekly Zoom meetings, punctuated by peals of laughter and occasional tears, they revisited the fabulousness of their former lives. With the background of George Floyd’s murder and a pandemic disproportionately affecting the Black community, the women set their sights on tackling another injustice. They wanted to re-inscribe the struggles and feats of those early years at Dance Theater of Harlem into a cultural narrative that seems so often to cast Black excellence aside.

“There’s been so much of African American history that’s been denied or pushed to the back,” said Karlya Shelton-Benjamin, 64, who first brought the idea of a legacy council to the other women. “We have to have a voice.”

They knew as young ballet students that they’d never be chosen for roles like Clara in “The Nutcracker” or Odette/Odile in “Swan Lake.” They were told by their teachers to switch to modern dance or to aim for the Alvin Ailey company if they wanted to dance professionally, regardless of whether they felt most alive en pointe.

Arthur Mitchell was like a lighthouse to the women. Mitchell, the first Black principal dancer at the New York City Ballet and a protégé of the choreographer George Balanchine, had a mission: to create a home for Black dancers to achieve heights of excellence unencumbered by ignorance or tradition. Ignited by the assassination of the Rev. Dr. Martin Luther King Jr., he founded Dance Theater of Harlem in 1969 with Karel Shook.

Lydia Abarca-Mitchell, Gayle McKinney-Griffith and Sheila Rohan were founding dancers of his new company with McKinney-Griffith, 71, soon taking on the role of its first ballet mistress. Within the decade, Shelton-Benjamin and Marcia Sells joined as first generation dancers.

Abarca-Mitchell, 70, spent her childhood in joyless ballet classes but never saw an actual performance until she was 17 at the invitation of Mitchell, her new teacher. “I’ll never forget what Arthur did onstage” she said of his Puck in “A Midsummer Night’s Dream” at New York City Ballet during a Tuesday session in January. “He made the ballet so natural. Suddenly it wasn’t just this ethereal thing anymore. I felt it in my bones.”

Marcia Sells, 61, remembered being 9 and watching with mouth agape when Abarca-Mitchell, McKinney-Griffith and Rohan performed with Dance Theater in her hometown, Cincinnati. “There in front of me were Black ballerinas,” Sells said during a video call in April. “That moment was the difference in my life. Otherwise I don’t think it would’ve been possible for me to think of a career in ballet.”

Shelton-Benjamin left her Denver ballet company, where she was the only Black dancer, turning down invitations from the Joffrey Ballet and American Ballet Theatre, after reading a story about Dance Theater of Harlem in Dance magazine. Abarca-Mitchell was on that issue’s cover — the first Black woman to have that honor. At her Harlem audition, Shelton-Benjamin witnessed company members hand-dying their shoes and ribbons and tights to match the hues of their skin. Here, no traditional ballet pink would interrupt the beauty of their lines. “I had never seen a Black ballerina before, let alone a whole company,” Shelton-Benjamin, 64, said during a February Zoom meeting. “All I could think was, ‘Where have you guys been?’”

Finding one another back then, at the height of the civil rights movement, allowed them to have careers while challenging a ballet culture that had been claimed by white people. “We were suddenly ambassadors,” Abarca-Mitchell said. “And we were all in it together.”

They traveled to American cities that presented such a hostile environment that Mitchell would cancel the performance the night of, lest his company feel disrespected. But they also danced for kings and queens and presidents. In 1979, a review in The Washington Post declared their dancing to be a “purer realization of the Balanchinean ideal than anyone else’s.” Their adventures offstage were similarly electric, like the night in Manchester when Mick Jagger invited them out on the town. “We walked into the club with him and everybody just moved out of the way,” Shelton-Benjamin said.

Cultural memory can be spurious and shortsighted. Abarca-Mitchell was the first Black prima ballerina for a major company, performing works like Balanchine’s “Agon” and “Bugaku” and William Dollar’s “Le Combat” to raves. In an April Zoom session she said she first realized how left out of history she was when her daughter went online to prove to a friend that her mother was the first Black prima ballerina. But all she found was the name Misty Copeland, hailed as the first. “And my daughter was so mad. She said: ‘Where’s your name? Where’s your name?’ It was a wake-up call.”

While Abarca-Mitchell paused to wipe her eyes, Shelton-Banjamin stepped in: “I want to echo what Lydia said. There was a point where I asked the women, ‘Did it all really happen? Was I really a principal dancer?’ And Lydia told me: ‘Don’t do that! Yes, you were. We’re here to tell you, you were.”

Sells went on to a career that included serving as the dean of Harvard Law School, until she left this year to become the Metropolitan Opera’s first chief diversity officer. Shelton-Benjamin is now a jeweler who recently became certified in diamond grading. She, along with Abarca-Mitchell, McKinney-Griffith and Rohan, continue to coach and teach dance. They all have families, including another grandchild on the way for McKinney-Griffith, who announced the happy news to whoops on a recent call.

Dance Theater saved them from being the only one in a room. The work was so hard, the expectations so high, the mission so urgent, that those early days demanded a familial support system among the dancers. “Someone would take you under their wing and say, ‘You’re my daughter or sister or brother,’” McKinney-Griffith said. “The men did it also. Karlya was my little sister, and we kept that through the years.”

Like in any family, the relationships are complicated. The women speak of feeling shut out of today’s Dance Theater of Harlem. They are rarely brought in for workshops or consultations on the ballets they were taught by Mitchell. At his memorial service in 2018, they wept in the pews unacknowledged. “We’re like orphans,” Rohan said with a laugh in a Zoom session. “If the outside world neglects us, it seems all the more reason that Dance Theater of Harlem should embrace us.”

Virginia Johnson, a fellow founding member, is now the company’s artistic director. She assumed the helm in 2013 when Dance Theater returned after an eight-year hiatus caused by financial instability. “It makes me sad to think that they feel excluded,” Johnson said in a phone interview. “And it’s not because I don’t want them. It’s just because I can’t manage. I’ve probably missed some chances but it’s not like I haven’t thought about the value of what they bring to the company. They are the bodies, the soul, the spirit of Dance Theater of Harlem.”

“We all think about and love and respect what Arthur Mitchell did,” she added, “but these are the people he worked with to make this company.”

By the end of May, the five members of the 152nd Street Black Ballet Legacy were fully vaccinated. They traveled from Denver, Atlanta, Connecticut, South Jersey and, in Sells’ case, five blocks north of Dance Theater of Harlem for a joyful reunion. So much is different now at the building on 152nd Street. The old fire escape in Studio 3 where they’d catch their breath or wipe tears of frustration is gone. So are the big industrial fans in the corners of the room, replaced by central air conditioning. But they can still feel their leader all around them in the room. Crying, Abarca-Mitchell told McKinney-Griffith, “I miss Arthur.” (Though they all laugh when imagining his response to their legacy council. “I do believe he would try to control us,” Rohan said. “’What are you doing now? Why are you doing that? Let me suggest that. …’”)

The body remembers. In Studio 3, all Shelton-Benjamin had to do was hum a few notes of Balanchine’s “Serenade” and say “and” for the women to grandly sweep their right arms up. “These women help validate my worth,” Abarca-Mitchell said afterward. “I don’t want to take it for granted that people should recognize Lydia Abarca. But when I’m with them I feel like I felt back then. Important.”

This article originally appeared in The New York Times.