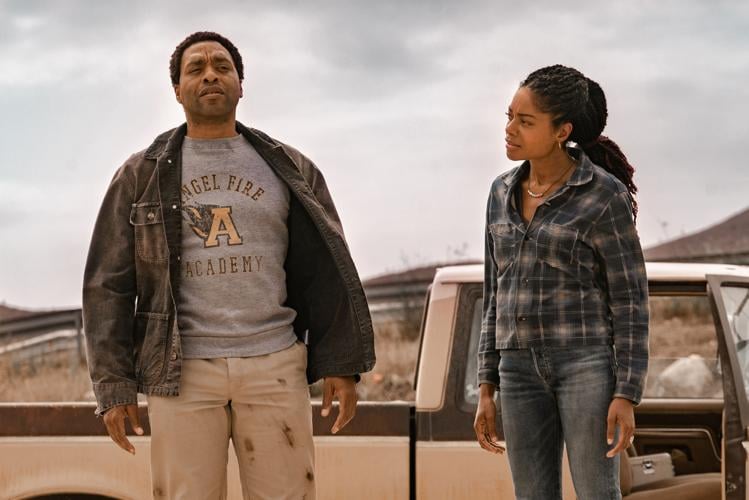 From left: Chiwetel Ejiofor and Naomie Harris in Showtime’s “The Man Who Fell to Earth” —Photo: Rico Torres/Showtime 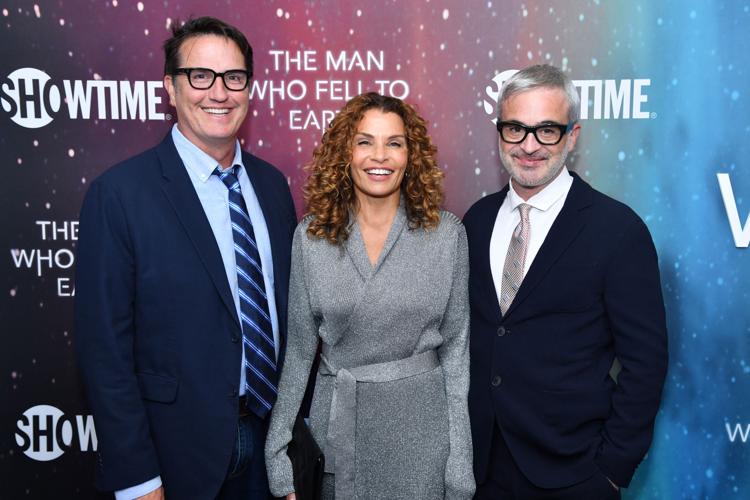 From left: Showrunner John Hlavin, and co-creators Jenny Lumet and Alex Kurtzman at the Showtime premiere of “The Man Who Fell to Earth.” —Photo: Stephen Lovekin/Showtime 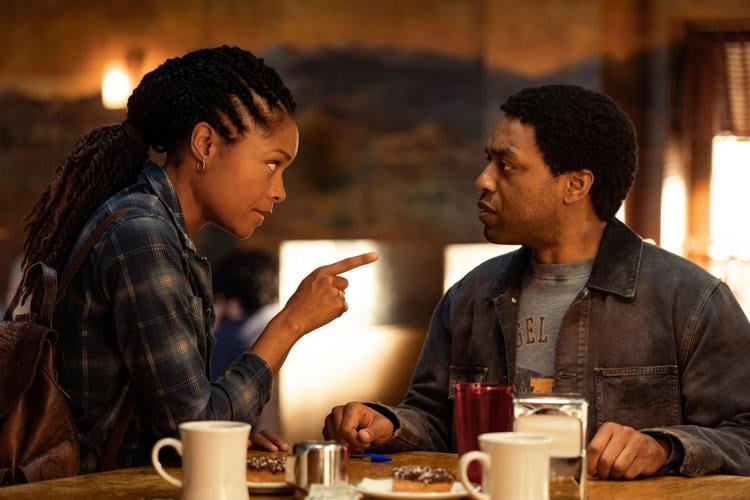 From left: Naomie Harris and Chiwetel Ejiofor in Showtime’s “The Man Who Fell to Earth.”

From left: Chiwetel Ejiofor and Naomie Harris in Showtime’s “The Man Who Fell to Earth” —Photo: Rico Torres/Showtime

From left: Showrunner John Hlavin, and co-creators Jenny Lumet and Alex Kurtzman at the Showtime premiere of “The Man Who Fell to Earth.” —Photo: Stephen Lovekin/Showtime

From left: Naomie Harris and Chiwetel Ejiofor in Showtime’s “The Man Who Fell to Earth.”

Pretend you’re an alien. You’ve just blasted to Earth on a mission to save a dying planet. You’re naked, completely alone and the folks back home are counting on you. Who in this whole wide world would you ask for help?

The creators of Showtime’s new series “The Man Who Fell To Earth,” which airs on Sunday nights, have an unequivocal answer — a Black woman.

“I would not ask an apex predator. I would ask a woman of color because she would have a pair of binoculars that nobody else has,” said Jenny Lumet, co-creator along with veteran writer-producer Alex Kurtzman of the upcoming science fiction show based on the 1963 Walter Tevis novel of the same name.

Someone who has “nothing to worry about,” as Lumet put it, has less information about the actual state of the world.

“And I am happy to duke it out about this argument,” added Lumet, whose grandmother was groundbreaking actress Lena Horne. “Women of color are one of the most vulnerable populations on the planet and that vulnerable populace has the clearest understanding of what the world actually looks like.”

The classic 1976 film adaptation of “The Man Who Fell To Earth” starred David Bowie, the original Ziggy Stardust himself. Shifting the focus to a Black woman didn’t seem risky. It made sense for both Lumet and Kurtzman.

So when Lumet and Kurtzman, who launched a production company together last year, got the opportunity to continue the trippy tale of an alien in search of some human kindness the pair knew from jump that they would zero in on a Black female character. She wouldn’t be a sidekick, a set piece or the comic relief. She would be center frame.

In Showtime’s update the hero is super-genius Justin Falls, played by Oscar nominee Naomie Harris, who teams up with an alien named Faraday, played by Oscar nominee Chiwetel Ejiofor, to get water to his thirsty planet and maybe save Earth from its own environmental apocalypse along the way. The fact that both main characters are Black is somehow neither ignored or called out. It just is.

“Diversity isn’t a benevolent exercise,” said Ejiofor. “The more we normalize the engagement of all sorts of different people in our story telling than the richer our story telling will be. You hope for the day when it’s not something people notice. When it’s totally normal to have all sorts of different people that, in fact, the opposite would be weird.”

Kurtzman is behind the rebooted “Star Trek” universe at CBS Studios including “Stark Trek Discovery,” which features the first Black female captain in the mythology’s universe. He spun the benefits of “diversity” in storytelling another way. “The more specific a story, the more universal that story becomes.”

When the audience meets Justin, she is exhausted, nearly ground to dust by a world that’s forgotten her. A brilliant scientist who’s suffered a major professional and personal loss, Justin is now working in hazardous-waste removal to support her daughter and buy her ailing father’s prescription pills from the local drug dealer. For Justin, the hero’s journey begins every morning when she opens her eyes.

Harris found something deeply familiar in that struggle.

“She reminded me of my mom, my aunts and the women I was surrounded by growing up,” said Harris. “There are so many single parents holding down draining jobs and nurturing a family. How incredibly challenging that is. There is no space for her, no self-indulgence. It’s all sacrificial love.”

There’s a quote floating around the Web and making its way onto mugs and sweatshirts that reads “F- — it, I’ll do it — Black Women.” It spells out why Justin, with so much pilling up on her paper-thin plate, would agree to help a stranger save not just one but two worlds.

“When she sees something that she knows is wrong, she cannot stop herself even if it puts her and her family in danger. It makes her a hero in a unique way,” Kurtzman said of Justin.

It’s that emotional tether that drew Harris to the project in the first place.

“I like sci fi,” Harris said. “It’d be dishonest to say I’m a huge fan. A lot of sci fi is done in such a way that the characters seem remote emotionally. What’s special about this series is how quickly you fall in love with them and want to go on their journey.”

Ejiofor agreed: “I loved the idea. I loved where it went and the ambition of it and the depth of these characters.”

Neither of the show’s two British stars are strangers to the sci-fi/fantasy genre. Ejiofor is part of the massive Marvel Cinematic Universe appearing as the sorcerer Baron Mordo in the “Doctor Strange” films, while Harris recently starred opposite Oscar-winner Mahershala Ali in the futuristic family drama “Swan Song.”

And sci-fi is waking up to power of letting Black characters breathe. HBO’s one-season wonders “Lovecraft Country” and “Watchmen” were each steeped in American racial politics. Yet it is still noteworthy that in “The Man Who Fell To Earth,” race permeates the plot but it doesn’t overpower it.

Justin is Black woman who’s been chewed up by several systems of dis-empowerment. Faraday is an alien in a new land, a lizard in a human skin suit. But you can’t forget that Faraday is a Black man in America. In the opening scene of the series, Faraday shows up naked at an auto shop in the middle of night. Police are called. Guns are drawn. The potential for racialized violence permeates every fiber of the screen, but there is no dialogue that specifically calls attention to the color of Faraday’s skin.

An early review pointed to that omission as hesitation, a fear of going there, recalled Kurtzman. But both he and Lumet said their take on race was intentional.

Lumet, who wrote the critically acclaimed 2008 film “Rachel Getting Married” and the CBS procedural “Clarice,” put a sharper point on the subject: “It infuriates me. It’s as if racism only exists when someone says the n-word or has on a white hood.”

The excuse used to explain away the lack of diversity in science fiction and fantasy — that people of color are somehow unrelatable — is just bogus, according to Lumet and Kurtzman. And by allowing their Black characters, which in addition to Justin and Faraday include Justin’s father, daughter and neighbor, to exist as they would without a sandwich board that reads “I am Black!” the writers sought to normalize the Black experience.

The audience sees Justin struggling but also sees her singing old-school tunes in her beat up truck with her family. Her neighbor dispensing self-care advice. Her father laughing. Her daughter dreaming.

“I firmly believe that every time you see a brown face on your screen that it becomes less remarkable,” Lumet said of the creators’ decision to center the story on people of color. It was made even easier with the A-list casting, she said. “When Naomi and Chiwetel respond to your material, you just get down on your knees and say thank you.”

Giving thanks when thanks are due was another reason Justin’s character was long overdue.